We’ve seen a fair few 2.1-channel systems of late, but none has been quite as audaciously stylish as the Samsung HT-X200, even taking the mouth-watering Philips HTS6600 into consideration. Also attractive is its price tag, which puts paid to the notion that good-looking kit has to be expensive.


The main unit is styled in an elegant gloss black finish and can be mounted horizontally or vertically thanks to the removable ovular stand – it looks great either way. But what really makes it stand out is the large sloping front panel that displays information using large blue LEDs. Add a minimal row of buttons and smart silver trim and you’ve got yourself one gorgeous looking system.


It is a little plasticky in places but that’s perhaps to be expected for the price, and at least Samsung hasn’t neglected the speakers and passive subwoofer, which are also gloss black and compact enough to tuck into tight spaces. 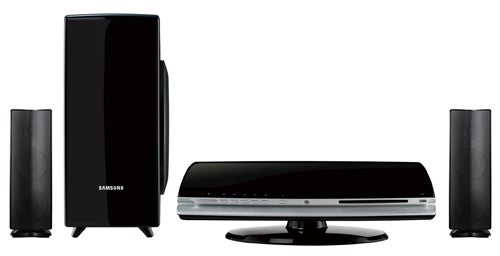 The socket offering on the rear of the main unit is odd in that there’s an HDMI output but no SCART output. While we like this forward-thinking approach, it could leave those of you with non-HDMI TVs in the lurch. There is, however, a set of component outputs, or a composite output if you’re desperate.


Owners of Sky+ and Sky HD boxes can hook them up to the optical digital audio input on the rear and enjoy beefed up TV sound through the Samsung’s speakers, and the analogue stereo output lets you pipe an audio signal to external equipment.


Being a 2.1 system, there aren’t many bits in the box, which makes set up incredibly quick and easy – we had ours up and running in ten minutes. The supplied speaker cables plug into the colour-coded terminals on the rear of the main unit, and connect at the other end using springclip terminals. Changing the position of the stand is effortless too, and doesn’t require a screwdriver.


The onscreen menu system is logical and nicely presented, allowing you to tweak its very basic array of settings without any hassle. You can activate the dynamic range compression or set an audio delay to rectify lip synch issues, but otherwise there isn’t a great deal to configure – some bass or treble adjustments wouldn’t have gone amiss.

There are a few handy features elsewhere, such as 1080i and 720p upscaling, which HD TV owners will no doubt appreciate even if the benefits are minimal. In addition, the Anynet+ HDMI CEC function makes it possible to control this system and a Samsung TV with the same remote.


But the coup de grâce is a side-mounted USB port, which turns the HT-X200 into a hub for your digital media files. The system accepts MP3, WMA, DivX and JPEG files through the USB port, but they can also be played from CD or DVD.


Also pleasing (and somewhat surprising at the price) is DVD-Audio playback, which allows you to listen to crisp hi-res music discs – though without rear channels you’ll miss out on DVD-A’s multi-channel element.


The lack of rear channels is also a hindrance if you want to experience 5.1-channel movies in all their glory, so in an attempt to compensate Samsung has included a pair of ‘V-sound’ virtual surround modes.

Rounding up the feature list is an FM/AM radio tuner, DivX video-on-demand support and a healthy range of DVD trickplay features like zoom, slow motion and repeat playback, plus a slideshow feature for JPEG viewing.


Once you’ve slipped a DVD disc into the slot, it soon becomes apparent that the HT-X200’s sound quality is no match for other 2.1 systems on the market. With the captivating ”LOTR: Return of the King” disc, the grandstanding action scenes sound harsh and overly aggressive, with too much emphasis on the top end frequencies. With the volume cranked up high, the clanking swords and screeching Nazgul effects go right through you, and not in a good way – the system grabs you, roughs you up and spits you out, leaving you praying for the next quiet dialogue scene to come along.


Its limitations are compounded by the ineffective virtual surround modes, which fail to throw the surround effects wide enough to make the soundstage seem adequately spacious. This confines the entire output to the front and compromises the clarity of dialogue.

There are some redeeming features, however, such as the subwoofer’s hearty bass output. It’s a little wild at times, lacking the control shown by pricier bass-boxes, but it packs just the right amount of muscle to make those crunching Middle Earth fight scenes sound suitably exciting, even if the front speakers don’t keep up their end of the bargain.


And for a £240 system, the quality of DVD-Audio playback is impressive, with our 48kHz/24-bit jazz test disc sounding sharp, clean and controlled – highlighting that the system is perhaps more at home with music than movies. 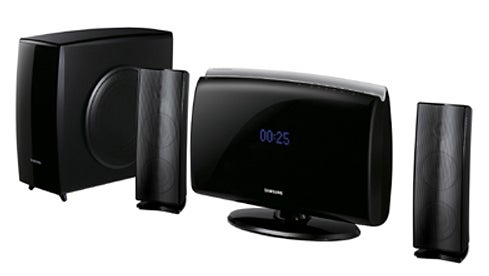 Moving back to DVDs, picture quality is solid rather than spectacular. Colour reproduction is rich and realistic, motion is smooth and there’s a pleasing lack of digital noise, though with the upscaling set to 1080i, images seem just a touch softer than we’re used to. Nothing major, but it stops the deck reaching the heights scaled by rival 2.1 systems.


In terms of digital media playback, the system shows no weaknesses, with smooth, glitch-free reproduction of our test DivX, MP3, WMA and JPEG files.


To us, it seems as though Samsung spent too much time perfecting the HT-X200’s (admittedly gorgeous) design and not enough time tweaking its sound quality. If it had, we could have had a bona fide bargain on our hands, but despite those jaw-dropping looks and its generous feature list, this system is a big disappointment.