If we’re being blunt, most flatpanel TVs provide terrible sound quality, but not everyone has the cash or the space to upgrade to a full home cinema system, while others simply don’t like the thought of cables messing up their carefully planned interior decor.


Dilemmas like these have created a strong demand for single-unit, wall-mountable speaker systems (or ‘soundbars’) that deliver powerful sound quality without making unreasonable demands on your living environment, or in the case of Samsung’s HT-WS1G, your wallet.

This 2.1-channel system (oddly dubbed ‘Crystal Surround Air Track’) can be yours for under £260, but even at this tempting price Samsung hasn’t compromised its usual design principles and aesthetic attention to detail – the HT-WS1G is pure eye candy and covered in clever touches.


The soundbar itself is incredibly slim and compact – much more so than most rivals – which makes it a breeze to wall-mount. Its one-metre width is exactly the same as a Samsung 40in TV, and the lustrous Platinum Black finish matches the company’s sets perfectly, so when mounted below one the effect is stunning. But if you’d rather place it on a flat surface then it comes with a transparent stand that clips onto the bottom.

Samsung clearly didn’t want to ruin the look by plonking a bright display panel on the front, so instead the unit features an array of subtle lights that disappear when idle. On the left side is a vertical row of blue lights that indicates the volume level, while on the right are two small LEDs that light up either red, green or blue depending on the audio format being received and the selected sound mode. Also on the right are touch-sensitive volume and power controls. 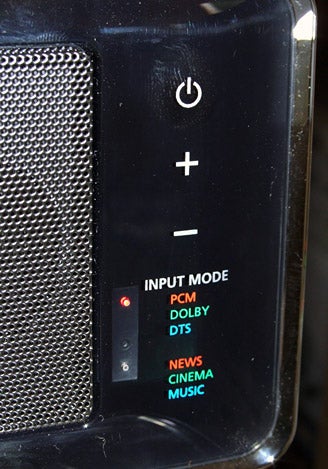 Also in the surprisingly large box, which contains more polystyrene than AV kit, is a subwoofer. Not only is this bass box powered (always preferable from a performance point of view) but it’s also wireless, which minimises the amount of cables needed and lets you place it anywhere in the room regardless of where the soundbar is installed. But this is one sub you won’t want to tuck away in a corner – its gloss-black top panel and curved edges make it easy on the eye, while its build quality is admirably robust. 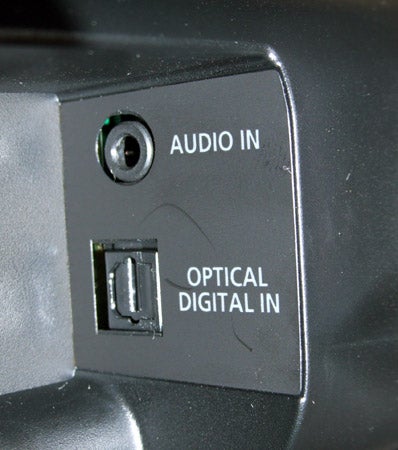 On the back of the main unit are just two inputs, which keeps things simple but doesn’t provide much flexibility if your player’s outputs don’t match. You get an optical digital audio input that accepts Dolby Digital, DTS and PCM streams, but you’re screwed if your deck only sports a coaxial output. An analogue minijack serves your other stereo sources, for which you’ll need an adapter cable. Needless to say the lack of HDMI inputs and HD audio decoding is a shame, but a bit much to ask at this price.


To spice up stereo sound, there’s a selection of three sound field modes – News, Cinema and Music – which lend different characteristics to the sound depending on the content, or you can bypass them.

Rigging up the system is a piece of cake. Obviously some DIY is required for wall-mounting but the bespoke bracket makes the process straightforward. Once installed all that’s left to do is connect the optical cable from your player and plug both components into the mains. The wireless sub should pick up the wireless signal from the box straight away, but if not there’s an ID set button on the back to reset the connection. There isn’t any way of tweaking the levels, so you have to take the sound as it comes.


The system is supplied with a decent remote control, which is short and stumpy yet ergonomic, and boasts good button placement and foolproof labelling. Most of the zapper’s buttons are actually designed to control a compatible Samsung TV, which is an added bonus if you’re suffering from remote overload. 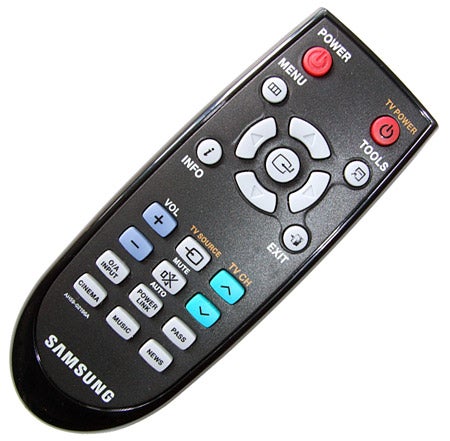 To check out the HT-WS1G’s audio chops, we rigged up our DVD player via the optical input and let it rip with ”Independence Day’s” 5.1-channel Dolby Digital soundtrack. It delivers a swift, stirring performance with the movie’s raucous action scenes, expressing high frequencies with plenty of snap and mustering a respectable but not foundation-shaking amount of low-end rumble.


As the alien spaceships obliterate Earth’s monuments, the explosions sound solid and meaty, while other sudden effects like gunfire and smashing windows sound sharp but not abrasive. The dramatic score is conveyed with drive and urgency too, and the decent midrange handling results in clearly articulated dialogue.

The trouble is, to get the full impact you need to turn the system’s volume up to the maximum, but when you do it still feels like it’s holding back – there’s no way of pushing it to truly wall-shaking levels. With a claimed 260W blasting into the room, the sound is certainly a lot more powerful than your average TV speakers, but it doesn’t get as loud or dynamic as other soundbars we’ve tested. Also, there’s absolutely no surround presence at all despite the supposed inclusion of a virtual surround mode, but that’s not unusual for a soundbar.


The HT-WS1G feels right at home with music material. The retro-soul of Daniel Merriweather’s ”Love and War” on CD is treated to a vibrant and rhythmic rendition, dripping in crisp hi-hats, sharp brass and punchy beats.


We immediately fell in love with the HT-WS1G’s unique design, in particular the touch-sensitive controls and wireless subwoofer, which makes for a neat, cable-free installation. It’s supremely stylish as most Samsung products are, and while its sound quality is generally impressive, it’s not quite powerful or expansive enough to challenge the more potent movie performance of soundbars from B&W, Denon and Marantz. It could also do with a few more connections on the back, but if you can live with these drawbacks then this is a great-value way of upgrading from your TV’s speakers.