The HT-H5500 is a budget home cinema system that packs a 3D Blu-ray player, 1000W amplifier and 5.1 speakers into a single box. Systems like these are a godsend for anyone without the patience or budget to shop around for separate components.

At £250, it’s cheap as chips, but with a heaving feature list and living-room friendly design it’s shaping up to be great value for money – provided its performance isn’t a disaster, of course.

The key design feature of the HT-H5500 is the use of compact satellites across the board, making them easy to accommodate in the living room. Unlike Samsung’s imposing tallboy speakers (as used by the flagship HT-H7750W) these cute little boxes will sit discreetly on furniture or shelves without bringing much attention to themselves.

However, if you have room for something bigger, then Samsung sells a version of this system (HT-H5550) with four floorstanding speakers for an extra £80. 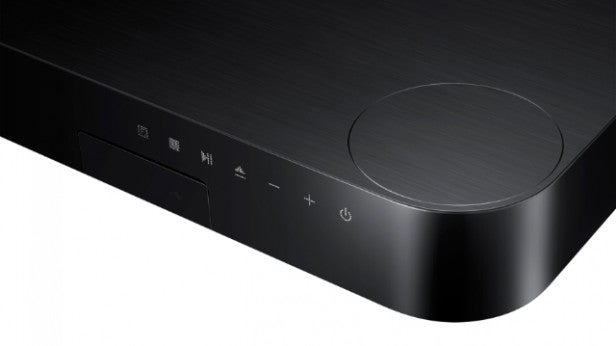 The front speakers measure 146mm high, some 30mm taller than the rears, but all four satellites sport the same gleaming gloss black finish, hexagonal shape and metal mesh. Aside from the plasticky finish, build quality is solid. The 227mm-wide centre speaker is identically styled but turned on its side for easy placement under the TV.

At 350mm high the passive subwoofer is pleasingly compact and looks natty enough with its gloss black finish and chiselled front panel, but the exposed chipboard on the back is never a good look and the lightweight construction doesn’t fill us with confidence.

Like the speakers, the Blu-ray receiver is styled in an attractive gloss-black finish and looks just like one of Samsung’s latest Blu-ray players (although it’s slightly chunkier). Design flourishes include a curved right-hand corner, a brushed top panel (bearing the NFC logo) and a row of touch-sensitive controls on the front. Also on the front is a panel hiding a USB port for flash drive media playback.

The socket selection on the rear panel is limited compared with the HT-H7750W, but that’s unsurprising given the price difference. You get a single ARC-compatible HDMI output, which is handy if you want to listen to your TV’s built-in tuner without having to rig up extra cables. But the lack of HDMI inputs makes it tricky to run games consoles and TV receivers through the system – you’ll have to make do with the analogue, optical digital or ARC inputs, which isn’t particularly convenient.

Completing the socket line up are an Ethernet port and FM radio antenna input. The speaker terminals on the back accommodate colour-coded cable plugs, which click securely into place.

The HT-H5500 makes up for its limited sockets with generous wireless connectivity. Not only is there built-in Wi-Fi, which makes it easy to access Samsung’s internet content and stream files over a home network, but there’s also Bluetooth with NFC, Wi-Fi Direct and Screen Mirroring.

Being one of Samsung’s cheaper systems, the choice of internet content isn’t up to its usual exhaustive standards. You get BBC iPlayer, BBC News, BBC Sport, YouTube, Netflix, KnowHow Movies, Dailymotion, Facebook, Twitter, Flickr, Picasa, AccuWeather.com and Hotlist Internet TV, plus the Opera TV Store. Not a bad selection, but without its usual trump cards – ITV Player, 4OD and Demand 5 – it’s on a level playing field with the likes of LG, Sony and Panasonic.

Of course there’s no DTS Neo:Fusion II this time round but there is a range of DSP modes, including Cinema, Music, Game, Power Bass, Loudness and Night. Bring up the Tools menu during playback and you’ll also uncover Normal, Movie, Dynamic and User picture modes, the latter allowing you to adjust the brightness, colour, contrast and sharpness levels.

The system also decodes Dolby True HD and DTS HS Master Audio, kicks out 1000W of power and plays 3D Blu-ray discs. There’s no dual core processor, no valve or GaN amplifiers, no multiroom support or web browser – but again, these cutbacks are explained by the rock-bottom price.

With no tallboy speakers to assemble, installation is a breeze. The colour coded plugs and springclip terminals on the back of each speaker make cable connection simple, and their compact size makes them easy to place.

Onscreen setup is equally simple thanks to Samsung’s lively, straightforward presentation, which uses helpful graphics for Wi-Fi and speaker configuration. Every option is clearly labelled and the thorough setup menu explains what each option means at the bottom of the screen. 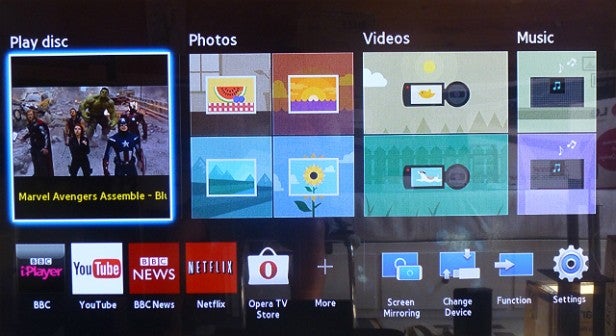 Samsung’s now familiar Home menu is made up of a several large panels labelled Play Disc, Photos, Videos and Music. Along the bottom are tiles for five recommended apps and icons for Screen Mirroring, Change Device, Function and Settings. When a Blu-ray is loaded, a thumbnail appears in the Play Disc panel, which is a nice touch.

To find your content, select the relevant source in the ‘Change Device’ menu at the bottom. You can then explore content on that device using the Photos, Videos and Music options at the top. Media is displayed in a series of slick, colourful menus with available cover art and metadata.

The Functions menu lets you switch between digital and analogue inputs, FM radio and Bluetooth. We really can’t praise this system’s usability highly enough, but then we’d expect nothing less from a product aimed at beginners.

The remote plays its part too. Its buttons are large, responsive and clearly labelled, while the sensible layout ensures hassle-free menu navigation. Our only complaint is that the volume buttons could be more prominent – they’re placed right at the top and blend in with the surrounding buttons.

The HT-H5500’s sound quality is exactly what we expected for the money – loud and exciting but lacking the finesse and composure needed to blow us away. But for £250 it’s a decent effort and will be a revelation to anyone making the step up from weedy TV speakers.

Playing the explosive climax of Avengers Assemble on Blu-ray, the HT-H5500 attacks the carnage with aplomb. There’s a crisp, snappy tone as the Chitauri demolish buildings and cars, and when their huge mothership lumbers into view the subwoofer’s deep rumble hints at its size and heft.

But push the volume over half way and the scene exposes the system’s problems. When Hulk slams his fist into the ship and it crashes to ground, the huge explosions and crunching metal sound coarse. And when one of the aliens pulls off his mask and screeches, it’s hard on the ears.

You get the impression that the satellites’ small full-range drivers are really being pushed to the limit, and their lack of cabinet volume doesn’t help their cause.

What’s more, high-frequency reproduction is lacklustre – you can make out high-frequency effects like smashing windows and Iron Man’s hissing jet engines, but it fails to tease out the finer details you’d get from a better system. Dialogue also sounds a little ripe and there’s no light and shade to the subwoofer’s performance – it’s either rumbling or it’s not.

If it sounds like we’re being hard on the HT-H5500, we’re simply pointing out the compromises you can expect to make in exchange for that bargain basement price tag. But there’s no denying that the HT-H5500 delivers an entertaining performance for the money, making movies sound bigger and louder than any TV – and for many budget buyers that’s the bottom line.

The HT-H5500 is also a fine picture performer. It makes the bold comic book colour palette of Avengers Assemble look absolutely dazzling, from the deep blues of Captain America’s suit to Hulk’s perfectly-judged green skin. The depth and vibrancy of these colours, combined with the deck’s outstanding detail clarity and smooth tonal gradation, results in utterly captivating pictures whether you’re viewing in 2D or 3D. 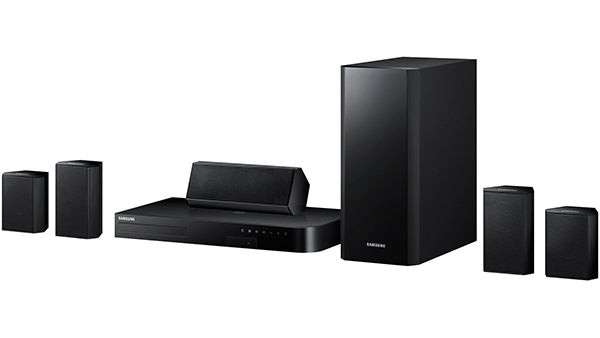 The HT-H5500 is a cheap and cheerful all-in-one system that offers impressive features for the money and a snazzy compact design. The fact that you’re getting a full 5.1 system for the same price as a soundbar makes it terrific value for money, particularly with such an appealing feature list. The lack of HDMI inputs and limited catch-up TV apps is a shame but not surprising.

Inevitably there are compromises to be made in terms of sound quality – it sounds wild at high volumes and lacks detail – but its enjoyable performance still puts any TV to shame. So if you want a full 5.1 system on a tight budget and don’t mind making a few sacrifices the HT-H5500 might be worth a punt.

It’s rough round the edges sonically, but with a busy feature list, snazzy design and a slick operating system the HT-H5500 could be worth a punt for £250.

Next, check out our pick of the Best soundbar