Playing movies like The Hobbit and Troll Hunter on Blu-ray, we soon realised that the Samsung HT-F9750W is a wildly entertaining performer, tackling HD audio soundtracks with superb clarity and aggression. 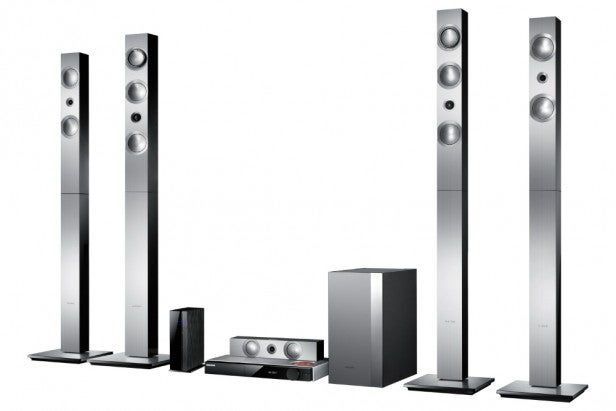 Skipping straight to The Hobbit’s Stone Giants battle in chapter 21, the HT-F9750W easily makes the scene feel epic in scale. Not only is it capable of going insanely loud with only a couple turns of the knob, it also conveys effects with effortless force – rocks crash together with a sharp crack and a thunderous boom, and there’s a sprightly whoosh as debris tumbles past the camera.

It’s not always the smoothest listen, getting a little edgy with the volume up high, but on the whole it’s more composed than most all-in-one systems.
But what really stands out is the Samsung’s meticulously crisp detail presentation. Every scene is peppered with high-frequency textures, which makes the action feel open and airy.

For example, as Troll Hunter’s camera crew flee the three-headed beast through the woods, the crunch of leaves and twigs underfoot is remarkably crisp. Similarly, shots of Radagast tending wildlife in The Hobbit are accompanied by delicately chirping birds and snuffling animals.

Admittedly not everyone will enjoy this precise and fussy sound, but there’s enough presence in the midrange and bass departments to balance it out – plus you can always tweak the sound using the equaliser in the setup menu.

As for sound processing, DTS Neo-Fusion does a wonderful job of spreading the soundstage both upwards and outwards. This is clearly demonstrated in The Hobbit as the group traipses through the rain – switching 3D Sound to ‘High’ makes the hissing precipitation seem like it’s coming from above you. If you find it too full-on, the ‘Low’ setting has a more natural effect. 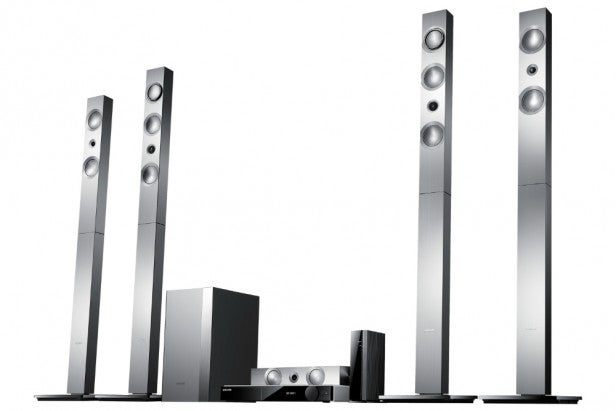 Our only issue with 3D Sound/Neo-Fusion is that it seems to boost high frequencies, making the sound even more treble-heavy. And music lovers shouldn’t touch it with a barge pole, as it makes songs sound odd and unfocused – stick to straight 2.1 and music is very enjoyable indeed.

But back to the good stuff, and the HT-F9750W’s thrilling performance is bolstered by stellar work from the sub, which injects tight bass into the soundstage without overpowering the speakers or lingering longer than it should. And dialogue comes through clearly, whether it’s the booming vocals of a mountain troll or the squawky tones of a goblin.

Even without Neo-Fusion’s trickery, the soundstage is expansive, while the system steers effects during action scenes with terrific speed and smoothness.

As for pictures, the Samsung HT-F9750W does what you’d expect any Blu-ray player to do – pass on the digital 1080p signal to a TV cleanly with no interference.

There’s a handful of picture presets on board if the regular picture isn’t quite to taste (Dynamic, Movie and User – the latter allowing you to tweak sharpness, noise reduction, contrast, brightness, colour and tint) but in Standard mode the visuals are stunning.

The 2D version of The Hobbit looks extremely sharp and poised – particularly during shots of Mirkwood or Goblin Town – while the 3D version boasts a mesmerising sense of depth. The system also does a good job with the Silicon Optix HQV disc, picking up the various cadences quickly and rendering moving diagonal lines without jaggies. 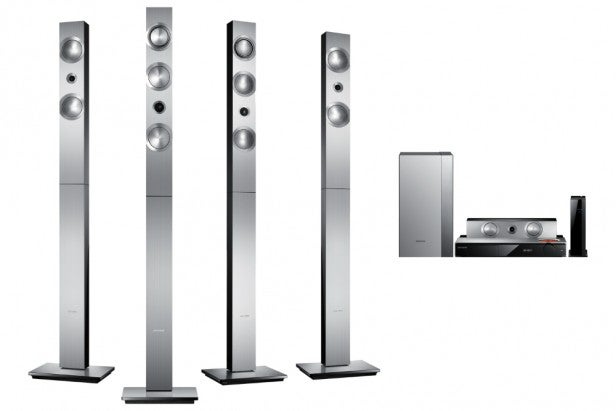 The HT-F9750W is a formidable home cinema system, living up to its flagship status in every way. In terms of features it leaves no stone unturned, offering cutting-edge audio trickery, wireless functionality galore and the best range of internet content on the market.

We’re also impressed by the design, which may bear traces of cost-cutting but it’s still more stylish and luxurious than most all-in-one systems.

Audio performance is also a triumph. It’s remarkably powerful and detailed, while Neo-Fusion expands the soundstage brilliantly through those extra drivers. Musically it does a good job, provided you leave the processing well alone.

The big problem, however, is the price. At around £1,500, it costs twice as much as flagship systems from LG and Panasonic, which is a massive jump in anyone’s book.

Granted, the HT-F9750W’s feature list is better than both systems but we’re not convinced that’s enough to justify paying double the price, particularly as there isn’t a massive step-up in performance from those rival systems.

But in its own right, the HT-F9750W is a first-class all-in-one system, bursting with quality and innovation, which makes it worthy of recommendation despite the price.

Samsung’s flagship all-in-one system looks stylish, sounds great and spoils you with features, but at twice the price of the competition you may struggle to justify the extra expense