Such is the breadth of the Samsung HT-F6500’s feature list, it’s probably easier to list the things it doesn’t do, so we’ll keep it snappy. Most exciting is the range of network features, including internet apps and DLNA-certified streaming of music, video and photos across a home network. 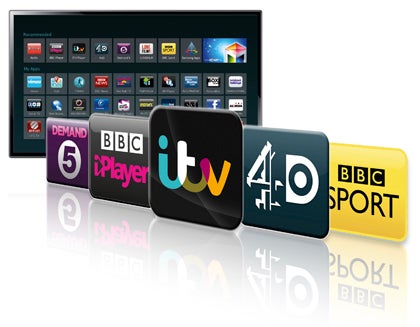 But these aren’t just any old internet apps. Samsung goes for quality and quantity with a vast selection that includes all four terrestrial free-to-air catch up TV services – BBC iPlayer, ITV Player, 4OD and Demand 5 – plus on-demand movies from LoveFilm, Netflix and Blinkbox.

There’s also a Films and TV Shows section where you can browse a range of on-demand content. Samsung’s S-Recommendation feature learns your viewing habits over time and displays relevant content on the home page.

DLNA streaming is quick and cooperative, with support for a wide range of video and music formats when used in conjunction with Samsung’s Allshare software rather than Windows Media Player. We were able to play AVI, XviD, DivX HD, AVCHD, MKV, MP3, AAC, WMA, WAV and JPEG. The HT-F6500 also plays these formats from storage devices connected to the USB port.

On the audio side, the system kicks out a total of 1000W and decodes every Blu-ray and DVD audio format going. There’s a wealth of audio modes too, headlined by DTS Neo:Fusion, a combination of DTS’ Neo processing and Samsung’s 3D Sound Plus designed to add extra height and width to the soundstage. It works a treat on the HT-F9750W through its towers’ swivelling top drivers, but we’re curious to hear how it works through these compact speakers. There are no fewer than nine sound modes, including Football, Virtual Surround, MP3 Enhancer, Power Bass and five music settings.

The HT-F6500 also offers 3D Blu-ray playback, Screen Mirroring from devices running Allshare Cast and the ‘TV Sound On’ feature, which as far as we can tell simply switches to the optical digital input so you can hear sound from a connected TV.