The Samsung HT-E6500W is a scaled down version of the HT-E6750W 7.1 system we raved about back in February. This one reduces the speaker count to 5.1 and swaps the tall towers for compact bookshelf speakers, making it more living room friendly than its £1,000 bigger brother – but that also makes it easier on your wallet. Crucially it retains the vacuum tube technology used by the flagship version, which contributed to some of the best sound quality we’ve heard from a Samsung system.

Design
As expected, this is one swanky-looking system. All of the components are styled in a gloss-black finish, which makes up for in allure what it lacks in originality. Although much less imposing than the 6750W’s towers, the front speakers are reasonably large – housing two glass fibre cone woofers and a tweeter – but the rear speakers are smaller, sporting a single full-range driver. Both use similarly shaped cabinets with straight lines and eye-catching silver phase plugs poking out from the cones.

The centre speaker is similarly styled but longer and horizontal, which makes placement on your TV stand a cinch. It too uses two woofers with a tweeter in between them. The setup is completed by a disproportionately large side-firing subwoofer, which is of the passive (not powered) variety – hardly surprising but not ideal. It looks nice though, again dressed in a gloss-black finish with a large circular port on one side.

A closer inspection reveals that the speakers’ build quality is typical of an all-in-one system – the cabinets are fashioned from plastic, which isn’t as rigid or robust as we’d hoped.

Like the HT-E6750W, the main Blu-ray receiver is unremarkable and rather chunky, but the black finish is sleek and tasteful. A couple of things catch the eye – the red glow of the valves through the circular window on the right, and the central touch-sensitive LED panel, which keeps front panel clutter to a minimum. A flap below the volume controls on the right hides a USB port and an input for the auto calibration microphone.

There’s also a socket for the supplied iPod dock – we told you it was generous – and a slot for Samsung’s optional rear speaker kit (the one supplied with the HT-E6750W). There’s also an Ethernet port for those who want network functionality but can’t take advantage of the system’s built-in Wi-Fi.

Features
Despite its cheaper price tag, the HT-E6500W shares most of the 6750W’s features. Chief among these is the wonderful Smart Hub with its wealth of web content and themed ‘signature services’, such as Fitness, Family Story and Kids. These give the system a distinctly lifestyle-oriented flavour with their cute, friendly graphics. Fitness provides workout videos and tools to monitor your progress; Family Story is an easy-to-use photo and message sharing service; while Kids groups together videos, games and puzzles aimed at children. 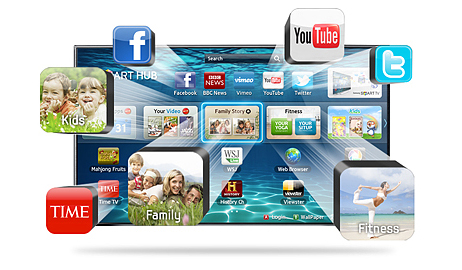 But the main Smart Hub section is where the good stuff lives. There’s BBC iPlayer, Netflix, YouTube, Dailymotion, Picasa, Facebook, Twitter and much more. What separates Samsung’s selection from rivals (apart from LG) is the inclusion of more unusual family oriented apps, like games, puzzles and stories. New services can be added from the Samsung Apps store, and also within Smart Hub are Your Video (a movie database), a search tool and a web browser. For the latter you can connect a wireless keyboard and mouse, but even so it’s painfully slow to use.

The HT-E6500W also boasts full DLNA media streaming capabilities, allowing you to play music, video and photos stored remotely on networked PCs and NAS drives. Alternatively you can play files from devices hooked up to the front USB port, and the comprehensive file support includes FLAC, AVCHD and MKV. Content from any connected source is organised in the Allshare Play menu (a new feature for 2012) making it easy to find the files you want. It also supports Wi-Fi Direct for wireless connection to devices without a router, as well as Bluetooth music playback. There’s 5GB of web storage available if you want it, allowing you to access content when you’re out and about.

The system also plays 3D Blu-ray discs and converts 2D material to 3D, plus there’s a wealth of sound modes including 3D Sound Plus, MP3 Enhancer, Power Bass and Smart Volume, which keeps everything at a consistent level. 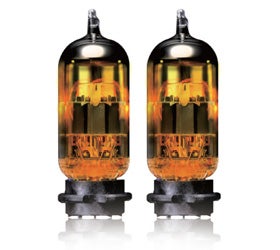 But the key audio feature is the combination of digital and valve amplification, which aims to lend extra depth while mustering the required power for 5.1-channel movie playback.

Operation
The HT-E6500W’s slick and attractive onscreen displays keep frustration at bay. The Home menu is certainly elaborate with its large animated icons and crisp HD graphics, but it really works. Smart Hub and the rest of the menus are similarly jazzy but never at the expense of useability. The only thing that hinders operation is the use of a single-core processor, which makes web browsing feel a lot slower than the BD-E8500 PVR.

Setup is simple too thanks to the colour-coded speaker plugs and helpful onscreen wizards, while automatic calibration avoids all that tiresome level-setting in the setup menu – although weirdly it turned the subwoofer level to its lowest setting, which needed correcting.

Samsung also gets it right with the remote, a thoughtfully laid out zapper very much in the Panasonic mould with its chunky buttons and clear labelling. It sits in the palm nicely and puts menu and playback controls within easy reach of the thumb. Some of the buttons towards the bottom are a bit small but on the whole it’s easy to use.

Performance
In action, there’s plenty to admire about the HT-E6500W’s dynamic and forceful sound, but it lacks the polish to make it a must-buy. On the plus side, it’s certainly powerful (Samsung claims a power output of 1000W), making an impact with the volume only half-way. If you’re upgrading from flatpanel TV speakers you won’t know what’s hit you.

So when you play a thrilling action scene like the Elemental’s assault on the city in Hellboy II: The Golden Army, the HT-E6500W conveys the chaos with gusto, using raw energy to distract you from its lack of refinement. As the Forest God hurls a car down the street and rips the hotel sign from the wall, the effects are fierce and attacking. It’s tonally consistent across the soundstage and sounds sweep smoothly from speaker to speaker.

It’s never difficult to make out what the characters are saying over the din, and even though it could be tighter and punchier the subwoofer anchors the action with reasonably deep and nicely-blended bass – helped along by the extra injection of warmth from the valve amp.

But as we found with the HT-E6750W, high and midrange frequencies are a touch sharp, particularly when you turn the volume up to neighbour-bothering levels. The louder parts of the test scene, such as the moment when the Elemental lets out a massive screech, had us wincing and reaching for the volume controls. It’s this hardness that stops us falling in completely in love with this system, but keep the volume at a lower level and it’s not a big deal.

However, it’s a fabulous picture performer. 3D Blu-ray discs like Avatar and Thor look wonderfully sharp and natural, with bright colours bursting from the screen and a cinematic level of depth. 2D discs look equally dazzling, including the Silicon Optix HQV disc, which the system handles with assuredness. Finally the system loads the Java-heavy Terminator Salvation disc in 42 seconds, and Thor in half the time. 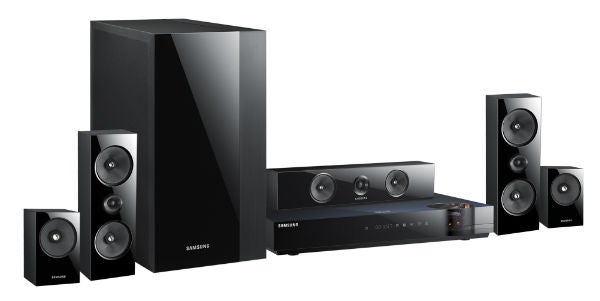 Verdict
We love the HT-E6500W’s hugely generous range of features and its stylish, living room friendly design, while its connections, format support, streaming functionality and Blu-ray picture quality are all up to scratch. And for the most part its sound quality is too, with the valve amp tech lending dynamism and punch, although evidence of brightness (particularly at loud volumes) rains on the parade. So from a performance perspective your money will be better spent on the Panasonic SC-BTT590, but in every other department the HT-E6500W is a decent purchase.