Samsung’s HT-C6930 was the world’s first 3D-ready home cinema system, but not everyone wants to play a premium for 3D functionality. For that reason, Samsung also offers a version of the system that lacks 3D support but retains the wealth of other features that made the 6930W such a superb proposition. 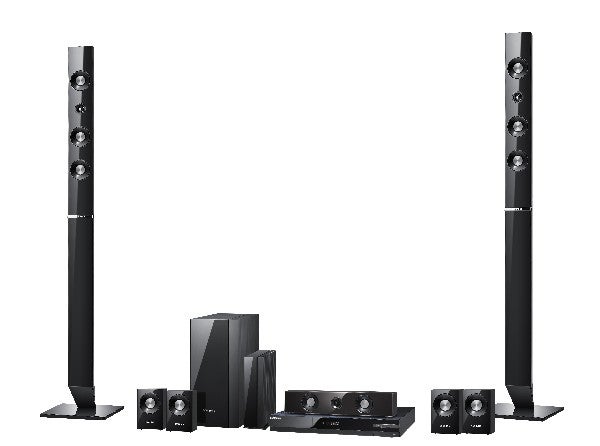 One of the HT-C6730W’s main selling points is that it’s a full 7.1-channel system – a real bonus given how tricky and expensive it can be putting one of these together yourself. What’s more, this is no ordinary 7.1-channel system – in the box is a transmitter/receiver kit that enables the surround back speakers to be enjoyed wirelessly, which means fewer cables cluttering up the room.


It’s an exceptionally good-looking system too. The main unit, which houses the Blu-ray player and 1,330W amplifier, is a sleek, black box with chic embellishments like illuminated touch-sensitive controls and a disc tray window that gently pulsates with light. The centrally-placed display panel is large and clear, and there’s a flap below the volume controls on the right hand side that hides a USB port and 3.5mm minijack input.


Around the back is a plentiful array of sockets, most significant of which are the two HDMI inputs and one output. Finding HDMI inputs on an all-in-one system is not something to be taken for granted, as we’ve tested several of late that don’t provide them, and their inclusion makes it a lot simpler to enjoy other hi-def sources through the system. Sadly though, it doesn’t support the Audio Return Channel feature so you’ll need to hook up your TV or digibox to the optical digital input. You’ll also find component and composite video outputs, analogue stereo input, an Ethernet port, an FM aerial input, a slot for the supplied TX card that beams surround information to the receiver and a socket for the supplied iPod/iPhone dock.


Turning to the speakers, the fronts are of the tallboy variety and each stands 1,300mm high. They’re styled in a snazzy gloss-black finish with exposed drivers, and from a distance they look sturdy enough, although up-close inspection reveals slightly lightweight build quality. Also in the box are a long horizontal centre speaker and four compact bookshelf speakers for the surround and surround back channels. These are also styled in gloss black and don’t let the side down aesthetically. The subwoofer is a passive model and thanks to its discreet dimensions (168(w) x 350(h) x 295(d)mm) and alluring black styling it won’t stick out like a sore thumb in your living room. 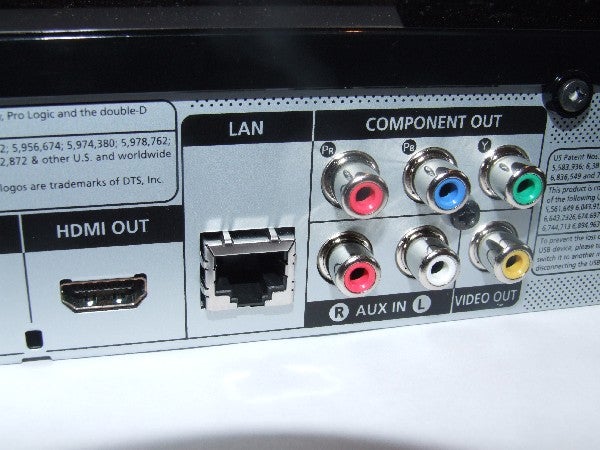 Setting it all up is simple enough – the two parts of the tallboys screw together and connect to square bases, while all of the speakers connect to colour-coded plugs on the back of the main unit and springclip terminals at the other end. It took us no more than ten minutes to get everything rigged up, which is the level of simplicity you look for in a one-box system.

Aside from 3D playback, the HT-C6730W does everything you could ever hope for from a Blu-ray system, with an enviable list of out-the-box talents. Firstly, it comes with Wi-Fi and local storage for BD Live content built in, so there’s no need to fork out for pricey USB dongles or Flash drives. And with built-in wireless access, it’s ultra simple to access the system’s range of networking features, which include All Share – Samsung’s DLNA networking function that allows you to stream music, video and photos from networked PCs – and Internet@TV, a range of online applications. 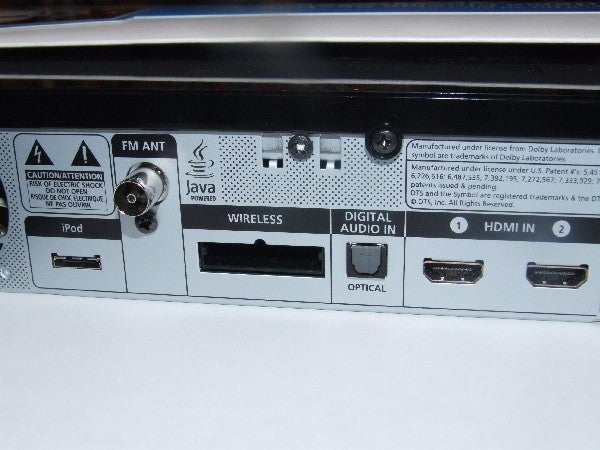 These are both terrific features that add a lot of value to the overall proposition. All Share works smoothly, accessing your remote files using a familiar, friendly folder system and great-looking graphics, while Internet@TV’s layout is bright, colourful and easy to follow. It also provides a wider range of content than Panasonic’s Viera Cast and LG’s Net Cast, hosting popular social networking sites like Facebook and Twitter, as well as LoveFilm, YouTube, Picasa and Google Maps. Still no sign of BBC iPlayer but even without it this is a strong offering.


Elsewhere there’s tons more to keep you entertained. The system supports Dolby True HD, DTS HD Master Audio and Dolby Pro Logic IIz, which enables you to put the surround back speakers above the TV and give movies a front height effect. This is backed up by a range of Samsung’s own DSP modes, including Smart Volume, MP3 Enhancer and Power Bass, plus a range of sound effects designed to replicate different environments, such as ‘Hall’ and ‘Church’. The system also handles digital media formats such as MP3, WMA, WMV, JPEG, DivX HD and AVCHD – that’s a decent line-up by anyone’s standards. 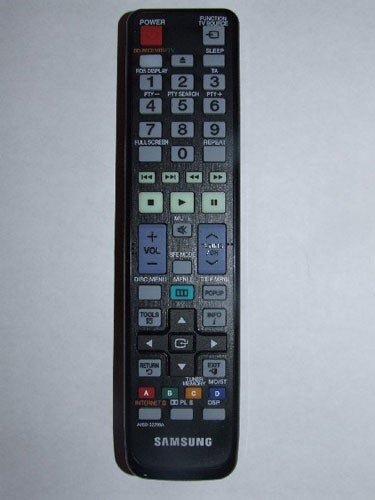 Using the HT-C6730W is a blissfully simple experience, mainly thanks to the remote which takes a leaf out of Panasonic’s book with its large, chunky buttons laid out in a way that a five-year-old could understand. The keys are nicely separated by colour and clearly labelled, plus all of the system’s regularly-used functions have been given their own buttons. This top-drawer zapper design is complemented by onscreen menu that use full colour graphics and a clear structure.

The HT-C6730W delivers an impressive audio performance with Blu-ray discs. Inception’s high-octane action set pieces are reproduced with blistering energy and clarity – the third-level dream sequence in the snow is packed with sharp, attacking gun shots and powerful low-end effects, like the avalanche and the exploding building. The clean, crisp handling of the score pushes the action along nicely and the centre speaker’s clear dialogue reproduction enables it to cut through the frenetic action. It’s exciting stuff, and will blow your mind if you’ve only been used to flatpanel TV speakers. 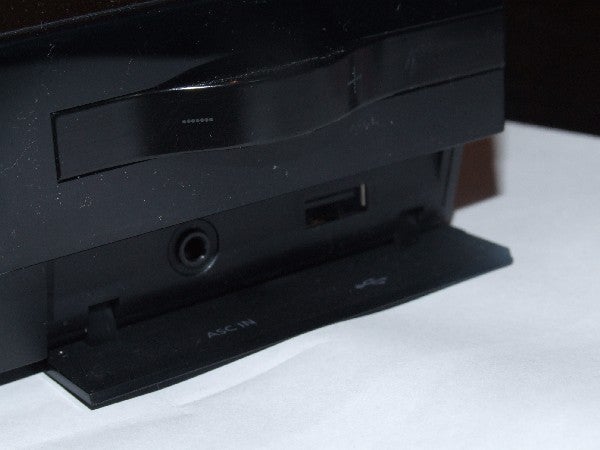 What’s more, when watching a 7.1 soundtrack the soundstage is wonderfully immersive, with those extra surround speakers giving you a better sense of envelopment than a 5.1 setup. They’re not quite as effective when used as front height speakers but given the right material (primarily video games) you can get some entertaining results out of Pro Logic IIz.


High frequency reproduction is fairly good by all-in-one system standards, making the top-end detail of Inception’s DTS HD Master Audio track sound crisp and perky with very little harshness. We’re not saying it’s any sort of match for the AV receivers and speaker systems we’ve tested of late, which are likely to get you greater openness, clarity and power, and we’re not bowled over by the subwoofer either, which is a bit flabby when really pushed hard – but overall it’s a more satisfying sound than you might expect from a budget system. 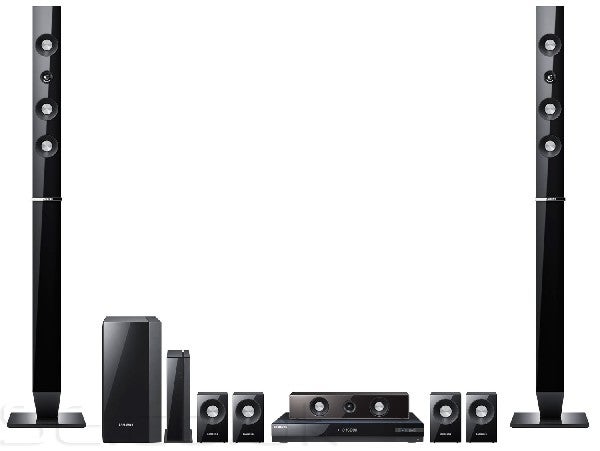 Video wise there are no problems whatsoever – the HT-C6730W outputs clean, glitch-free 1080p pictures over HDMI and the result is a beautifully detailed, accurately coloured and cinematic-looking picture. We’re also impressed by the quality of the system’s 1080p upscaling, which hits HD resolution without introducing unsightly artefacts.

If you want 7.1-channel home cinema on a budget but have no interest in 3D, then the HT-C6730W is well worth a punt. Although you can hear the budget limitations of its sound quality, it still delivers a competent performance that does justice to Blu-ray’s HD audio formats, and when you marry that to the extraordinary feature list and stylish looks you have a genuine bargain on your hands.