Samsung boasts one of the widest selections of one-box Blu-ray systems on the market, ranging from 3D-capable 7.1-channel systems down to bedroom-friendly 2.1 affairs. Many of these only differ in terms of speaker configuration, mixing up the sizes of the fronts and rears to cater for different room layouts.


The HT-C5530 on test here, for example, is a 5.1-channel system that comes with a pair of 130cm-high tallboy speakers for the front channels and a pair of 14cm-high bookshelf speakers for the rears, whereas the HT-C5500 uses four bookshelf speakers and the HT-C5550 provides four tallboys. In each case, you get the same passive subwoofer, slim centre speaker and Blu-ray receiver unit. 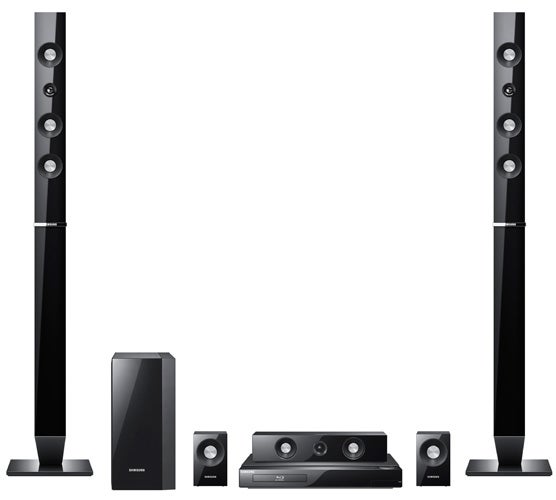 If you’re still following this, the point we’re trying to make is that the Korean company has something for everyone, no matter how big your budget or abode. What they all have in common, however, is a generous range of features and a gorgeous contemporary design.


This design, as is usually the case with Samsung kit, involves a deep gloss-black finish for all of the components, which will be covered in fingerprints in no time, while the brushed aluminium effect on top of the main unit offers a bit of variation.


This deck is slightly larger than the company’s standalone Blu-ray players but is equally sleek and minimal. Power it up and it turns into something out of ”Tron”, with a ring of blue light around the volume dial and illuminated touch-sensitive controls across the top. Samsung has clearly gone for the style jugular with this system and succeeded. 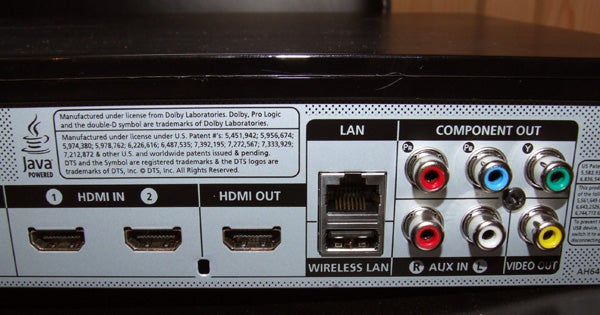 The speakers look equally alluring, although the build quality of the front tallboy speakers isn’t what we’d call heavy duty. They’re made up of three sections that slot together – a top part containing the drivers, a hollow middle section and a square base that needs to be screwed on. Once assembled the column is a little precarious, wobbling around with the slightest knock, but sadly that’s par for the course with systems at this sort of price.


The rear satellites are built to a decent standard and use a compact cuboid enclosure with springclip terminals on the back. The centre speaker is longer and slimmer than the rears (measuring 360 x 74.5 x 68.5mm), which should make it easy to slip into an AV rack, while the compact subwoofer is pleasantly styled in a combination of gloss black and corrugated plastic. 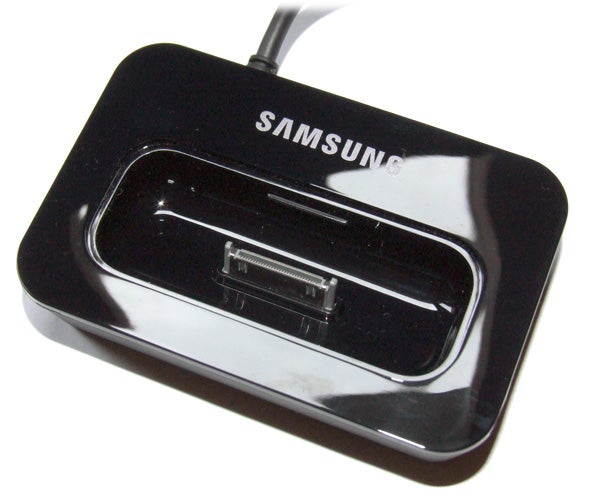 As for connections, the main unit offers an HDMI output as well as two inputs that let you switch between external devices (such as a Sky+HD box and PS3) using the system’s remote, as well as amplifying their sound. Component and composite complete the video line-up, while audio connections include optical digital and analogue stereo inputs.


Next up is an Ethernet port, which brings a smorgasbord of networking features to the table, although if you prefer a wireless connection there’s a USB port on the back for Samsung’s Wi-Fi dongle (WIS09ABGN). Sadly this isn’t supplied and will set you back around £45. Another optional extra is the SWA-5000 wireless receiver module and TX card, which offers cable-free rear speakers but will add another £80 to your bill. Thankfully iPod or iPhone owners don’t have to pay extra to enjoy their tunes through this system as the dock is bundled in the box.

The HT-C5530 comes equipped with the same networking features and multimedia support as other one-box systems in Samsung’s range (such as the HT-C6930W) so we won’t go into any great detail. But it’s worth pointing out that when connected, you can stream music, video and photos from networked PCs and other DLNA devices using the excellent All Share feature, as well as download/stream BD Live content. To do this, you’ll also need to connect a USB storage device of at least 1GB, as there’s no built-in memory. If the rear USB is taken up by the Wi-Fi dongle then you’ll have to use the other port found under a flap on the front panel. 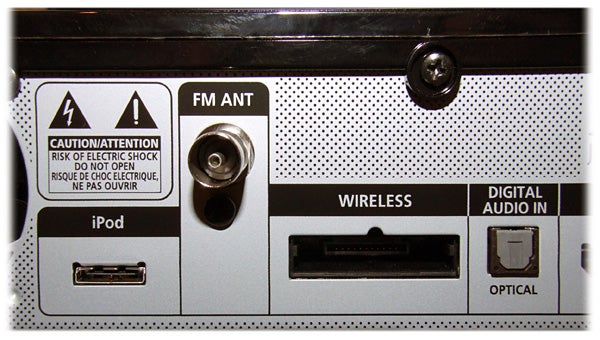 The network connection also grants access to Samsung’s Internet@TV feature, a range of online applications including YouTube, Picasa, Facebook, Twitter, Google Maps, LoveFilm, Rovi TV listings and many more. New apps can be added when available by clicking on the relevant icon in the attractive-looking interface.


Elsewhere the system supports an impressive range of digital media codecs and containers, including DivX HD, XviD, MKV, AVI, WMV, MP3, WMA and JPEG. These can be played back from USB devices or streamed over a network. External HDDs are supported, but they must be under 160GB in capacity and formatted in FAT16/32, not NTFS.


Other features include decoding of all HD audio formats, Smart Sound (which regulates the volume level to prevent any nasty shocks), MP3 Enhancer and Power Bass. You also get five Sound Field Effects and Dolby Pro Logic II. An RDS FM radio tuner is also on board. 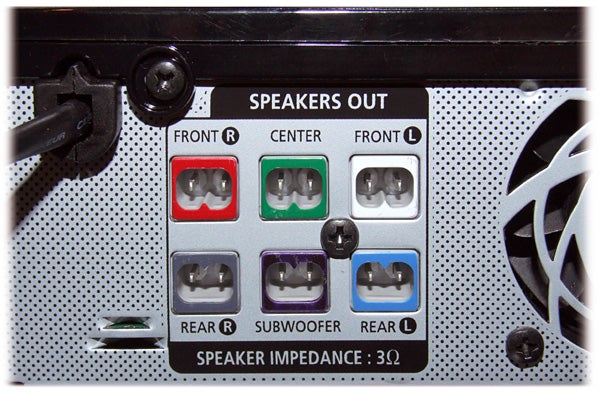 As you’d expect, the HT-C5530 is incredibly easy to setup. All of the speaker cables are colour coded at both ends so you know where to stick them, the column speakers fit together easily and an Initial Settings wizard runs through the main menu options when you first turn it on.


You don’t even have to worry about tweaking the audio levels or speaker distances as the Musical Auto Calibration (MAC) feature will optimise the sound for you using the supplied microphone and the built-in test tones. After doing this, the resulting sound seems well-balanced, but some of the speaker distances seemed a bit wide of the mark and needed adjusting.


The system’s onscreen design is wonderful. The main menu uses brightly coloured fullscreen graphics with large icons denoting each type of media at your disposal. You can switch between connected devices using the coloured buttons on the remote. Along the top is a selection of recommended Internet@TV apps, providing a quicker way of accessing them. Browsing networked or USB devices couldn’t be easier thanks to the clear structure and detailed file labelling. 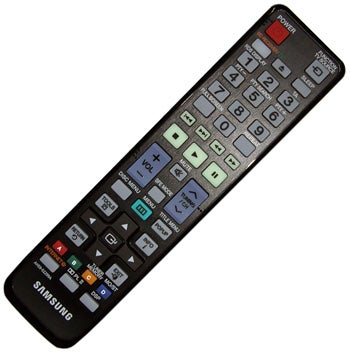 Much of the credit for the system’s ease of use must go to the remote, which looks like it was designed for a child. The buttons are big and spongy and labelled in large capital letters. Clever use of colours separates out the sections nicely and there’s a handy Tools button that brings up a small in-playback menu.


Here, you can access the picture settings, which include Movie and Dynamic presets, as well as a User setting where you can set the level of noise reduction and sharpness. These should be used sparingly as they can make the picture look harsh and unnatural at high levels.

Our regular ”Terminator Salvation” disc loading test showed the Samsung to be surprisingly slow, taking 55 seconds to reach the Sony Pictures logo. Even ”Transformers: Revenge of the Fallen” took 45 seconds to start playing – strange for a company that once set the benchmark for disc loading speeds.


Picture quality is very impressive though. The abundant detail contained in ”Transformers: Revenge of the Fallen” on Blu-ray is expertly handled, making the picture look utterly sharp despite the presence of Michael Bay’s customary film grain. From the texture of sand in the Egyptian desert to subtle indentations on skin, the Samsung renders everything with superb clarity. This is even maintained during dark scenes like the astounding night sequence in Shanghai, in which the flurry of moving mechanical parts and busy backgrounds stay clear and focused.


The picture also boasts impressive levels of depth, colour and contrast, while motion tracking is excellent at 1080/24p – as the camera moves through Sam’s kitchen with utensils morphing into robots all around, the frantic movement is smooth and easy to follow. 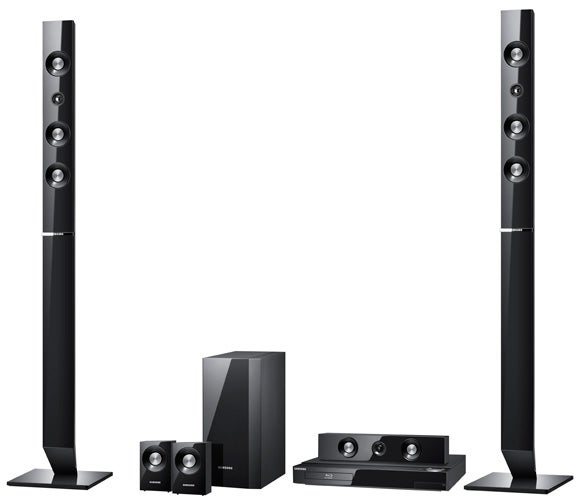 As for audio quality, the 1,000W amplifier and speakers team up to deliver a loud and energetic sound, with decent cohesion across the front and solid dialogue reproduction that gives Megatron’s dulcet tones real warmth and body. Surround effects are expansive and smoothly-steered too, which breathes life into busy action scenes.


The fronts pick out a respectable amount of sonic detail. For the most part, high frequencies sound clean, with smashing glass and whizzing bullets punching through the melee, but despite this the sound still feels boxy, lacking the openness and sparky dynamism of the best separate systems. Some loud crashes also sound a little on the harsh side.


The other problem is that the subwoofer is far too dominant. Rather than underpinning and reinforcing the other channels, it overpowers them, which leads to a very boomy sound that gets out of control during explosive action scenes. You can alter it in the setup menu, but we couldn’t find a completely satisfactory low-end balance.


With an iPod plugged into the supplied dock, the system handles music with surprising aplomb. ”Spies” by Coldplay has a pleasant richness and fluidity, and the heavy bassline is handled with more restraint than we expected. CDs also sound enjoyable, but with a little more clarity and detail in the mix. It’s by no means audiophile standard but fine for everyday use.


Provided you don’t approach the HT-C5530 expecting the same sound quality you’d get from decent separates, you should be very happy with it, particularly when you consider the amount of features you get for your money. It ticks all the boxes – PC streaming, Web content, wide format support, HD audio decoding – plus it’s stylish and extremely easy to use.


Sure, the sound quality is flawed, the front speakers are flimsy and you have to pay extra for Wi-Fi, but if you’re willing to overlook these shortcomings then the HT-C5530 represents great value for money.