The Samsung HT-BD2 is the second Blu-ray system to hit our test bench after the Panasonic SC-BT100, which offered some tasty features and stunning 1080p picture quality, but all things considered we felt it was bit cheeky asking consumers to fork out for optional rear speakers when multichannel sound is so integral to the Blu-ray experience.


So with that in mind, the HT-BD2’s key advantage over the BT100 is one where you get a full 7.1 speaker system in the box for only a slightly higher price than the 3.1-channel Panasonic, making the Samsung seem like better value on paper. Of course, we’ll reserve judgement until we’ve delved a bit deeper into its features and performance, but it certainly gets the Samsung system off to a flying start. 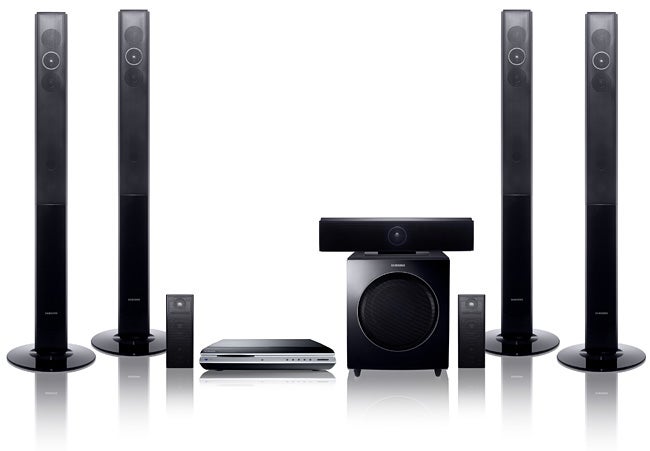 However, it falls at the first fence with the discovery that the built-in Blu-ray player is Profile 1.0, which means it lacks the secondary video and audio decoders needed for picture-in-picture features. Those of you looking for a system that supports everything the format has to offer need to look elsewhere – and you should start with the Profile 1.1 SC-BT100 or hold out for a BD Live-capable system (which Panasonic will no doubt come out with first).


But on the audio side of things, the HT-BD2 really delivers the goods. It boasts built-in decoders for Dolby True HD, DTS HD Master Audio, DTS HD High Resolution Audio and Dolby Digital Plus, which is why the inclusion of a 7.1-channel speaker system is so exciting. 7.1-channel HD audio soundtracks are found on many Blu-ray titles, and this system allows you to experience them in all their glory. You’ll also find support for Dolby Digital, DTS and Pro Logic IIx, which turns stereo or 5.1-channel sources into pseudo 7.1.

All of the processing and amplification takes place in the main unit, which pumps out a respectable 1,100W (RMS) or power, which works out at 135W per channel with 155W for the sub. The built-in disc drive obviously plays Blu-ray, but it also spins DVDs (upscaling them to 1080p if you want), finalised DVD-RW/-Rs and CDs, and you can also play MP3 and JPEG files from recordable CDs and DVDs. However, the unit is locked into Blu-ray Region B and DVD Region 2 and you can forget about DVD-Audio playback, which would have been a nice bonus feature for fans of hi-res music. 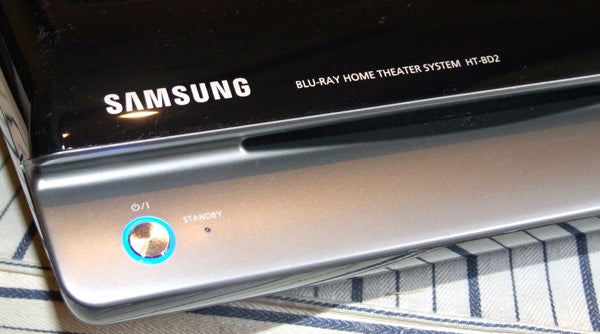 The HT-BD2 also benefits from Samsung’s exquisite taste in design. The main unit is a slim, sleek and beautifully built piece of kit, adorned with the company’s usual seductive high-gloss black finish and blue lights, plus a grey section that juts out and houses the playback, volume and power buttons. The icing on the cake is the front loading disc slot, which sucks up the disc in a way that Alan Partridge would describe as a ‘nice action’.

On the back of the main unit is a solid set of sockets, including an HDMI 1.3 output that offers 1080/24p output and HDMI CEC support (which Samsung calls Movie Frame and Anynet+ respectively). The video output for this socket can be set to 1080p, 1080i, 720p, 576/480p or 576/480i. There are also component and composite video outs, two optical digital audio inputs (handy for feeding in a Dolby Digital bitstream from a Sky or Freesat box) and a LAN port, which can be used to update the unit’s firmware.


There are no HDMI inputs though, so you can’t use the system as a video switcher for other HD sources, or take advantage of the HD audio decoding from a separate hi-def player. It’s also worth pointing out that there are no USB ports or card slots for playing back media files, and there’s no iPod dock as found on the SC-BT100.

The front and surround speakers are of the tallboy variety, each standing over 1.3m tall when perched on the circular stand and plastic lower section (which you have to bolt together yourself). Despite their size, the speakers aren’t too imposing, with a matching gloss black finish that would look great in any living room. But if you need to reduce their impact on your space, then you can wall-mount them.


Also in the box is a pair of bookshelf style surround back speakers, a horizontally mounted centre speaker and a squat, cube-shaped powered subwoofer, which is mounted on sturdy plastic feet. 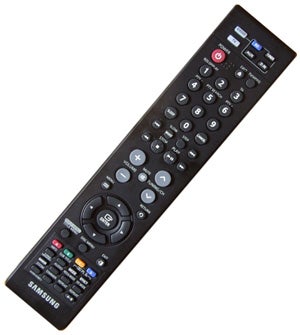 Setting up the system is a piece of cake thanks to the inclusion of coloured plugs on the ends of the supplied speaker cables that correspond with the terminals on the back of the main unit. The onscreen architecture is identical to the Samsung BD-P1400 (obviously the player at the heart of this system) which is good news, given that the main menu is dead simple to navigate and is presented in hi-def resolution with snazzy graphics.


The remote is one of the long thin types that Samsung favours, but we’re not big fans of the overcrowded layout or tiny labelling, both of which make operation less intuitive than it should be.


But there are no qualms over picture quality. Hooked up to a 1080/24p-capable Toshiba LCD set with Movie Frame turned on, the Samsung turns in a very striking picture performance with ”I Am Legend”. The image boasts plenty of depth and masses of detail, making the overall viewing experience feel immersive and engaging.

The opening shots of a deserted New York in ”I am Legend” are simply stunning. The buildings, trees and scattered debris look admirably sharp with superb edge definition, and you can pick out even the subtlest background detail (including the release date on the cheeky Batman/Superman movie poster). The system’s colour handling capabilities are equally impressive, offering richly saturated yet realistic tones.


And when the tranquillity is shattered by Will Smith’s car racing round the streets, the system’s excellent picture processing tracks the movement of the car and keeps up with frenetic camera work without showing any signs of artefacts. That said, it’s worth pointing out that its picture quality isn’t quite up to the same standard as the Panasonic SC-BT100, which uses the outstanding UniPhier chip to deliver slightly sharper images.


Upscaled 1080p DVD images can’t match true hi-def in the detail stakes but the HT-BD2 comes fairly close, offering bold and artefact-free pictures that will give your SD collection a new lease of life. 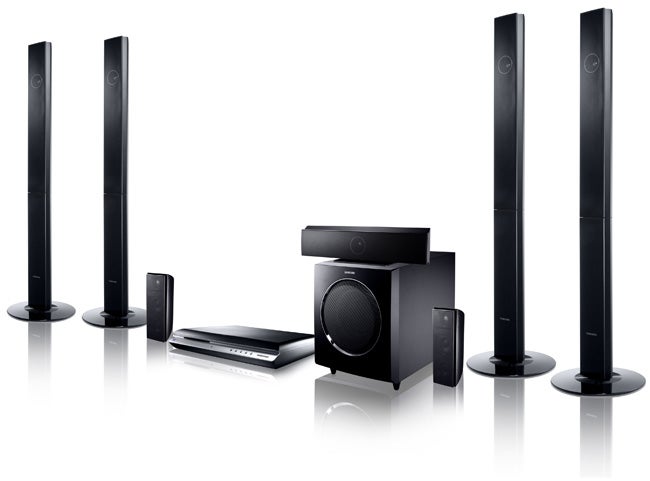 While the HT-BD2 is sonically impressive, we weren’t exactly blown away by it. ”I Am Legend’s” 5.1-channel Dolby True HD track certainly sounds dynamic and detailed, but the overall tone is a little too bright for us to fall in love with it completely, making loud, sudden sound effects grate rather than excite. And although the active subwoofer’s bass output is well rounded, avoiding the boomy quality of the SC-BT100’s passive bass-box, it doesn’t quite go deep or loud enough (even with its volume dial cracked up high), leaving those crunching zombie-packed action scenes sounding a little anaemic.


But on the plus side the surround back channels are put to good use with 5.1-channel soundtracks thanks to Pro Logic IIx, which fills out the gaps in the soundstage and make the listening experience more involving. And with true 7.1 material, the effect is mesmerising – surround effects sweep all the way round you and pull you deeper into the action. Yes, the sonic shortcomings can still be heard but with eight discreet channels buzzing round the room you’re too involved to care.


With a Blu-ray player and full 7.1-channel sound system crammed into a single package, the HT-BD2 offers better value for money than its main competitor, the Panasonic SC-BT100. What’s more, its picture quality is superb and it looks gorgeous.


But our positive impressions are spoiled by the lacklustre movie sound quality and Profile 1.0 spec, which make the Profile 1.1 Panasonic seem more attractive, provided you can afford to fork out for the extra rears. But if you’re not fussed about picture-in-picture and simply want a good-value, hassle-free system with 7.1-channel sound from the box, then the Samsung is probably your best bet.