The Gear S3 comes with the S Health app for the watch and the companion app for Android. This is responsible for keeping tabs on all of the usual activity-tracking metrics, such as steps and sleep, and all of this is done automatically.

There’s even exercise tracking on certain bodyweight movements such as squats. I found the actual rep counting a little hit-and-miss, however. You really need to exaggerate the movement to get some reps to count.

As for the step counting, this was a typical affair. You can set a target in the app and you get update prompts on your progress. You also get reminders to move if you’re sat for too long but, in a novel move, you also get prompts to stretch as well. So I could be sat there, typing away, and I’d get a buzz telling me to do a few side-to-side rotations, and the watch would count each rep on the display. 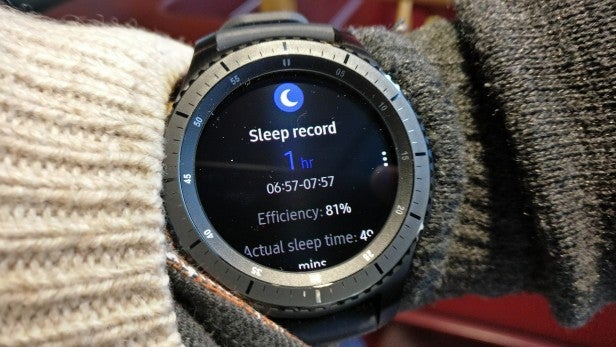 The sleep tracking was accurate on the whole, but it’s a little strange in that the notification you get on the watch when you wake up can be just one small segment of your sleep.

So say you woke up an hour or two before your alarm and went back to sleep, the notification might show your sleep time as being only an hour, rather than the total. Diving into the companion smartphone app shows the full night’s kip at least, and you get a breakdown of motionless, light and restless sleep.

Strangely, when I left the watch in my gym locker during a workout on one occasion, it decided I’d taken an early afternoon siesta and given me some additional sleep time. Fortunately this didn’t happen again, but I would’ve thought the watch could recognise being completely stationary compared with me being asleep.

The barometer and altimeter are also used to more accurately track floors climbed, so there’s a specific target for taking the stairs. Again, you get progress updates and little reward notifications to say when you beat a record or hit your goal. It’s actually all very motivating and well implemented. 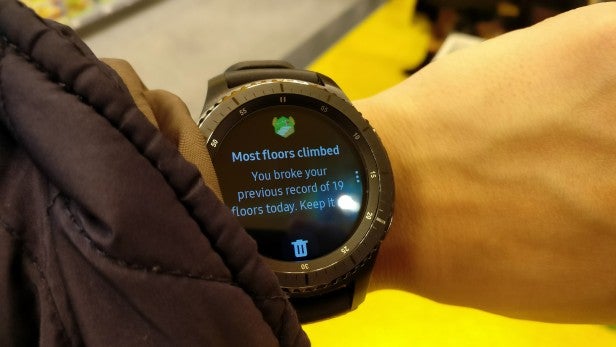 All of those sensors I mentioned earlier are what will really appeal to fitness enthusiasts, though – much like how the Apple Watch Series 2 found its footing as a fitness wearable alongside its original smartwatch smarts.

The GPS is going to be great for more accurately tracking your distance and speed during runs or bike rides, and the barometer and altimeter are going to be popular with hikers and for other outdoor exploits. This is all topped off with the returning optical HRM, as seen on the Gear S2.

Unfortunately, while the GPS was pretty much right on the button when it came to distance compared to the TomTom Spark 3, Samsung Gear Fit2 and Wahoo Fitness Tickr X I wore at the same time, the optical HRM threw up some very inaccurate readings. 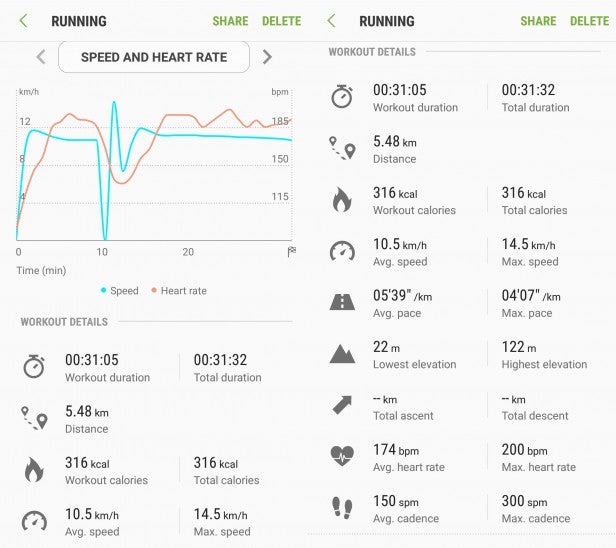 Checking the watch while I ran, its bpm reading was often 20 beats higher than the TomTom Spark 3 and Wahoo Fitness Tickr X chest monitor I was wearing. It put my maximum heart rate as high as 200bpm, but generally at 180+, where both other devices were putting me in the 160-170bpm range. I’d hazard a guess that the inaccurate readings weren’t helped by how much the watch bounced around on my wrist due to its weight.

The poor HRM performance, combined with just how clunky the watch felt on my wrist, made it less than favourable for running. I have small wrists, so your experience may well be more positive, but as it stands, I’d much rather run with the Samsung Gear Fit2, which provides a very similar tracking experience, but minus the weight and I didn’t experience the anomalous heart-rate data. 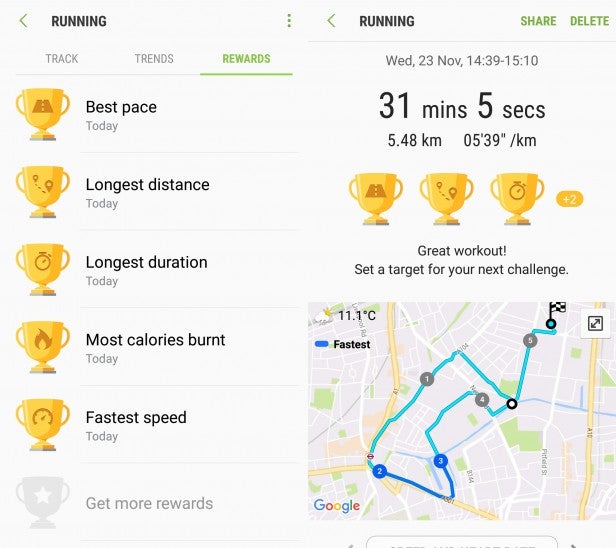 At the end of your run, the S Health app does give you a bunch of rewards to keep you motivated, in a similar method to Strava. So you’ll know if you’ve run farther or faster.

Disappointingly, while the Gear S3 is rated to IP68, Samsung says it’s not suitable for swimming or diving, which gives a distinct advantage to the Apple Watch Series 2.

Samsung has increased the battery capacity to 380mAh, up from 250mAh in the Gear S2. This meant that with the always-on display turned off, I was averaging around three and a bit days between charges. Turn on the always-on display and this dropped to just short of a full two days. That’s pretty impressive and better longevity than I saw with the Apple Watch Series 2.

A magnetic charger is included, which props the watch up so it can be used as a nightstand clock. A quick 20 minutes of charge should get you enough for 10 hours of use, so you can always top the watch up in the morning before you set off.

Should I buy the Samsung Gear S3? 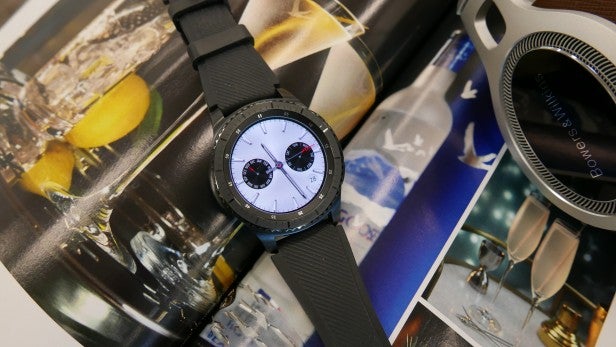 The Samsung Gear S3 is a more refined version of the S2. I’m actually really fond of its larger display and more traditional styling. I think it looks really classy. The improved rotary bezel is also really great and is my favourite piece of watch UI.

However, there’s no getting away from just how huge the watch is – especially on daintier wrists. It dwarfs all other smartwatches I’ve worn, including other large models such as the Huawei Watch.

While on paper all of its sensors should make it great for sports, its size is to its detriment and I’m pretty sure part of the reason why the heart rate monitor performed so poorly for me, especially considering I didn’t have the same inaccuracies with the Samsung Gear Fit2.

Then there’s the real issue of Tizen and its app ecosystem. There are still no great apps to be found, and I fear that’s not going to improve if it hasn’t already. After all, why develop for Tizen’s limited devices when you can reach far more with Android Wear?

Ultimately, for the high price of this smartwatch, there’s a lot of unfulfilled potential.

The Samsung Gear S3 flirts with greatness, but it ultimately falls short due its gargantuan size and weight, as well as its Tizen OS.