The Gear S runs on Samsung’s own Tizen OS platform, which we’ve had our gripes with in the past – especially with the first-generation Gear, Gear 2 and the Gear 2 Neo. We were a little more forgiving in its first iteration – not much, mind you – and now three smartwatches later, the truth is that it’s still doesn’t feel tremendously polished.

The first big problem here, which is unlikely to change, is that you can only sync it with Samsung Galaxy phones running Android 4.3 or above. Straight away that’s alienating a lot of prospective smartwatch owners.

Tizen-running wrist-huggers feel more phone-like than other smartwatches, and that does have its obvious benefits. There are multiple homescreens and a home button to add a sense of familiarity.

You can swipe left to see notifications, or swipe right to access S Health, saved music and breaking news. Swiping up on the home screen brings up the quick settings menu that mimics the notification drawer on an Android phone. Here you can adjust volume and control screen brightness. Swipe down from the homescreen and this is where you’ll find your app drawer. Some aspects have had to be shoehorned in to accommodate the smaller display, like tucking the Recent Apps list in the app drawer, but it’s at least good to have it there. 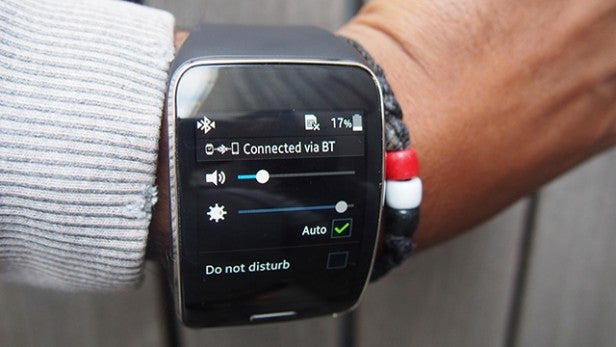 One of the most surprising new Tizen additions is the inclusion of a keyboard. There’s a greater degree of acceptance to find it on the Gear S than on any current Android Wear watch, thanks to the sheer size of the screen. That doesn’t mean it’s not fiddly to type on. You do have Swype-like functionality to help matters, but that doesn’t really detract from what’s a very tricky experience when searching for addresses or browsing the web.

There’s a learning curve with Tizen, just like there is with other smartwatch platforms, but once you quickly work out where things live and identify some of the gestures that aren’t as obvious, such as swiping down to jump back a screen, it’s the closest to a smartphone experience that you’ll find on a smartwatch.

Samsung has to be applauded for the sheer amount of functionality it’s piled in here, but it’s at the expense of the buttery smooth experience you get with Android Wear or on Pebble’s OS. 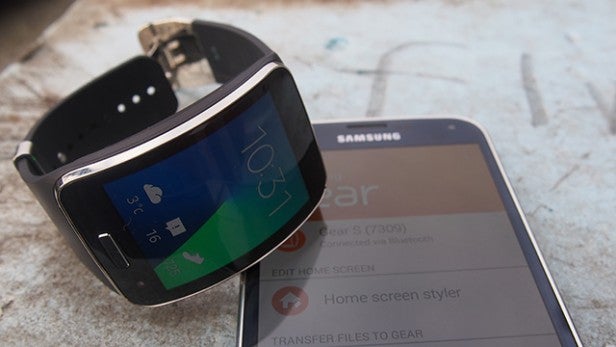 Part of the problem with Samsung’s operating system is the underwhelming app support. The first version of the Samsung Tizen app store was very poor. Since then, Samsung has spruced the store up, and it’s easier to discover new content, but it still lacks depth. As explained previously, despite championing the ability to use the Gear S without a phone, you still need a phone to download apps. And that’s a major flaw.

There is at least a big bunch of native apps to get you started, and they do their job well. The usual stuff is covered, like contacts, schedule (similar to S Planner), alarms, email, messages, gallery and a music player. S Health is there, too, and serves up a whole lot of data. There are aspects that work nicely on a watch, like the inactivity warning that springs up when you haven’t been moving enough during the past hour. We also had more luck using the Here-powered Navigator than we had with Android Wear’s navigation support. 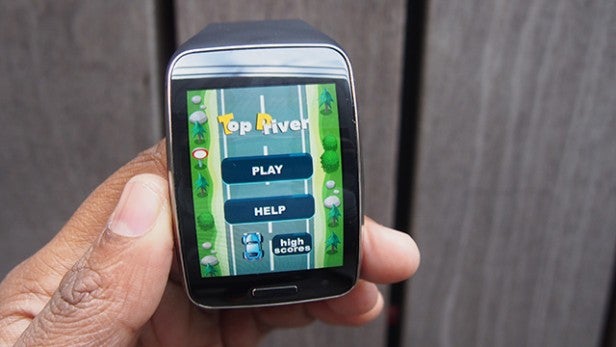 For third-party apps, Tizen simply isn’t in the same realm as Android Wear. Paid-for apps seem to outweigh free ones, for a start. High-profile apps are still few and far between, and that’s a problem.

The Opera Mini web browser offers a decent experience, while Nike Running looks and works really well on the Gear S and shows there’s potential here. For games it’s not so great – the two we tried out, Back to Candy Land Blitz and Top Driver, are unsurprisingly very basic in terms of gameplay and not tremendously original. They’re not without their bugs, either. We experienced issues with the Deezer app randomly launching on our phone, despite not wanting to access it when we asked it to.

Bottom line: there wasn’t one app that we wanted to use on a regular basis. App support needs more quality and quantity.

If there’s one major turn-off with the current generation of smartwatches, it’s battery life. The Gear 2 and Gear 2 Neo managed a decent three days, but despite including the same 300mAh non-removable battery as the last Tizen-based Samsung watch, you are only really going to around the two-day mark with the Gear S. That comes as no surprise when you consider the jump up in screen size.

The problem here is that, as with a smartphone, you have to be mindful of what’s running to get the best out of the battery life. Like not having the always-on watch mode activated, turning off the Wi-Fi when you don’t need it, and closing apps. It doesn’t, however, take much web browsing, gaming, phone calls or handling of notifications to see a drop-off. It’s also no surprise that using GPS drains the battery quickly. Starting the Nike Running app with anything other than 100% battery will push you close to that perilous battery zone. 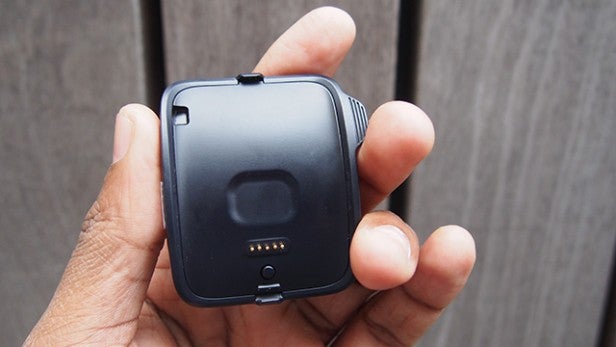 Getting two days’ life means tapping into the power-saving mode, which works in a similar fashion to the power-save mode on the Galaxy S5. This greys out the screen and limits access to some features, pushing the battery life further. You’ll get three or four more hours’ use, but if you even consider using GPS or 3G it’ll drain in no time.

It does at least jump up to full capacity from empty in just under two hours. The charging cradle, as with previous Gear watches, clips onto the back of the watch, but as an added bonus it can actually conserve battery power to give you a boost on the move. It can get you to around the 50-60% mark, which should supply another half-day’s use. The slightly large problem here is that you can’t, of course, wear it when it’s charging. 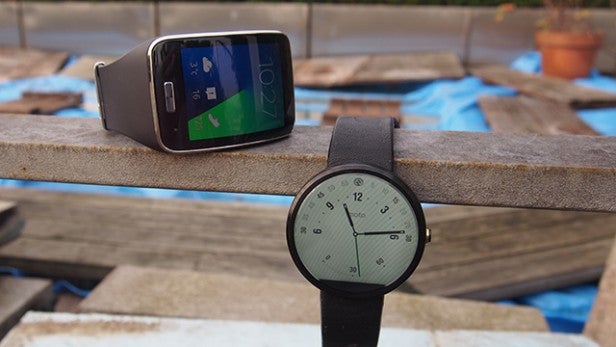 Should I buy the Samsung Gear S?

Samsung’s fifth attempt at a smartwatch in such a small space of time is its most ambitious, but we don’t think it’s really much closer to selling smartwatches as a concept.

We grew to like certain aspects of the Gear S – even that big screen – but there’s something still a little fractured about how it all works. You still need a smartphone to download apps, and making calls requires spending more money on another mobile contract. The app situation hasn’t improved enough, either.

The Gear S feels like another product where Samsung doesn’t really know what a smartwatch should be or do, and is testing the market. The Pebble Steel still offers the most solid all-round smartwatch solution, and if you have to go with something running Android Wear, then the LG G Watch R gets our vote.

Ultimately, though, smartwatches on the whole are still not free from many of the same issues, which makes them so difficult to recommend.

The Samsung Gear S is big, bold and feature-packed, but it costs to have a smartwatch that can live apart from its smartphone companion.

Thanks to Mobile Fun for providing our Samsung Gear S review model.