As mentioned, the Fit2 runs on Samsung’s own Tizen operating system, much like its new Gear S3 smartwatch. It feels slick and intuitive on the Fit2, and you can customise the widgets or change the watch face to your liking. More are available in the Galaxy app store.

There are also various apps you can install, but there aren’t many that leap out. It’s a problem that plagues the Gear S2 and Gear S3 smartwatches, and there are even fewer apps for the non-circular faced Gear Fit2.

There are sporting apps such as golf trackers, but as a non-golfer I couldn’t say if they were any good. Apps such as the Alarm are worth installing; in fact, it’s strange to see that it isn’t pre-installed. 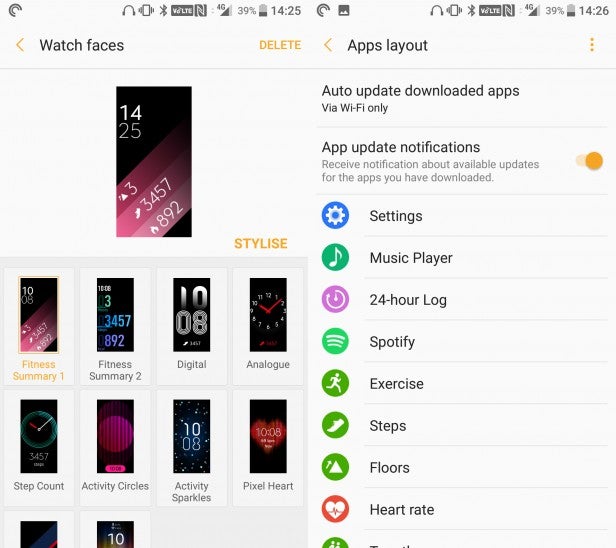 There is a dedicated Spotify app available for the Fit2, but only for certain regions – such as the US. To install it in the UK, I had to install a VPN app and go through a slightly convoluted process.

The Spotify app lets you navigate your playlists and Spotify’s library, but music plays from your smartphone, so your handset will still need to be on you. An option to save Spotify playlists offline to the Fit2 would have been better. 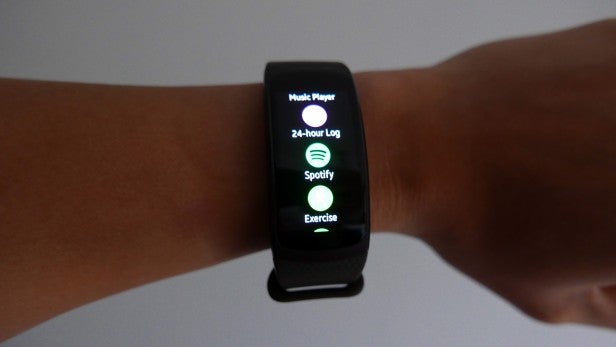 While the apps aren’t great, the Fit2 does an excellent job with smartphone notifications, bringing them up in a useful way and letting you quickly reply to messages. Like other Tizen-powered wearables, a swipe to the left of the watch screen brings up your notifications. 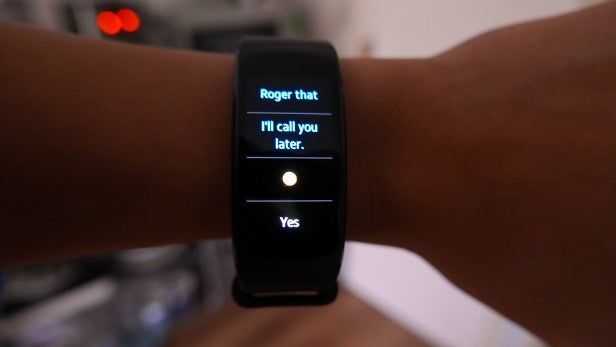 They’re distinctly better than the more basic notifications from other fitness wearables such as the Fitbit Charge 2, which simply brings up basic text. With the Gear Fit2 you’re able to reply to messages in apps such as WhatsApp with pre-canned messages or emoji, or act upon emails coming in from Gmail. 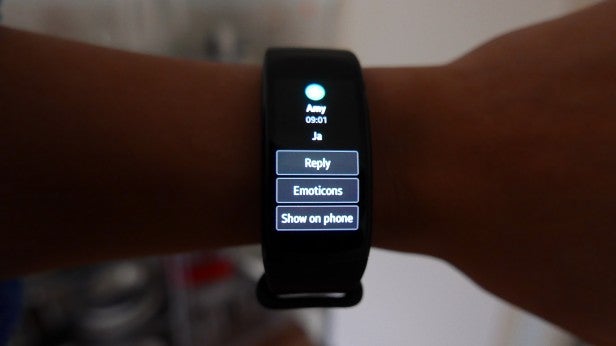 The big, colourful display is certainly a great help when it comes to displaying your notifications in a more useful way. 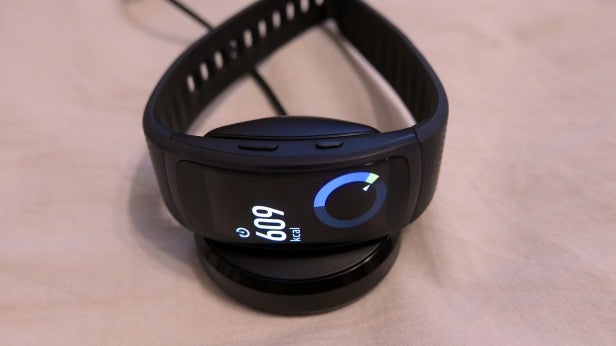 Where the Gear Fit2 comes up a little short compared to trackers such as the Garmin Vivosmart HR Plus is battery life. Typically, I managed around three days of use before needing a charge.

This is by no means a terrible amount, but the Vivosmart HR Plus does net you closer to a week – albeit with a much less fancy screen. It’s worth noting that I was getting this with the always-on display option turned off, but quite a lot of notifications popping up and buzzing on my wrist.

Dialling back the number of apps that ping you notifications will get you a little closer to four days, whereas turning on the always-on display will likely see you scrape through only two days of life.

A USB charging cradle is included in the box, and the Gear Fit2 docks magnetically. It connects really easily and it doesn’t matter which way round the Fit2 is docked, which is a nice touch.

Should I buy the Samsung Gear Fit2?

The Samsung Gear Fit2 is one of the smartest fitness trackers out there, striking a nice balance of exercise tracking and smartwatch smarts.

The only minor sticking point is its battery, so you’ll need to be charging more often than with some rivals. For me, however, this was an acceptable trade-off for the excellent display. The exercise tracking was great and I was really fond of the daily activity tracking, too.

But while the Samsung Gear Fit2 ticks a lot of boxes – certainly when it comes to the litany of sensors – it’s a little short of training insight. For more serious athletes, the Garmin Vivosmart HR Plus has the edge in terms of Garmin’s app providing useful training benefit and recovery insights.

However, if you’re after a more simplified experience with great notification management, the Gear Fit2 is a super choice.