Syncing the Gear Fit with a Samsung Galaxy S5 was easy, but we quickly ran into problems when testing its pedometer capabilities against the Jawbone UP24. The pedometer needs to be turned on
manually, and during our first day of testing it paused accidentally, which meant
running the test again. It seems a small point, but these are the kinds of things you shouldn’t have to think about when using a tracker like this.

Accuracy wasn’t immediately on the ball, either. On one day it concluded that we clocked up 11,980 steps and
burned 515 calories in comparison to the 15,571 steps and 785 calories
tracked on the UP24. The accuracy did, however, level itself for the rest
of the week and data was more consistent across the two devices.

The
more worrying issue is getting the data onto the phone and specifically
logged into the S Health app. Data does not automatically load up
unless you select to do it manually or through transfer intervals, which
start from 3 hours up to 24 hours. Finding where the data goes is a
problem. Checking the obvious places like the pedometer section and the
history tab fails to yield the data and we are still trying to work out
where it actually goes.

The run tracking accuracy indoors is
good and surprisingly reliable considering you are only using the
accelerometer and gyroscope and the motion technologies can often
produce wayward results. But when you take the Fit outside against a
GPS-based running watch the inaccuracies are a little more apparent.

As the image below shows, the Gear Fit slightly underestimated the distance run compared to the TomTom Runner, which has GPS built-in – I ran a marathon with the Runner recently and it measured the distance faultlessly. Non-runners may not appreciate the problem, but anyone who trains regularly will understand how such small differences can make a big difference, particularly over longer distances. 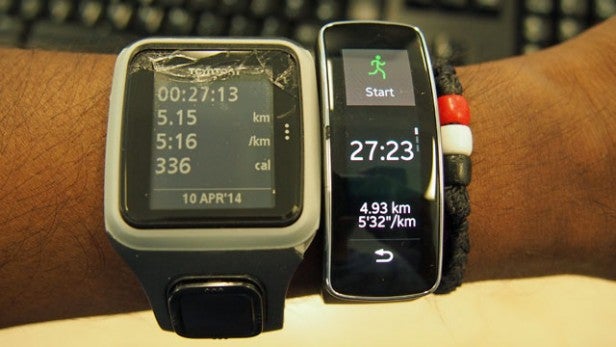 Additional
features include the ability to set goals against distance, time and
calories, but the most interesting feature is the coaching mode. Here you
can set a maximum heart rate and a duration for your run and when you
hit Start, the Fit will tell you vibrate slightly and tell you to ‘Speed
Up’ when you are falling away from your goal or ‘Keep up that pace’.

It’s
a really nice feature and is a great way to keep you pushing throughout
your run however we are sceptical how accurate the heart rate tracking
actually is. Hooking up a Bluetooth Smart chest worn heart rate monitor
to the TomTom Runner sportswatch, there was a 5 to 6 bpm difference
during our run, which is actually quite a lot.

Even using the
sensor for resting heart rate, which means you can’t speak or move, it
takes several attempts to register a reading, often prompting you to
re-position it. Against the Samsung Galaxy
S5 and the Samsung Gear 2 smartwatch it also gives inconsistent readings as the
image below illustrates. 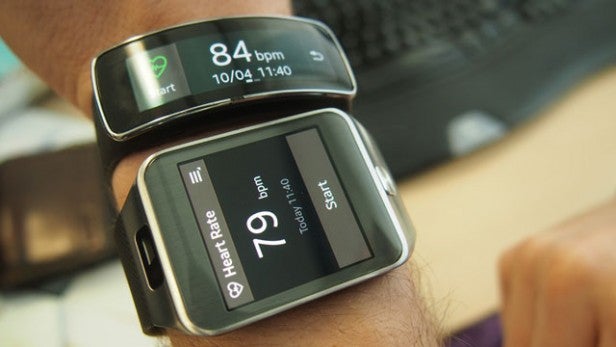 Sleep
tracking was not available when we first received the review model and
having now been added it does seem like a bit of an afterthought, especially when there’s no place in the S Health app to view the sleep
data. To switch it on you need to hit the record button before you go to
bed and then hit stop when you wake up as is the case with other
sleep-tracking enabled trackers. You’ll get a reading of sleep duration
and give you a percentage of how much of that sleep is motionless.

It’s
not the most captivating data, especially when you consider that the
Jawbone UP24 band and Fitbit trackers can indicate sound and light sleep
as well as how long it took you to fall asleep. The difference in the
volume of information is well, night and day. Indeed, even smartphones apps offer more detailed information.

Things
don’t get much better here, either. The Gear Fit features a 210mAh
battery, which Samsung says should get you around 3 to 4 days on heavy
use and five days on low usage. Compared to fitness trackers like the
Fuelband SE and the Jawbone UP24, which manage well over a week, this
doesn’t make for good reading. Even the sub-£100 Misfit Shine, which runs on a watch battery, can keep going for months.

Charging
it up to full capacity on the Monday afternoon it hit the 15% mark by
Wednesday afternoon and the Fit prompted us to consider recharging.
That’s with the wake up gesture turned off, so the screen doesn’t turn on
every time we move and with the brightness set to 4 out of 6 settings.

It
takes roughly two hours to fully restore its reserves so you are not
going to have to wait an age to put it back on, but you will have to be
prepared to keep that docking cradle nearby with such disappointing
battery life. 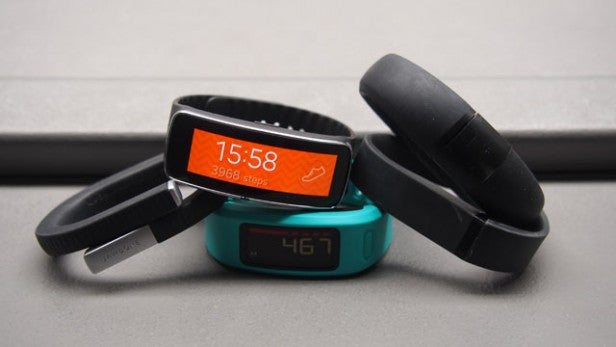 Should I buy the Samsung Gear Fit?

In
this current state, it’s very tough to recommend the Galaxy Gear Fit.
We love the big, bright screen, Samsung’s RTOS UI works well on the
display, the heart rate integration for exercise activities is
interesting and smartphone functionality works as advertised.

Unfortunately,
the hardware and software are riddled with issues. We have to question
the heart rate sensor tracking accuracy and the secureness of the strap
doesn’t fill us with much confidence that it won’t come off again. The
battery life simply isn’t good enough and the S Health app is a bit of a
mess in terms of logging data, with the lack of third-party app support a
major concern.

When you factor in that the Fit costs £180 and what it can do compared to leading wrist-worn fitness trackers like the Jawbone UP24 (£125) and the Nike Fuelband SE (£129), a really nice screen is the only the major difference and that’s not enough to buy the Fit instead.

Hopefully the likes of Sony and LG will look at the entire ecosystem and not just the hardware when the Smartband and LifeBand Touch
launch. If you really have to buy a fitness tracking band, we’d go with
the Jawbone UP24. Despite the lack of a screen it’s nice to wear, has a
great app and will help you make better sense of your data.

The Samsung Gear Fit is a great-looking piece of kit let down by so many things that fitness lovers should stay away for now.