What is the Samsung Gear Fit 2 Pro?

The Gear Fit 2 Pro is Samsung’s latest flagship fitness tracker, taking over from the older Gear Fit 2. It aims to take on super-swish fitness-focused smartwatches such as the Apple Watch 3, as well as more dedicated trackers, by offering cutting-edge hardware coupled with Samsung’s Tizen software.

The Gear Fit 2’s hardware is generally top-notch and easily matches, if not beats, the Apple Watch 3 when it comes to fitness. But there are issues with its battery life – and its ridonculous asking price makes it an expensive luxury.

The wearable comes with a rubberised strap (available in small and large) and has a slightly curved, rectangular, 1.5-inch Super AMOLED touchscreen main body. Two physical control keys lie on the body’s right side. The end result is a device that looks like a refined version of the Garmin Vivosport – which in my mind is no bad thing.

The slick, unassuming design makes the Gear Fit one of a select few fitness trackers I’d happily wear on my wrist 24/7. It also ticks all the right boxes when it comes to hardware and ruggedness. Unlike the original Gear Fit 2, the Gear Fit 2 Pro comes with the same 5 ATM water-resistance as the Apple Watch 3. This means it will survive down to 50m underwater.

Elsewhere, hardware changes have been kept to a minimum. The Gear Fit 2 and Fit 2 Pro’s AMOLED screen remains one of the brightest and sharpest I’ve seen on a wearable. The high brightness and vivid colours make navigating the Gear Fit2 Pro’s menus a doddle, ensuring it remains legible in the bright lighting conditions that render many competing trackers illegible.

I also remain impressed by the amount of tech Samsung has managed to stuff into the Gear Fit 2 Pro’s small frame. The main body is roughly 1cm thick and weighs a modest 34g. 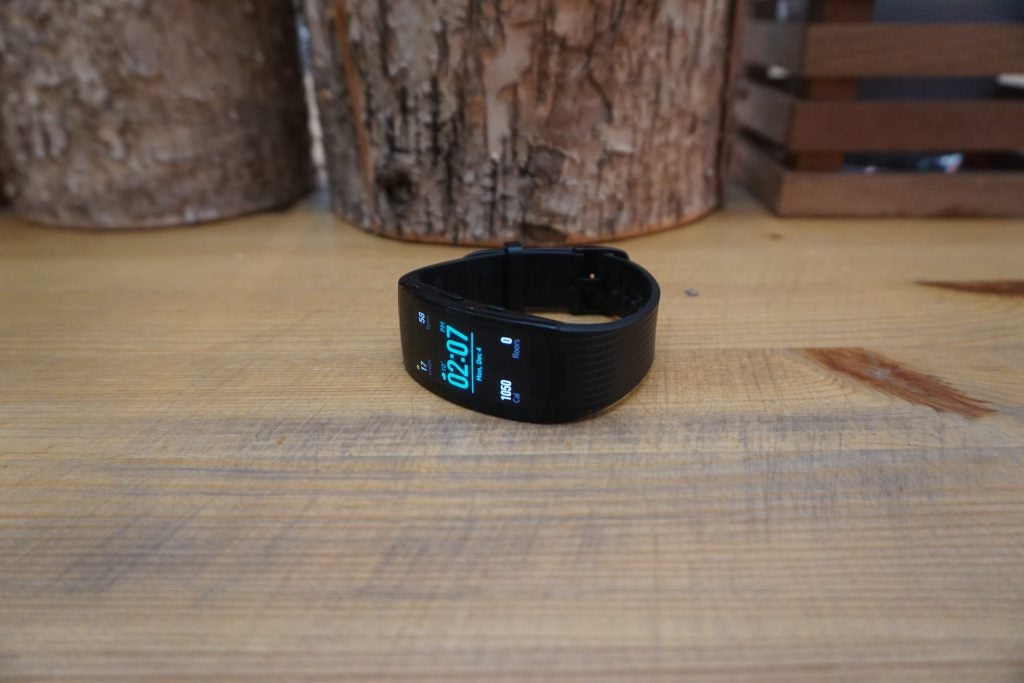 Despite this, you get 0.5GB of RAM, 4GB of onboard memory (2GB usable) plus an accelerometer, barometer, gyro sensor, HR sensor and GPS. The inclusion of onboard memory remains a particularly nice touch, since it means you can cache songs from compatible apps such as Spotify directly on the Gear. This removes the need to carry a phone or MP3 player with you if you want to listen to music while exercising.

My only minor quibble is that, despite the lack of significant upgrades, Samsung is charging £210 for the Fit 2 Pro. This feels a little extravagant when you can pick up a Fit2 for £180 at most stores. You’re basically paying £30 for waterproofing. 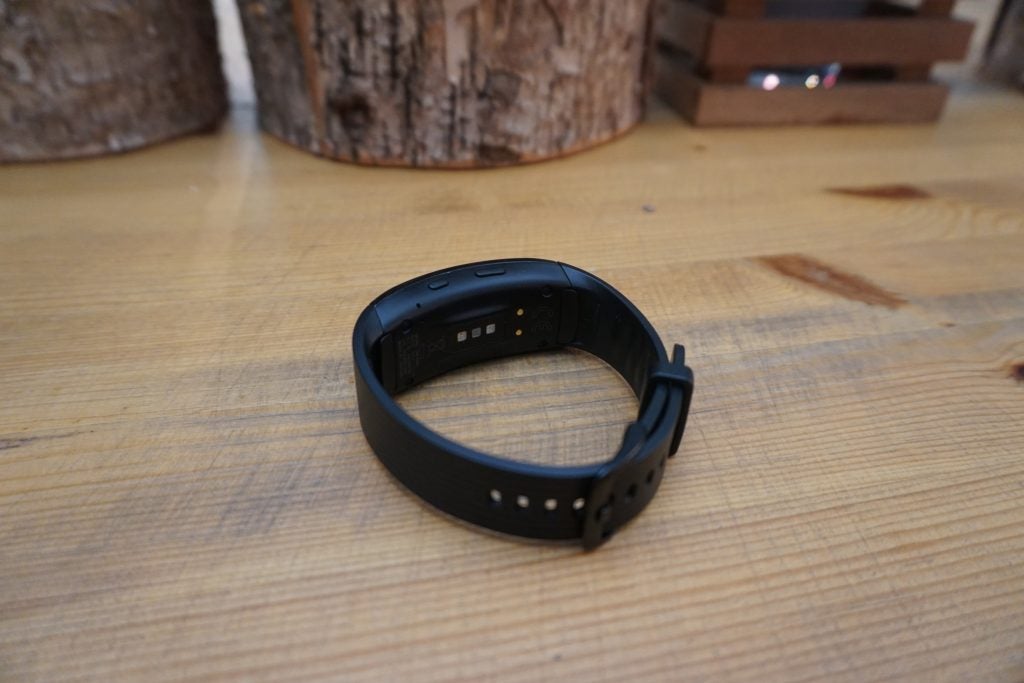 In the past, Gear wearables have always been let down by their Tizen OS. The Linux-based OS has a track record for being more than a little buggy, and used to feature a fragmented, slightly confusing user interface. Fortunately, these issues have largely been fixed on the Gear Fit2 Pro.

The Gear Fit 2 Pro works on both Android (tested) and iOS. The pairing process is pretty simple, requiring you to download Samsung’s Gear app then follow a series of on-screen prompts to connect the wearable to your phone. From there you pick which fitness and entertainment apps you want to install on the Gear Fit 2 Pro. Options include Samsung’s own Health app, plus popular third-party services including UA RECORD, Endomondo, MapMyRun and MyFitnessPal among others.

I’d like to have seen support for Strava and Runkeeper, but the suite of apps is more than good enough to meet most people’s needs, and generally covers the exhaustive list of sports that the Gear Fit 2 Pro can track. These include basic cardio, such as running, swimming and cycling, plus more specific activities such as tennis and basketball.

Tizen’s UI has also radically improved since Samsung first started loading it onto its wearables. The OS comes with a multitude of watch faces that let you pick the information you want on your homepage. From there you can swipe through left or right to scroll through notifications and activity data pages. The information shown is fully customisable and includes everything from your heart rate reading and current step count to the local weather. The top physical key acts as a home button that returns you to your primary watch face.

The lower physical key opens up a vertical list of installed apps and shortcuts to the Gear Fit 2 Pro’s settings. The interface isn’t groundbreaking, but it’s intuitive enough to enable most people to find the service or app they’re after without too much trouble. Even if you do struggle, the Gear Fit’s auto-detect features should cover most people. 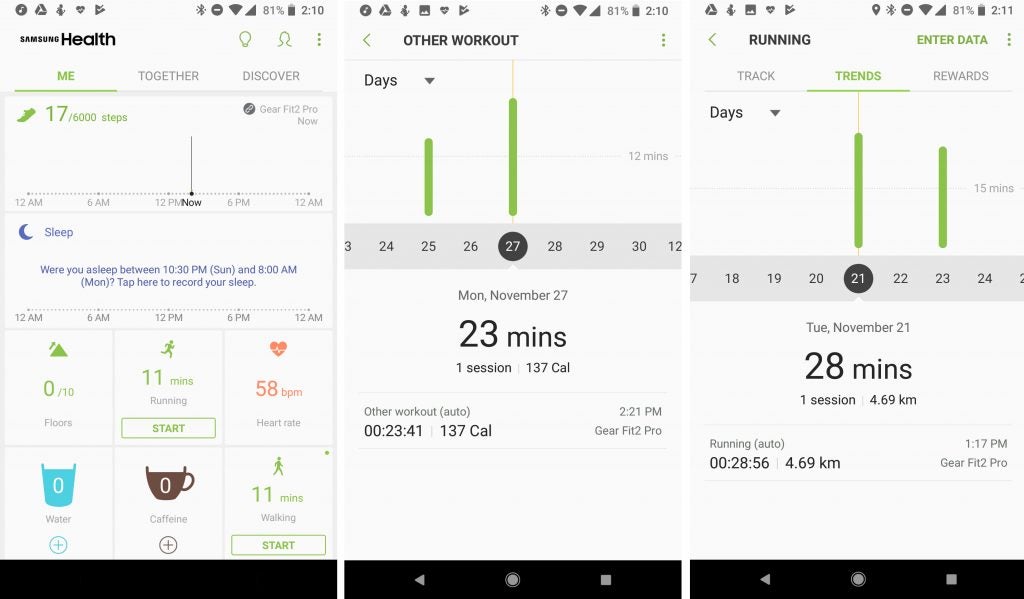 The Gear Fit 2 Pro can auto-detect when you’re exercising and auto-log the activity, removing the need for you to manually select this option when you head out for a run.

I’ve always been a fan of auto-logging trackers, and this remains the case with the Gear Fit 2 Pro, which does a decent job detecting basic exercises such as extended walks and park running.

Testing the Gear against the Garmin Vivosport and Vi Personal Trainer, auto-detected run distances were never more than 0.2-0.4km out of sync. The gap reduced to only metres when I manually informed the Gear of starting and stopping my run. The Fit 2 Pro also did a decent job of auto-detecting treadmill runs, something the majority of wearables struggle to do.

Like the regular Gear Fit 2, the Gear Fit 2 Pro’s heart rate monitoring is pretty decent for a wrist-based wearable. The readings remain uniform, which isn’t something I can say about all wrist-based trackers. It’s still nowhere near as accurate as ear-based monitors such as the Jabra Elite Sport, nor a dedicated HRM strap.

Step and stair-tracking was also suitably accurate: the Gear’s end-of-play reading was pretty similar to that of the Vivosport. Auto-tracking was a little more hit and miss with more complex sports, however – and, on occasion, was a little too sensitive for my liking.

Activities the Gear Fit 2 Pro can’t identify – working a boxing bag, for example – are logged as nebulous “other” workouts. These record the distance travelled, average heart rate and the estimated calories burned – which aren’t terribly accurate or helpful.

Normally I wouldn’t mind the lack of specifics, but the Gear had a tendency to record even minor activities as workouts. Three times over the past week the Fit 2 Pro has tracked me preparing my dinner – trust me, I’m not a very animated chef.

The mixed battery life is a bigger issue. Samsung quotes the Gear Fit 2 Pro’s 200mAh battery as offering three to four days of use from a single charge. I’m yet to see it consistently last even two days. Doing a quick half-hour workout most mornings and a 5km lunch run every other day, and with notifications on and the screen at 50% brightness, I generally had to charge the Gear Fit 2 Pro every other day.

Two days use isn’t terrible for a smartwatch, mind. But considering this device’s focus on being a fitness tracker that’s meant to monitor your daily steps, heart rate, sleep and exercise habits, 24 hours a day, these figures aren’t good enough. Also slightly odd was the fact that we got much better battery life out of the older Gear Fit 2 review unit. 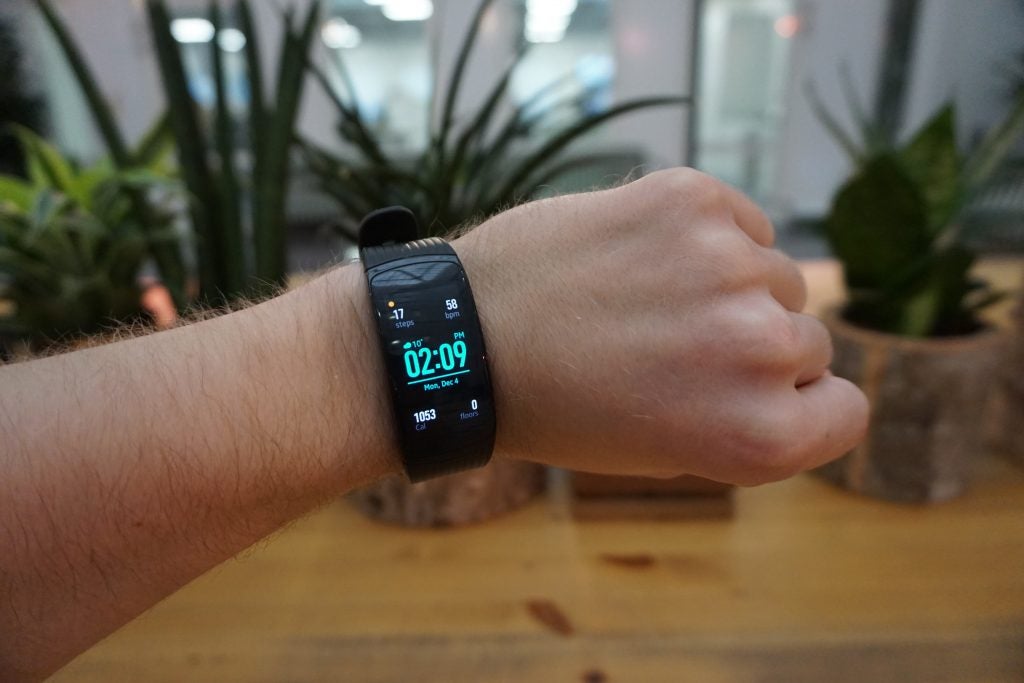 If you’re after a solid fitness tracker with a sprinkling of smartwatch services, the Samsung Gear Fit 2 Pro is a good choice. This unassuming wearable offers the solid activity tracking and reliable notification services that made the Gear Fit 2 great, but with the added perk of waterproofing.

However, issues with its battery life and a lack of significant changes beyond its ATM rating make it an expensive choice for fitness fans. If you’re not a swimmer, the original Gear Fit 2 is a more cost-effective option. Plus, there are cheaper dedicated trackers for people unconcerned about smartwatch functionality.

A solid fitness tracker/smartwatch hybrid, but it’s a smidgen overpriced.