Powering the Gear Neo 2 is a dual-core processor with 512MB of RAM, and while you won’t zip through homescreens like you can on an Android 4.4-packing smartphone, it’s a relatively smooth and slick to navigate the interface and launch applications. There’s also 4GB of storage for packing on music, photos and videos up to 720p HD. Bluetooth 4.0 connects smartwatch to smartphone or tablet of which there’s 17 Samsung-only devices that are compatible. That includes the Samsung Galaxy S5 and the Samsung Galaxy Note 3. Sadly, there’s no love for Apple or other Android-running phones or tablets.

What does this let you do? In terms of the specific phone features, you can answer and reject calls, view call logs, use the dialler and view contacts pulled through from your phone. There’s no way that taking a call is ever going to look anything other than ridiculous, however, and call quality is not great when you do take a call and often sounds muffled and crackly. 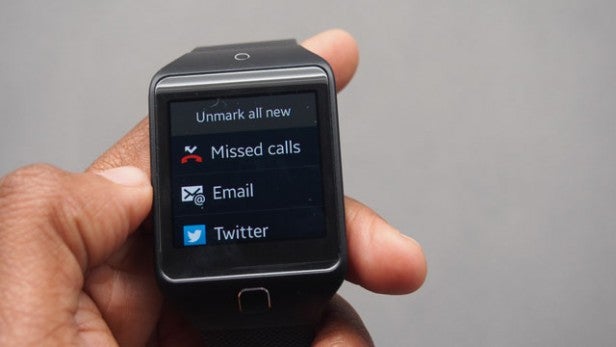 Notifications is one of the more interesting and successful elements of the Gear Neo 2, although it’s inconsistent in the way it works across different applications. You can check email, text messages and quickly see missed calls, but there’s greater value in the additional notifications services you can set up for apps downloaded to your smartphone like Facebook or Twitter.

The only problem is that some third-party apps give you more information than others. Twitter will just tell you someone has mentioned you while in Facebook it will actually display the comment. It’s not perfectly executed, but this something where smartwatches like the Gear Neo 2 can be a little bit useful.

Some of the features that lend itself nicely to a smartwatch are the Media Controller and the WatchON Remote that uses the inbuilt IR blaster. The media controller works just like it does on the Gear Fit, letting you navigate music playing from your smartphone whether its Google Play Music or a third-party service like Spotify. The Bluetooth support means it also works with wireless headphones if you decide to store music on the Gear Neo 2. Specific app support for services like Spotify or Deezer would make this a really great feature.

WatchON Remote is basically a TV remote control that can also be configured to work with set-top boxes from Sky, Virgin and Freeview boxes. We tried setting it up with a Samsung and LG TV and with a clear line of sight to the IR blaster it was nice and easy to connect the two. It’s when you actually try to change the channel or even turn the volume up when it all becomes a very clunky experience and feels like an opportunity missed. 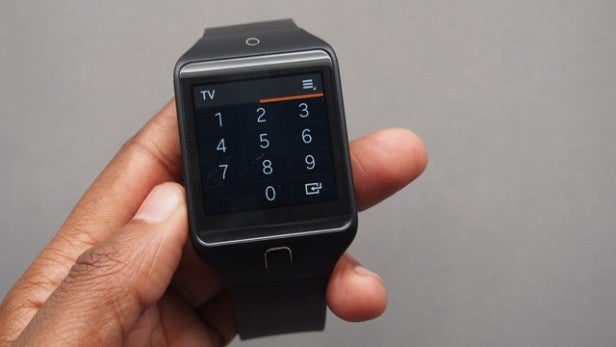 Samsung is making a big push on fitness with its smartphones and smartwatches and like the Gear Fit, the Gear 2 Neo gets all the same exercise-centric features. The biggest one of them all is the heart rate sensor. Situated at the base of the watch, it works in exactly the same way as it does on the Gear Fit, flashing a green light against your skin to provide the reading. It can measure resting heart rate and has been integrated into the specific training and coaching features that aims to push you harder in training.

In principle it’s a great idea, but after taking it out on several runs the inability for the watch to stay put meant it dropped in and out of the coaching mode that relies on the heart rate sensor data. Without GPS you have to rely on the accelerometer to track distance and this is generally accurate, although the ability to calibrate for greater accuracy would be nice.

Elsewhere there’s S-Voice, where you can tell your watch to call someone in your contacts book, but this barely worked in the several times we tried it. Find My Device means you can use the smartwatch to locate the whereabouts of your phone and vice versa. Voice Memo let’s you record low quality voice messages and features like the schedule, timer, stopwatch, weather and gallery are pretty self-explanatory.

Overall, then, the core features sound numerous, but the reality is a little more mundane. Some of the basics work well, but many are hit and miss or just plain ineffective, while others just don’t seem necessary.

This weakness is further accentuated by the lack of useful apps. Indeed, This is undoubtedly one of the biggest problems that both Samsung smartwatches suffer from. There just aren’t enough apps and the ones that do exist are pretty useless. Skip through the different categories in the Samsung Apps section inside the Gear Manager and there’s roughly 30 to choose from, most of which are clock faces or calculators. Despite the Gear Neo 2’s fitness credentials there’s just one app in the Health/Fitness category. The most high-profile inclusion is news aggregator Feedly.

To get the app to your device you need to download and install the phone version as well as the smartwatch version. Once installed, it’ll appear in the Apps section ready to be used. You can move apps onto the other homescreens by pressing down on the icon and moving it, but in our experience the app icon continually disappeared and returned back to the app icon folder. 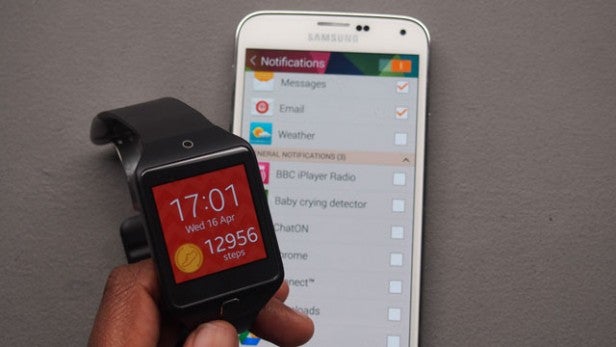 When you launch Feedly, the app pulls in a small low-quality image with the headline and the ability to swipe to down to save for later or swipe up on the screen to read on your phone. The content is then pushed to the smartphone and opened automatically.

The fact that the Gear smartwatches run on Tizen and not Android is clearly a problem here. Samsung’s own operating system is still very much in its infancy and it shows with the distinct lack of app support for one of the first Tizen-running devices to go on sale.