The Samsung Galaxy Tab Pro 8.4 runs Android 4.4.2, with the usual Samsung custom interface on top. It’s the same version found on the other Tab Pro tablets, but lacks some of the visual tweaks we’ve seen recently in the Galaxy S5.

The custom TouchWiz interface is functional and feature-packed, but is not the most accessible or the most visually streamlined of systems. 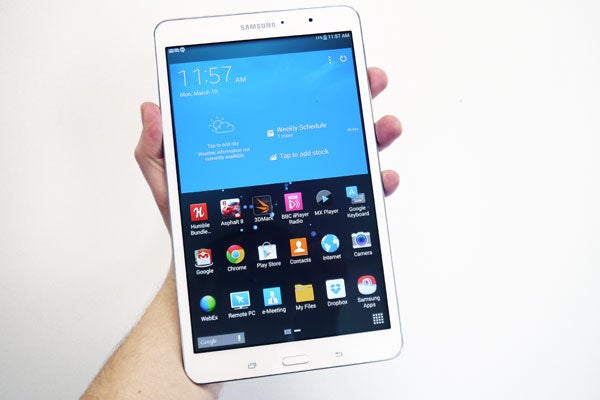 Performance is also a little patchy – not something we expect when the Samsung Galaxy Tab Pro 8.4 uses the Snapdragon 800 processor. It was one of the fastest mobile processors of 2013. It has since been superseded by the Snapdragon 801, but there’s not a huge difference between the two.

There are occasional stuttery moments when using the Samsung Galaxy Tab Pro 8.4, and we noticed a few basic interface glitches during use, such as widgets distorting when switching orientation and the Magazine home screen crashing during use. Even just pulling down notification windows is bizarrely jittery. We saw odd performance niggles like these late last year in the Samsung Galaxy Note 10.1 2014 Edition, but they don’t seem to have been fixed yet.

Benchmark results show that this tablet still has plenty of power on tap, despite software optimisation issues. It scores 2893 in Geekbench 3. This is what we’d expect from a Snapdragon 800 device, and it roughly matches the Sony Xperia Z1, and beats the rival Nexus 7 and LG G Pad 8.3 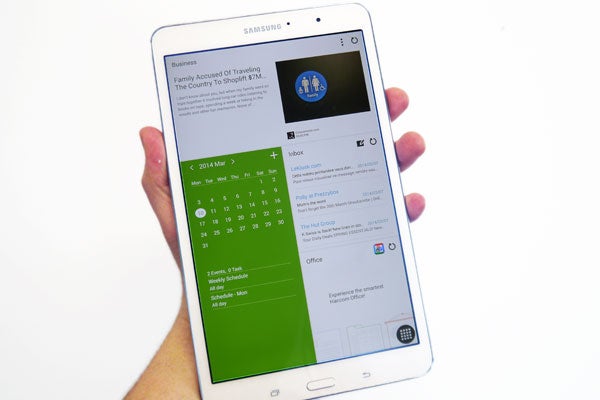 Such power means the Samsung Galaxy Tab Pro 8.4 can handle high-end games with relative ease. We tried out Real Racing 3, Asphalt 8 and Dead Trigger 2 and general performance in all is good, with just the occasional frame rate drop that is to be expected of the imperfect optimisation of virtually every Android game.

After playing for a while, the Tab Pro 8.4 gets a little warm, and heat is centralised in one key spot by the left edge of the tablet. Unfortunately, you’re likely be holding this part if you’re using the Tab Pro 8.4 in portrait aspect. But it does only get warm rather than dangerously hot, and it only becomes noticeable when playing processor-intensive games rather than more easy-going apps. 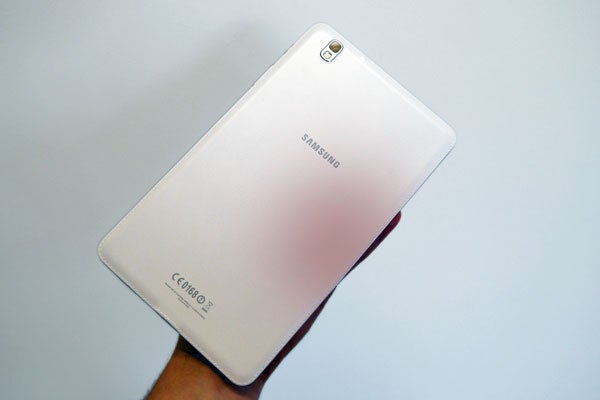 As a ‘pro’ series device, the Samsung Galaxy Tab Pro 8.4 comes with a bunch of business-leaning apps pre-installed. Here’s a quick list of what you get, and what they do:

WebEx – an app that lets you have virtual meetings using the WebEx standard.

Remote PC – lets you remotely access your computer using the tablet. This is Samsung software, so you won’t find it in many other tablets.

e-Meeting – Another Samsung joint – it’s a shared virtual whiteboard you can use for virtual meetings. You can also share files using the app. It’s handy, but the other attendees need to have the app too. 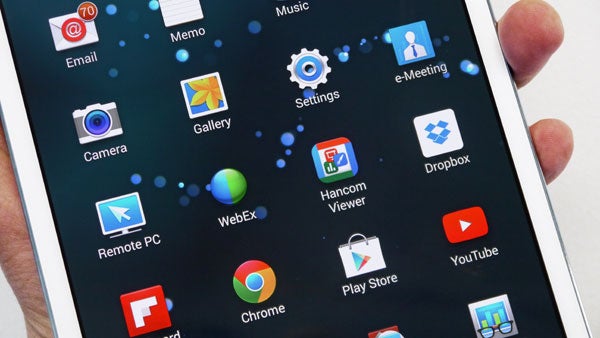 Like just about every Samsung phone, you get S Planner, Samsung’s own calendar app too. And 50GB of Dropbox storage for two years.

Samsung has also fiddled with the operating system to offer some extra features. Perhaps the most notable is Multi Window. This lets you run two apps at once, splitting the screen and letting you choose how much space each one gets.

The Magazine screen is also present in the Galaxy Tab Pro 8.4. It’s another set of homescreens that offers a view of your calendar, emails and aggregated online news sources.  It is effectively a skinned and tweaked version of popular app Flipboard – check it out if you want to know what Magazine is roughly like.

Extras like Multi Window and Magazine are what help separate Samsung’s tablets from the competition. But they also make the Tab Pro 8.4 a little less easy to get on with at first, and likely contribute to its performance issues.