The Galaxy Tab S6 Lite is a solid tablet for its target market. But issues with unoptimised apps and a slightly under-powered CPU mean power users and creatives will be better off looking elsewhere.

The Samsung Galaxy Tab S6 Lite is the latest Android tablet to attempt to take on Apple’s ruling vanilla iPad.

It aims to entice buyers away from its arch-rival by offering a near equivalent set of features, plus a few added bonuses – chief of which are an included Samsung S Pen stylus and wealth of custom notation apps.

It comes during an interesting time for Android tablets, with most companies, including Google having thrown the towel in many moons ago. The Galaxy Tab S6 Lite’s only real competition comes from the Huawei Mediapad M5 Pro, which targets a more premium segment of the market and doesn’t feature access to most Google services, including the Play Store, as a result.

This means the Galaxy Tab S6 Lite is one of the best Android tablets around, and will be more than good enough for people on the market for a mobile Netflix station or study aid during lectures.

Niggling issues with Android on a tablet stop it being the iPad-killer and the best tablet it sets out to be, however. 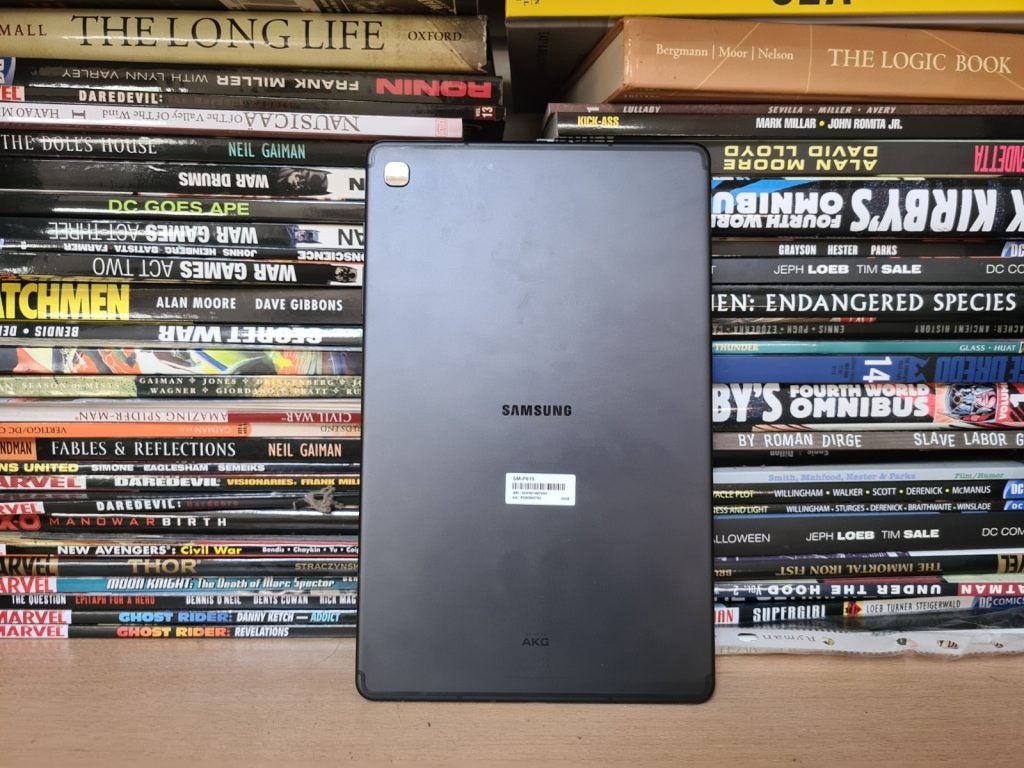 The Samsung Galaxy Tab S6 has a retro design

Tablets these days, including the iPad, don’t have cutting edge designs. Despite improvements to the underlying hardware, most still have giant bezels and designs that haven’t radically changed in close to half a decade.

This remains true with the Galaxy Tab S6 Lite. The device has a single piece unassuming metal chassis, that looks like pretty much every other £300-£400 Android tablet I’ve tested in recent memory. You’ll find volume and power controls on its long right side and a button free front with a sizable bezel around the screen.

Thankfully the device does tick all the right boxes when it comes to portability and build quality. The metal used is surprisingly scratch resistant, even on the dark grey colouring I tested.

Measuring in at 244.5 x 154 x 7mm and weighing 467g the device is also thin and light enough to be carried one-handed and fit into most regularly sized bags.

The extras Samsung’s loaded it with are to be applauded. Unlike its iPad competition, Samsung’s bundled the Tab S6 Lite with an S Pen stylus. The stylus isn’t as comfortable to hold as the Apple Pencil, but it’s functionally excellent. Unlike the Apple Pencil, it offers enough resistance to feel like a regular pen when jotting down notes or doing quick sketches on the tablet. 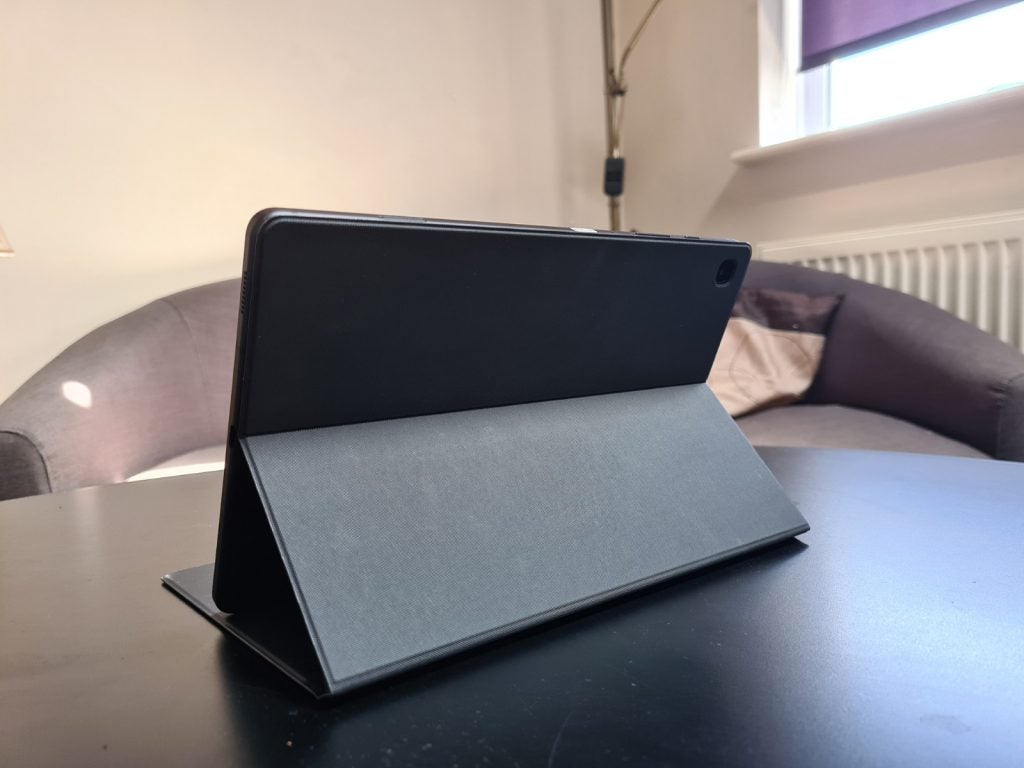 At the time of publishing Samsung’s also offering a free Book Cover with the tablet. The cover isn’t as fancy as the iPad’s new Magic cover, and it doesn’t come with any form of keyboard, but it’s still super useful, especially if you plan to use the tablet on the go. As well as offering added protection it lets you set the tablet to free stand at two angles and has a magnetic dock for the S Pen. It sells for around £60 as a standalone product so the fact it’s free at the moment isn’t to be sniffed at.

My only slight qualm with the design is that it doesn’t have any form of IP water resistance rating. Not many tablets do at the moment, so the omission is forgivable, but it does mean you’ll want to avoid getting the Tab S6 Lite wet, which will be a hindrance to people that want to use it outdoors.

Camera performance is never stellar in a tablet, but the Tab S6 Lite’s rear camera is fine for basic snaps in regular lighting, though if you have an even moderately decent smartphone you’ll likely be better off using it. It’s a similar story for the 5-megapixel front camera which is good enough for video calling, but you’d want to avoid using it for selfies. 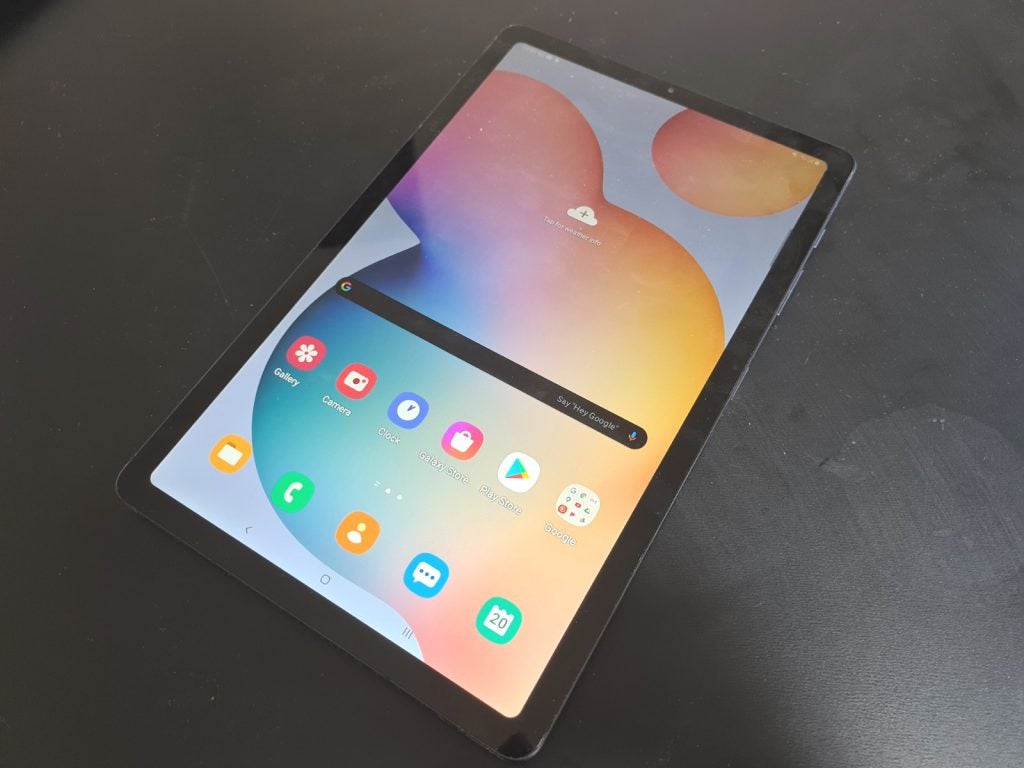 Samsung’s mobile AMOLED displays are some of the best in the business, a fact demonstrated by the stellar screens sported on its current Galaxy S20, Galaxy S20 Plus and Galaxy S20 Ultra smartphones.

The tech offers wonderfully deep, inky blacks that are missing on most LCD screens. Which is why I’m a little sad the tech hasn’t been used on the Tab S6 Lite. Instead the tablet comes loaded with a 10.4-inch, 2000 x 1200 resolution, TFT screen. The use of a TFT panel isn’t a deal breaker however due to the tablet’s cost. Even the more expensive Huawei M5 Pro features an LCD screen.

The performance is also more than good enough for casual and educational use. Colours don’t look overcooked and the resolution is sharp enough for text and icons to remain legible, even on apps that haven’t been properly optimised for the S6 Lite’s tablet form factor. The only time the lower than normal resolution is noticeable is when watching video content. Here the drop is noticeable, especially when moving from a new iPad.

Whites can on occasion look a little dirty and viewing angles could be a little wider. But these omissions are forgivable given the strong max brightness levels, which are good enough for the tablet to remain legible in sunlit conditions that rendered my old 2018 iPad unusable.

Audio performance is good, but not iPad level. The twin dual speakers sit on the short sides of the tablet and have been tuned by AKG, an audio firm owned by Samsung. They’re good enough for Netflix streaming, offering reasonably good max volumes and tonal balance. But they’re nowhere near as detailed as the speakers seen on even the most basic iPad. The low end is also noticeably weaker. Rumbling engines and gunfire in movies and games uniformly aren’t as powerful as they are on the iPad. 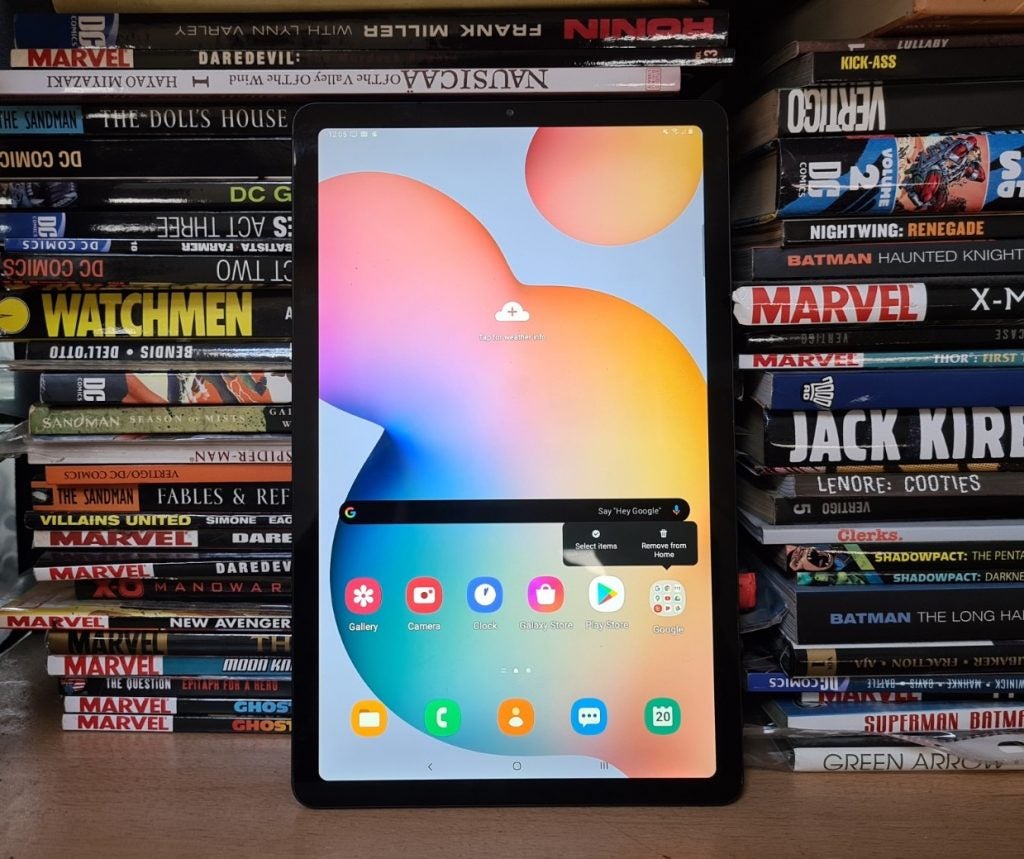 The Galaxy Tab S6 Lite doesn’t on paper match its rivals specs being powered by an Octa-Core Exynos 9611 CPU and 4GB RAM, but it still manages to deal with all the basic tasks you’d expect.

With real world use the tablet’s more than powerful enough for note taking, streaming video and surfing the web.

Note taking is particularly good as Samsung has loaded the tablet with a few atypical apps and features that make it quick and easy to take advantage of the S Pen.

A small icon pops on screen whenever you hold the S Pen close to it. It features quick shortcuts to things like “create a note”, “screen write”, annotate and AR doodle. The features are small but they’re super useful when doing things like annotating a document or leaving comments on a spreadsheet.

The chipset does sometimes jitter when tasked with more demanding tasks, however. Downloading multiple apps the Tab S6 Lite did slightly slow down and I occasionally chugged running demanding 3D games in high graphical settings, like PUBG. Even then, performance was still solid enough for the game to remain playable.

The only real performance issue is that the chipset isn’t 5G or Wi-Fi 6 ready, which will be a problem down the line when the new connectivity tech becomes standard.

The biggest issue afflicting pretty much every Android tablet I’ve tested since the original Nexus 7 has been the fact Google’s OS isn’t designed to work on such a large form factor. It’s firmly a mobile OS. This is why certain apps look odd running on larger tablets and the general UI isn’t as intuitive to use as iPads, which run Apple’s tablet-focussed iPadOS.

Both these issues remain on the Galaxy Tab S6 Lite which runs Android 10 with Samsung’s One UI skin. The primary issue is particularly annoying for creative users looking for an affordable alternative to the iPad Pro. The fact is the Play Store doesn’t feature enough apps with full fat stylus support to satisfy creatives, the same way iPadOS does.

One UI is another minor annoyance. The skin isn’t the worst I’ve tested thanks to its touchscreen optimisations, but it still isn’t as good or clean as native Android. Going in you’ll still find a few duplicate apps for things like calendar and the custom icons used to replace Android’s native ones aren’t as nice, in my opinion. 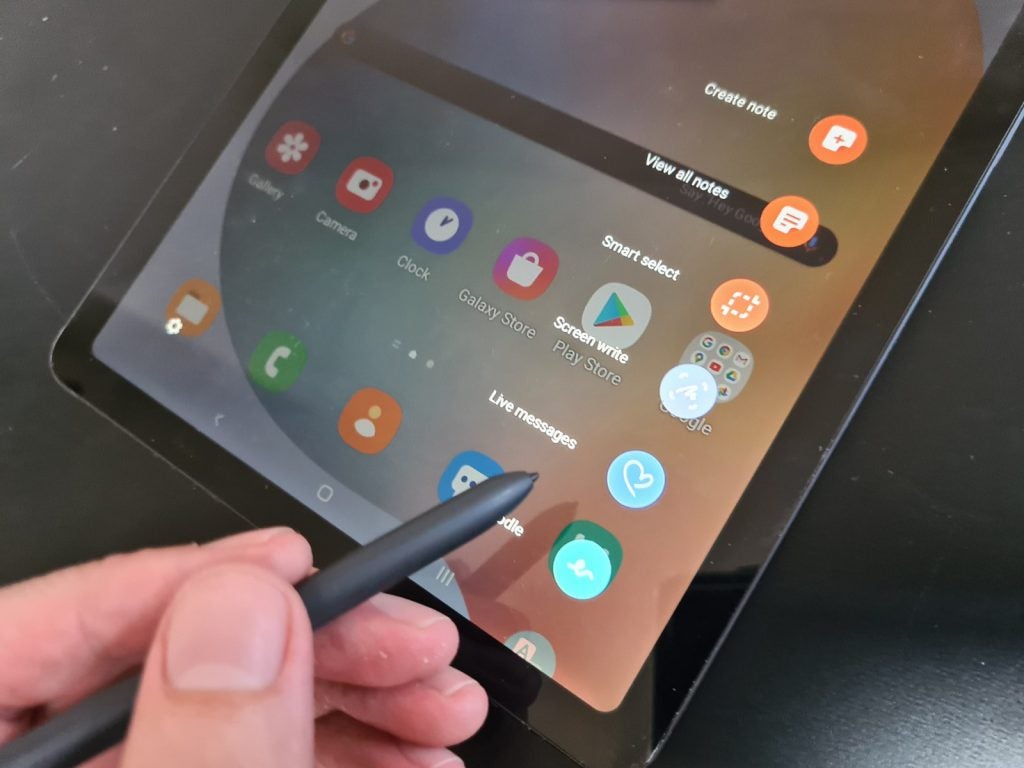 With real world testing I found the Galaxy Tab S6 Lite generally lives up to Samsung’s forecasts. Using the device as my main personal tablet I easily got a full week’s use out of it before needing to give it a top up charge with regular use. This entailed streaming Netflix during the morning and evening, sporadically browsing the internet and a quick game of PUBG before bed each day.

More demanding processes do put a bigger drain on the battery however. Streaming video over Wi-Fi the tablet discharged an average of 8-10% of its charge per hour. Gaming the average drain increased around 15% per hour. These figures are pretty standard for a tablet the Galaxy Tab S6 Lite’s size, however.

Should I buy the Galaxy Tab S6 Lite?

If you’re a student, or casual users looking for a mobile note taking station or portable way to stream video but don’t fancy an iPad, then the Samsung Galaxy Tab S6 Lite is a decent option. It comes with a decent S Pen stylus, reliable battery life and solidly-made, satchel friendly design. Issues with its slightly under-powered CPU and unoptimised Android skin mean creatives and power users should look elsewhere, however.