Anyone familiar with Samsung phones and tablets will be right at home on the Galaxy Tab S 8.4. It runs Android 4.4 with Samsung’s cheery and colourful TouchWiz UI on top. On tablets the main features include Multi-Window and the Magazine UI.

Multi-Window is quite useful as it lets you run apps side-by-side and copy information between them. It’s not something you’ll use everyday and is probably more useful on larger tablets like the Galaxy Tab S 10.5, but when you do use it you’ll be glad you have the option.

The Magazine UI is less successful. It offers up large widgets in the form of tiles, combining widgets for your calendar, email and social networks with news and content via Flipboard. The planner is kind of useful, but you must use the Email app (not Google’s Gmail app) to use the Email widget, while the social widgets just don’t work very well. There’s a music tile too, but again only for Samsung’s music app.

As for the Flipboard integration, tapping a top story in any category just opens that section of the app (not even the story). The idea sounds nice on paper, but we’d sooner just use Flipboard’s own widget than Samsung’s system. We wouldn’t mind too much were it not for the fact you can’t easily disable the Magazine UI — you have to install a new launcher to get rid of it. 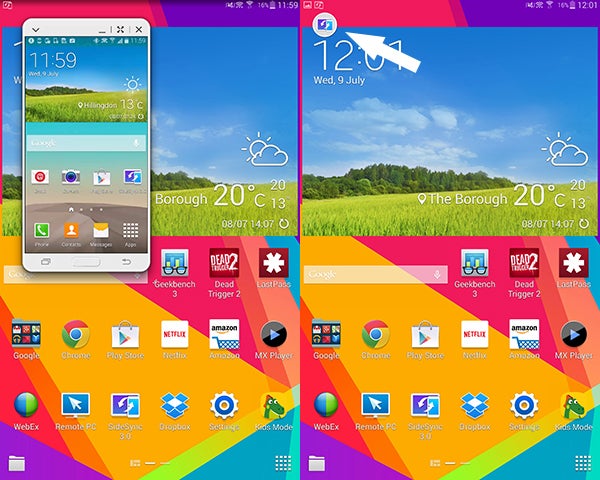 The phone is accessible as a picture-in-picture and minimises to a small, round icon

If you’re Samsung phone owner as well, one feature that makes the Tab S more attractive is SideSync 3.0. This uses Wi-Fi Direct to let you control your phone on your tablet — it’s just like a virtual desktop, but with your phone and tablet.

It’s a neat little feature as you can take calls and control every aspect of your phone from the tablet. You can even copy and paste data between the two. The only caveat is you have to actively engage the feature on both for it to work — it’s not a ‘passive’ feature that simply works when you’re on the same Wi-Fi network. Still, it’s a nice to have for when you need to leave your phone to charge. 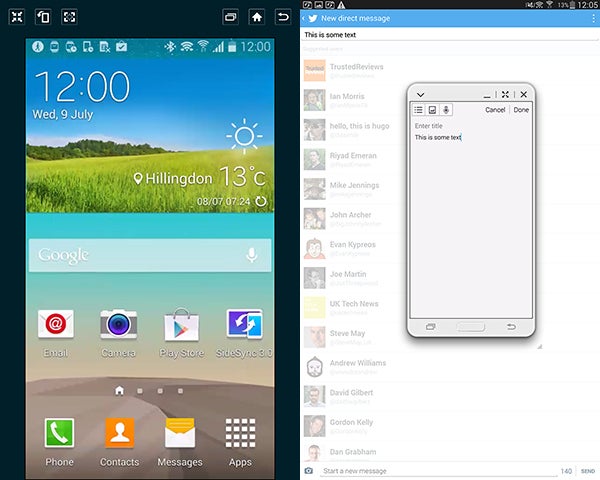 The Galaxy Tab S 8.4 is, generally speaking, very smooth and slick. The kinks and jerkiness we detected in the Tab Pro 8.4 are mostly absent, though the Tab S 8.4 doesn’t zip along quite as smoothly as the Snapdragon powered Galaxy S5.

The processor behind this is Samsung’s Exynos 5 Octa (5420), which is in eight core chip with four ARM Cortex A15 CPUs clocked at 1.9GHz, and four lower-power ARM A7 cores at 1.3GHz. It’s right up there with the most powerful processors on any Android phone or tablet, scoring 904 in Geekbench’s single-core test, and 2,669 in the multi-core. Even accounting for Samsung’s reputation to boosting benchmarks with high performance modes, it’s clear this is a very powerful device — it’s only slightly slower than Galaxy S5, HTC One M8 and OnePlus One.

It’s a slightly less impressive performer in the graphics department, though it’s still more than powerful enough to run even demanding games smoothly. It scored 13,518 in the 3D Mark Ice Storm Unlimited test, whereas the latest phones are getting close to 20,000 these days. It’s only a few thousand points less than the iPad mini 2, though, and you’re unlikely to find any games that won’t work on it. As with most phones and tablets at present, the Tab S has more processing power than it really needs.