It doesn’t really matter whether you understand the above, though. Just remember this: it’s the best screen on any tablet. No argument. It’s bright, very colourful and the contrast and quality of blacks is out of this world. There isn’t a better tablet for watching HD videos on than this. They look stunning. 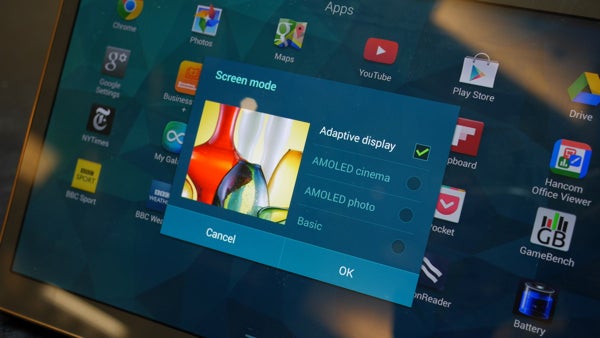 Viewing angles are excellent. Again, they’re better than the Galaxy Tab S 8.4 as there’s no slightly off-putting colour caste on this version. Outdoor visibility is excellent, too. The iPad Air has a very good screen, but this is better in every way.

Provided, that is, you turn off Samsung’s Adaptive Display tech. The gumpf suggests this adjusts white balance and colours in supported apps based on ambient conditions. But the less desirable quality is it over-saturates colours to an irritating degree. We concede some people like this ‘radioactive’ look, but those people are wrong… so there.

But set it to the ‘Basic’ mode and you still get outstanding detail and contrast, but also accurate colours. The Photo mode is worth trying if you’re photographer as it supports the Adobe RGB colour space. For most people, though, switch it the basic and enjoy. You won’t regret it.

By comparison, the Galaxy Tab S 10.5’s software is merely competent. The core is Android 4.4, but there’s Samsung’s TouchWiz and Magazine UX added to it. The basic UI is decent enough and runs smoothly, but we find the Magazine UX restrictive for two reasons.

One, it’s mandatory — you can’t remove it, only reduce it. The other is you have to use the ‘core’ Email and Calendar apps to get the most from it. Choose to use Google Calendar, Gmail or any third-party app and the quick planner tiles become useless. The news feeds, powered by Flipboard, are marginally more useful, but all they do is open the app in the appropriate section.

This lack of flexibility goes against the grain of Android’s ethos. 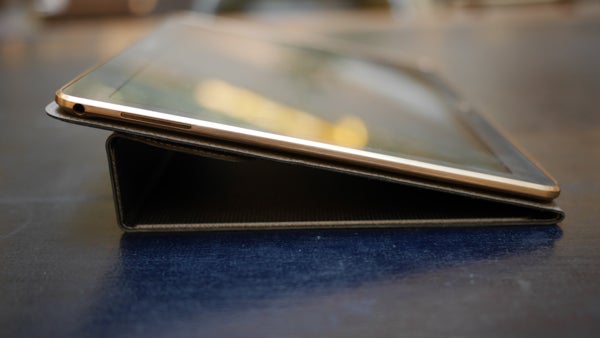 The more impressive software addition is the split-screen options. This lets you open apps side-by-side. For example, this lets you watch a video and have a chat window open at the same time, or copy and paste text from an email to a document. It’s useful and it works even better on a large tablet like this.

One other addition is SideSync 3.0. This lets you control any compatible Samsung smartphone using your tablet. The idea is you can take calls and respond to messages from your phone, even when it’s in another room. It’s a neat little feature, but you have to actively enable it. This means it’s something you’ll use every now and again, rather than all the time. 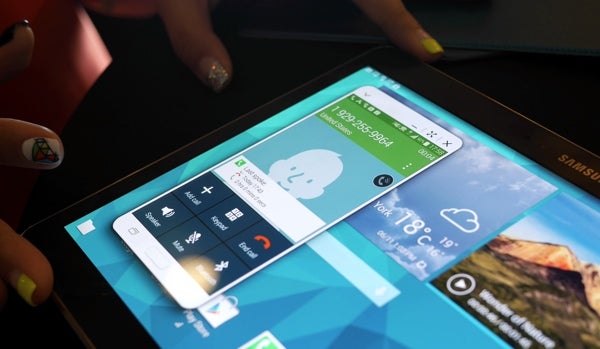 The bottom line here is the Galaxy Tab 10.5 is fast. Not as fast as the top-end phones like the Snapdragon powered Galaxy S5 and OnePlus One, but still more than powerful enough. It scores 2,669 in the multi-core test in Geekbench 3, which puts it in the top 5%.

It suffers a little more in the graphics department. Here, more powerful phones and tablets like the Nvidia Shield Tablet have a noticeable advantage. This shows in a 13,500 score in the 3D Mark Ice Storm Unlimited test, which falls a long way short of the 20,000 or so of the top phones.

But most people won’t notice this difference in actual games. We couldn’t find any game on Android that didn’t run smoothly or look good. The middling graphics performance should only concern serious gamers.