Although well-equipped for the great outdoors, the imbalance of performance and price means the Tab Active 2 only holds niche appeal.

What is the Samsung Galaxy Tab Active 2?

Born into the business world with a feature set, ruggedised design and third-party accessory lineup perfectly suited to its life in warehouses and on fleet trucks, the Galaxy Tab Active 2 sat happy as a tool for the modern workforce. Now it’s been pushed beyond these bounds as Samsung tries to find a new home for it in the consumer space.

When it comes to ruggedised tablets, the spectrum ranges from the likes of Amazon’s Kids Edition slates to members of the ultra high-end, high-priced realm, such as the Panasonic Toughpad series. The Galaxy Tab Active 2 falls somewhere in between the two.

At £439 the Active 2 is by no means ‘cheap’, but for some, the option of a toughened 4G LTE-capable slate that’s more comfortable in the woods than it is on a coffee table makes for a purchase worth considering.

The Samsung Galaxy Tab Active 2 has a removable back, a rarity in this day and age, followed by a protective outer cover that adds improved impact protection and better grip than the slick plastic finish of the tablet itself.

This should come as no surprise considering the term ‘ruggedised’ is involved, but as 8-inch slates go, the Active 2 is decidedly chunky. Despite this, it’s still narrow enough to clutch comfortably in one hand and light enough to wield for extended periods of time. 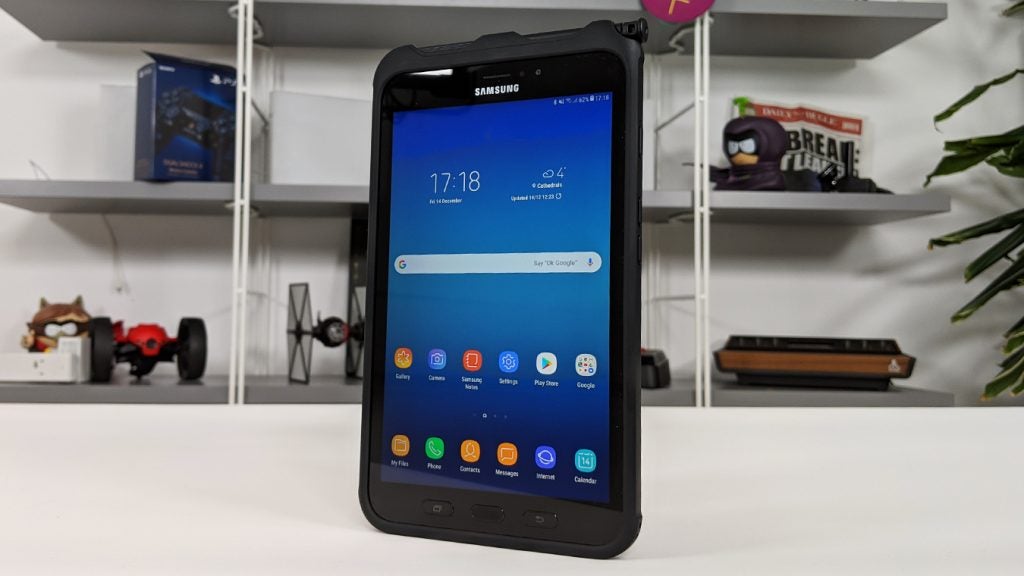 While the pogo pin connector on the side of the Active 2 will likely see far less use outside of the business market, the tablet also packs in a headphone jack and USB-C port along its bottom edge. In addition, it features hardware controls, not just along the side for power and volume, but beneath the display as well.

Usually, I’d berate an Android device for opting for hardware-based navigation controls in 2018 but on the Active 2 their presence makes total sense. Paired with the tablet’s increased touchscreen sensitivity toggle, the buttons make for far easier operation should you be wearing gloves or have wet hands; ideal if you see yourself taking this tablet on a camping trip to colder climbs.

Most likely as a result of the B2B use cases it was originally designed for, the Active 2 benefits from the inclusion of Samsung’s signature stylus. Unlike the recently launched Samsung Galaxy Note 9, the Active 2’s water-resistant S Pen doesn’t slot inside the body of the tablet itself. Its designers were at least considerate enough to integrate a holster into the top edge of the included bumper case though; a small mercy that’s easy to take for granted but would be sorely missed were it omitted from this Tab’s design.

The Tab Active 2 isn’t just a tough-looking slate, it’s both IP68 and MIL-STD-810G certified, meaning you needn’t worry about it falling into a puddle, mud or against hard ground.

Just be aware that as with any water-resistant Samsung smartphone or tablet, the Active 2 will warn of “moisture in the USB port” after taking a dunk and will need to be thoroughly dried out before accepting a charge again.

The 8-inch 16:10 panel on the Active 2 is perfectly usable but it’s far below what I would expect for a £400+ tablet in 2018, even one that focuses its efforts on ruggedised protection above all else.

For starters, the screen sports an underwhelming WXGA (1280×800) resolution, meaning sub-Full HD visuals are the best it can muster. Thankfully, it’s a wonderfully bright screen with next to zero issues when viewed in well-lit outdoor environments (boasting a maximum brightness that approaches 500nits). Despite this, there’s no HDR functionality. 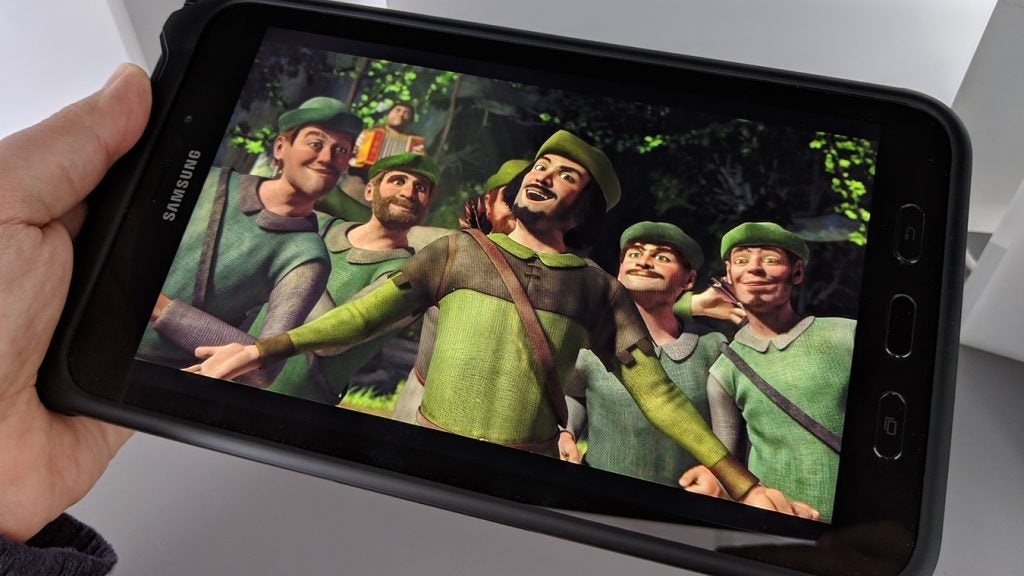 Samsung’s preference for AMOLED panels is another plus, with great contrast and punchy colours too, provided you’re not looking for accuracy from the viewing experience.

Like the tablet itself, the S Pen is water resistant (something Samsung first implemented with the ill-fated Galaxy Note 7) and like the stylus experience on other recent S Pen-capable Samsung slates, it supports up to 4096 levels of pressure sensitivity. 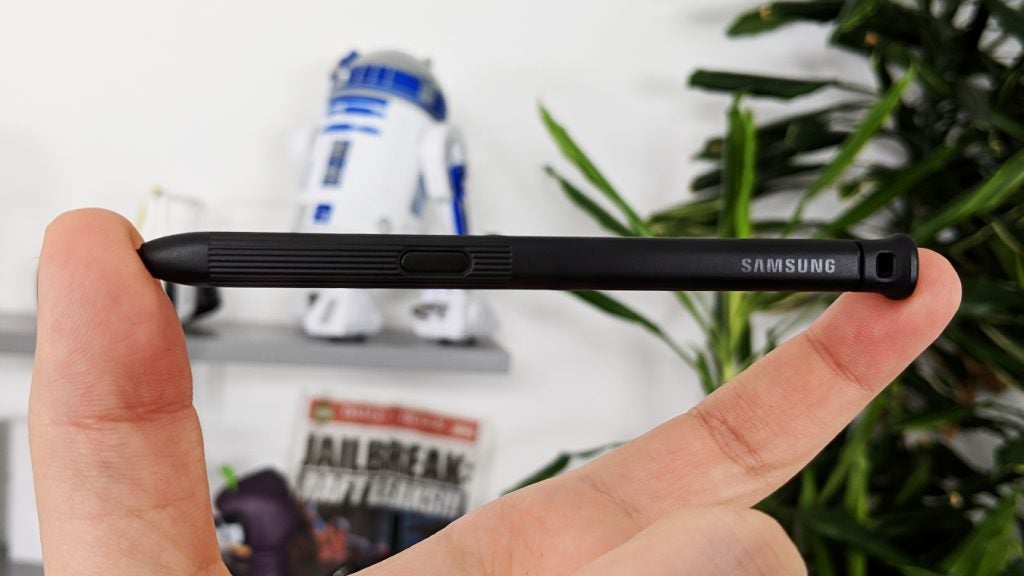 The stylus offers a pleasing level of drag and resistance across the Active 2’s screen, with a hard 0.7mm nib. However, it doesn’t offer a particularly deep drawing experience, with no tilt detection or the option to shade at an extreme angle, as with the Apple Pencil.

Instead, the power of the stylus is best unlocked by robust third-party illustration apps or as a tool for annotating screenshots or accepting handwriting in place of Samsung’s native software keyboard.

Samsung’s own Exynos 7870 processor offers decidedly disappointing performance, offering functional day-to-day usage that’s all too easy to bog down after enough app jumping or when diving into more intensive tasks like gaming.

It’s perfectly happy streaming from the likes of YouTube and Netflix, while most tasks, such as web browsing, navigation and email, won’t prove all that troublesome either. However, the somewhat underwhelming 3GB of RAM is also a likely contributor to any lag that does crop up after a while. 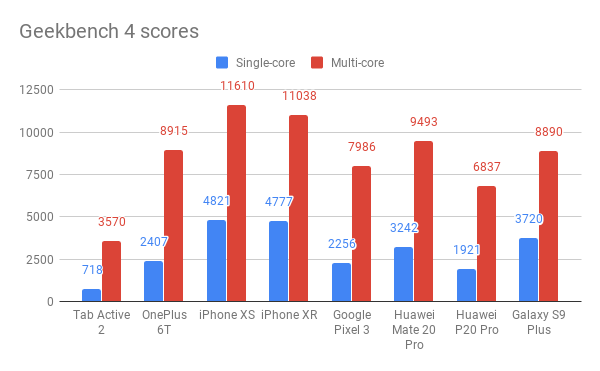 Benchmarking scores proved disappointing across the board

The in-built Device Maintenance app goes some way to tidying up rogue background processes and other elements that might negatively affect the Active 2’s performance but overall it seems as though the tablet just isn’t equipped to deal with anything more demanding than the standard tablet fare. 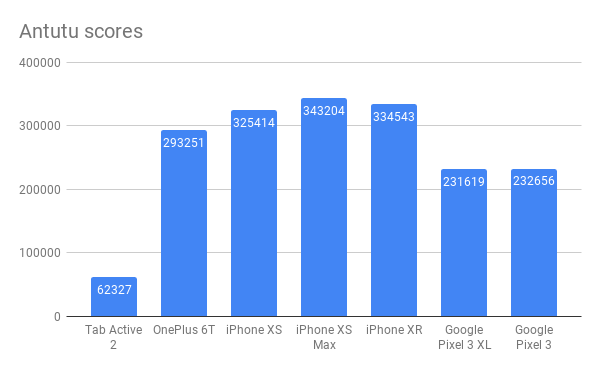 There’s also the matter of the tablet’s biometric security, which takes the form of both face and fingerprint authentication. Unlike the recently launched Samsung Galaxy Tab S4, the face unlock system housed within the Tab Active 2 is a much simpler affair. There’s no iris recognition at play, with the Active 2 instead solely relying on the front-facing 5-megapixel RGB camera, meaning low-light face unlock can prove tricky. 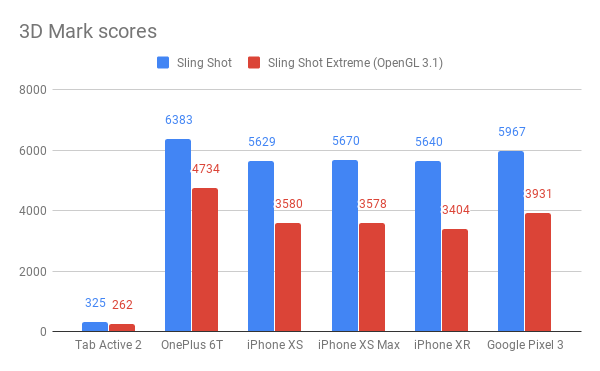 The more reliable option is the fingerprint sensor built into the physical home button, which is both faster and is unaffected by ambient light.

Launching on Android 7.1.1 and more recently upgraded to Android 8.1 Oreo, the Active 2 also lags behind on the software side too, at least on paper.

Thankfully, as with its smartphones, the company’s Samsung Experience 9.5 overlay sidesteps most of the user-side shortcomings that running an older version of Android would present. 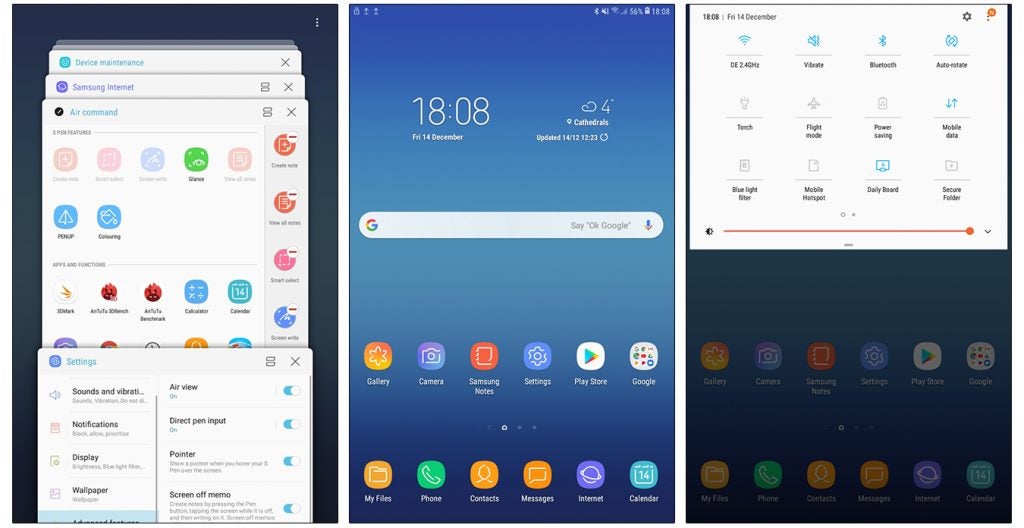 It deviates from stock Android by some margin but shouldn’t prove all that difficult to get to grips with. It’s designed to allow the easy location of the apps you may be hunting for and there’s a level of light customisation to behaviours and aesthetics if you so want.

Native split-screen multitasking is appreciated on the Active 2’s relatively large screen too, even if the likelihood of performance issues creeps up when using the feature. 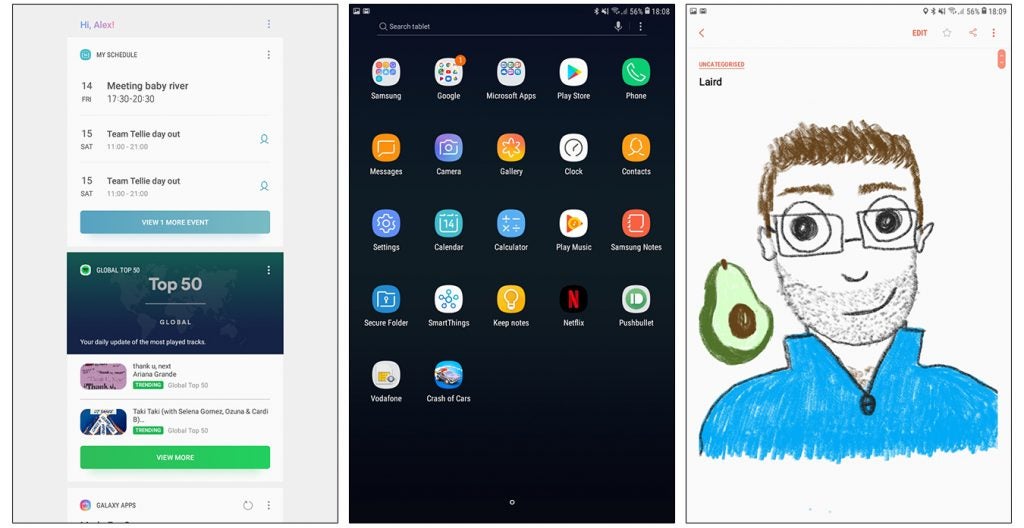 There are also some tablet and stylus-specific inclusions that are well implemented. Daily Board can be toggled from the quick settings menu and throws up photos, weather and calendar information onto the Tab Active 2’s screen whenever it’s charging and idle.

S Pen users, meanwhile, will appreciate Air Command, which is activated when the nib of the S Pen is held just above the surface of the screen. It acts as an ever-present toolbox that lets you jump to one of a number of forms of writing or note-taking, and what’s more, it allows for additional shortcuts too. 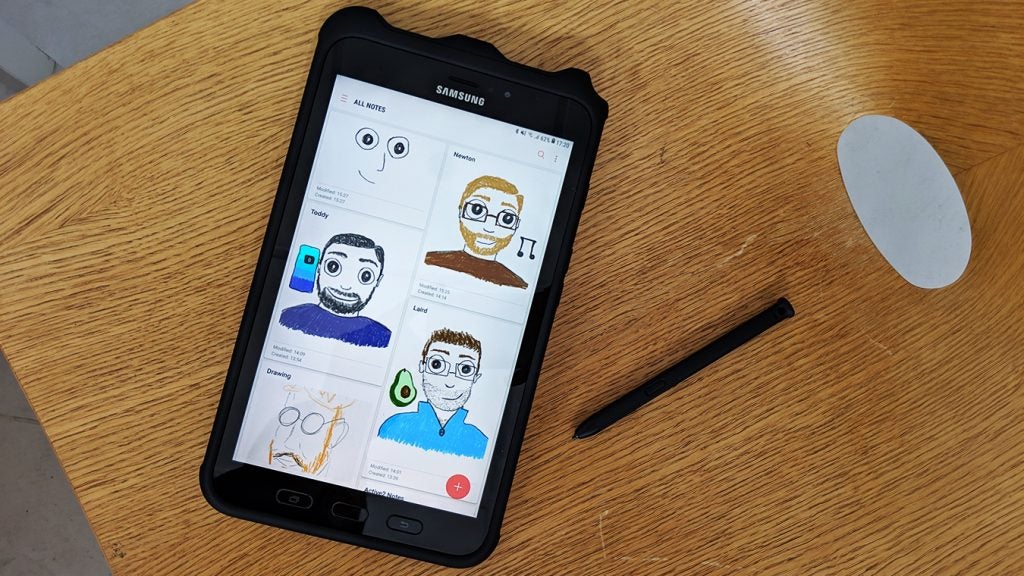 One of the biggest strengths of almost any S Pen-driven device is the inclusion of Off-screen Memo. It grants tablets like the Active 2 the immediacy of physical pen and paper, letting you jot down a quick monochromatic note or doodle without having to fully wake the slate up. Once done, your scrawls are then automatically saved to the Samsung Notes apps.

The 4450mAh battery may sound a touch on the small side for a tablet but with the low demands of the processor and display, longevity isn’t all that bad.

Expect two to three days of general use on a single charge (the battery is rated for 45 hours of mixed usage), with a recharge by way of the in-box 10W charger replenishing power in just over 2.5 hours. 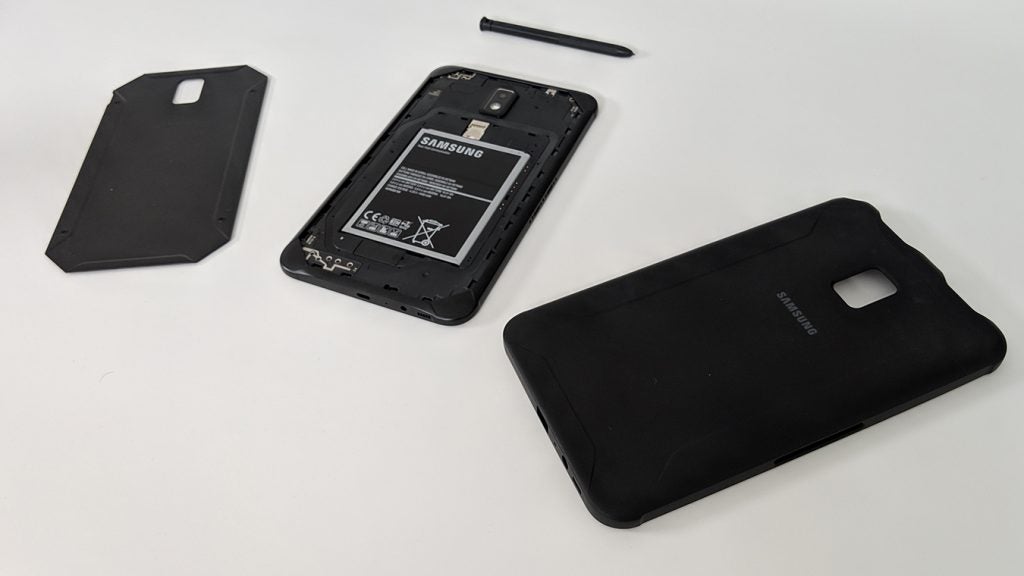 The big hook of the Active 2’s battery is the fact that it’s removable. If you’re planning on taking one of these tablets with you on a multi-day trip where you’re likely to be away from any form of power source for the duration, you can quite quickly prise the Tab open to swap the cell out without too much trouble. This is also how you get at the SIM tray and microSD expansion slot.

The trouble with this functionality is that Samsung doesn’t appear to sell standalone replacement batteries for the Tab Active 2, pushing you to look for less official sources. eBay seems to be the most viable supply option (at the time of writing), with prices for new batteries ranging between £20 and £30 each.

LTE usage drains power about a third faster than browsing and streaming over Wi-Fi, so be aware that overall longevity will work out closer to one or two days if you only plan on using this tablet when on a cellular network.

If you’re looking for a connected tablet that’s tough enough to endure extended periods in the great outdoors, there’s little else out there as well equipped as the Samsung Galaxy Tab Active 2. 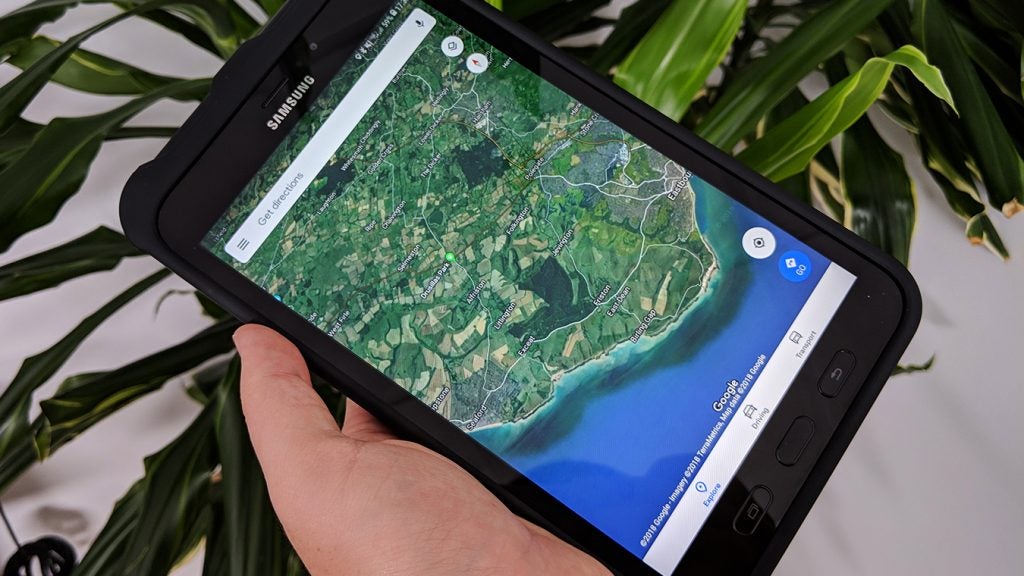 Its ruggedised customisations are unquestionably more than cosmetic and the added S Pen functionality make it a great tool for both adventures, creatives and as an educational tool.

Its ageing hardware, limited internal storage, underwhelming cameras and high price tag, however, mean that it just isn’t going to suit most people’s needs, especially if they’re simply looking for a highly portable tablet. For that, Samsung, Huawei, Amazon and Apple all have other more capable and affordable offerings worth considering.

Older hardware and a high price tag make this a tricky buy for those who aren’t set on using it in the great outdoors.