The Galaxy Tab A7 is a great tablet for anyone on a budget. While it doesn’t boast the most recent specs, it is an easy recommendation for anyone wanting to watch media and browse the web without hurting their wallet.

The Samsung Galaxy Tab A7 is no longer the most recent Tab in the firm’s portfolio, with that title going to the Galaxy Tab A8 range. However, despite its older age, the Galaxy Tab A7 is still a great budget tablet and will breeze through basic tasks like web browsing and video content based on our latest testing.

I have been using the Galaxy Tab A7 for a few weeks now, and it’s been my go-to device for binging Netflix or checking my email. While it’s not the fastest device around, it can handle basic productivity tasks without issue and is small and slender enough to be thrown into a backpack for those daily commutes.

Keep reading to find out how I got on with the Samsung Galaxy Tab A7.

The Galaxy Tab A7 has a sleek and simple design. My unit is White, though it also comes in Dark Grey and Gold. The back of my unit has a silver metal finish while the front is white and glass, which I thought looked sleek and attractive.

I never experienced the chassis flexing or changing shape whilst I was using it and despite the tablet only weighing 476g. All in all, it felt remarkably sturdy and durable. The front panel has a thick symmetrical bezel along all the sides, which I do think reduces the attraction of the device but it does make it easier to hold during use.

The screen measures 10.4-inches and has a resolution of 2000 x 1200, which works well for any Netflix binging sessions. I used the Tab A7 predominantly as a media device, using services like YouTube, Netflix and Disney Plus.

The display doesn’t have the same punch as some OLED tablets, like the Samsung Galaxy Tab S8 Ultra, but it is still perfectly serviceable, with shows like Rick and Morty and Our Planet looking colourful.

While I would not recommend it to anyone looking for the highest quality screen out there, I liked using it for quick YouTube sessions and never had an issue with the display looking overtly dark or unsaturated.

There are two ports on this tablet: a USB-C charger and a 3.5mm audio jack, both of which are located on the bottom of the device. There is a front camera nestled into the bezel on the longest side of the device and a rear camera in the top right-hand corner. There are also volume and power buttons on the right side of the tablet.

The Tab A7 has an 8MP rear camera and a 5MP camera on the front for selfies. The main camera got more use from me, and I found that the pictures it captured were middling, with the camera really struggling in any environment that wasn’t very brightly lit.

Despite taking this picture directly next to a floor-length window, you can see that the top-left corner is quite dark and grainy, with the camera only picking up the highlights and green of the plant on the lighter side. Overall the picture lacks a lot of finer detail and the colours seem a lot more washed out than in real life.

The camera does better out in daylight, though there is still a lack of colour and detail, especially compared to pictures that you can capture with most mobile phones.

While I wouldn’t recommend using the camera to capture striking and interesting shots, it worked well for me when I needed to scan documents or take quick snaps of important information.

In the same vein, the front camera appears washed out and grainy and I wouldn’t use it to capture any Instagram-worthy selfies. However, it does work fine if you need it to join any video calls, as long as you’re not too bothered about your picture looking sharp and detailed.

The Tab A7 is not the fastest tablet around, and it comes with a mid-range processor, the Qualcomm Snapdragon 662. Again, since this tablet was released in 2020, it’s not going to feature the latest Qualcomm Snapdragon 8 Gen 1 chipset; anyone looking for a more powerful device should look at the iPad Air 2022 or Xiaomi Pad 5.

However, older specs aside, I had no issue using the Tab A7 and I didn’t feel like its mid-range processor held it back massively. My only bugbear was that sometimes the latency was poor, meaning I would be waiting a couple of seconds for an app to load or for my password to register, but it didn’t happen too consistently to become an issue.

To check what this tablet is truly capable of, we ran some industry-standard tests to see how it compares to other devices. After running Geekbench 5, the single-core score came out at 245, while the multi-core score sat at 1,221. These are pretty underwhelming scores, with the table below showing the vast difference between the Tab A7 and high-end machines like an iPad.

Despite these scores, I still that the Galaxy Tab A7 runs perfectly well for basic productivity tasks, and I wouldn’t advise anyone to completely write off this tablet. I would recommend upgrading to a more premium tablet if you’re looking in engage in more demanding tasks – such as creating art, video editing or triple-A gaming – but the Tab A7 will fare fine for YouTube videos and checking emails.

It also runs on Android 11, which again is not the most recent OS since Android 12 came out (and since Android 13 was announced). During my testing, I never had any issues with the OS and I don’t think the experience of using the tablet would have been massively improved by Android 12. Plus, it’s very likely that will be updated since the tablet was originally launched with Android 10, and Samsung’s own update policy seems to suggest that the Tab A7 is in line for an update since it will get three years of major OS support.

The Galaxy Tab A7 comes with 3GB RAM and 32GB storage, though that can be configured to up to 1TB if you use a microSD. Since I’ve been using the Tab A7 quite casually, I don’t feel like I need any more storage than 32GB, but I was happy to know that I could expand that if I wanted to transfer my photo or song library over.

The A7 features a 7040mAh battery and has support for 15W adaptive fast charging, however, there is no support for wireless charging. During my testing I found the battery to be decent and to last multiple days without needing to be charged.

I was able to last the day with this tablet when it was used as my main media device and multiple days with less intensive use. The main issue here is that charging takes a very long time, with the tablet needing just over four hours on charge to reach 100% from 0%.

I did notice that using my Dell XPS 13 OLED (2020) laptop charger produced much faster results than the standard brick included in the box, so I would recommend using a more powerful USB-C charger if you have one on hand.

From my experience, anyone wanting a tablet to watch media and browse the web occasionally shouldn’t have too many issues with the battery, but I would recommend a tablet with a better charging time, like the Samsung Galaxy Tab S7 Plus.

You want a cheap tablet for watching media
The Tab A7 is an affordable tablet that can be used to watch Netflix or YouTube. The screen is bright and the battery should last a few days.

You want a high-end tablet
If you want to game or use your tablet for more intensive work than watching media, I would recommend looking at higher-end Samsung devices or at brands like Apple.

The Samsung Galaxy Tab A7 is a solid choice for anyone after an affordable tablet to watch media on, with a bright and sizeable screen. The interface is simple to use and there is a lot of app support.

However, anyone looking to engage in creative work should look elsewhere, as there is no S-Pen support and the latency is not fantastic. The middling processor also doesn’t offer much in terms of speed, so anyone hoping to play competitive games should also look elsewhere.

For the low price and build quality though, I wouldn’t completely write off this tablet, and would easily recommend it to anyone on a budget that wants a larger device to watch YouYube on.

We test every tablet we review thoroughly. We use industry-standard tests to compare features properly and we use the tablet as our main device over the review period. We’ll always tell you what we find and we never, ever, accept money to review a product.

Tested for two weeks before review 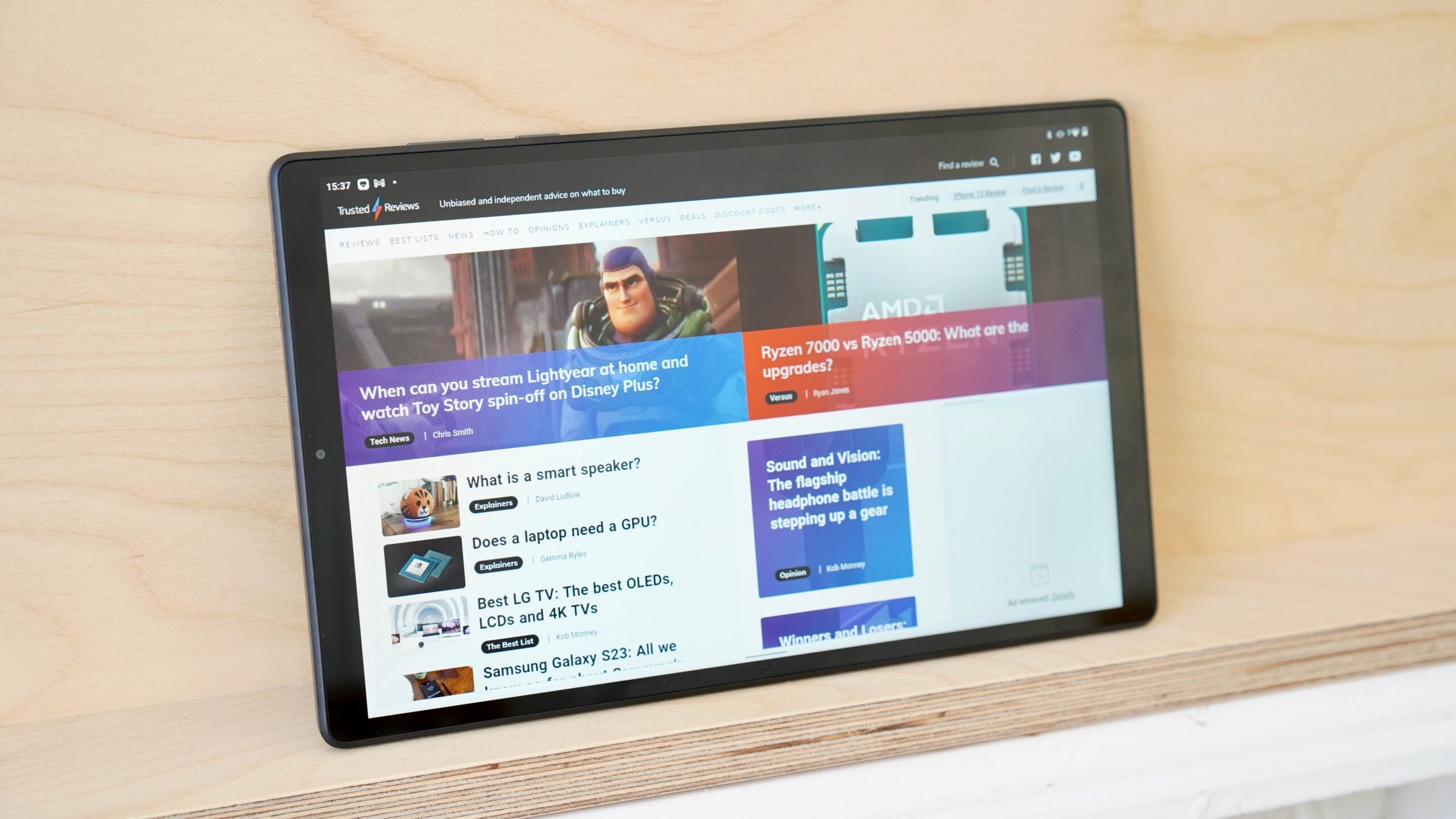 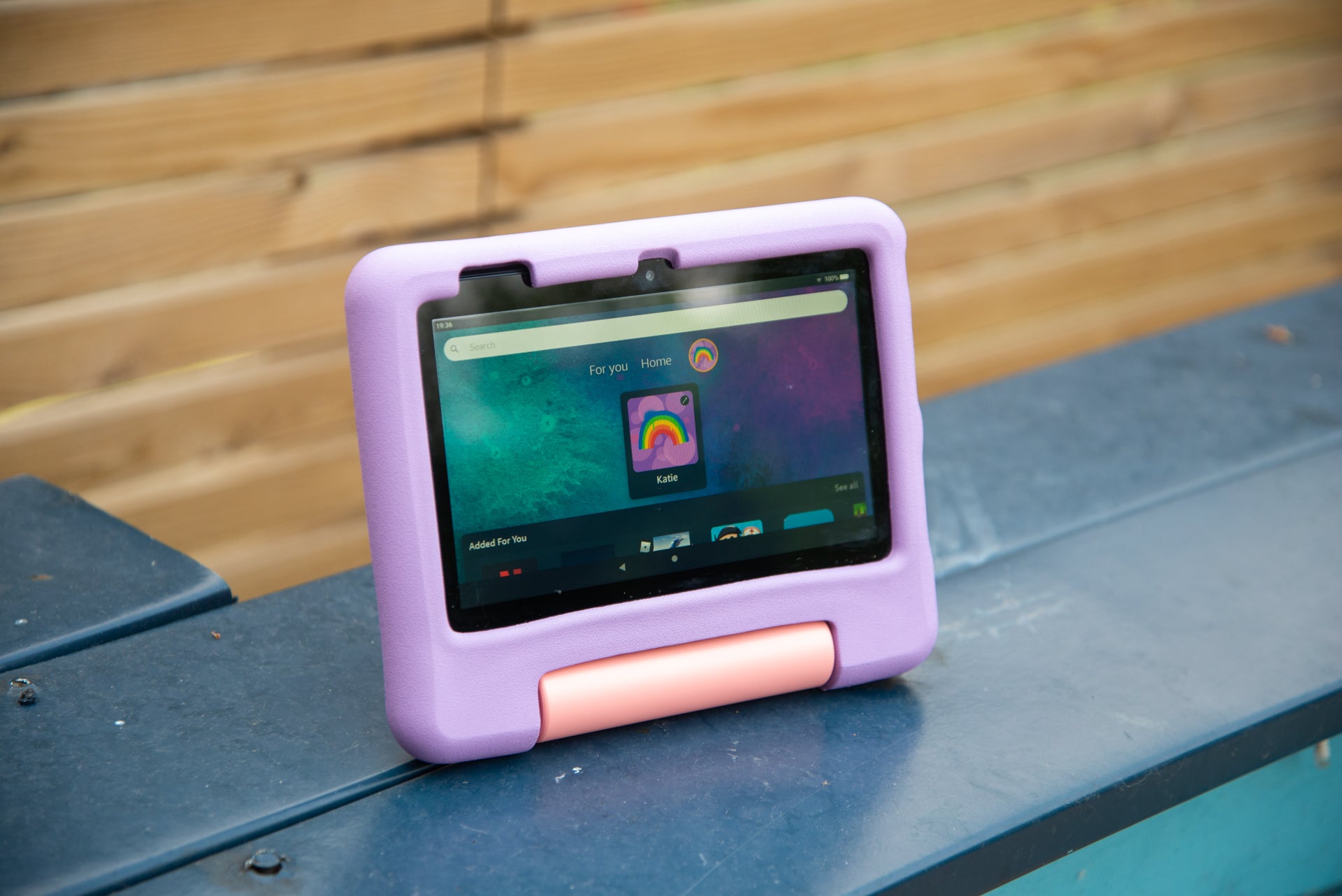 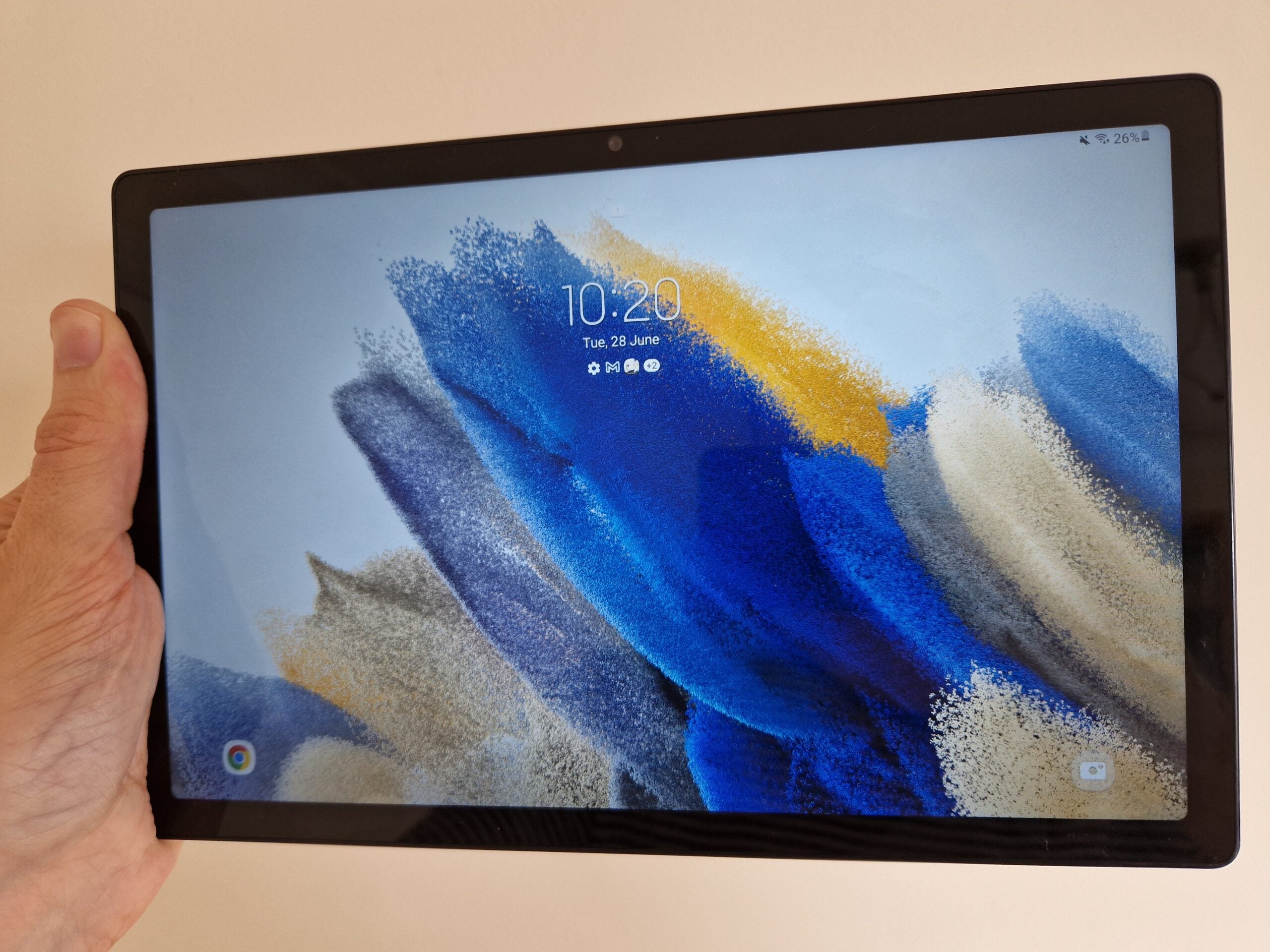 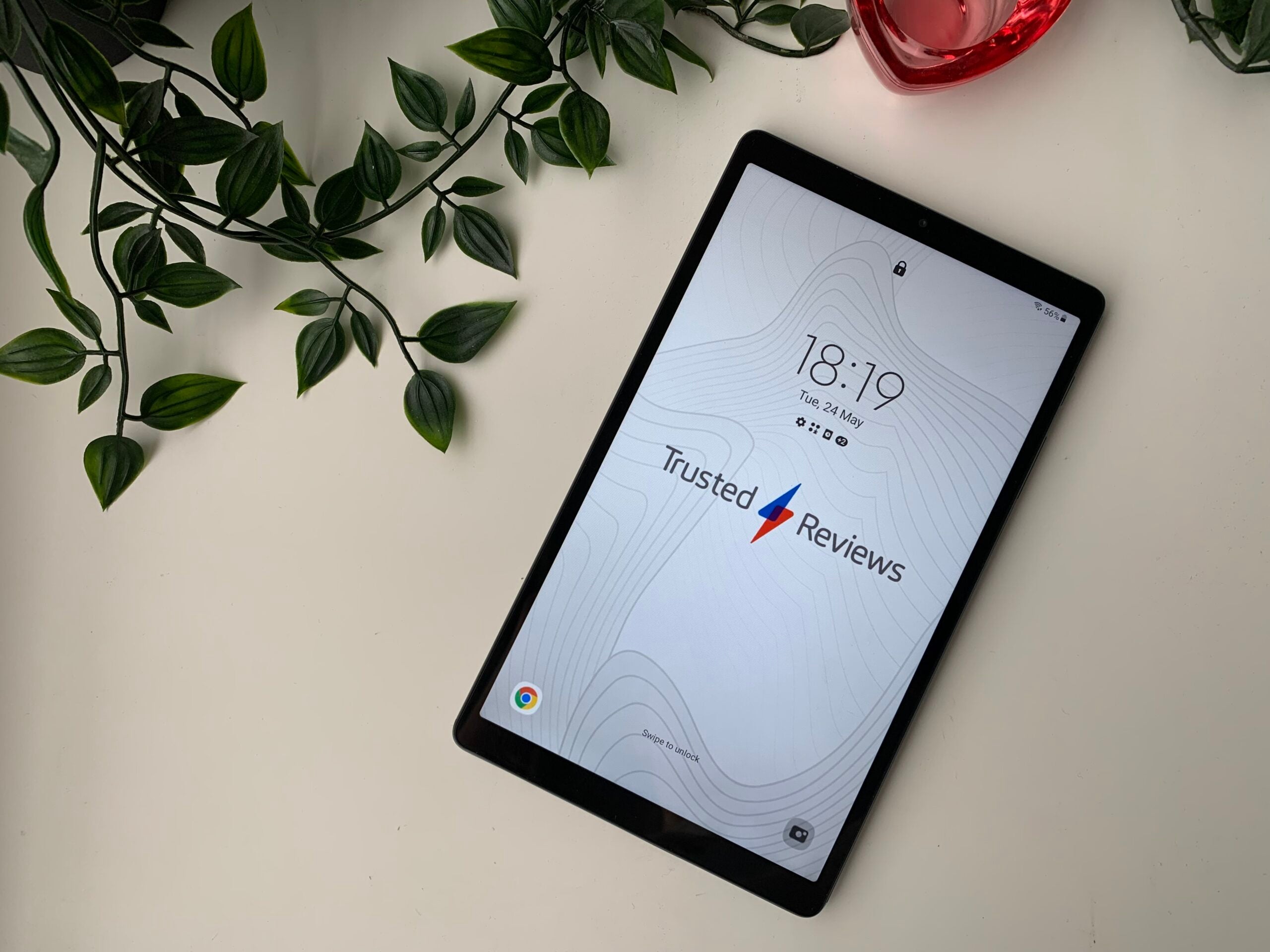 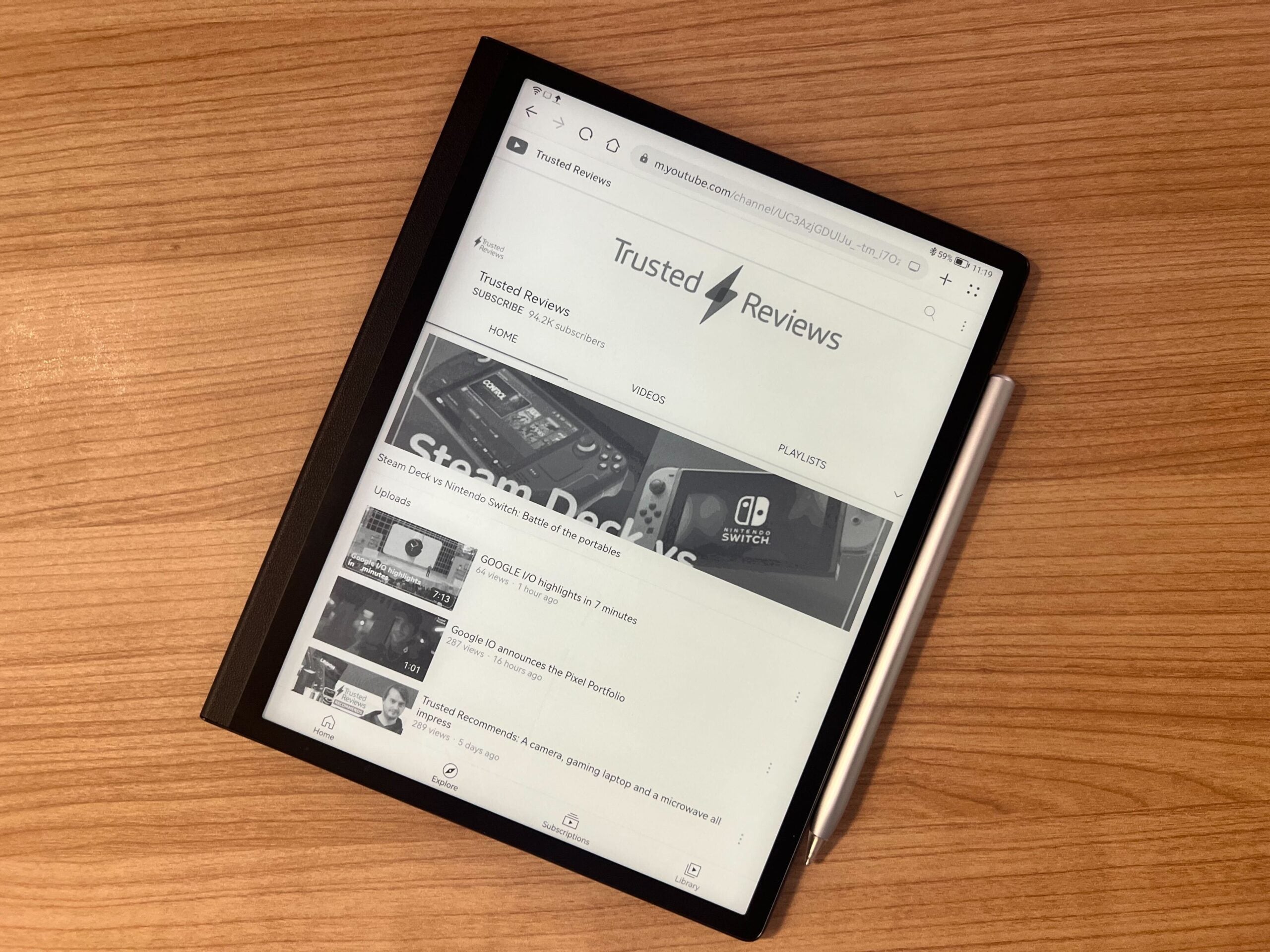 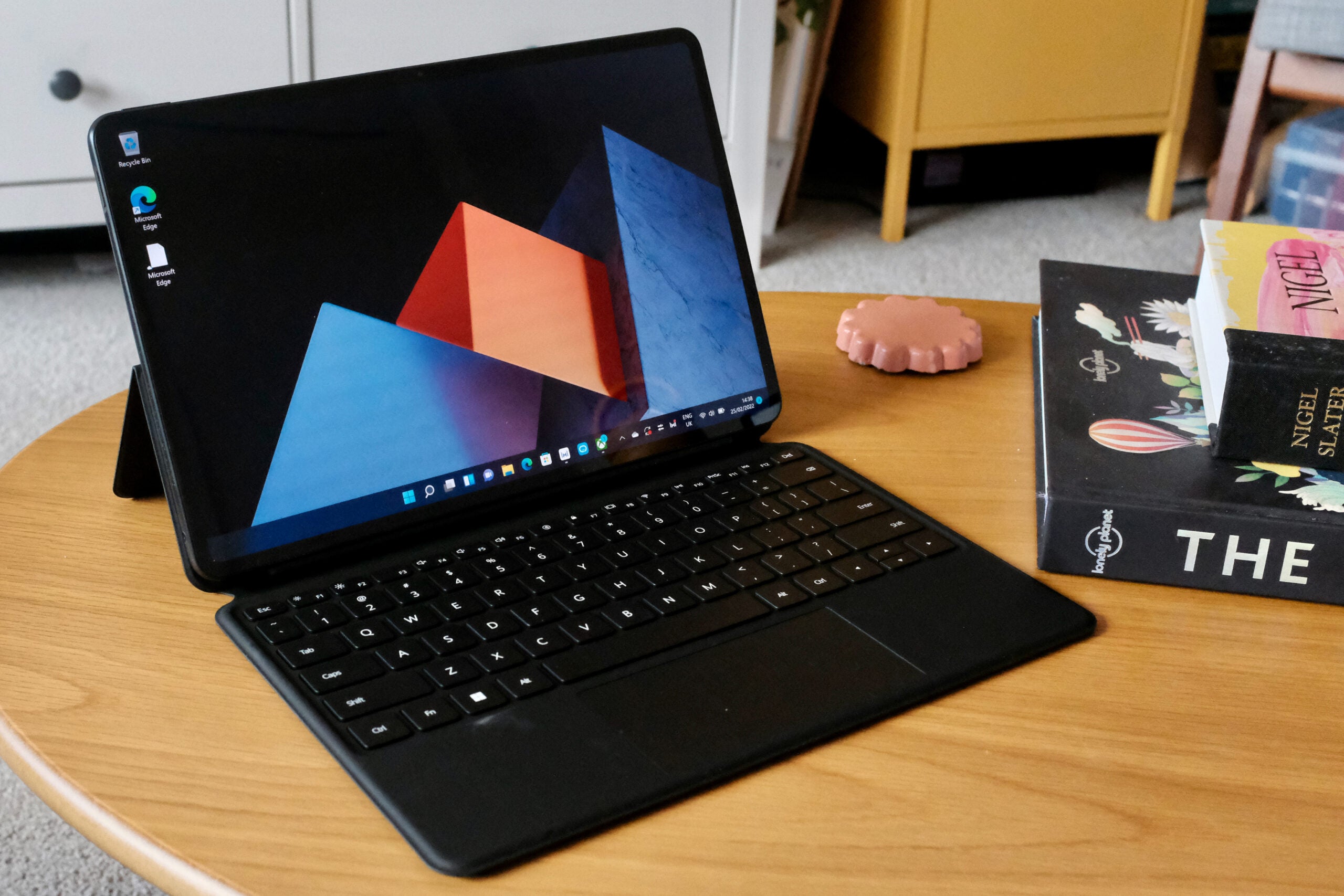 Does the Galaxy Tab A7 run on Android 12?

No, the tablet runs on Android 11, however, it is very likely that it will be upgraded to Android 12 at some point since the tablet originally launched with Android 10 and Samsung’s plan for the device shows that it is eligible for three more years of major OS updates.

You can see all the test data we collected reviewing the A7 in the table below.

You can see the A7’s full specs sheet, and how they compare to its main rivals, in the table below.