The Samsung Galaxy Tab A is a real alternative to an iPad, with a sharp and colourful screen and a design very close to that of £400 tablets. All in all, it's the best budget Android tablet around if you don't like the restrictive approach of the Amazon Fire HD 10.

The Samsung Galaxy Tab A is the most important tablet Samsung has released in ages for deal-hunting buyers. It’s far cheaper than the cheapest iPad, unlike the great Galaxy Tab S5e, but it still has a sharp screen.

After what feels like years of shelves filled with pixellated “HD Ready” budget tablets, there’s finally something to recommend instead of the Amazon Fire HD 10.

But is the Samsung Galaxy Tab A better? It has a smaller footprint, metal rear, better cameras and, most important of all, full access to Google Play and the Google app suite. The Fire HD 10 doesn’t have that.

Power is the only major problem here. The Samsung Galaxy Tab A’s graphics chipset is fairly weak. As is so often the case, big gaming fans should consider an iPad instead. But at this price it only grazes this bargain tablet’s appeal. 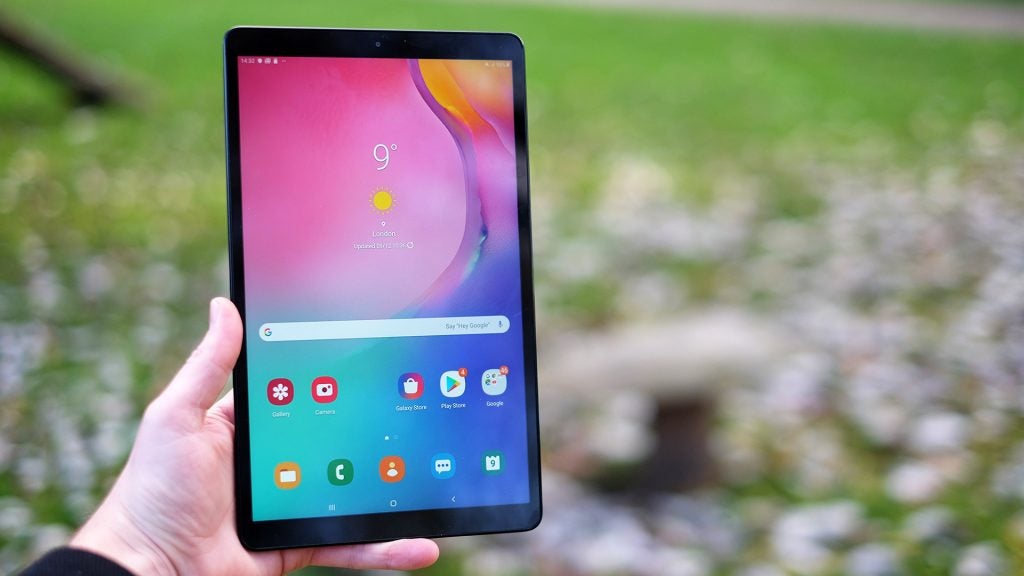 Design – The best-looking tablet you’ll find at the price

The Samsung Galaxy Tab A is the best-looking tablet you’ll find at the price from one of the big names in tech. There are two versions, an 8-incher and this 10.1-inch version.

It has a mostly-aluminium back, for a feel not too dissimilar to an iPad. There’s an inch-deep strip of plastic at the top that cheapens the design a little, but at this price I just don’t care. Plastic is used here to aid the wireless antennas’ transmission, and it almost certainly makes the Samsung Galaxy Tab A significantly cheaper to produce.

Fancy phones and tablets use little 2mm strips of plastic to do the same job. 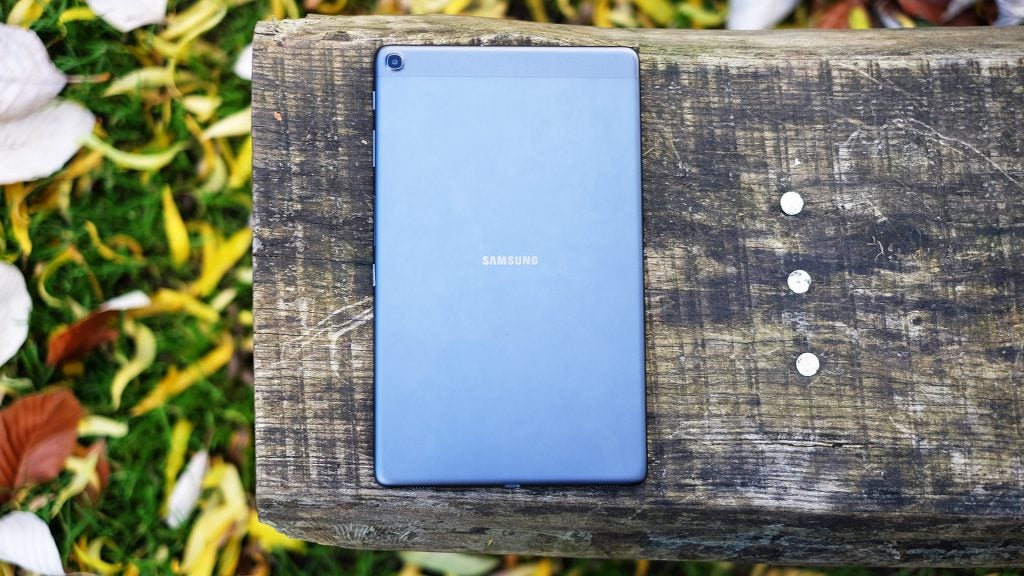 At a glance, the rear of the Tab A is not too dissimilar to that of an iPad

Samsung has also brought the design into the present by trimming down the screen borders significantly since the last version of this tablet, released in 2016. The borders are even thinner than a 10.2-inch iPad 7’s, and its footprint smaller. When the thickness is also a super-slim 7.5mm, the Samsung Galaxy Tab A’s design is real 5-star stuff for a budget tablet. 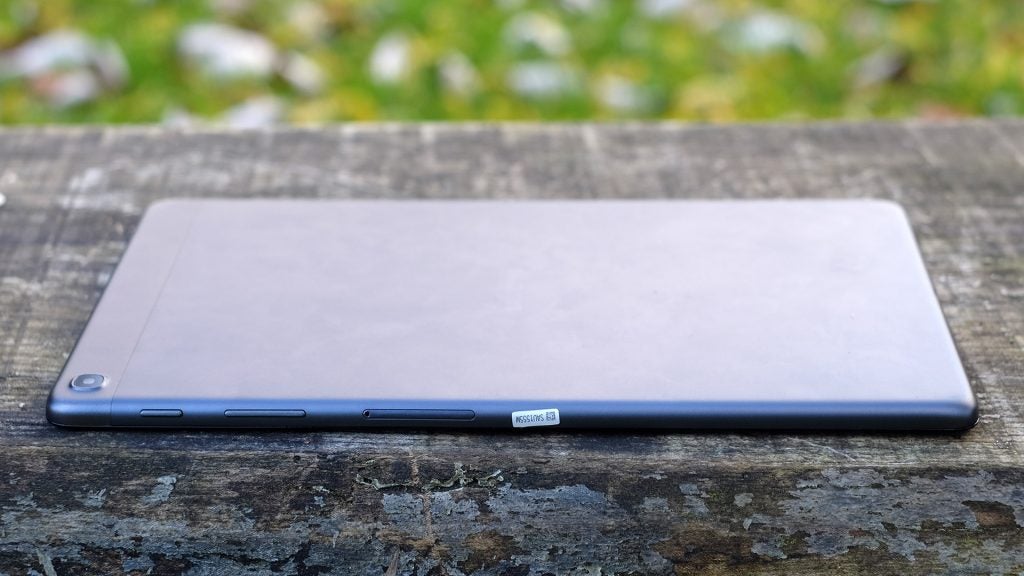 For a budget tablet, the Tab A is super-slim – measuring in at just 7.5mm

All the right choices have been made here, and I have not missed some of the obvious missing parts. There’s no fingerprint scanner, which is no huge loss in a tablet. Some may disagree. There is no water resistance either, as expected.

Storage and speaker quality are the parts that do feel the price squeeze a little more keenly. You get 32GB storage, so may well want to buy a microSD card. There’s space for one in the Samsung Galaxy Tab A, sadly you don’t seem to be able to integrate it with system storage.

Its speakers aren’t close to the brilliant stereo set of the Tab S5e’s either. You get a pair, arranged on the bottom. They have reasonable bulk for such a cheap tablet, but you don’t get that all-important stereo effect when holding the Samsung Galaxy Tab A out in front of you to watch a film or YouTube video. 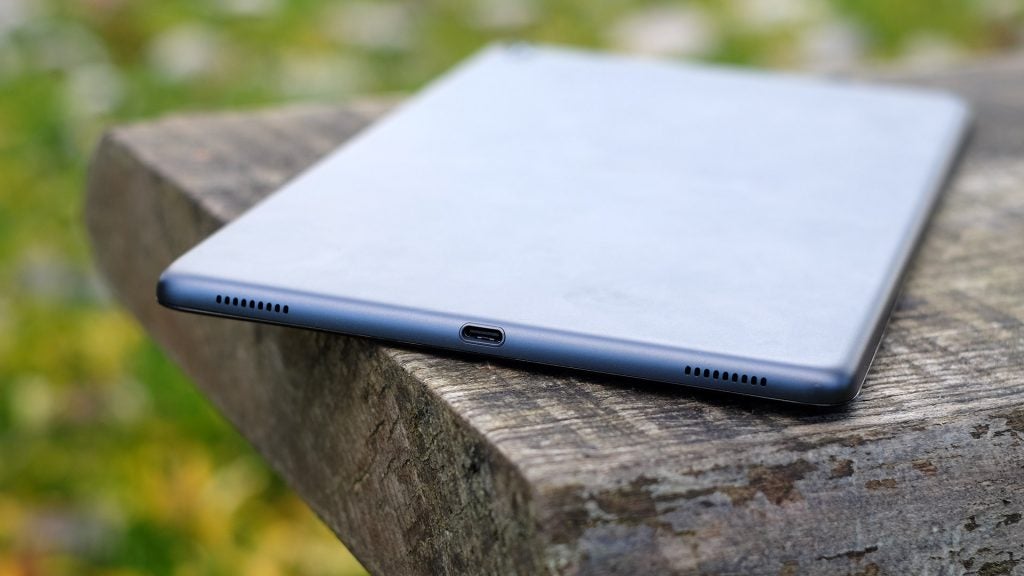 Audio quality from the two speakers is just ok, but lacks an stereo effect

Screen – An excellent screen for the price

Size aside, display tech is the big difference between this tablet and the higher-end Samsungs. You get LCD here, not the OLED style of which Samsung is so fond. This kind of screen has a backlight, which means the black parts of an image won’t look perfectly dark if you watch a movie in a darker room. The consistency of the brightness isn’t at the level of a very high-end LCD screen either. However, most will only notice this on an all-white or all-black screen. 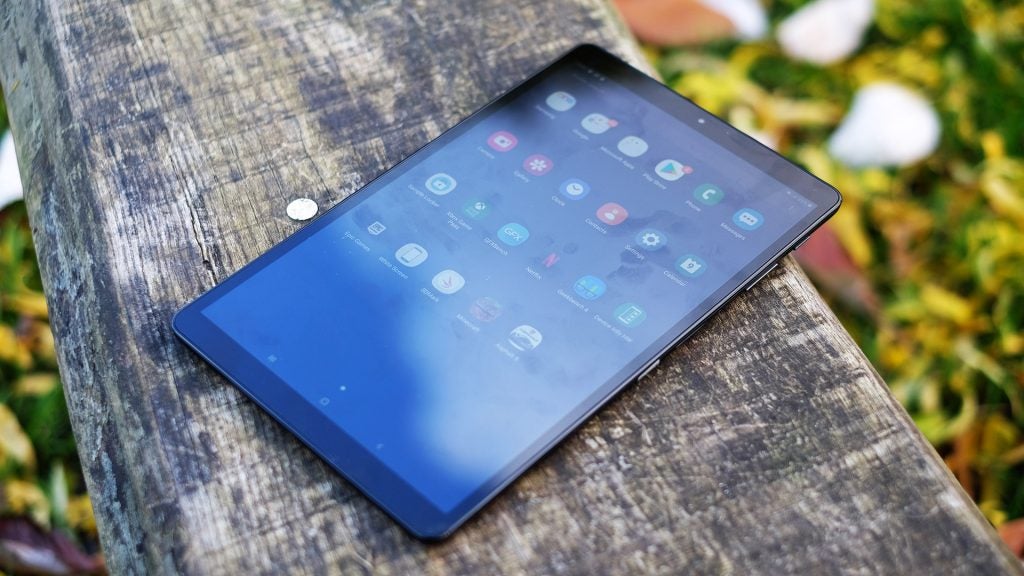 It might not be OLED, but it’s a great screen for the price

The Samsung Galaxy Tab A still has an excellent screen at the price, though. It’s sharp, plenty bright enough for indoors use and colour is not obviously weak or undersaturated.

Much like the plastic part on the back, you can point out issues with this screen. But, again, for the price it is hard to fault. It also beats the Amazon Fire HD 10 in one respect. Smaller borders mean you get more screen inches per square inch of tablet. The two displays are otherwise pretty similar, though.

Software is where we see the most important difference between the Samsung Galaxy Tab and Amazon Fire HD 10, its star rival. Both are based on Android, but here you get the same interface used in Samsung phones, not the more restrictive ground-up reworking of Android Amazon uses.

Google apps are the biggest difference, and Google Play the most important. It gives the Samsung Galaxy Tab A access to just about every app and game on Android, compatibility exceptions aside. The array on the Fire’s Amazon Appstore is much more limited. 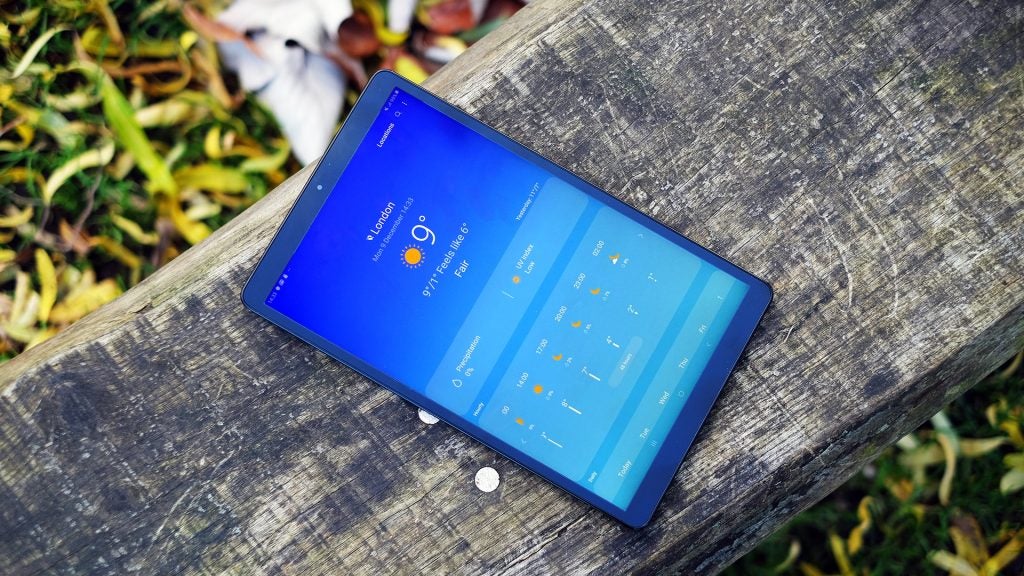 This, more than the fancier design, is perhaps the main reason to buy a Samsung Galaxy Tab A instead of an Amazon tablet.

The software is likely to seem more familiar too, with a layout similar to any number of Android phones and tablets. There are standard home screens and a page-based apps menu. While there are some preinstalled apps, the experience is completely different to Amazon’s, which tries to ram Amazon services down your throat. It gets old if you don’t even subscribe to Prime. 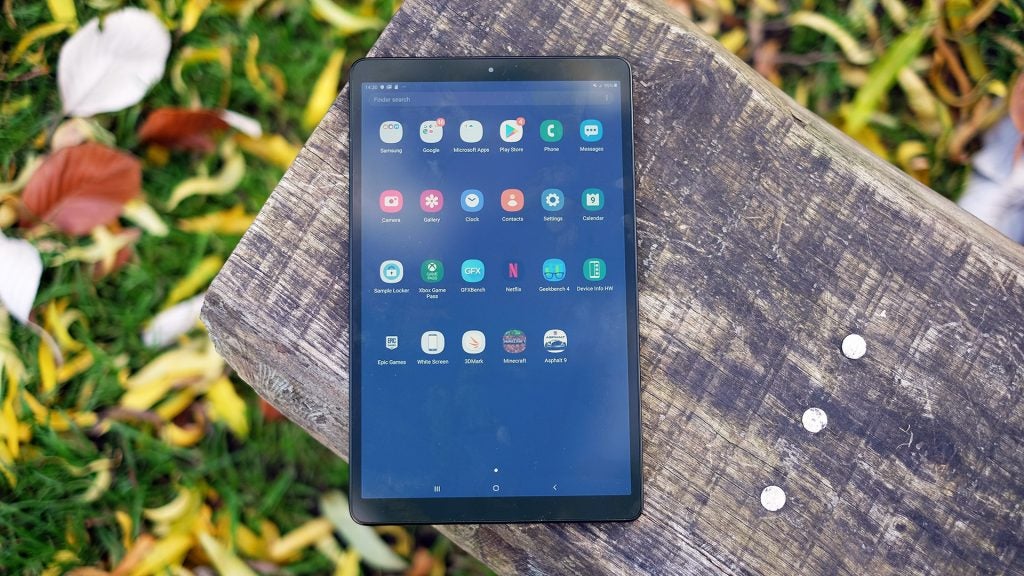 The internals mean it just about gets by, but it’s clear this isn’t a tablet built for pushing hard

The big “but” is the Samsung Galaxy Tab A’s processor. It has an Exynos 7904 CPU with Mali-G71 MP2 GPU and 2GB RAM. This team just scrapes by in every respect. There’s the occasional bit of system lag, apps take a little while to load and you can clearly see the limit of the graphics power when you play some higher-end games.

In casual games you may see some lag when the screen fills with objects. Demanding 3D titles will often only run smoothly if you lower the graphics setting a bit. This usually means lower resolutions, basic textures, worse draw distance, or a mix of these.

Want more context? Minecraft runs just fine unless you increase the draw distance, which reduces the frame rate a little too much for comfort. PUBG runs well at the “Balanced” setting. You can also use “HD”, but there are regular, distracting frame rate dips. You can’t run Fortnite at all. It’s not supported, and likely will never be as 4GB RAM is listed as the minimum spec. Asphalt 9 plays surprisingly well with no alterations to graphics, likely down to Gameloft’s clever scaling of the game to run on just about any hardware. It still looks fab. 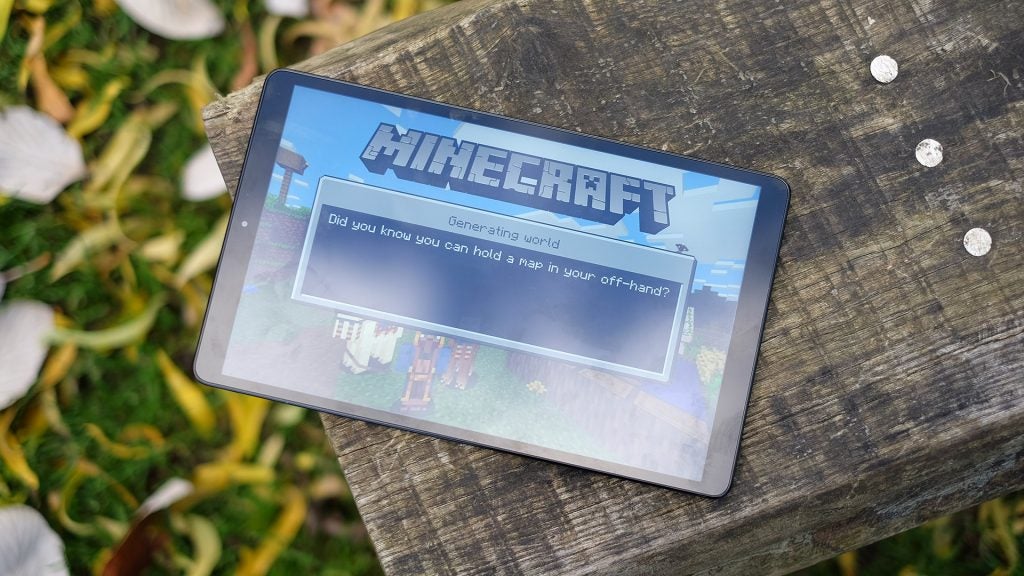 Most games will run fine, including Minecraft

This is not a bad gaming tablet. You can play almost all of Android’s best high-profile games just fine, but those who notice less than smooth frame rates may want to think about spending more. Amazon’s Fire HD 10 has a much more powerful CPU and GPU, but I don’t think it’s the perfect solution as you can’t install anywhere near as many key titles. The more techy among you can try side-loading, but this introduces security issues and often just won’t work.

Given the basic core specs, the Samsung Galaxy Tab A has surprisingly solid cameras for a cheap tablet. There’s a flash-free 8-megapixel camera on the back and a 5-megapixel one up front.

These are far better than the Amazon Fire HD 10’s cameras, and the rear one can take surprisingly solid images. As ever, most of you will be better off using your phone, but better cameras are still a benefit for apps and games that use the cameras. 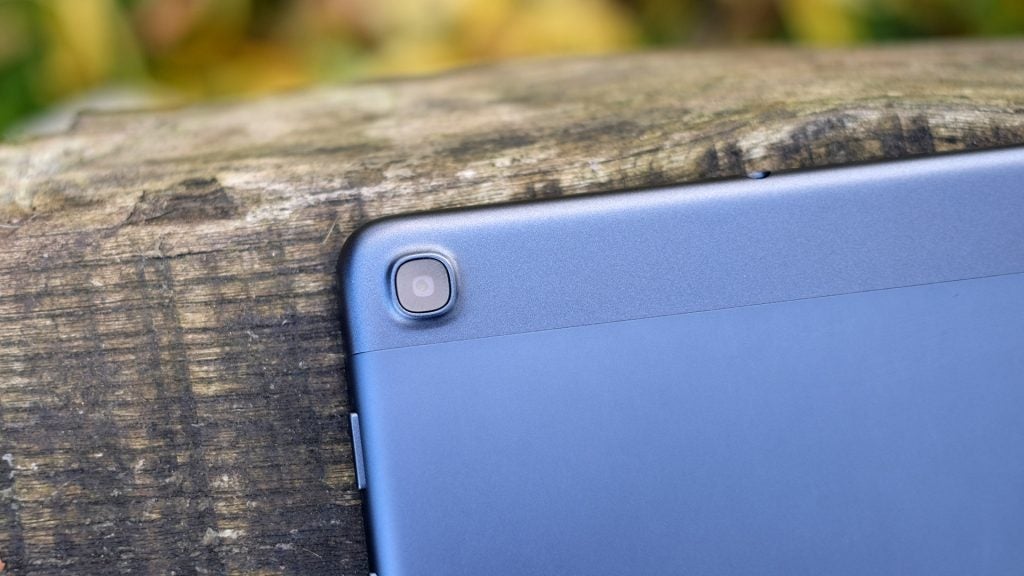 The rear camera has autofocus too, far from a given in a cheap tablet. Autofocus lets you take close-up shots.

Selfies predictably look quite soft in indoors lighting, and aren’t great in any conditions. But both of these cameras are frankly significantly better than I expected. I wouldn’t call them “good”, though, as they are slow to use. The camera app takes a long time to load up and the app feels a little laggy.

I’d trade what meagre skills these cameras have for some more storage or a better GPU in a heartbeat. But I do have to acknowledge that not everyone uses a tablet as I do. I have no need for tablet cameras, others seem to love them. 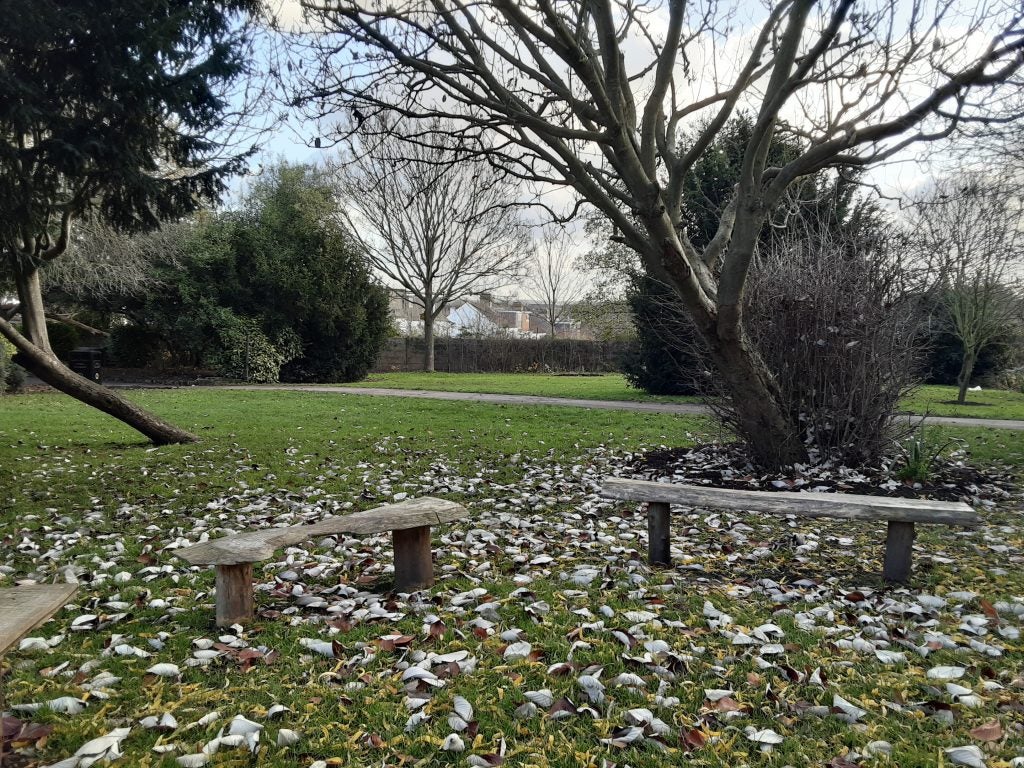 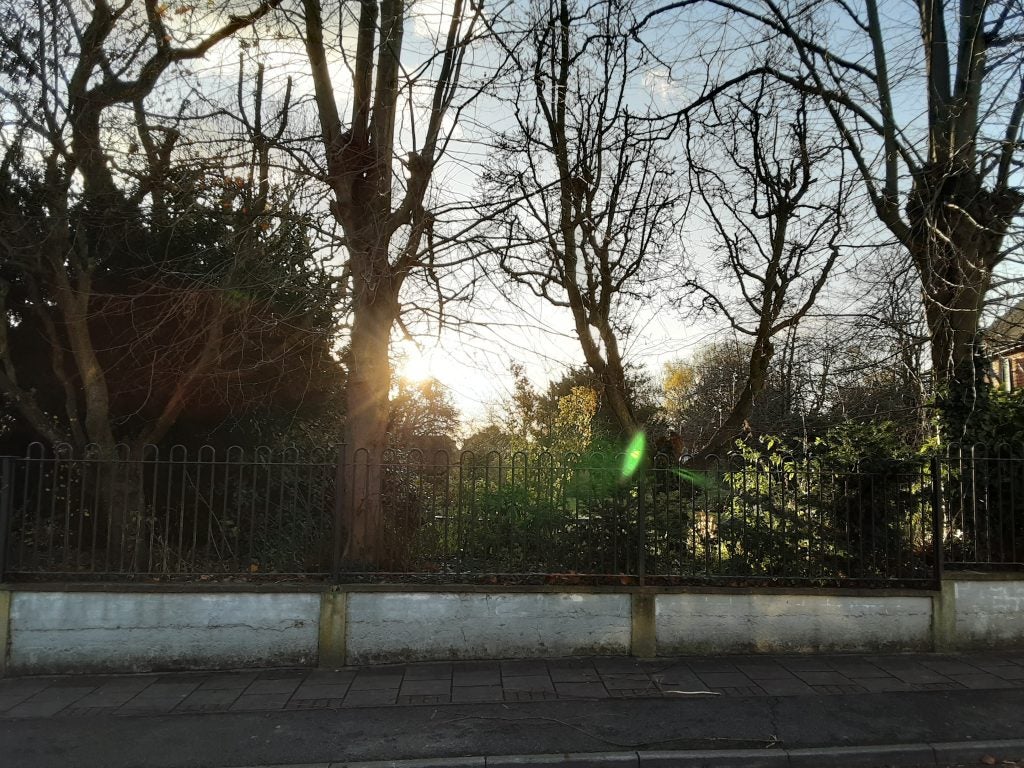 The Samsung Galaxy Tab A can shoot 1080p video with either camera, and the extra fidelity is a good feature if you want a tablet for video chat.

The Samsung Galaxy Tab A has a 6250mAh battery, and uses a USB-C connector to charge. Samsung says the battery will last up to 13 hours, and that claim is fairly close to my experience.

When streaming video from YouTube for three hours, the drop in battery is consistent with battery life of just under 13 hours. We’re well within the golden zone for tablets, and it seems to outlast both my 2018 iPad 9.7 and the Amazon Fire HD 10. There are zero stamina worries here, and it will last for a generous handful of hours of processor-stressing games too. 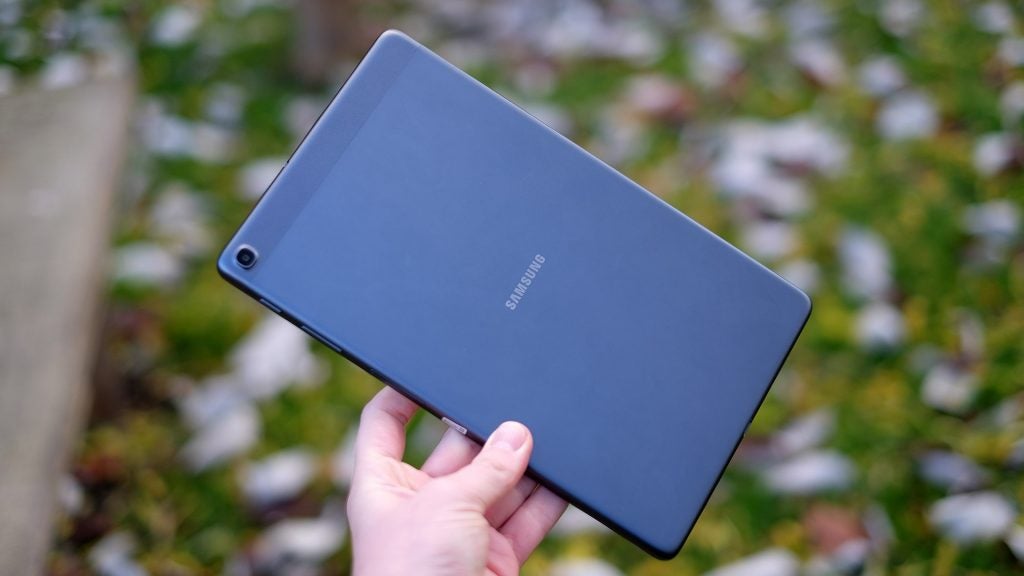 Should you buy the Samsung Galaxy Tab A?

Picky techies are the only people who should be put off the Galaxy Tab A compromises. It doesn’t have the most powerful GPU, the storage is limited and this particular review sample doesn’t have a 100% consistent screen, but it is otherwise a stellar bargain.

Those who are put off by the shortcomings already have another obvious choice to hand, too, the Samsung Galaxy S5e. I’ve been waiting for an up-to-date tablet to go head-to-head with the Amazon Fire range for what feels like forever, and Samsung has finally made it.

The Samsung Galaxy Tab A is a real alternative to an iPad for basics, with a sharp and colourful screen and a design very close to that of £400 tablets. All in all, it’s the best budget Android tablet around if you don’t like the restrictive approach of the Amazon Fire HD 10.