Samsung claims the Galaxy Tab 7.7 is the slimmest and lightest Android tablet going and with official figures of 7.89mm  thick and 335g in weight (nearly half an iPad 2), we have little reason to disbelieve the company. What’s more it really shows when handling the device – it is just effortless to pickup and hold one handed. 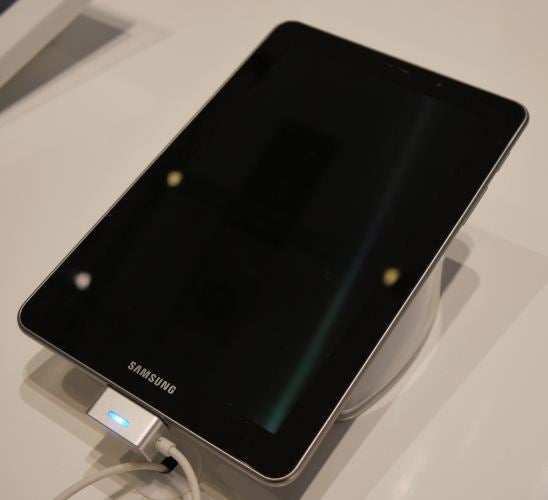 The design is also stunning. We really are bowled over by it. The fundamentals are all very familiar, with an all black front – bar the small Samsung logo – and brushed metal back, but combined with the slimness, and with everything being in the right proportion, it just works so well. The iPad 2 probably still has the crown for outright class thanks to the solid feel of its metal build but it’s a close run thing. 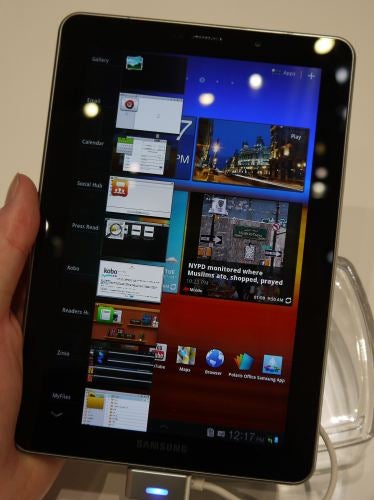 Packed into this slim chassis are a decent if not comprehensive selection of connections. A headphone jack sits on the top edge while a microSD slot is on the left side. However, there’s no HDMI and rather than a normal microUSB Samsung has used the same proprietary port as on the Tab 10.1. The former is a much more understandable decision given the tablet’s size but the latter is agrrevating as it means you always need that cable and that cable only to charge this device. 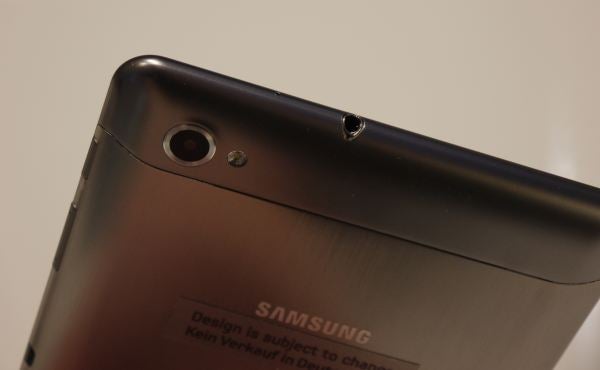 On the right edge there’s the volume and power buttons while the back is home to a camera ”with” an LED flash! We didn’t give it much of a go but no grand claims were made of its abilities by Samsung so we suspect it’s a somewhat token effort. There’s also a webcam on the front.

There are two speakers on the bottom (in portrait) edge. They seemed of reasonable quality but the Samsung booth was so noisy that it was very difficult to really hear.

After the slim and lightness of this tablet, its next best trick is its
screen. Despite being only 7.7in it packs in a whopping 1,024 x 768
pixels making for incredibly sharp images. It’s an OLED panel too so has
superb viewing angles and intense colours. We still have a few
reservations about the color accuracy of OLED panels but when they’re
otherwise this good, we can’t really complain. 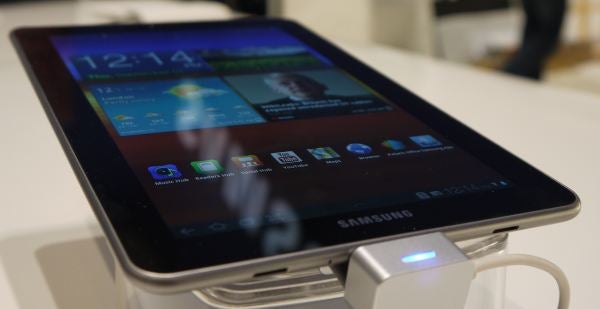 Inside, there’s a 1.4GHz dual core CPU running the show. The tablet felt
reasonably fast but it wasn’t completely lag free, though we suspect
this may have been down to the demo units having lots of things running at once. You also get 64GB of internal
storage, which is plenty to be getting on with, even without adding a
microSD card. 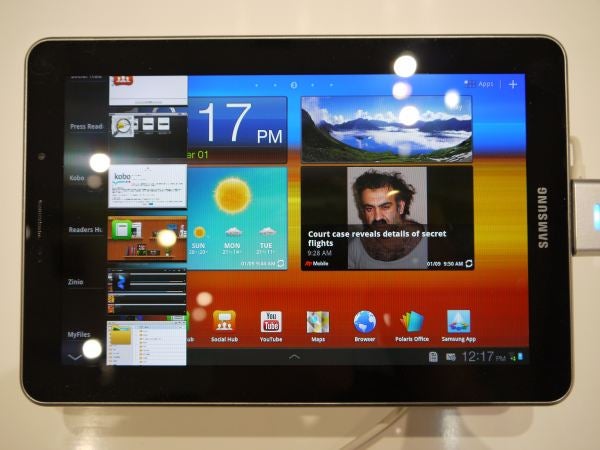 Samsung has given the interface its usual TouchWiz interface tweaks
which include modifying the look of the keyboard and the layout of the
icons on the homescreen, and the addition of some widgets and Samsung
apps. These include the SocialHub for bringing together all your social
networks and the Samsung App store, neither of which were properly setup
so we can’t really make any judgement.

For the most part, though, the interface is typical Android 3.2, with a
great web browser, email client and plenty of apps in the MarketPlace.
If recent Samsung history is anything to go by, the video playback
support will be class beating as well. 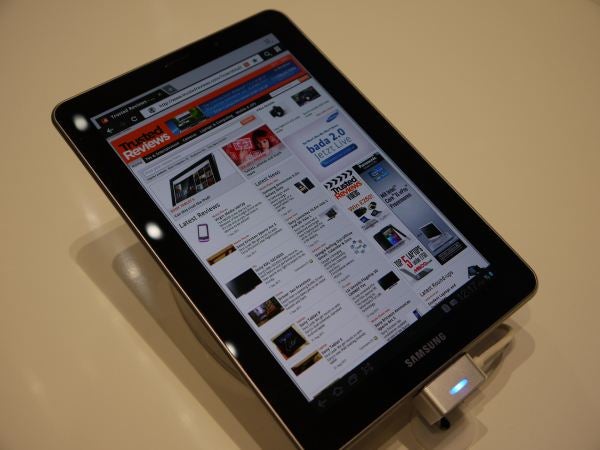 Overall, while the lack of microUSB is a concern and the build isn’t
quite as solid as an iPad, the Samsung Galaxy Tab 7.7in is nevertheless a
seriously impressive tablet. If you’re looking for a smaller
alternative to the 9in and 10in tablet, this looks to be the pick of the
bunch.