Like all of Samsung’s Android devices, the Samsung Galaxy Tab 3 7.0 uses the TouchWiz interface. In some tablets and phones, this can feel like a cluttered UI. But here, where most of the higher-end TouchWiz elements are missing, it works pretty well.

It largely just tweaks how Android looks and feels, providing its own app icons, a few widgets, screen transition animations and a lock screen. One real shame is that it lacks Multi Window, used in higher-end Samsung tablets to let you run two apps on one screen at the same time. 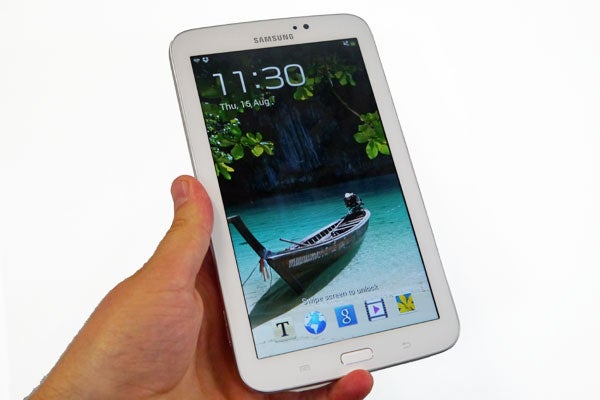 TouchWiz is a jolly-looking, colourful interface rather than a particularly stylish one, and it plays to the idea that the Galaxy Tab 3 7.0 is a teeny bit toy-like. It also feels slightly slower in operation than the vanilla Android OS of the Nexus 7 and the more lightly customised Android used in the Asus MeMO Pad 7 HD.

This may be in part down to the pure use of a custom UI, but we can also blame the version of Android at the Galaxy Tab 3 7.0’s core. While the most up-to-date Android devices use Android 4.3, the Tab 3 7.0 uses the year old Android 4.1.

Aside from the multiple user profiles feature of Android 4.3, you wouldn’t miss most of the ‘headline’ improvements in a tablet like this. But each Android update also brings a bunch of speed improvements and optimisations. There’s only minor lag in the Galaxy Tab 3 7.0, but it is noticeable.

We also noticed a number of glitchy bugs. The sound level of the tablet went out of sync with what the volume indicator appeared to suggest, and occasionally the lock screen would refuse to… be unlocked. We encountered a few freezes, and at one point the tablet started ticking at random. Most disconcerting. A few more firmware tweaks are clearly needed here.

With Samsung apps like S Health and S Translator missing, the list of apps you start out with is fairly short. You get all the standard Google apps including Gmail, Maps and the Play Store, though.

Slightly less expected, you also get Google Navigation, which only features in tablets that have GPS. Lots of budget Android tablets miss this feature out. 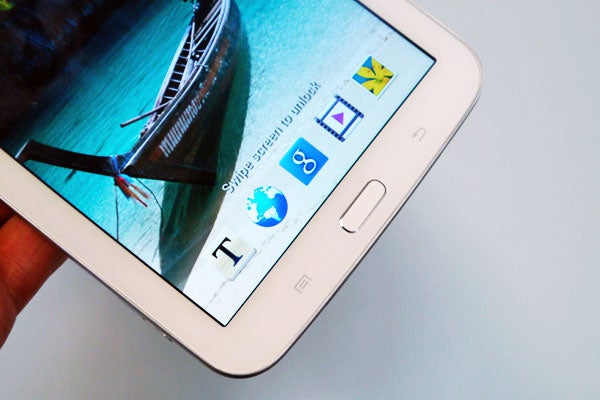 Samsung extras are kept to a minimum. S Planner is a neat, and rather good, calendar app. S Voice is Samsung’s voice assistant – more-or-less as useless as it sounds – Samsung Link lets you connect with other Samsung devices in your home, such as a TV for video streaming, and the Samsung Apps portal comes pre-installed too.

This is Samsung’s alternative to the official Google Play app store – and can feel a little pointless. However, it does sometimes have offers bringing lower prices than Google Play. Don’t forget that your purchases won’t transfer to all your other Android devices, as they do with the official store.

To get your Galaxy Tab 3 7.0 fully loaded with apps, you’ll need to head to Google Play.

The tablet has enough power to play most high-end 3D games, albeit with the odd bit of slow-down. Performance in Real Racing 3 was solid with only minor frame rate drops, although this is likely in part down to the low 1,024 x 600 resolution rather than having bags of power on tap. 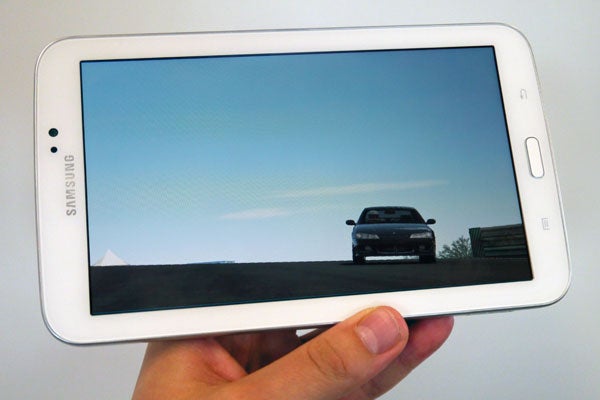