The Galaxy S7 Edge packs a 3,600 mAh battery that’s much larger than the disappointing 2,600 mAh cell sat inside the Galaxy S6 Edge and it performs so much better for it.

Battery life still isn’t perfect though. The iPhone 6S Plus can go a few hours longer and the Moto X Force will last an extra half a day, but even if you’re a heavy user you shouldn’t have to reach for the charger until bedtime.

With moderate to high daily use the S7 Edge tends to leave me with around 25-35% battery life at the end of the day. It drops much more suddenly during intensive tasks – 30 minutes of Hitman Sniper took it down 15% – but it has exceptional standby time. Leaving it unplugged overnight only ate through 2% thanks to Android Marshmallow‘s excellent Doze feature. 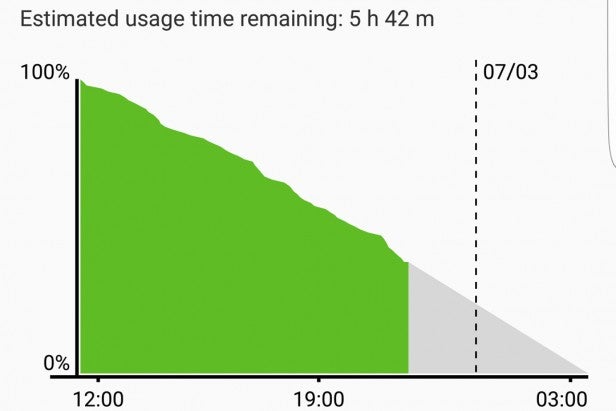 A chart of the battery life over a day

One hour of Spotify streaming over a 4G connection uses up 5% and an episode of House of Cards on Netflix 10%. They’re both good, if far from amazing, results.

If you want to squeeze even more out of the battery then there’s a few power saving modes to choose from. The regular ‘Power saving modes’ gives you about an extra hour, while the ‘Ultra power saving mode’, which turns the whole device into something more akin to Nokia 3310 than a modern day superphone, doubles the time you can keep on going for.

There’s still no removable battery, but the S7 Edge does benefit from adaptive fast charging. You can get up to four hours of use from a 10-minute juice up and it’ll fully recharging in about 90 minutes. You’ll have to use the bundled cable and power block though, not just any charger you have about the house. It is also compatible with wireless chargers, both Qi and PMA standards.

Once a thorn in the side of the Galaxy series, TouchWiz has slowly gotten cleaner, smoother and better. With the Galaxy S7 Edge, the skin has finally reached the point where it’s no longer a serious negative against the phone.

Granted, it’s not as sleek as vanilla Android Marshmallow, but it’s starting to come mightily close. There are fewer useless bundled apps, fewer ‘bleeps’ and ‘blops’ and fewer childish icons. The theming engine from the S6 is still around, so you can do a pretty good job of making Android look just the way Google intended. 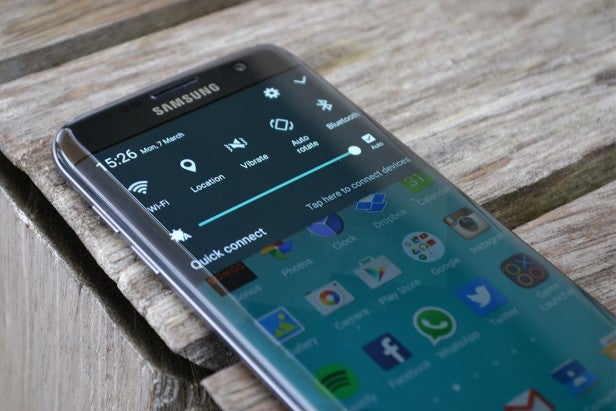 TouchWhiz is much cleaner on the Galaxy S7 Edge

Most of Samsung’s default apps have been cleaned up, to the point where they’re *gasp* attractive. The Phone dialler has some nice animations, S-Health is very capable for tracking how much you move and eat and even the once hideous S-Planner (basically a calendar app) is surprisingly feature rich.

One really nice new addition to TouchWiz is the Game Launcher. This is best described as a super-charged folder for your games, with a few nifty added features. Aside from organising everything, it lets you ‘go-all-Twitch’ and stream your latest round of Clash of Clans, quickly save a screenshot of your latest highscore and pause notifications while you’re in a game.

Game Launcher can also be completely disabled, so if you don’t like the feature, it’s not forced upon you. Something that probably wouldn’t have been included a few years ago. 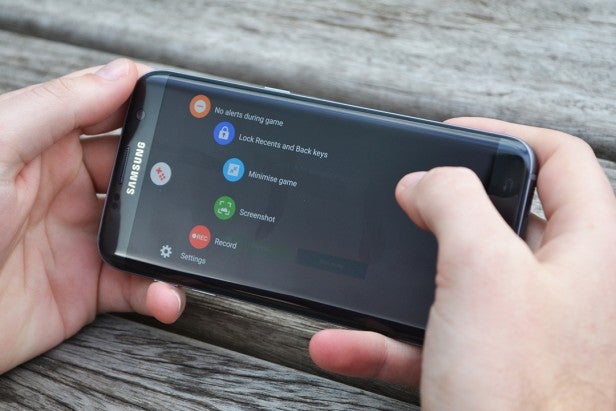 Game Launcher has some handy features, like recording your gameplay and locking the capacitive buttons

There are still quite a few apps that you’ll wish could be removed. Microsoft’s suite of Office and Skype apps come pre installed, and if you don’t plan on using them the best you can do is disable them, which doesn’t delete them from the system memory. Plan on using Chrome instead of Samsung’s default browser? You can’t even disable that so it doesn’t show up.

Even though it has been severely stripped back, TouchWiz is still one of the heavier Android skins. 7.14GB out of the 32GB of internal storage is already eaten up when you switch on the phone, add to that the pre-installed apps and you’ve only about 20GB free to you to use. Comparing a clean 32GB Nexus 6P with the S7 Edge, you’ve got an extra 1GB of storage on the Google handset.

Marshmallow’s adoptable storage has also been disabled, which makes Touchwiz’ hefty footprint all the more annoying. Adoptable storage lets you combine the S7 Edge’s internal storage with a microSD card’s. It’s great, and lets you use install all your apps to the expandable storage.

Being fair, Samsung isn’t the only company to turn the feature off. LG has done the same thing with the LG G5, claiming people wouldn’t be able to quickly change out and swap microSD cards if it was enabled. You can still moves certain apps and your media to a card, but it’s nowhere near as seamless as it should be.