The S6 Edge+ uses Samsung’s TouchWiz UI skin over Android 5.1.1 Lollipop. We’re not big fans of TouchWiz in the TrustedReviews office, but Samsung has managed to make the latest version much better.

Long gone are the days of lag and hefty dollops of bloatware and TouchWiz is now on par with most other Android skins. We’d still prefer the look and feel of unadulterated Android though.

Still the S6 Edge+ is accessible, if you’re not an Android native, and comes with a few Samsung apps preloaded. Some are more useful than others. 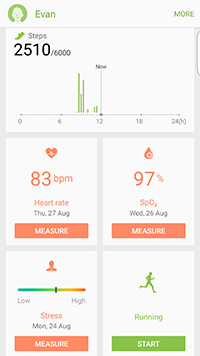 S Health is one that’s been around for a while, but Samsung has been constantly upgrading it. Thanks to the sensor next to the rear camera the S6 Edge+ can track your heart rate, blood oxygen and stress (although I’m dubious of the latter as there’s no explanation of how it actually works) as well as steps.

Smart Manager looks after the health of the phone. Here you can zap all the naughty apps eating away at that hefty 4GB of RAM as well as check the internal storage, battery and the built-in antivirus’ status. It’s also where you can get to Knox, Samsung’s enterprise-level security system aimed for those wanting their work safe and secure.

Microsoft apps such as Word, Excel and Skype also have a folder but aren’t preinstalled, you’ll need to do this yourself if you want to do it.

Then there’s a calendar app called S Planner and Samsung’s irrelevant competitor to Google Voice, Siri and Cortana called S Voice. None of these are particularly useful.

Aside from multi window that lets you use two apps on screen at the same time, one app that does merit looking at is SideSync 4.

SideSync lets you connect you Samsung phone to your PC. Until version 3 this was limited to Samsung laptops, but SideSync version 4 not only works with any PC (Windows XP and above) it also comes with Mac support. It’s like Apple’s Continuity except you can use it across platforms.

Aside from being able to copy and paste directly to and from your phone and PC you can also run a windows with your phone’s screen virtualised on it. That’s right you can play your Android games on your PC!

As awesome as that sounds SideSync is limited when your phone connects to your computer via Wi-Fi – you can also connect via USB. In our tests the connection proved stable (barring the odd PC app crashing) but there is some lag between actioning something and it actually happening. So maybe don’t try tense and precise platformers. 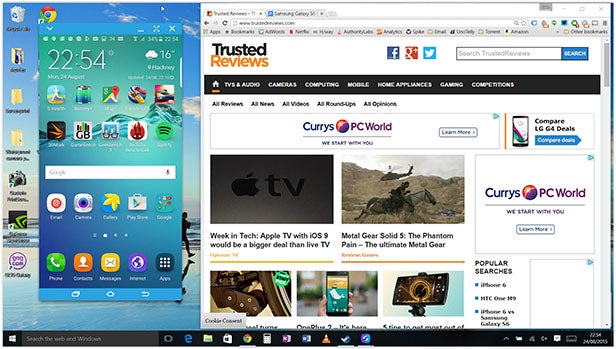 Of course SideSync isn’t about playing Angry Birds on your PC, it’s about productivity. As such it’s a hugely useful tool and lets you get on with work while replying to texts and even taking calls without having to take yourself away from your work.

The S6 Edge+ doesn’t replace the Note 5 like for like, but it’s your only option if you live in Europe and want a brand new, large-screen Samsung.

Unlike the Note you don’t get the S Pen, what you get instead are Edge apps – apps designed to take advantage of the curved display. In general, we found the apps are a poor substitute for an S Pen, but not entirely without merit.

When the screen is on you can flick your thumb over a tab on the edge to bring up your five favourite contacts, if you’ve had a message or missed call you can view these too. Swipe again and contacts are replaced with your five favourite apps. It’s a neat, if not earth-shattering feature.

With the screen off you can activate the edge by giving it a swift up and down swipe. This gives you access to the “Information Screen” – a ticker with feeds you can choose. This can be the weather, steps you’ve walked or latest news and you can swipe through multiple feeds.

It’s a good way of getting information tactfully while in meetings but it does have a delay. When you start using it you’ll think it needs multiple swipes to activate but actually it just takes a couple of seconds to wake up.