What is the Samsung Galaxy S4 Zoom?

The Samsung Galaxy Camera is a decent camera, but it lacks the extra phone functionality that should make sharing your photos so much easier. The Zoom hopes to put the final nail in the compact camera’s coffin. Does it? Let’s find out.

See the Zoom S4 in action from the launch event in June:

The Samsung Galaxy S4 Zoom follows the design principles of the Samsung Galaxy S4. It has the same white plastic body and while this gives the S4 Zoom a glossy, shiny look, it doesn’t feel as nice to hold as the iPhone 5 or the HTC One – not by a long chalk. Plenty of column inches have gone into the merits of metal vs. plastic so we won’t repeat them here, but we can’t help yearning after something more luxurious considering the price tag.

The camera part of the S4 Zoom is modelled closely on the Samsung Galaxy Camera as it adopts the same curved design around the grip. Unlike the Galaxy Camera, however, the lens has what Samsung calls a ‘Zoom Ring’. This lets you control the zoom, access camera modes and quickly share photos just by twisting a ring on the lens. 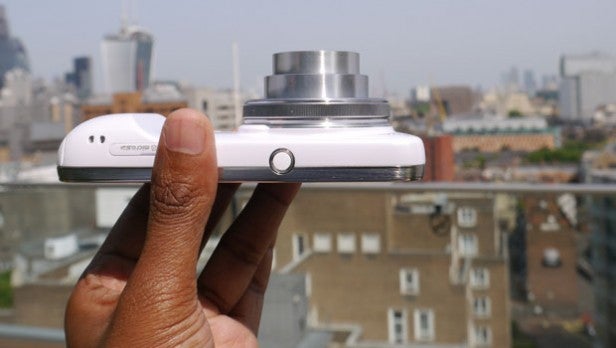 In itself the weight isn’t a problem, but the lens makes the Zoom feel top-heavy when held in portrait mode. It’s less noticeable when taking pictures in landscape mode, but it’s worth noting that the S4 Zoom doesn’t have a textured handgrip like the Samsung Galaxy Camera.

More to the point, the S4 Zoom is simply not pocket friendly. That’s really down to the camera lens. It adds the extra bulk to make it press against your leg. It’s definitely more suitable to keep in a bag than to slip into a pair of jeans.

There are a few subtle layout differences between the S4 Zoom and S4, but the major one is the MicroSD card slot on the left edge (it’s under the backplate on the S4) and the addition of a small plugged hole to let you hook up a tripod. 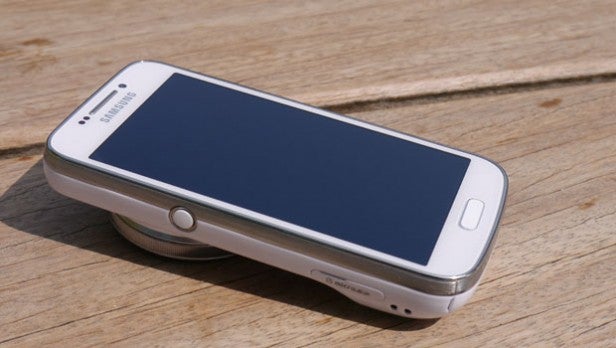 It might have S4 in the name, but again the S4 Zoom shares more in common with the S4 Mini than their big name sibling. This time it’s in the screen department, where the S4 Zoom has the same 4.3-inch Super AMOLED touchscreen display as the Mini, though it adds Gorilla Glass 3 to give the display an extra layer of protection.

The S4 Zoom’s screen retains the same less than impressive 960 x 540 resolution, too. Its 256ppi pixel density is nothing like as sharp as the S4’s 1080p, 441ppi screen. It’s still vibrant and extremely bright, but the loss of sharpness really shows when you play HD videos or games.

We can’t fault the S4 Zoom’s responsiveness, though. It reacts just as smoothly to touch and gestures like pinch and zoom as any other top end smartphone we’ve tried out. For all its shortcomings in the resolution department, the screen is still more than adequate for camera and smartphone duties.