On the face of things there is very little change between the S3 and the Samsung Galaxy S4 interface. Both run a TouchWiz skinned version of Google’s Android OS and, superficially, look the same. Delve beneath the surface, however, and it’s clear that the Samsung Galaxy S4 is a world apart from the S3 with all manner of new features, functions and software additions thrown into the mix to help create a better-rounded, detailed user experience.

Skinned almost beyond recognition of its Android base, the Samsung Galaxy S4 TouchWiz UI sees Samsung stamp its seal on the phone, ridding it of Google’s traditional Android icons in favour of its own, bespoke and only marginally altered options.

Running Google’s Android 4.2.2 Jelly Bean direct from the box, the Samsung Galaxy S4 has all the key features found on the likes of the Google Nexus 4, the handset that launched the latest Android OS. It’s widely expected that Google will launch Android 5.0 Key Lime Pie in
the coming weeks, a release that will see the S4 quickly become dated
and fall behind the crowd unless offered early updates. However, given
the handset’s leading flagship status means peace
of mind on this front is all but guaranteed for the foreseeable future,
provided your network provider obliges. 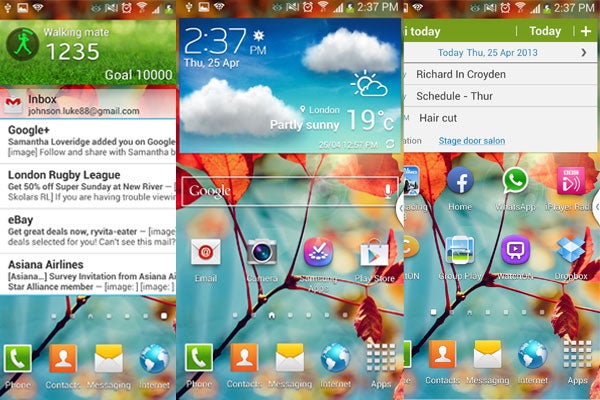 In terms of usability, the Samsung Galaxy S4 couldn’t be more accommodating. Aside from the standard point and press touchscreen controls and simplistic naming system for pre-installed services and applications, the S4 lets less tech savvy users – or those not interested in tinkering too much – to opt for an ‘Easy Mode’ home screen setup.

It rids the phone of all superfluous bells and whistles and replaces them with large block buttons and oversized, strategically placed app icons. While this feature is not for everyone, it is a quick, hassle-free way to make the S4 more accessible to those who require a more streamlined service.

Outside of the Easy Mode, however, the Samsung Galaxy S4 has all manner of software and interface features that enhance it and set it apart from the Android masses. 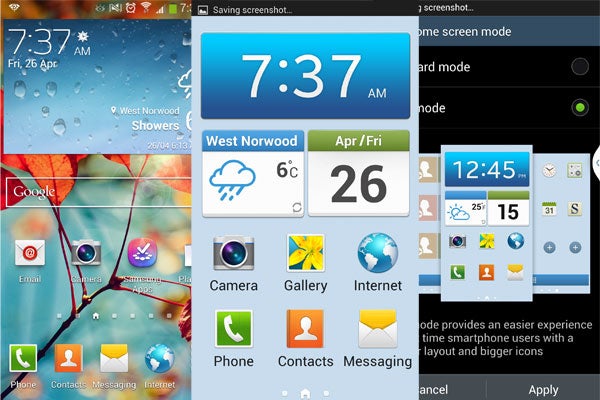 One of the most publicised and talked about Samsung Galaxy S4 features ahead of the handset’s official launch, Smart Scroll is strangely one of its more irritating attributes and, in our opinion, one of its least useful.

In theory it combines eye tracking with tilting the S4 forwards or backwards to scroll through pages, saving you the ‘trouble’ of using the touchscreen. In reality, Smart Scroll struggles in low light, direct light and if you wear glasses, and the rest of the time it’s just confusing and annoying. We recommend you disable it. 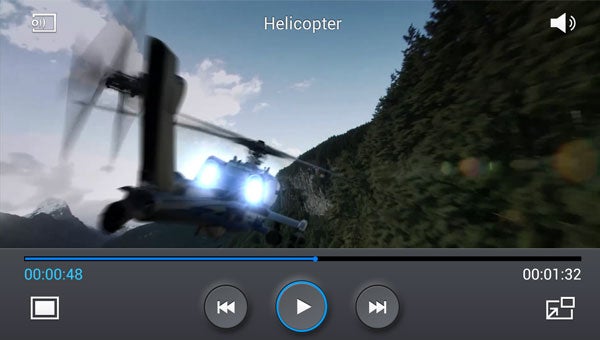 Smart Scroll is more useful, albeit only just. Unlike Smart Scroll, it doesn’t clutter the display with all manner of pop-up icons, it simply tracks your eyes when watching video and pauses it when you look away.

Prompt, precise and at times a little eerie, Smart Pause is hard to fool, handling our tests with aplomb and ensuring that we didn’t miss more than a fraction of video when distracted or losing focus. It works fine and is well worth keeping.

Samsung’s answer to Apple’s Siri service, S Voice on the Samsung Galaxy S4 is what we have come to expect from most voice command services – a slightly slow alternative to standard input options that just about struggles its way to the correct result after much deliberation.

S Voice is a strong rival to the better known Siri, but suffers from the same issues. We find it hard to see when users would utilise S Voice over simply carrying out an action themselves. Given the stuttering nature of the voice activated services we found few examples of searches, actions or tasks we couldn’t do quicker and more accurately ourselves instead of relying on sophisticated, albeit still issue ridden, voice recognition software. 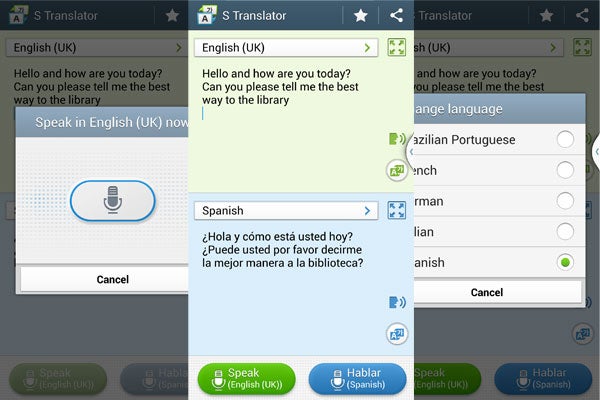 The Samsung Galaxy S4 S Translator app will change the lives of international business users, travellers and holiday makers alike, but will be redundant for many users and just another ‘extra’ to ignore.

In use, the Samsung Galaxy S4 S Translator software is endearingly intuitive to use, with both voice and text-based input methods available to further assist in the simple nature of making the world a smaller place and allowing users to overcome language barriers without struggle.

As a further benefit, having translated your desired phrases into one of many language options, the S Translator then lets you save the translation as a spoken word audio file, ideal for less stilted communications in foreign countries.

What’s more, the S Translator functionality ties in with other functions and applications, such as the mail app. 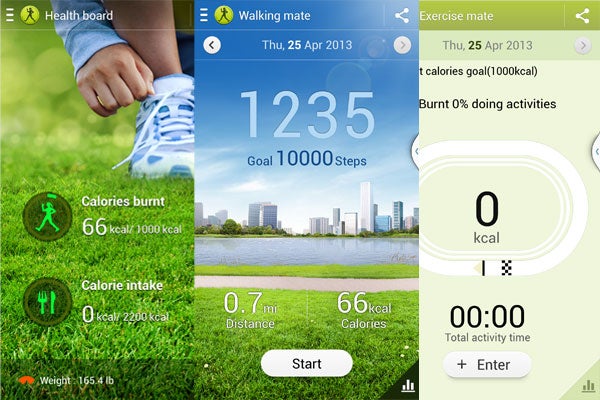 Jumping wholeheartedly on the recent trend of fitness gadgets, and health and wellbeing monitors, S Health is an integrated app that offers insight into personal activity and lifestyle.

On its own, the Samsung Galaxy S4 S Health app is a useful, welcome addition, but one that offers little more than a nicely packaged remodelling of long available third-party apps. Although the handset is set to receive the backing of a number of optional accessories, including a dedicated Samsung Wi-Fi scale and motion tracking wristband, on its own the S4 S Health app is somewhat limited.

With the Food Tracker offering little in terms of upfront assistance, requiring users to manually enter meals and their calorific content, the Walking Mate pedometer is likely to get more use. It gives you a, largely accurate, idea of how far you travel and how many steps you take. But it has to be activated and deactivated either side of every use, otherwise it’ll drain your battery needlessly and give you misleading data. It’s a poor substitute for a proper activity tracker, like the Fitbit One. 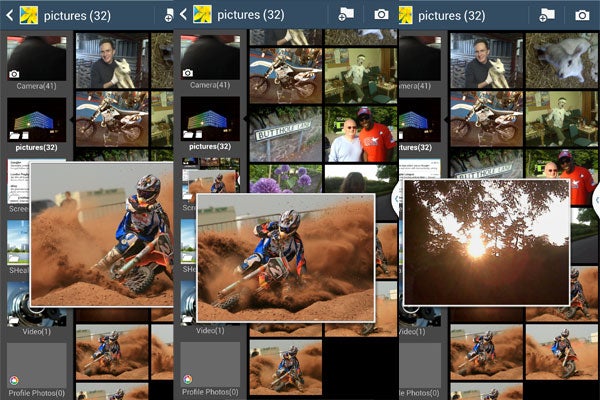 Where Smart Scroll proved ineffective and more irritating than helpful, Air View is one of the Samsung Galaxy S4’s most impressive features. It provides pop-up previews of all manner of content just by hovering over items, so you don’t have to touch the screen when you have grubby paws.

It’s very accurate and responsive, it keeps track of swift and erratic movements and there’s little lag or stuttering. It’s great for zooming in out of web pages, and also lets you preview messages – so you can check you have the right thread rather than going in and then back again. Further highlights include the ability to preview images from a gallery, again saving considerable time and hassle with repeated jumps back and forth.

A hit and miss addition not quite as well-integrated as Air View, Air Gesture lets you switch between tabs and images in a gallery simply by waving your hand above the display in the direction you wish content to move. Although perfect for when not wanting to smear the S4’s stunning 5-inch display with greasy food stained finger marks, the Air Gesture options are a little quick on the draw, repeatedly switching us between tabs in the web browser when doing little else other than scratching our face or talking in a somewhat animated fashion.