The Samsung Galaxy S4 Active uses Android 4.2 with the same custom UI you’ll find on all of this year’s top-end Samsung Android phones, commonly called TouchWiz. This jams many more features into Android than you get as standard, and not through additional apps.

Some of the most talked-about extras alter the way you interact with the phone. These include Smart Screen, Air View and motion gestures. 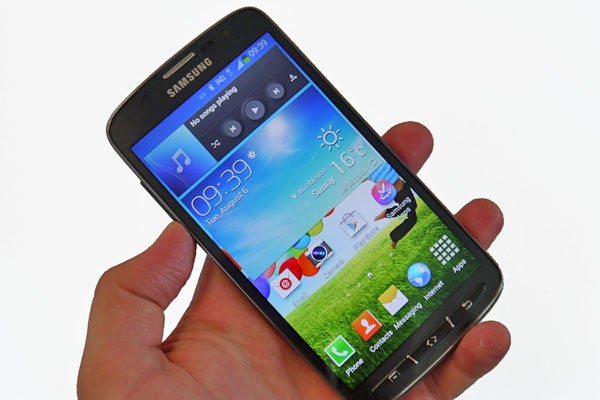 They use different techy bits within the phone to check for your input or presence. Smart Screen uses the front camera to stop the screen from turning off or rotating while you’re there watching or reading, it’ll pause video when you look away and let you scroll through an article by tilting your head, too.

Air View uses the hyper-sensitive touchscreen to detect when your finger is hovering above the screen and gives you previews of images or enlarges areas of a webpage. Additional gestures let you controls bits and pieces of the phone’s navigation with either a wave of the hand over the front face sensor or a tilt of the Galaxy S4 Active.

If these sound a little superfluous, it’s because they are for the most part. Some spectacularly so. We ended up turning off the majority of them, although it’s a good thing that Samsung gives you pretty precise control over this, letting you toggle specific bits within each control type, rather than just whole groups.

Other than these supremely gadgety extras, Galaxy S4 Active’s UI also comes with its own look. It’s a cheery UI compared with something like the more spare and stylish HTC Sense 5.0, seen in the HTC One.

Apps that come pre-installed are also a core part of any custom UI, because these generally can’t be uninstalled. If there are too many things you’ll never use, they become a weight on the interface as well as a device’s internal memory.

There are a whole lot of apps pre-installed in the Galaxy S4 Active, but thankfully some are quite useful.

S Planner is a fairly intensive calendar app that makes good use of the large, high-resolution screen, packing more event info onto the page than most. S Note is a handy note-taking app that lets you add voice recording, typed notes, camera shots and scribbles into one virtual ‘post-it’. Apps like these have developed or formulated over the long life of TouchWiz (which has been about since the early days of Samsung’s Android phones), and it shows.

The more specific apps are likely to be of more limited use, such as S Translator and S Health. S Translator is a language translation app that unfortunately (like several Samsung apps) pushes you into signing up for a Samsung account. S Health is a basic fitness, exercise and diet tracker.

It’s not a great deal of use to real fitness fans, though, as it doesn’t offer accurate tracking of cycling or running using GPS – it primarily uses the accelerometer to count your steps. Most regular runners and cyclists would be better off with something like Endomondo. 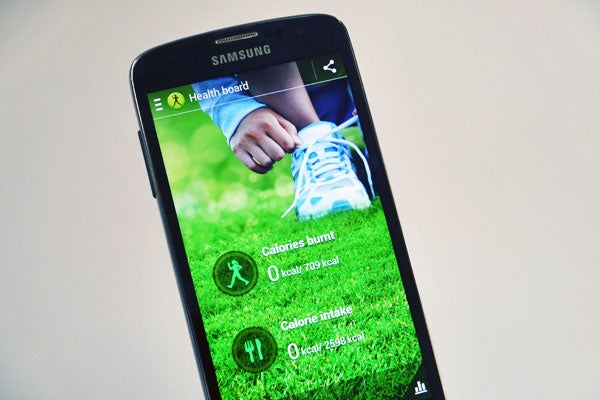 The perils of being chained to your desk – 0 calories burnt

With every year, Samsung seems more keen to appeal to a wider audience with its TouchWiz apps, but some moves make the Galaxy S4 Active a bit trickier, or more confusing, to use. For example, there are proprietary Samsung app and music/video/books portals, called Samsung Apps and Samsung Hub. These are in direct competition with the Google Play stores also found on the phone.

There’s a civil war going on here, and it’s one in which the less experienced Android user is the biggest victim.

Forget the amount of confusing bloat present here, though, and you can only conclude the Galaxy S4 Active is a very impressive, super-powerful phone. It uses the same quad-core 1.9GHz Snapdragon 600 processor as the Galaxy S4.

At present, nothing can stand in its way, with performance in all of our current benchmarks being excellent. In Real Racing 3, the frame rate is smooth, and in the AnTuTu benchmark it comes out with around 26,000 points in each run. This is a seriously powerful phone. 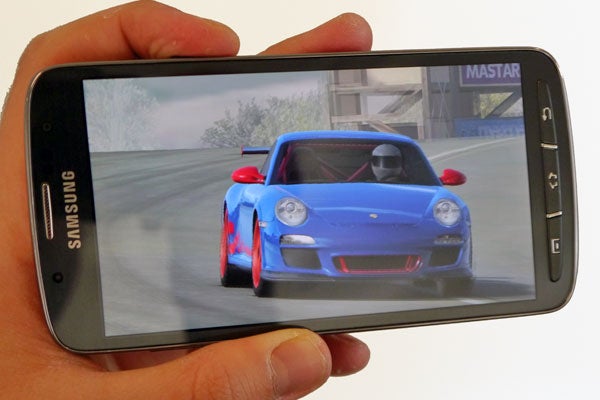 Day-to-day performance is great too, and web browsing speed is excellent. This is where the ultra-high resolution of the screen comes in most handy, as small text looks very sharp.