Sharing a number of design characteristics with its full-sized sibling, the 4-inch Samsung Galaxy S3 Mini features a reduced spec and lower price point than its predecessor, whilst maintaining some of the desirability and pleasingly curved aesthetics of the full sized model.

Despite the handset featuring a similar design to the high-end Samsung Galaxy S3, that is where the similarities between the two devices end. Tasked with bringing the S3 brand to a wider audience, the Samsung Galaxy S3 Mini is designed to appeal to younger markets, with its heavily reduced specs sheet, and lower price point testament to this.

Playing host to a 1GHz dual-core Cortex A9 processor, the Samsung Galaxy S3 Mini ticks all the boxes necessary to appease mid-market expectations, without ever standing out from the crowd. Available in Ceramic White and Pebble Blue colour options, the Mini adds 1GB of RAM, a 1500mAh battery and a 5-megapixel rear-mounted camera to the fray.

What’s more, the Samsung Galaxy S3 Mini price tag does not help the handset separate itself from the competition either, with the not inconsiderable £269.99 fee, when snapped up on a Pay-As-You-Go basis, seeing the device have the same impact on the wallet as the specs superior Google Nexus 4 and the Sony Xperia S.

Unlike the Google Nexus 4 and Sony Xperia S, however, the S3 Mini does not have the same level of stand-out specs and performance capabilities that, on paper at least, offer reassurance in the handset’s potential. We take a closer look at how the Samsung Galaxy S3 Mini stands up to the competition. 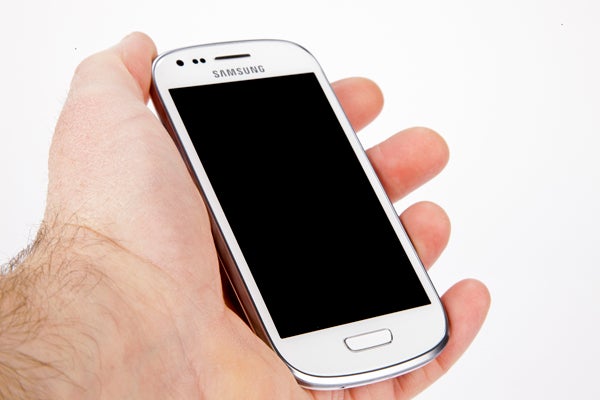 Piggybacking on the success of its illustrious sibling, the Samsung Galaxy S3 Mini plays host to a number of design characteristics found on its big brother, whilst a smaller 4-inch screen makes the handset a more viable mid-market offering and one that will appeal to younger markets.

Appearing as a shrunken rendition of its iPhone 5 rivalling counterpart, the Samsung Galaxy S3 Mini features the now recognisable pebble-esque curved edge design of the original Samsung Galaxy S3. Although a slightly curved, removable rear plate ensures the Samsung Galaxy S3 Mini sits relatively comfortably within the hand, the device feels slightly undersized by modern standards. Working in the handset’s favour, the S3 Mini, despite a predominately plastic construction, feels well pieced together for the most part, offering up little unwanted flex on unnerving creaking when put under stress.

Lining up at just 9.9mm thick and 111.5g in weight, the Samsung Galaxy S3 Mini is compact and well-balanced, with the modest weight distributed evenly throughout the handset. Despite these largely pleasing aesthetics, however, the heavily rounded, almost bulbous base of the handset and its slick, glossed plastic finish mean the device can prove slightly difficult to grip on occasion.

Shy on the physical buttons, the smooth edged finish of the Samsung Galaxy S3 Mini is largely untainted, with just a trio of physical controls (power, volume and home), and a microUSB charger port, located centrally on the handset’s base, detracting from the pleasing finish.

Whilst the handset does not suffer from poorly placed controls, ensuring accidental presses of the power/sleep button are not performance depleting issues; the Samsung Galaxy S3 Mini home button is not without its user aggrieving problems.

With the physical home button proving a squat, squashed affair, the integral control option offers no height but plenty of width meaning that, during testing and general use, the button was overshadowed by our thumbs, an issue that caused the handset to become slightly troublesome and far natural to use. Further detracting from a natural user experience, the sub-sized nature of this home button gives the feeling that the button has been broken and only a fragment of its intended form remains, hardly the most comfortable of offerings. 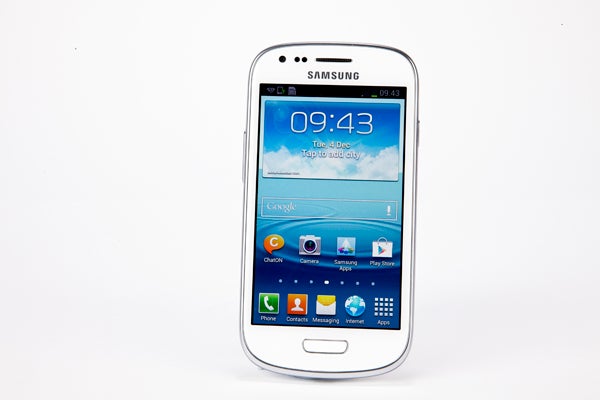 Although we have come to expect a lot of Samsung’s displays, the low res offering fitted to the Samsung Galaxy S3 is significantly below par when compared with its similarly priced rivals, such as the 1280 x 768p Google Nexus 4 screen, and one which fails to appease itself to continued video playback or app-based game playing.

With the handset’s inbuilt light sensor proving effective at offering the optimal screen brightness to the surrounding settings, the Samsung Galaxy S3 Mini screen also handles its own when in use in bright outdoor environments of direct sunlight, suffering only minor levels of performance depleting, eye-straining glare.

As tends to be the case with AMOLED screens, the colours and contrast ratios offered by the Samsung Galaxy S3 Mini screen appear over exaggerated and far from natural, an issue that, although quickly overlooked through continued use, does detract from and diminish the subtleties of a high quality image. When comparing the screen with the ClearBlack options found on recent Nokia handsets, such as the Nokia Lumia 800, there is a noticeable change in the artificially warmed colour notes found on the Samsung branded device.

Further compounding the handset’s poor screen to levels of pure annoyance, viewing web pages and text-heavy documents on the Samsung Galaxy S3 Mini screen results in visibly pixelated content which fails to encourage continued use. Although this issue will not prevent essential use of the handset’s core features, unlike a device such as the iPad mini, which pairs a less than pristinely sharp display with a raft of performance enhancing features, the S3 Mini sees its screen line up as just one of a number of core issues that fail to inspire use in the device.

That said, the Samsung Galaxy S3 Mini screen is not without its positives. In terms of responsiveness and transitions the device is second to none. Proving highly responsive to all touch based commands, from single finger actions to more advance features like pinch-to-zoom, the screen of the S3 sibling helps create a predominately immersive and seamless user experience when transitioning between home screens, menus and in-app pages.

Whilst the Samsung Galaxy S3 Mini screen would be a welcome addition to a handset with an entry-level price point, given the device’s near £270 PAYG billing, the 800 x 480p resolution option on offer falls considerably below expectations and maintains a level of disappointment throughout all levels of use with the 4-inch handset.