In typical Samsung fashion, the Plus model packs all the features of the smaller handset alongside adding a couple of extras into the mix. You can pick up an S10 version with 1TB of storage (up that to 1.5TB with SD cards) and 12GB of RAM. Samsung rightly calls this the Performance Edition.

The version I have for review is the slightly more modest model with 8GB of RAM, 128GB of  storage; it sits as the default, base model.

My review unit is powered by the Exynos 9820, an 8nm chipset developed by Samsung itself – you’ll find this in all models outside the USA. Live in States? Then your model will come running a Qualcomm Snapdragon 855; I’ve yet to use this version. As is the case with the iPhone’s A12 Bionic and Huawei’s Kirin 980 chips, the 855 is constructed using 7nm architecture, meaning it’s  more powerful but not at the expense of battery life. Well, that’s the idea.

Every year these chips get that little bit faster, both in terms of processing and graphics. Nevertheless, in actual use the differences between generations are often hard to spot. This is the case here: the S10 Plus is a very fast phone; however, it isn’t one that feels any faster than last year’s S9. It achieves higher benchmark scores (which you can see in the graphs below), and running it next to an S9 you will see marginal improvements to app opening times and game loading times, but it’s nothing that will make you want to upgrade. 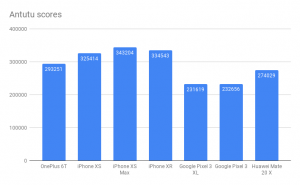 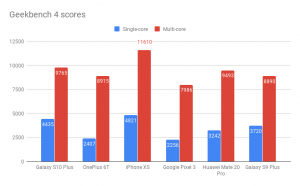 Geekbench tests single and multi core performance of the processor 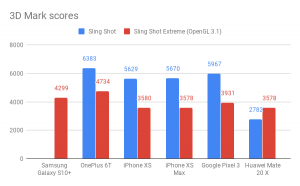 Whether such performance remains as such over time also remains to be seen. Past Galaxy models running Exynos chips have had a tendency to suffer slowdown following extended use. Hopefully, the spacious 8GB of RAM should make this less likely to happen this time around.

That generous amount of RAM does lead to excellent multitasking, with apps staying loaded in their live state for sometimes an entire day – which means you won’t be left having to constantly reload items every couple of hours. The latter was a real issue with the Galaxy S9, since that device had only 4GB of RAM.

You’ll hear the word “5G” more often in 2019, with numerous handsets released over the coming few months taking advantage of the next generation of mobile connectivity. However, the S10 Plus won’t be able to connect to 5G networks from EE, Three or anyone else. Instead, Samsung has decided to release a separate 5G-capable device in the Galaxy S10 5G, which we’ll see when the networks begin to appear in the next few months.

Audio has never been a strong point with the S-series phones. This mainly a result of Samsung’s focus on squeezing as much screen in as possible, which means there’s little space remaining for speakers. The setup here is made up of a downward-firing speaker on the bottom, paired with a thin grille just above the display. Audio is emitted from both, with okay separation; it’s just a shame that audio is a little tinny and easily distorts at higher volumes. It’s a similar case for phone calls, which can also sound a bit weak.

Happily, the S10 Plus does include headphone jack, which sits next to the USB-C port along the phone’s bottom edge. The classic 3.5mm port is a becoming something of rarity on high-end phones, and for those who still love wired headphones this will be a big deal.

All new entries in the Galaxy S series ship with Android 9 Pie and the recently unveiled One UI. This is Samsung’s reinvention of its software and it’s already available on certain versions of the Galaxy S9 and Galaxy Note 9. 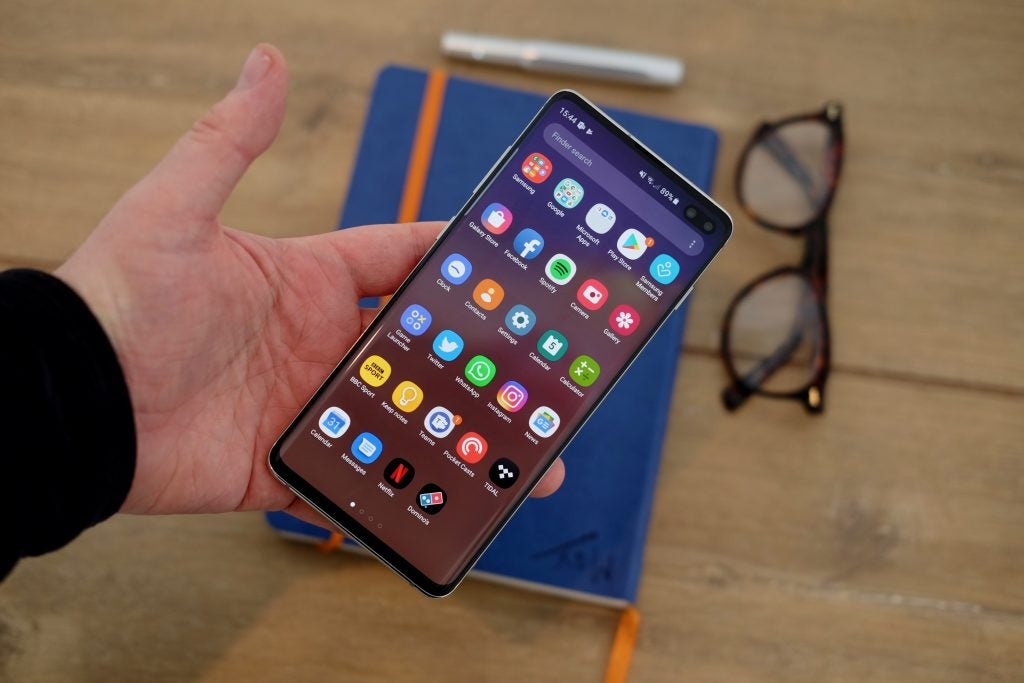 The focus is on being able to use apps one-handed, with frequently used items pushed down towards the bottom of the screen. The camera UI now has a very iOS-feel to it, incorporating AI-based elements too. The whole system is meant to learn your behaviour and therefore allow you to open those frequently used apps quicker. It isn’t obvious so far whether this works, although I’d expect that it would need some time in order to really learn your behaviour.

One UI might be a reinvention of the software but it still feels very much like a Samsung UI. There’s a lot going on here, with Samsung versions of Google’s apps – calendar, gallery, messages, internet – everywhere and plenty of its own services baked right in. If you’re used to using Google services, I don’t think any of these alternative apps or options will sway you.

What Samsung is really good at is including lots of genuinely useful extras in the software. The Battery Saver mode lets you alter performance and screen resolution to eke out extra juice, while the Night mode turns all menus and native apps black. There’s also a much simplified settings panel that isn’t a chore to navigate through.

Gesture control is present too, letting you ditch the typical on-screen navigation keys for a series of swipes. A swipe up from the middle takes you back to your homescreen, one from the left takes you back and one from the right takes into the multitasking view. In my opinion, I don’t believe that any Android manufacturer has gestures nailed just yet, and while Samsung offers a decent solution, it’s nowhere near as intuitive as Apple’s version on the iPhone X. Too many times I’ve tried to go back and it’s taken me home instead, or my swipe simply hasn’t registered at all. Of course, when it works it’s great, but it needs a little more thought. 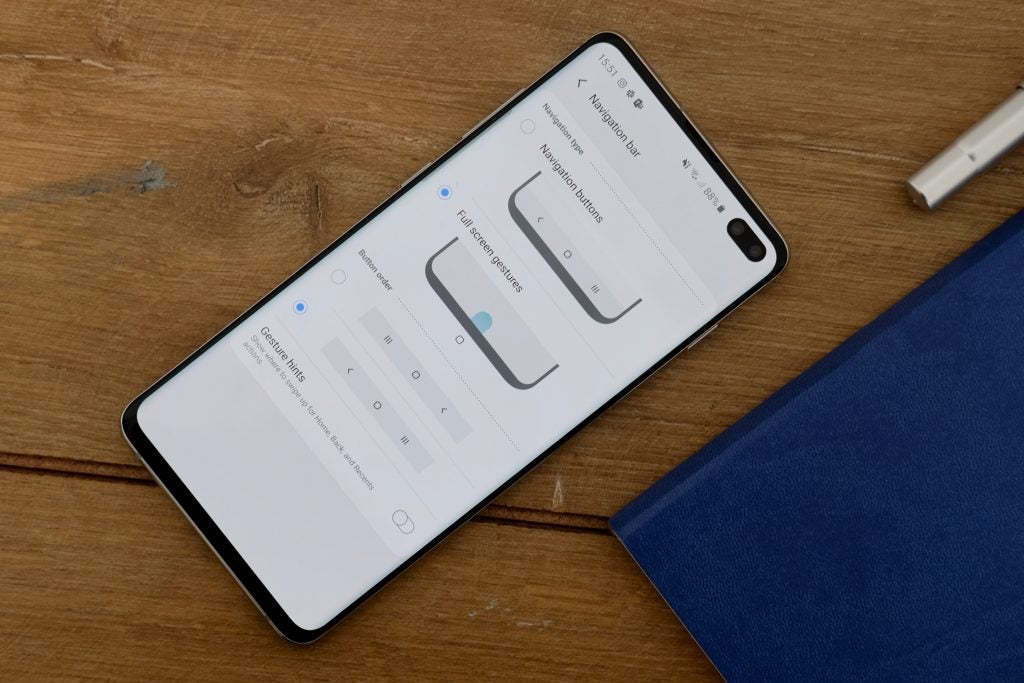 As good as the basis of One UI is, it still shows Samsung’s lack of design ability when it comes to software. Like Huawei, Samsung can build gorgeous phones – and seriously ugly software. From the bulbous, child-like icons to the still utterly useless Bixby virtual assistant, there’s still plenty of work to be done here.

Speaking of Bixby, the voice assistant remains in very much the same state as seen in the Note 9. While it can answer basic questions such as what’s the weather, who’s the president of the United States, test it with more challenging ones and multi-stringed requests and Bixby falls down.

Note that you can (sort of) replace the functionality of the Bixby key, although you can’t switch it to Google Assistant and you have to be signed into a Samsung account for the option to appear.