What is the Samsung Galaxy S10’s battery life like?

I consider “regular use” consisting of using the Samsung Galaxy S10 as my primary smartphone throughout the 10-day review process. This involves listening to music on the morning and evening commute, taking and making a few calls, regularly checking social media and email feeds, and playing a couple of games. All stuff you’d expect to do on a phone every day.

There’s also support for HDR video here, and an extra Enhancer mode that will boost brightness in apps such as YouTube and Netflix to create an extra HDR effect. While it does give a brighter look to videos, it consumes battery at a far quicker pace.

For instance, watching an hour of  Netflix at 50% brightness took the battery down 14% without the enhancer mode and 19% with it enabled. This is slightly worse than I’d expect, with most phones using up about 10% for an hour.

Gaming put a bigger drain on the battery, with it losing around 17-21% per hour playing games such as Asphalt 9 and 14-18% in simpler titles such as Monument Valley 2 and Alto’s Odyssey. As was the case with video, I was surprised at how varied the results were during my time with the phone.

In our Samsung Galaxy S10 Plus review, I felt the phone took too much time to charge and could have done with improved charging speeds to juice up that 4000mAh in a shorter amount of time. With the regular S10 the problem is less obvious, since the battery capacity is smaller and therefore it requires less time to charge. 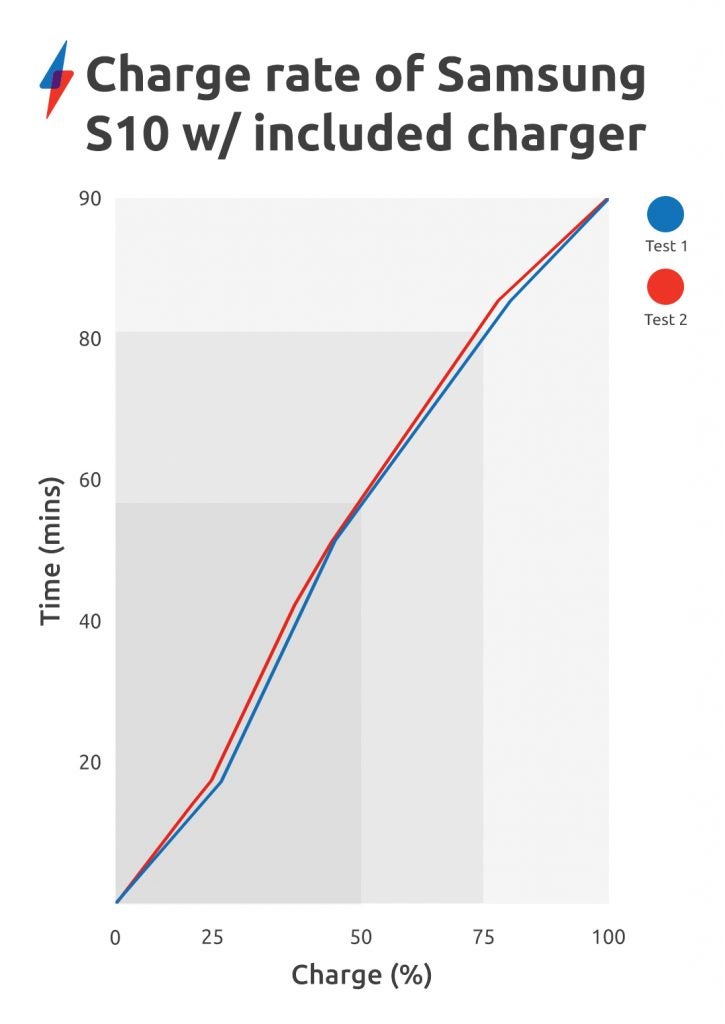 Using the bundled charger and USB-C cable I managed to charge the phone to full in roughly 90 minutes, achieving 60% in an hour. While this far faster than an iPhone XS – Apple’s flagship can take hours to go from 0-100% – it isn’t as fast as the Huawei Mate 20 Pro. Huawei’s Super Charge tech fully charges the same device in just over an hour. The above graph shows the recharge time over two tests.