Samsung can safely be described as a leader in the Android smartphone space, with its Galaxy-based line-up – the flagship of which is the Android 2.3-running Nexus S – going great guns. As such, the Galaxy Player 50 isn’t that surprising a release. It was only ever a matter of time before Samsung followed Apple’s lead in taking a smartphone OS and paring it down to fit on a media player. We’re mostly surprised it’s taken this long. 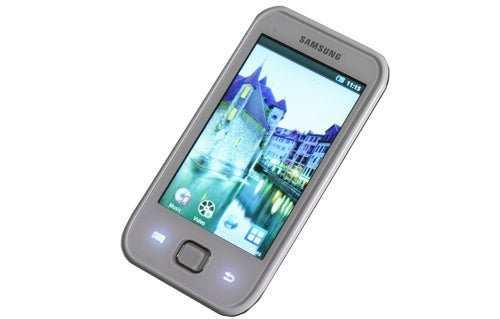 Worryingly for Samsung specifically, and those interested in Android media players in general, we think Samsung should have waited even longer to release the Galaxy Player 50. It’s not exactly a terrible product; it has the potential to be a half, if not very, decent portable media player. No, the problem is that the Galaxy Player 50 in its current state is nigh-unusable. Arguably we’d have been less frustrated if there wasn’t so much potential – at least it wouldn’t be failing to live up to it so badly.


The physical design of the Galaxy Player 50 is its first pitfall. Although pitched cheaper, at about £150 – close to £40 less than the 8GB iPod touch – its plastic construction feels much cheaper. A silver accent around the edge of both the player and the home button add a touch of classiness, but the overall look isn’t exciting, especially compared to the YP-R1 – Samsung’s last touchscreen player. 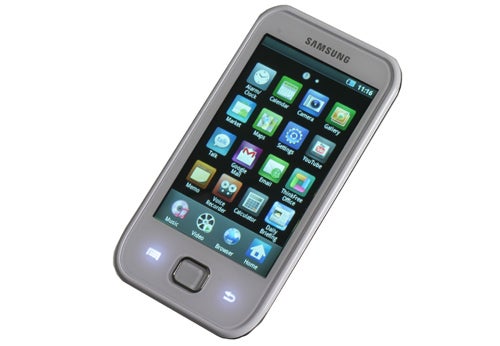 Similarly disappointing and on a less purely aesthetic level is the Galaxy Player 50’s display. At 3.2in diagonally, it’s not especially large and the resolution of 320 x 240 pixels is poor, rendering text and images with a complete lack of sharpness. It’s not much use being bright and offering vivid colours when the screen is this cramped.


Although capacitive, the touch-sensitive display proved touch-insensitive with frustrating frequency, fairing worse than many resistive screens. The problems seem to be software, not hardware, based, as the unresponsiveness only kicks in when using applications. Why isn’t really important though, it’s a massive problem for the Galaxy Player 50 to the extent that it becomes literally unusable at times. And that’s only after the four minutes or so it takes to turn on! 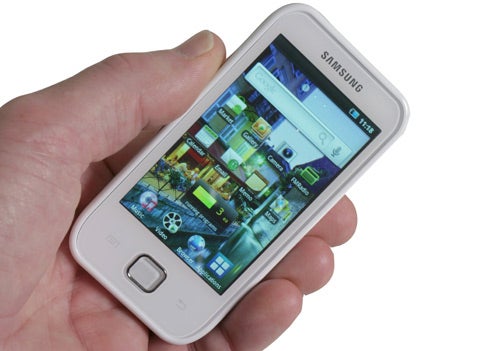 Enjoying a small victory where possible, adding media on a MicroSD works, the Galaxy Player 50 scanning for files it can play and adding them to its media library. We’d have preferred the card slot to be accessible without needing to remove the case at the back of the player, but it’s not a massive inconvenience. If you end up using Samsung’s Kies utility, however, you’ll learn how far from convenient an aspect of the Galaxy Player 50 can be.

There’s a fundamental problem, however, with the storage space recognised on the device. Let alone the fact that the Galaxy Player 50 only shows 6GB of internal storage, when it’s supposed to be an 8GB device, it also shows “0.00B/0.00B” of it as being available to install applications, or transfer media, to. In other words you pretty much can’t use the Galaxy Player 50 as a media player out of the box and have to add your own storage.

Curiously enough the camera is able to store images on the internal flash memory, despite the player insisting there’s no capacity. Aside from that it isn’t likely to win much affection. While it is indeed able to capture images digitally, that’s about the best that can be said of it. The resultant photos are low detail, noisy and often blurry as it’s hard to hold the player still and the shutter speed is a little on the low side. Video recording is also hampered by the Galaxy Player 50’s low resolution but playback is smooth, so if you decide you really need it it’s not a complete write off.


It’s disappointing to see the Galaxy Player 50 running version 2.1 of Android, which is getting long in the tooth now. Samsung has softened that blow by skinning the OS to give it a slightly less clunky feel; features such as dedicated video, music, web browser and applications shortcuts parked in a tray at the bottom of the main home screen (there are others on which you can place widgets and shortcuts) work well.

With the biggest of the Galaxy Player 50’s issues, all of the aforementioned problems pale in comparison and all praises are rendered insignificant. From time to time, for no apparent reason the devise resets itself to its factory state. This seems to hark back to the schizophrenically unavailable memory space of the Galaxy Player 50, with some applications happily storing data (the camera, for instance) and others failing to accomplish, well, anything. 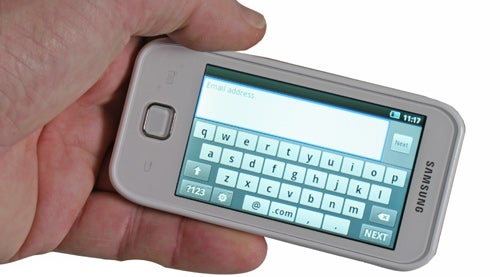 We’re sorry to say it, but can’t remember a single time we tested a product this fundamentally broken. So far as we can tell the major problems are all in software, so could be fixed with updates, but even were the Galaxy Player 50’s software working perfectly, we still couldn’t see ourselves not waiting until we could afford the extra money for an iPod touch or the Samsung Player YP-GB1 arrives .


The Samsung Galaxy Player 50 has the makings of a decent android-based media player. However, even without the software issues, the hardware would still be too expensive compared to the much, much better iPod touch.