The Samsung Galaxy Note Pro 12.2 has a 12.2-inch screen, as its name suggests. It’s a big, bright, widescreen display that offers a much larger video-watching, reading and drawing space than any previous Note tablet or phone. 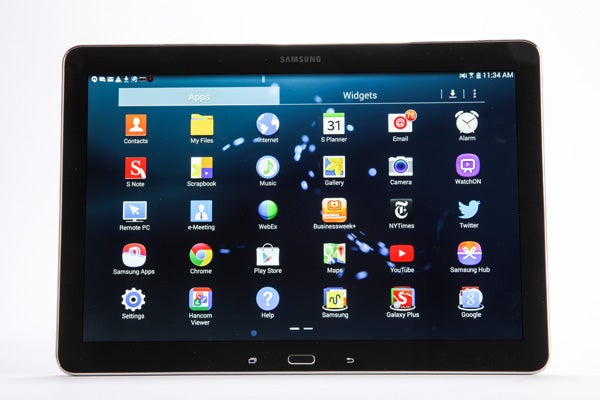 Despite a solid screen resolution, the Samsung Galaxy Note Pro 12.2 doesn’t offer that strong an impression of sharpness. It’s because of the kind of subpixel array used in the screen.

Rather than using uniform rows of red, green and blue pixels, the Samsung Galaxy Note Pro 12.2 has rows of red, green, blue and white pixels. It increases power efficiency, but dramatically decreases how sharp a screen appears. It’s down to the uniformity of the rows of pixels – consecutive rows are shunted by a subpixel, causing straight lines to look fuzzy. It also has a patterning effect on block colour/white areas. 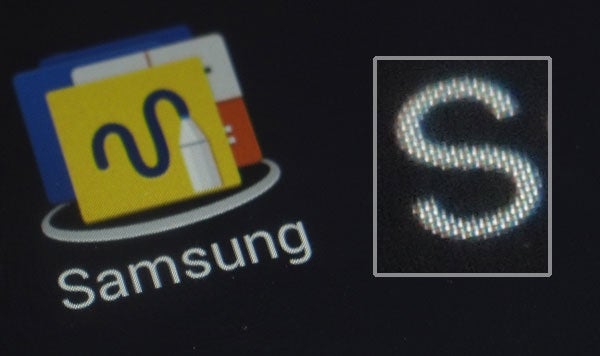 This pixel arrangement is part of the PenTile family, and it lets the Samsung Galaxy Note Pro 12.2 increase brightness with less power consumption than rival RGB screens. And top brightness is indeed pretty searing. Whether you prefer the pure image quality of RGB (as seen in the iPad Air) or better efficiency is down to your own taste. But we’d opt for image quality every time – especially in a tablet with design/arty potential like this.

We saw this symptom in the Note 10.1 2014 Edition and didn’t see it as a big problem, but here the lower pixel density makes it more apparent.

The backlight in our review sample is also inconsistent. In a darkened room it’s extremely clear where the side-firing LEDs that light the screen live, and when viewed from certain angles, the screen greys as the backlight’s ‘separate’ presence becomes all too obvious.

This is a good screen, but ultimately we’re a little disappointed. We wanted a great one – and we deserve one for £650.

Another important feature for the home tablet is speakers. The Samsung
Galaxy Note Pro 12.2 makes a good start with stereo speakers – there’s a
driver on each end.

Side-firing drivers give a distinct stereo
image when the tablet is held out in front of you. However, the sound
quality isn’t particularly remarkable. Like most tablet speakers that
haven’t had some serious work put into them, they sound a little thin
and lacks the lower-end warmth and power that makes a speaker more
enjoyable to listen to.

As well as having a larger screen than any other Note tablet, the Samsung Galaxy Note Pro 12.2 tries harder to make its screen inches work for you.

Some of basic interface tweaks include reworking the Android home screens layout in order to make better use of space. The Google Search bar is sensibly relegated to a small corner of the bottom-left rather than taking up the whole length of the screen, and there’s no persistent app shortcut bar. Samsung has made the Samsung Galaxy Note Pro 12.2’s home screens into zones that are as customisable as possible, rather than plastering each with everyday ‘essentials’. It’s a sensible choice. 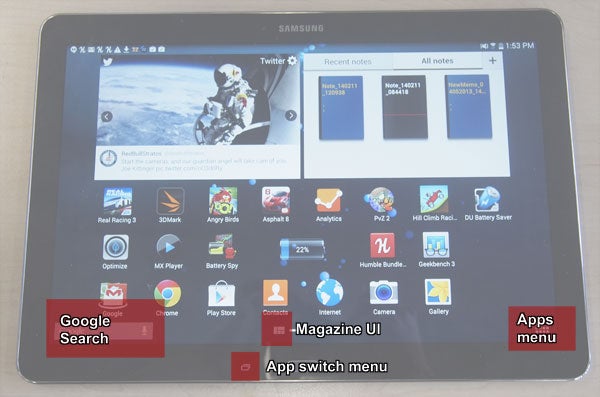 The Samsung Galaxy Note Pro 12.2’s multi-tasking skills are more attention-grabbing, though. In the other Note phones and tablets, a feature called Multi Window lets you open two apps at once on-screen. With this tablet you can open four.

Not all apps can be opened in Multi Window, but most the basics can – the browser, email, YouTube, S Note and more. Some third-party apps work, but it is a case of hit and miss. 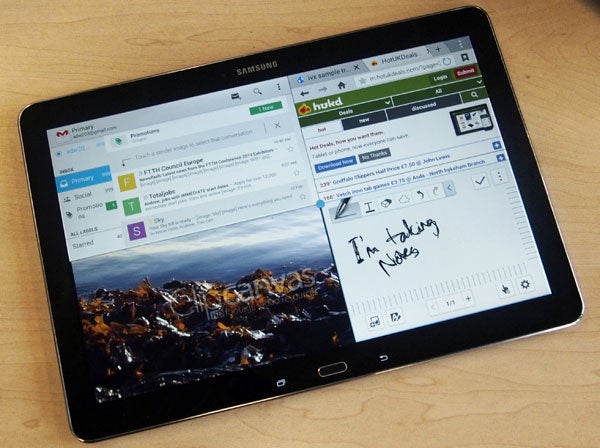 These apps are then scaled to the size of the window, and you can also choose how much room each gets. It works remarkably well – and is very usable. Forgetting the coding wizardry needed to make this work for a second, it’s not that surprising. Each quarter of the display is roughly equivalent to a 720p display in resolution, and the 12.2-inch work surface offers plenty of space.

The only issue is finding a use for this sort of multitasking. A classic quartet might be the browser, a video player (MX Player works with Multi Window as well as the default player), your Gmail and S Note, a note-taking app. Why? Use your imagination.

This sort of intensive use is a bit at odds with the more relaxed way most of us use our tablets. But Samsung has successfully taken tablet use to the next level with the Note 12.2, if that’s what you’re after.

The Samsung Galaxy Note Pro 12.2 also offers a slightly more casual way to use multi-tasking. Using the stylus and a feature called Pen Window, you can draw a box on the screen and load up most Multi Window-compatible app in it. This has uses that are a little less of a tablet stretch than quad-add multitasking. You could, for example, look up a game walkthrough online while playing a game or bring up your email while watching a video.