Where we’re keen on Samsung doing its best to get the most out of something is with the S Pen stylus. A few crucial ‘right moves’ make the stylus a great asset rather than a naff add-on. They’re pretty much the same as Samsung’s other Note products, so we’ll be brief:

The S Pen is a great piece of hardware, and one of the few things that sets Samsung’s tablet line-up apart from the rest. This particular tablet doesn’t introduce many brand new stylus software features, but the current bunch is pretty good regardless.

The stylus can be used wherever you need to input text, as the Samsung Galaxy Note Pro 12.2’s custom keyboard has a separate OCR mode that lets you write – rather than tap. It’s generally slower than typing with your thumbs, but character recognition works quite well unless you have truly terrible handwriting. 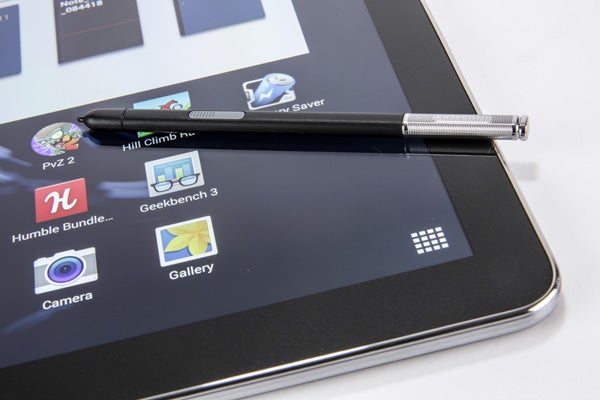 When not handwriting, Air Command is the main way to access S Pen features. It pops up when you hover the S Pen over the screen an inch or closer and press the button on the pen itself.

Functions on this radial menu include partial screengrabs, writing notes on the screen, the universal search and two more interesting ones – Action Memo and Pen Window. 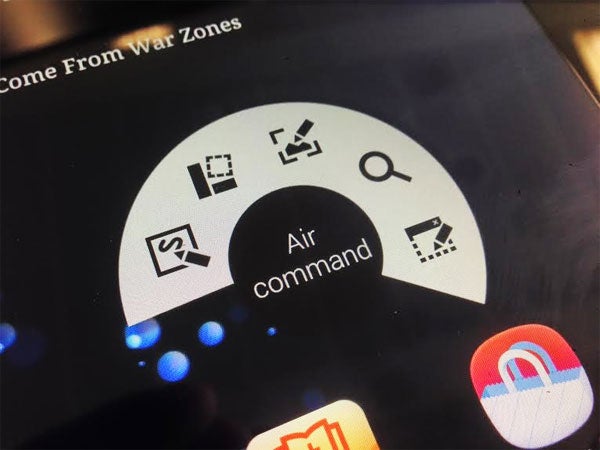 Action Memo gives you a post-it sized scrap of note paper. Write something on it and it’ll be OCR’d into standard text that you search the web with it or email to someone.

Pen Window is a multi-tasking feature we referenced earlier. You draw a Window on the screen and can then run a mini version of a core app within it – a browser window, a calculator, video player or your email being obvious examples.

These extra stylus bits turn the S Pen from a stick into a tool. 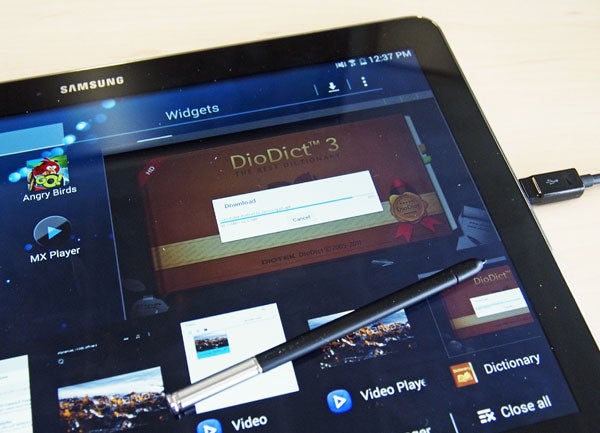 However, it’s also useful as simply another way to navigate around the Samsung Galaxy Note Pro 12.2. For the most part it works just like a finger when prodded on items – it can flick through menus, run apps, be used to play games and so on.

There are also a few stylus-optimised apps included. The most important are S Note, the versatile note-taking app that can even be made to sketch out presentations, and SketchBook Pro. This is a fantastic drawing app that shows off the stylus’s benefits for creative types. It supports pressure sensitivity, Photoshop-style layers and plenty of brush customisation. It’s one of the Samsung Galaxy Note Pro 12.2’s best apps.

All this was true of the Galaxy Note 10.1 2014 Edition. However, that tablet was beset with performance issues at launch that we haven’t experienced with the Note Pro 12.2.

Performance is pretty great generally, with little lag and plenty of power on tap. The Samsung Galaxy Note Pro 12.2 version we’re reviewing uses the Octo core Samsung Exynos 5420, clocked at 1.9GHz. This is the chip used in the Wi-Fi only version of the tablet. The 4G version uses the Qualcomm Snapdragon 800 instead.

They’re fairly evenly-matched processors, and both version of the tablet have 3GB of RAM. This is the most seen in any mainstream Android tablet or phone, as of February 2014.

In the Geekbench performance test, the Samsung Galaxy Note Pro 12.2 scores 2,712 points. That’s roughly on-par with the fastest Snapdragon 800 tablets and phones. It has enough power to play top-end Android games. However, you will find that not all games are optimised for the tablet’s super-high resolution screen. Real Racing 3 looks blockier than you might expect, for example.

Still, that is not Samsung’s fault.