The S Pen remains the Note’s biggest selling point. The Wacom-powered stylus is something the competition can’t match. The S Pen is now Bluetooth enabled, and comes in a few different colours. For example, the Ocean Blue Note 9 comes with a yellow S Pen, while the black and lavender handsets sport colour-matched S Pens.

In use the S Pen is as good as ever – it’s fluid, smooth and uber-responsive. There’s almost no lag when you’re writing, and the fantastic palm-rejection software means you can write naturally without accidentally drawing over other parts of the display. 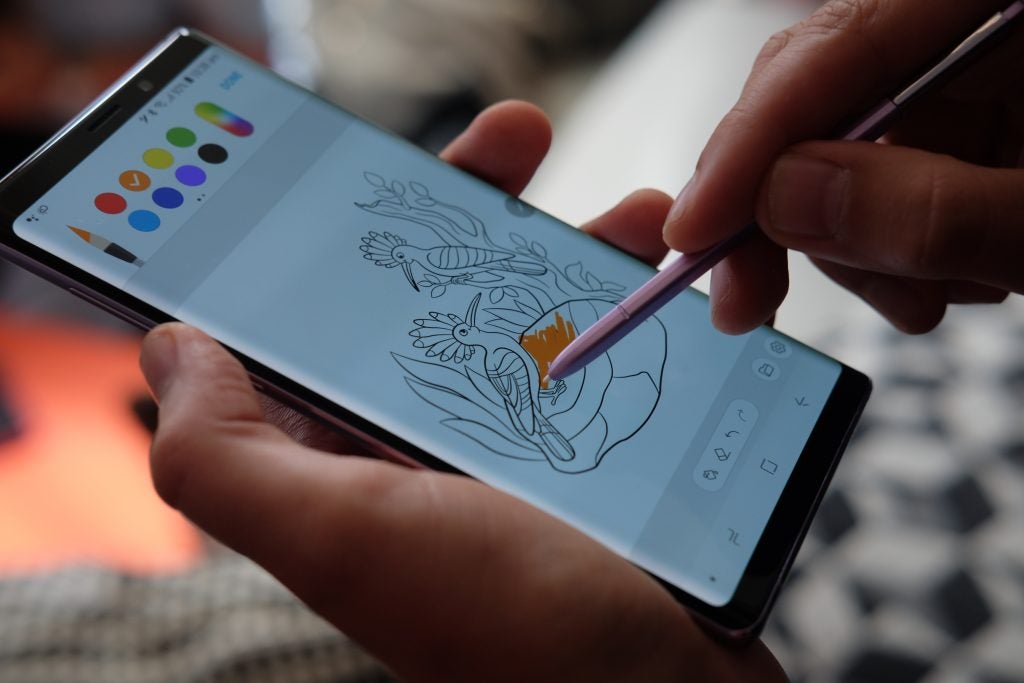 Bluetooth is the biggest addition to the S Pen here, and it’s a perfectly serviceable addition that I have barely used.  Having Bluetooth lets you perform functions with the pen when it’s further away from the device, for instance you can use it as a shutter button when taking selfies or skipping tracks. It’s a nice idea sure, but in reality I have never found myself away from the phone with the S Pen in hand.

My favourite S Pen feature remains screen-off memo. With the display off you can pop out the pen and immediately start note-taking. Slide the pen back in and the note saves itself. It’s a slick process that is genuinely useful.

Samsung includes a couple of S Pen focused apps on the handset – with Notes being the highest profile. It’s an okay app, but I always revert to the stylus support in Google’s Keep, thanks to its online syncing.

Internally, the Samsung Galaxy Note 9 is very similar to the Galaxy S9 Plus – which has been on the market since March.

My review unit packs the Exynos 9810, 6GB of RAM and 128GB of storage. This is the European model, so if you’re in the US then your unit will be powered by the more common Snapdragon 845. Since I haven’t used that particular version (or the 512GB model with 8GB RAM), all my comments regarding performance are based on my experience with the Exynos variant.

Even though the Note 9 isn’t the first handset to be released with these specs, they’re still pretty much up there with the best you’ll find in any device currently on the market.

I always find performance very hard to judge on Samsung phones. They’re always lightning fast when first set up, but the performance drop-off feels harsher and quicker than other phones. This was certainly the case the Galaxy S8 and the Note 8, both of which were powered by the Exynos 8895.

However, I have had a much better experience with the Samsung Galaxy S9 since its release. Performance on the unit has stayed very strong even after around 6 months of consistent use. Considering both that and the Galaxy Note 9 use the same Exynos 9810 SoC I am a lot more confident in saying that performance should stay stable here.

Out of the box, the Samsung Galaxy Note 9 is a joy to use. The lag that dominated Samsung’s software in previous years has been banished, replaced by a smooth UI that reacts instantly to your every swipe and tap. 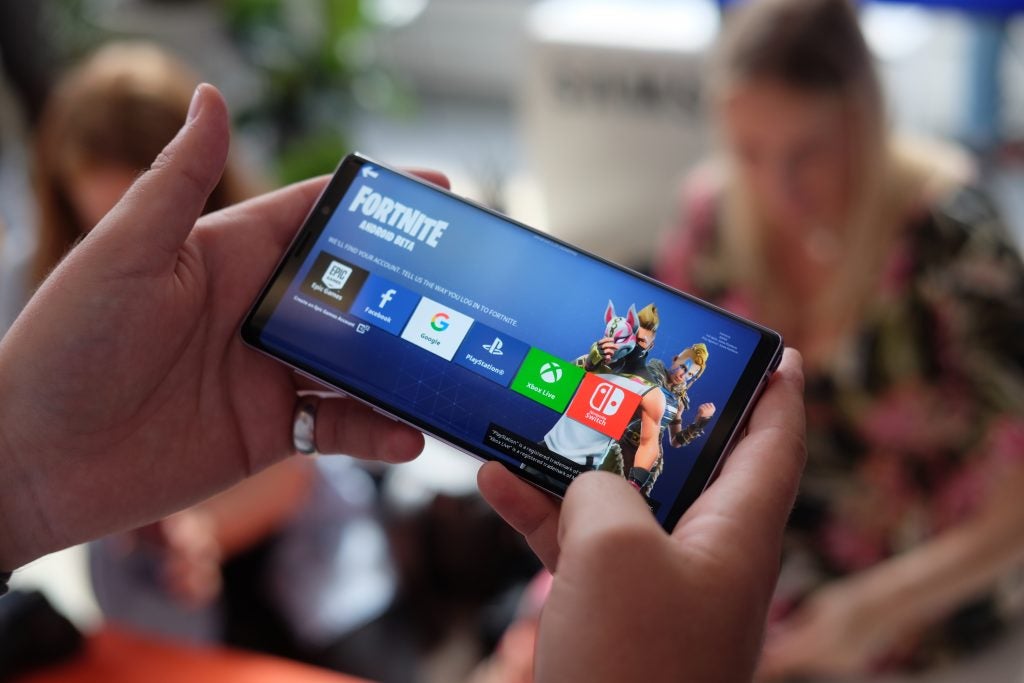 Excellent performance carries over to gaming, too. Samsung played up the gaming prowess of the Note 9 during its launch by partnering with Epic Games and having the Note 9 serve as the first demo of Fortnite on Android.

You can install Fortnite on many more Android phones now, although on the Note 9 there’s a pre-installed installer that makes the process easier. Not being a Fortnite Pro (actually, this was the first time I’d ever played it) I was terrible, but the phone’s performance was impressive. My only concern with gaming is that the curved edges of the display did make it harder to accurately hit the on-screen controls.

If you’re interested in how the Note 9 scores in synthetic benchmark tests, check out the tables below. 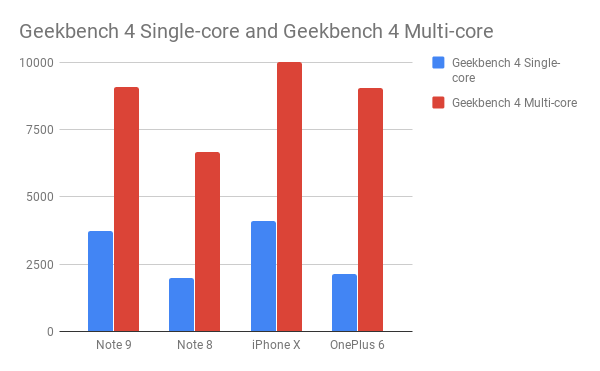 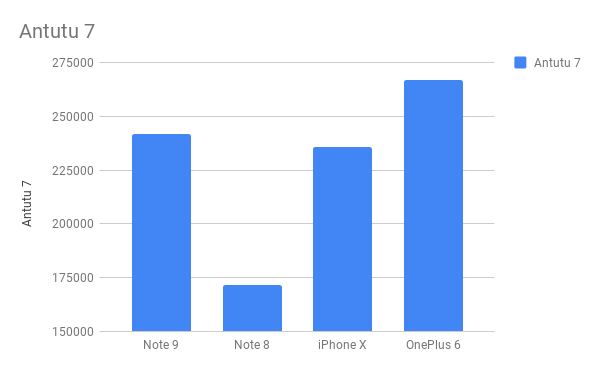 Excellent performance extends to other areas of the phone. Both Wi-Fi and 4G reception were noticeably better than the iPhone X I was using for comparison. I was achieving faster speeds from both my home router and on my usual Three UK SIM-card.

Storage isn’t only plentiful, it’s pretty much unbeatable. You can choose between a 128GB or 512GB model, both of which also support up to a 512GB microSD too.

A slightly weaker area is audio. There’s one speaker in the ear-piece at the top, and one sitting next to the S Pen on the bottom. They sound fine, but for a phone of this size a wider soundstage and a bit more bass would have been welcome. In addition, the Dolby Atmos mode does very little. At least there’s room for a headphone jack, plus you get a pair of in-ear AKG headphones in the box.

The improvements Samsung has made to the exterior design of its handsets over the past couple of years have been clear and obvious. However, its improvements to the software are just as important.

The once derided TouchWiz, now referred to as ‘Samsung Experience’, is amongst the better Android skins around thanks to serious depth and a nice design. It’s about as far away as you can get from Google’s vision of Android, but in many ways it does things better.

Swiping up from the homescreen to view your apps and down to your notifications is fluid and natural, while icons and widgets fit very much with the aesthetic of the phone.

Where Samsung really impresses is in the sheer amount of customisation options. I love being able to alter the screen resolution to save power, as well as being able to turn on the performance mode to stop extraneous processes when gaming. Samsung’s multitasking is the best in the business too: you can pop out videos from supported apps, minimise apps into floating windows and even set up handy shortcuts that will open two apps simultaneously.

Samsung’s battery saver modes are great, with multiple options for customising areas that affect usage. For instance, you can tweak by how much it lowers the brightness, throttle the CPU speed, or temper background data usage. It also tells you how much extra juice you’ll gain by enabling these modes – perfect, if you’re trying to stretch the battery life out over, say, a weekend camping.

Biometric security is common on just about every device in 2018. While Apple has gone all in with facial recognition, Samsung is more open to other methods. There’s the fingerprint sensor on the rear of the Note 9, plus an iris scanner on the front; a more rudimentary facial unlocking system is in the mix too. 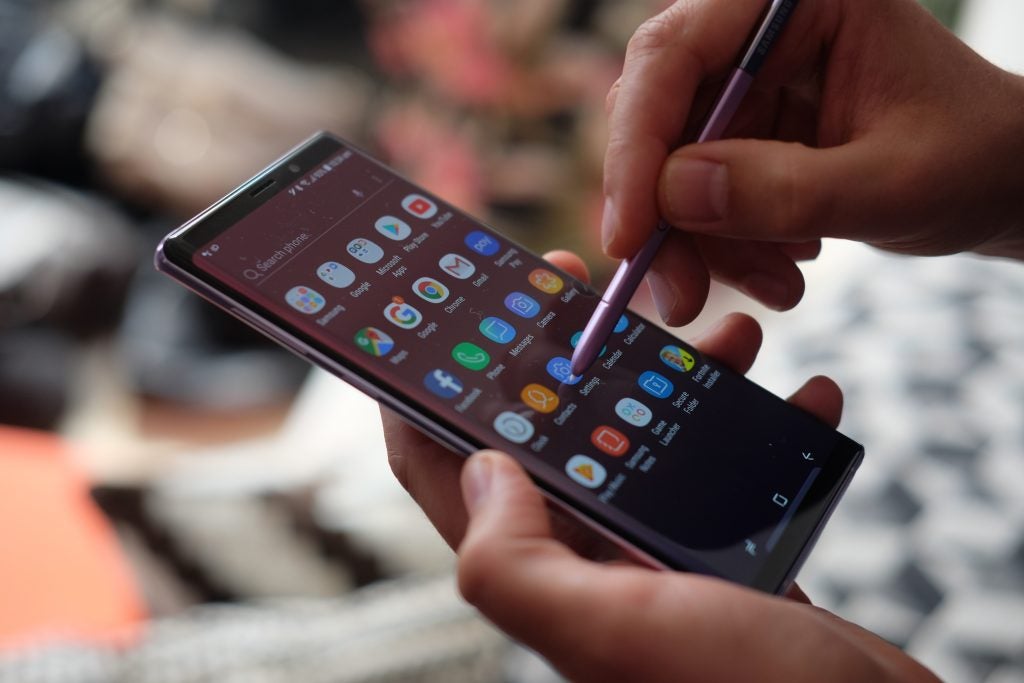 For me, the fingerprint method remains the best here. While iris scanning is cool and has a futuristic whiff about it, it’s slow and requires a bright red light to burst from the phone every time it’s initiated. Fingerprint unlock remains the only way to authenticate Google Play purchases and unlock certain apps, so it’s wise to enable this even if you’re going to mainly use other methods to access your device.

The area that Samsung appears to be a step behind much of the competition is gesture control and navigation. I love navigating the iPhone X through a series of swipes, and it works very well on other devices such as the OnePlus 6 and Huawei P20, too. Samsung seems reluctant to add anything similar, meaning you’re stuck with the usual three Android soft-keys constantly visible.

It will be interesting to see how Samsung deals with the Android Pie update, which brings a new method for navigation and multitasking. How soon Pie will arrive on the Note 9 remains a mystery, however.

Samsung’s biggest issue with its software remains just how many duplicate apps you’ll find here. Samsung clearly wants you to forget Google’s own apps exists, as it has created its own version for just about all of them. There’s two browsers, email clients, app stores, clocks, calculators and payment services. It’s a mess and a pain to sort out.

You’ve also got two voice assistants: Bixby and Google Assistant. Bixby has seen some visible improvements in this version 2, but there’s still so much going on and it doesn’t manage any of it very well. So much so that I end up switching it off completely, relying on the far superior Google Assistant instead.

Bixby’s problem is that even basic requests, such as asking for a weather update or for a timer to be set, are often misheard and performed incorrectly.