The S Pen stylus is the main reason for the Samsung Note series to exist. Without one, the Galaxy Note 8.0 would be nothing more than a jumped-up Tab – Samsung’s series of ‘standard’ Android tablets. And it slots into the bottom-right edge of the tablet.

It’s much smarter than the sort of stylus that can be bought as an accessory for any tablet, too, as it doesn’t interface with the same part of the screen that your finger ‘talks to’ when prodding the touchscreen. 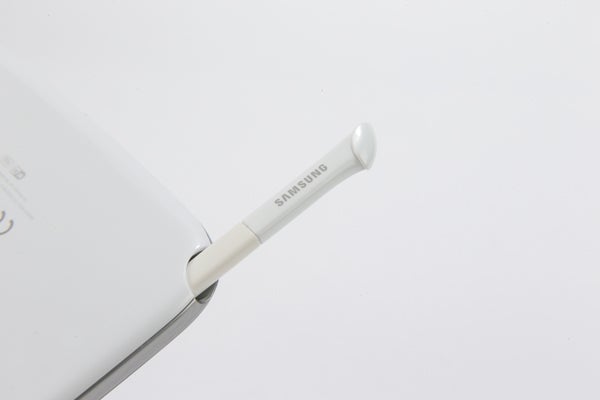 Instead, there’s a separate digitiser layer in the Note 8.0’s screen that lets the tablet sense the pen before it gets near the screen, and lets you apply subtly differentiate levels of pressure – useful when drawing pictures, for example. It even has mouse-like buttons for activating specific features.

It gives a much more natural-feeling writing and drawing experience than the dummy styluses you might buy for another type of tablet. And it doesn’t need batteries, either.

The clever bits don’t end there, as the Galaxy Note 8.0 disables the capacitive touchscreen when you’re using the pen, so resting your hand on the screen doesn’t send the cursor haywire. The tech side of things works perfectly.

But its let down somewhat by the paucity of apps make full use of the S Pen stylus’s abilities – pressure sensitivity being the one we miss most.

Being part of a Samsung dynasty does earn the Note 8.0 a few favours, though. There are apps that have been specially optimised for the Note family, and they cover the most obvious bases – drawing and note-taking, specifically.

As the Note 8.0’s key feature, the limited software support is crucial. If all you’ve ever wanted is a digital notepad then the Note 8.0 delivers, but the integration feels skin deep rather than all-encompassing.

Perhaps the most important of all S Pen apps is one that comes pre-installed – Samsung’s own S Note. It’s a breezy and fun note-taking app that makes good use of the stylus.

Although it’s accessible in style, it’s designed to let you make all sorts of documents, from scribbles to presentations and magazine-style articles. That said, most people will likely use it for casual scrawls to be deciphered at a later date. 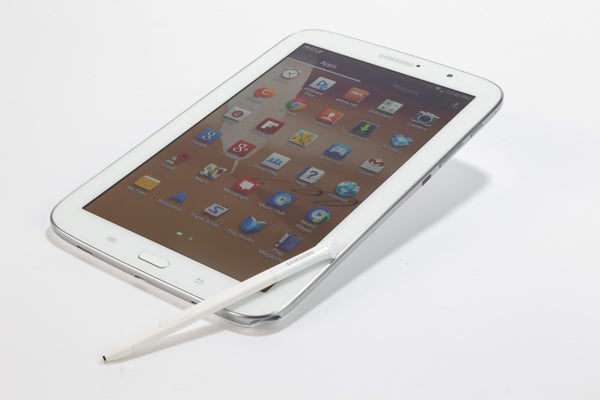 Those looking for an app to help them unleash their inner Van Gogh will have to look elsewhere. Art app Paper Artist comes pre-installed, but it’s far too frothy to be of interest to anyone over the age of five. A quick search revealed the nifty (and rather good) Zen Brush, though, and Samsung offers other suggestions on its website.

Unlike Samsung’s Tab-series tablets, the Galaxy Note 8.0 has a largely non-proprietary USB port rather than a bespoke one. We say ‘largely’ non-proprietary because the port also supports the MHL standard, which lets you send HD video and surround sound audio from the socket to a TV (via HDMI) with the right adapter. Just like with Apple iPad’s, however, none is provided. 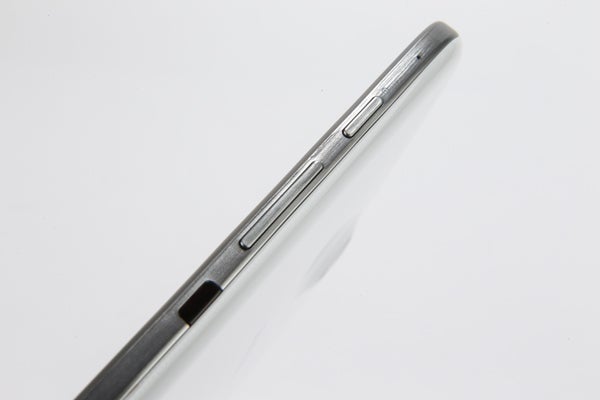 The IR blaster sits below the volume rocker.

Another neat connectivity extra is the IR blaster, which sits on the Galaxy Note 8.0’s right edge next to the volume rocker. This is becoming an increasingly common feature in Android devices, and lets a phone or tablet replace a remote control, perhaps for a TV. An app to bridge the gap between the two comes pre-installed too, called Peel Remote.

One thing you don’t get is Near Field Communication (NFC) built-in. It’s a little surprising Samsung has left the feature out here, as it has seems keen to promote it – developing its own NFC-powered S Beam file-sharing app. However, NFC didn’t feature in the Galaxy Note 10.1 either, perhaps the Note 8.0’s closest relative.

Wi-Fi and Bluetooth are built-in, too, and while we’re reviewing the Wi-Fi version, 3G/4G versions are available.