Samsung’s approach to Android has never been universally loved. But it feels like it’s finally taking a step in the right direction and has started cutting the amount of bloatware it loads onto smartphones.

With the Note 5, you’re getting Android 5.1.1 Lollipop with Samsung’s TouchWiz UI overlaid on top. With Samsung’s track record of getting new Android updates rolled out, I wouldn’t hold my breath that Android Marshmallow will arrive on the Note 5 before the end of 2015.

As it stands though, the Note 5 follows in the footsteps of Samsung’s other flagships. Take that bloatware situation for instance. Aside from the generally very polished native apps Galaxy Life (Think Xperia Lounge on Sony phones) and the Galaxy App store are the only Samsung apps that make their way onto the Note 5. Generally, the Note 5 does a good job of packing things in folders like tools and Google apps. Microsoft’s suite apps including Word, OneDrive and Skype are also organised keeping the app drawer clutter-free.

Outside of the app drawer, you do still have the Flipboard support by swiping all the way right. Samsung clearly can’t resist at least having on home screen widget in the attempt to lure you into the Galaxy realms, but it’s a bin dumping away. Aside from that, there’s the shortcuts to the core S Pen features as well. Again, you can dump that as well. Aside from that, there’s not really much new. The app icons have a curvier look and all the same settings and options are largely in tow.

Aside from that, there’s nothing really out of the ordinary. Google Now is still activated from the home button and the notification tray combines the best elements of Samsung’s own TouchWiz UI and Android Lollipop. You still get the multitasking feature that was present on the Note 4 and there’s some modes that simplify the UI. I have to confess I am a big fan of the new background themes as well, especially the Space one. But that’s not a feature that’s unique to the Note 5. 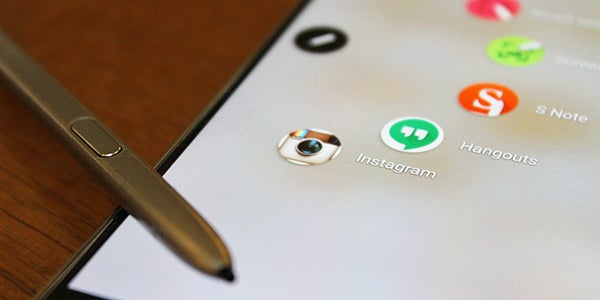 As for the S Pen, it doesn’t feel like a radically different writing experience than it was on the Note 4. Samsung claims the Wacom-powered S Pen is more accurate and offers improved response but that’s not something I noticed. It’s still built for small note-taking and making annotations, not writing full blown articles or diary entries – largely because there’s not enough room to make that comfortable to do.

There’s some changes in the UI and the features department though that should come as welcome additions for S Pen users. When you pop the S Pen out of its compartment and press down on the S Pen’s solitary button just above the screen, you’ll activate the new Air Command. This is a redesigned menu system, that groups together optimized Note features. These include Action memo, Smart select, Screen write and a slightly redesigned S Note. There’s also a few settings tucked away in the bottom corner that let you add a floating icon that sits permanently on the screen, but I found it a nuisance more than anything. 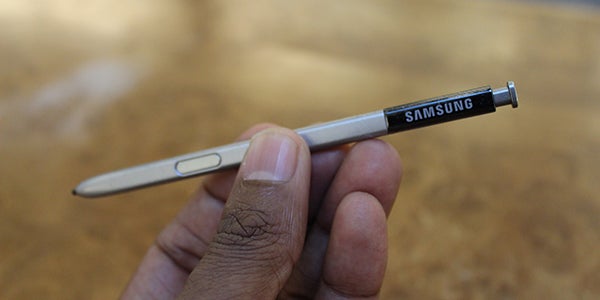 Another new feature is the ability to take notes on the screen when it’s turned off. Unfortunately, I didn’t have any luck getting it to work. It has to be activated in the S Pen section in the main phone settings, but despite numerous attempts, it just didn’t happen.

Other useful additions include the ability to write, edit and annotate PDF files. Taking screenshots has improved as well letting you capture the entire page of an email instead of the section currently in view.

While changes are not wholesale, I’m sure S Pen fans will appreciate the changes and the Note 5 remains the phone to use if you want to break away from typing with your fingers. 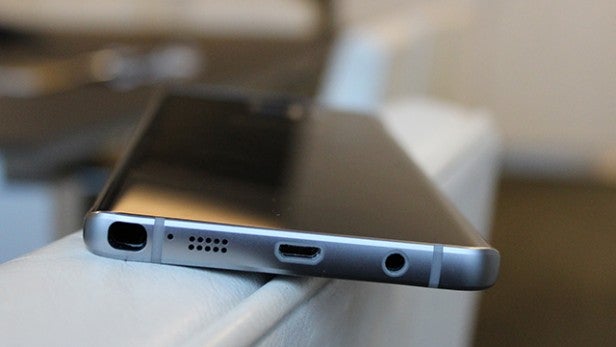 If there’s one thing you don’t need to worry about it’s the Note 5’s overall performance. Samsung employs the same custom-built Exynos 7420 octa-core processor with the new 14nm manufacturing process to improve efficiency. There’s also a 4GB RAM, which is 1GB more than the S6 and the S6 Edge is packing. Bottom line, the Note runs slick, speedy and I didn’t encounter any issues using it.

From swiping through homescreens, launching apps and more intensive tasks like gaming, it’s up there with the best. That extra 1GB of RAM also helps on the multitasking front.

On the graphics front, the Note 5 packs a Mali-T760 MP8 GPU. Running our go-to game Real Racing 3, it handles the graphically demanding title with ease. There’s no lag or framerate issues, just like the rest of the Samsung flagship family.

The benchmark scores back up the impressive performance putting it on par with the S6, S6 Edge and Edge Plus, which you can see below. In the Geekbench 3 multi-core score it’s on parity with the S6 Edge Plus (5,014). It also scores an impressive 6,3485 in AnTuTu’s Benchmark v5.7.1 test.