The Note 5 has a smaller battery than the Note 4. Now there’s a 3,000mAh battery down from the 3,200mAh on in the Note 4. It’s also enclosed in that glass back giving loyal Note users another reason to shake their collective fists at the Korean company for dropping one of the Note’s key features. Samsung’s worked to make up for this via wireless charging and improved turbo charging.

I found the Note 5’s battery performance is very similar to the S6’s. It will get you a day and a half on average with general use, which is about the same as the Note 4 and about the same as the iPhone 6S Plus. That’s without tapping into one of the two power saving modes now available on the Note 5. The Ultra Power Saving mode has been moved to the Battery section in the settings menu. A new Power Saving mode takes its place in the Toolbar in the notification tray. It doesn’t offer the same greyscale mode, instead focusing on elements like limiting maximum CPU performance, reducing screen brightness and disabling Vibration feedback. 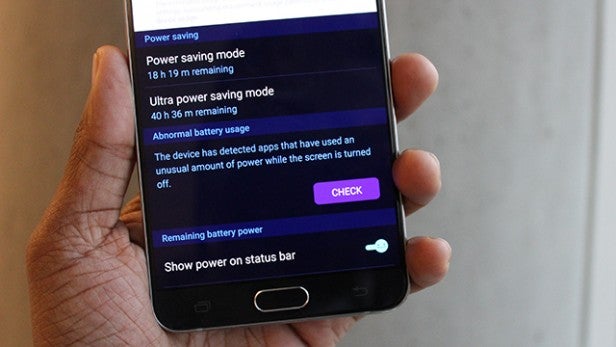 There’s more though. An abnormal battery usage feature detects apps that are using an unusual amount of power when the phone is turned off. In my case it was Runkeeper. The gave me a percentage how much battery the battery was consuming and the option to force stop the application.

When you’re watching video, the battery drop-off is not as severe as you’d imagine it would be. I streamed an episode of House of Cards on Netflix with the battery at 100% and the screen brightness at about 75% of the maximum setting. That’s what I consider an acceptable viewing brightness on the Note 5. By the time the episode finished, the battery reading was 90%, which is impressive when you consider there’s a hulking power-sapping QHD screen involved here.

It was a similar story when I took it out running making use of the GPS. As the screenshot from the Battery HD illustrates, I went out running for a couple of hours using the Runkeeper app and Spotify playing music in offline mode and the battery drop off wasn’t severe as I anticipated. 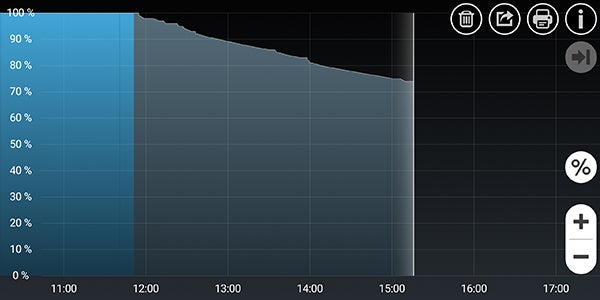 It’s a slightly different story for more routine tasks like simply checking in on Twitter or browsing where the drop-off appears more apparent. So what’s the explanation for such an impressive battery performance even with the drop in capacity? I can only think that it has something to do with Samsung’s own custom-built processor. The Korean company now uses a 14nm Exynos processor, down from the 20nm in last year’s models. The changes in design aim to create a more power efficient performance and it clearly helps with more intensive tasks.

When you do run out battery life, you do have a pretty impressive turbo charging mode. This only works with the charger Samsung supplies in the box and will power your phone up noticeably quicker than it does from a standard micro USB charger or wireless charging. When my Note 5 died, after 10 minutes of charge it was back up to 20%. After 25 minutes, it was just below 50%. After just over an hour it was back to 100%. It’s clear the initial stage of the charge is much quicker than the end part. That means it’s the ideal solution when you need a quick charge in the morning.

Don’t expect marvels from call quality on the Note 5. Having lived with a Note 4 for a while now, there’s not a massive upsurge in overall performance. It’s loud, clarity is strong but not best in class. I’d still say that Sony and HTC’s flagships continue to shine in this department. I didn’t experience any drop outs during conversations and the other person on the line didn’t have any issues hearing my side of the conversation.

It employs the same secondary microphone setup as its predecessor to help noise cancelling in loud environments and it works as advertised. There’s also an additional volume mode if calls are sounding a little on the quiet side. But that does mean you sacrifice some of the finesse and the detail in the calls.

Unfortunately, it’s a similar story with the speaker. The solitary speaker has moved from the back of the phone to the bottom edge next to the micro USB charging port just as it is on the Galaxy S6. It’s not the worst offender when you’re listening out loud, but it could be so much better. It’s offers about the same volume as the Note 4, but has a similar sound profile. There’s just enough warmth breaking out with enough detail and finesse to sit through a YouTube video or two. If you’re watching a film though, I’d suggest plugging in a pair of headphones. 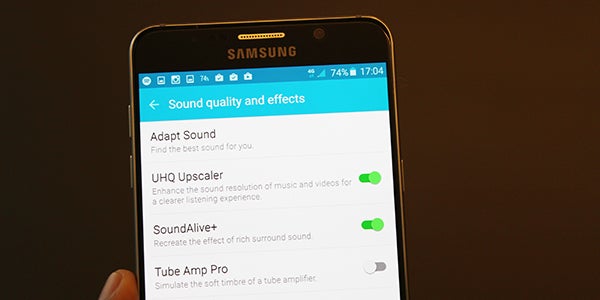 On the subject of headphones, Samsung includes a pair of its clearly Apple-inspired in-ears. They have the same white hue but do include two pairs of silicone rubber ear cushions for a comfortable fit. You won’t want to go running with them but they’re not a terrible sounding pair of in-ears. You don’t get exceptional levels of detail and bass response is adequate. But they’re not so muddy sounding that you wouldn’t want to wear them.

Samsung includes a handful of modes to improve sound quality and give you more control of how video and music sounds like through a pair of headphones. The Adapt Sound let’s you create a sound profile that’s better suited to your ears. It uses a series of beeping tests where you need to confirm whether you can hear them or not. This then creates a sound profile. In my case my left ear was apparently used more frequently. I can’t say I really noticed a major difference.

It was a similar story with the UHQ Upscaler mode, which apparently enhances the sound resolution increasing the clarity and detail through wired and wireless Bluetooth headphone listening. I didn’t notice a discernible upsurge in sound quality. I did however have more luck with the SoundAlive+ and Tube Amp Pro features that do add a nice touch of warmth and widen the soundstage a little to offer a richer experience. It certainly works better with more expensive headphones than the ones slung into the box with the Note 5.

Should I buy the Note 5?

This is a difficult one. If you live in the UK, then you’re not going to go into a shop and pick one up because Samsung is pushing the Galaxy S6 Edge Plus as the bigger alternative to the S6 and the S6 Edge. But that doesn’t mean there isn’t other means to get hold of one.

If you’re a loyal Note fan and already own the Note 4, then I would personally wait until the next instalment unless you really like the look of the sleeker, S6-inspired design. You will have to live without the microSD card slot and non-removable battery – two key features that made the Note series so desirable. Along with the S Pen of course.

Note 3 users might find more reason to upgrade, particularly in the screen, camera and performance department. The battery performance is vastly improved in comparison to the older Note as well. But again, it really depends on how much you value those core Note features Samsung has decided to ditch. 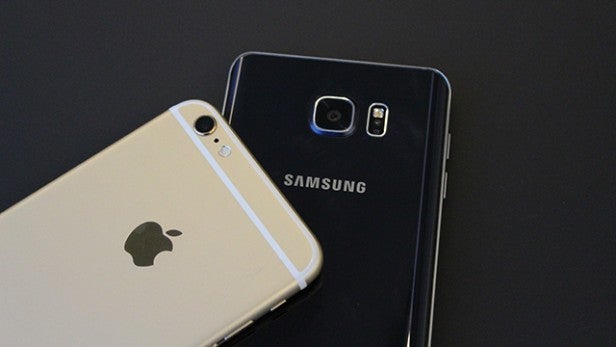 So how does it compare in price with Samsung’s other flagships? Well, it’s not as expensive as the Note 4 at launch, which cost £619 SIM-free. A 32GB Note 5 can be picked up online for around £450. To put that into perspective, the Galaxy S6 (32GB) is currently available SIM-free at Carphone Warehouse for £450. The Note 5 is basically a bigger S6 with a larger battery, more RAM and the S Pen. A 32GB Galaxy S6 Edge will cost you £529 SIM-free and the S6 Edge Plus (32GB) is a massive £600.

Its nearest non-Samsung competitors are the LG G4, Sony Xperia Z5 Premium and the iPhone 6S Plus. The two Android phablets are more competitively priced with the Note 5 while the 6S Plus starts at £619 for the 16GB model. While I can’t comment on the Z5 Premium as I’ve had no time to use it, I have lived with the G4 and the 6S Plus, and the Note 5 is definitely an equal if not better big phone.

The Note 5 is one of the best phablets on the market, but it’s lost of some its uniqueness.