The Note runs on Android 4.4.4 KitKat with the TouchWiz UI overlay we’ve already seen on the Galaxy S5. Samsung has made some small tweaks and removed some clutter, such as the gestures that rarely get used and a few of the Samsung apps, but it has largely the same look and feel.

There’s still the same keyboard and multiple homescreens, now with a Flipboard-powered widget replacing the Magazine UX when you swipe all the way to the left. The Recent Apps feature has been redesigned, with apps now piled on top of each other so you can browse through like you’re flicking through files in a filing cabinet.

When you jump into the Settings menu, Samsung has swapped the dark background for a lighter one, and now arranges settings in a list instead of spreading them all across the screen, which did feel more overwhelming.

We definitely prefer the pared-down approach, especially when TouchWiz – alongside Sony’s Android treatment – can feel like the busiest flavour of Android to get around. We don’t really need loads of gestures and gimmicks that we’re not going to use on a day-to-day basis. 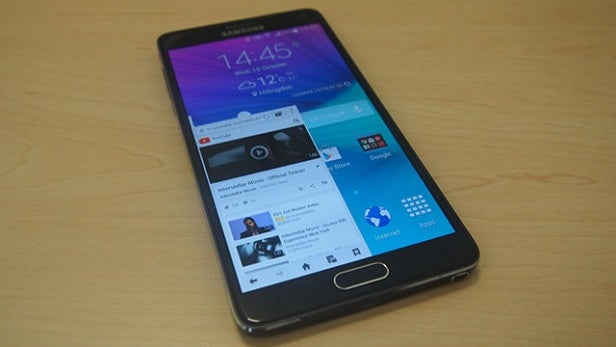 Multi-Window
One feature we do still like, and which works on a screen this size, is Multi-Window. This basically lets you run two apps at the same time, letting
you switch between the two without leaving the screen. Not all apps support Multi-Window, but the most useful, regularly used ones do, such as YouTube and the web browser.

You still need to turn it on in the settings and hit the capacitive Recent Apps button to select the apps you want to use. A nice new feature is the pop-up multi-window, which you can activate by swiping diagonally from the corner of an application. Then you’ll be able to move it around like a widget on the screen, while you carry on clearing up your homescreens or finish off some work. To close, you can simply press on the top of the window and you’ll get an X button appear.

It’s a shame you can’t resize the pop-up windows, but it strengthens what’s already a great multitasking feature.

As we’ve already mentioned, Samsung’s scaled back on its own bloatware apps, so out of the box there’s not so much sitting alongside Google’s own Chrome, Gmail, Maps, Google Play Music and the rest. There’s WatchOn to use the Note 4 as a remote via the built-in IR transmitter, plus Siri-rival S-Voice. S Translator and Knox app are notable omissions from the app drawer, although the latter is still supported.

One of the most interesting S apps is S Health. This is Samsung’s health and fitness hub, where you can store all of your data using the phone’s accelerometer to track steps and GPS support to map runs or cycling routes. It was pretty primitive and basic in its first iteration, but Samsung’s added a new coach mode that takes advantage of the new sensors packed into the Note 4 to record more data and create a more comprehensive picture of your day-to-day activity. 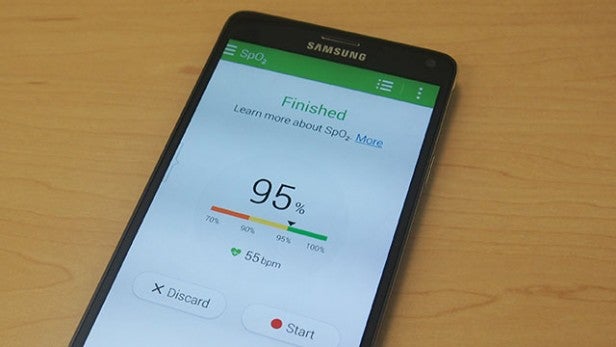 You can measure heart rate via the sensor on the back of the phone, which can also give you an indication of stress levels as well. The same sensor also has the ability to measure oxygen saturation levels in a similar way to the Withings Pulse O2 fitness tracker. This measures how much oxygen is in your blood, and can be an indication of how fit you are. A SpO2 reading between 95% and 100% is good and anything lower suggests you might not be in great shape. If you’re worried about going out and getting sunburnt, Samsung’s even included a UV monitor that works by pointing the rear-mounted sensor towards the sun.

The Note 4 features a 2.7GHz Snapdragon 805 processor with 3GB of RAM and an Adreno 420 GPU. That’s some pretty impressive specs and it’s no surprise to find that the Note 4 is well equipped for all that you can throw at it. 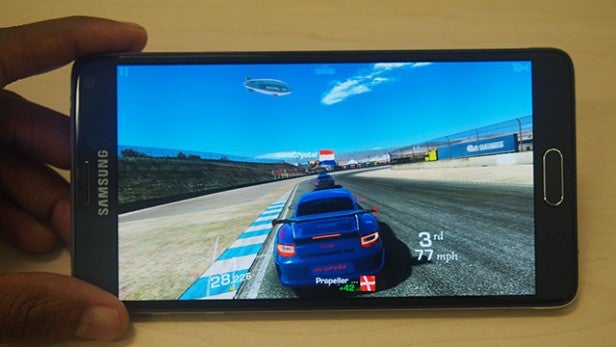 It also sees the introduction of the new Adreno 420 GPU, which Qualcomm has previously said is 40 per cent faster than the Adreno 330 GPU and ramps up the Note 4’s gaming prowess considerably. Running our test game, Real Racing 3, things not only ran smooth but the extra shadow and added visual sheen were more evident.

In the benchmark tests, the multi-core scores back up how much of a powerhouse device the Note 4 is. Its closest competition is another Samsung phone, and it even wipes the floor with the iPhone 6 Plus.

The S Pen is what separates the Note 4 from the rest. It’s not for everyone and most will likely ignore it, but for those who want to have an alternative method of input, this is arguably the best stylus experience you can currently get on a phone or tablet.

The S Pen itself might not look like it’s changed a great deal, but there’s some new things to make the Note-writing experience more accurate and useful. It’s roughly the same length and size as the one in the Note 3, and now Samsung has flipped the design so the bottom half has the grippier ribbed design and the smooth finish is on the top half.

You can still choose between plastic and rubber removable nibs, depending on whether you plan to do more drawing or writing. There’s a set of them supplied in the box, plus a little clip to help pull them out and swap them. You’ll still find the button at the end nearest the nib, which you press to fire up the S Pen launcher on the Note 4’s screen. 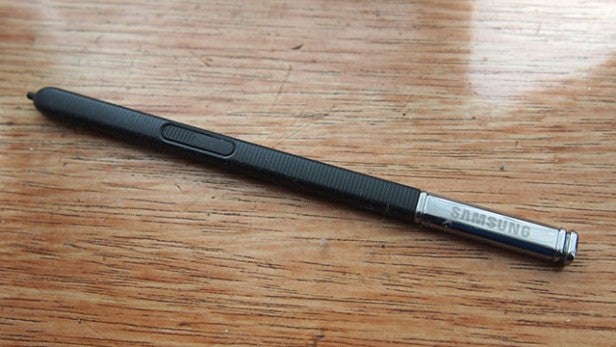 Pressure sensitivity, which is key to creating an accurate stylus experience, is now up to 2048dps, which basically means you’re getting the same kind of control and sensitivity as from a dedicated Wacom stylus – one of the best in the business. Spending some time with the Note 3 and Note 4 S Pens will give you an idea of the added finesse with writing. It’s more fluid, with better recognition of angles and swoops.

Just like you can on the Note 3, you can use the S Pen to navigate homescreens, write texts and emails, hover over icons to discover their functions, select and cut out images, and of course do some doodling. One of the nicest new features is the ability to use the S Pen to select copy within web pages where previously you had to cut them out.

Samsung has a bunch of specific modes it thinks will help you make more use of it. 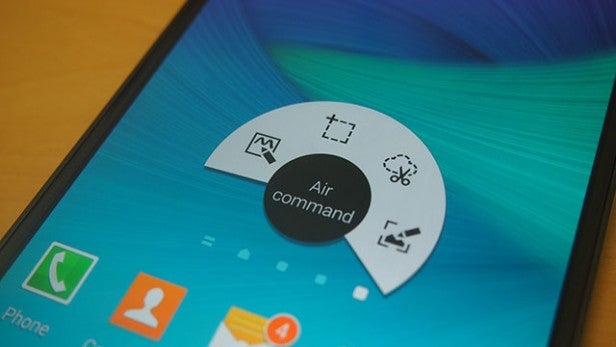 Action memo
As the name suggests, Action memo opens up a small notepad page where you can quickly jot down notes. By clicking the ‘link to action’ button you can share the note to a contact via text, email or even open the web browser to search for it.

Smart Select
One of the new S Pen features, Smart Select enables you to quickly crop out homescreens, web pages and pretty much anything else, collecting it in the Scrapbook album where you can build up a collage of items. This is definitely one for designers.

Image Clip
Similar to Smart Select, Image Clip uses the kind of magic wand tool you find in Adobe Photoshop, allowing you to quickly draw around an item to grab it and save it or add different crops.

Screen Write
With Screen Write the phone will automatically take a screen shot of whatever’s currently on the screen and then you’re free to make notes, draw diagrams and pretty much anything else you want to doodle on it, then save and share.

Samsung offers a handful of S Pen-optimised apps and they vary in terms of usefulness. You can find other apps on the Google Play Store that play nice with the Note 4’s S Pen, such as SketchBook X, but we’re disappointed Samsung hasn’t made a greater effort in its own Galaxy App Store to at least provide a section dedicated to S Pen-compatible applications. 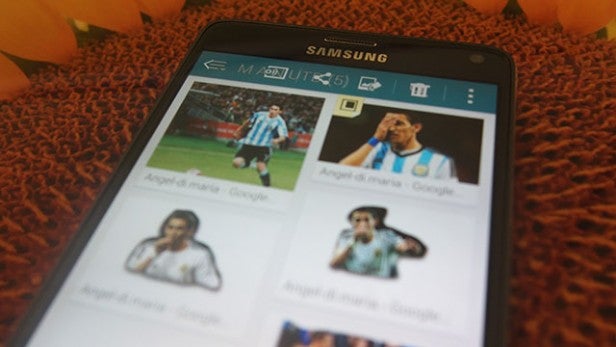 S Note is largely the same, although it now has an added Photo mode so you can add images to your notes. Scrapbook, as we mentioned previously, is a place for collating images, while S Planner will now let you handwrite entries – although we found that if you don’t write very neatly, it has issues accurately converting the handwritten text. Last up is PEN.UP, an Instagram-style social network for Note users to share images they’ve drawn. We didn’t really want to share our feeble efforts, though.