The Note 4 packs a 3220mAh battery, which is just slightly bigger than the 3000mAh one in the Note 3 that didn’t overwhelm us with its staying power.

Thankfully, despite a potentially power-sapping screen, the Note 4 really can go the distance. Prior to Samsung’s pre-release firmware update issued to improve performance, the Note 4 in general use – browsing, gaming, streaming music and checking in on Twitter and Facebook – dropped to 30% by 11pm, and that’s before tapping into power-saving modes. Post-update it was a whole lot better.

Using it in the same way and monitoring usage with the Battery HD Android app, during the same 8am-11pm time period, it was at 60% at 11pm and down to 20% the following day at the same time.

The Note 4 has the capability to keep going for two days with the ultra power-saving mode, which isn’t as restrictive as you probably think. 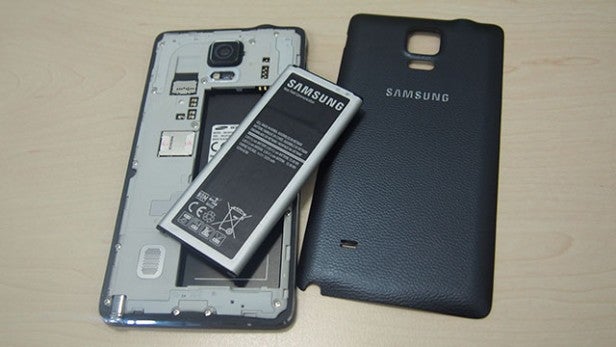 In more intense testing it fares much better than its predecessor as well. Running an SD video on loop with Wi-Fi turned off and 50% brightness you can get a more manageable 13 hours, which is an hour better than the iPhone 6 Plus manages and two hours more than the Note 3.

Things get better with charging as well. Thanks to the Snapdragon 805 processor and support for quick-charge technology, Samsung has supplied a charger that juices up the Note 4 40 minutes faster than the Note 3. A quick blast and within 10 minutes it added 10%. After 30 minutes it was near 40%. It’s impressive stuff, especially if you have a habit of forgetting to charge overnight. Just keep hold of that charger in the box, though. 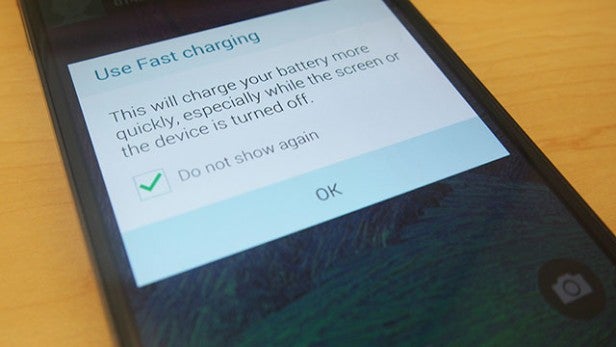 Call quality on the Note 4 is strong, but not anything really to shout about. Certainly not as good as the One M8. Voices on either end of phone calls come out loud, and the secondary mic included for noise cancelling clearly had a positive effect on drowning out background noise as we moved to noisier environments. The added metal in the design doesn’t appear to create any signal issues, thankfully.

We weren’t the biggest fans of the internal speaker on the Note 3, and were disappointed to find that things haven’t changed much, despite Samsung moving it away from the bottom edge to the back like it is on the S5. Its small size didn’t fill us with hope and much like it is on the S5, sound quality is better suited for loudspeaker conversations than delivering the type of warm, rich audio you’d want when watching a film or listening to music. It’s not tinny and it does go reasonably loud, with good clarity, but as much as we tire saying it, these are no match for the One M8 or even the One Mini 2’s Boomsound speakers. 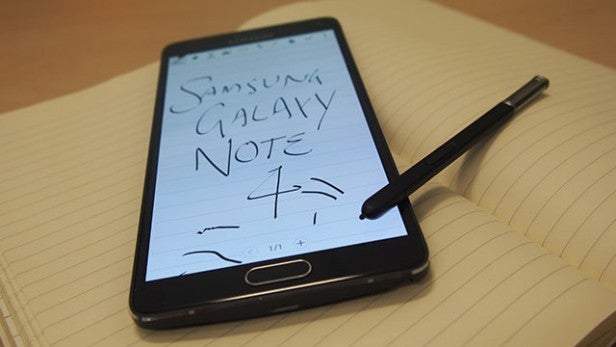 Should I buy the Samsung Galaxy Note 4?

For pure innovation alone, the Note 4 is one of the standout phones of the year. It might not be the best-looking handset but it’s getting there, and it largely delivers where it matters. It’s powerful, the screen is gorgeous, there’s a great camera and the battery life is massive. If you like using a stylus, then it’s the best one you can find on a phone, although we’d like to see Samsung do a little more to help find those S Pen-friendly apps.

Most importantly, Samsung is finally addressing those bloatware issues we’ve often criticized the company for in the past. It can still feel like an overwhelming approach to Android, but the decision to strip back some of the apps and unecessary gestures will no doubt be appreciated by prospective Note 4 owners.

How does it compare to the competition? Inevitable comparisons will be made with the iPhone 6 Plus and we’d say it matches if not surpasses the big Apple phone in most departments. The crucial difference is the operating system. iOS 8 is far more user friendly than Android with TouchWiz, and that’s going to be a major factor for many when choosing between the two. The LG G3 also packs a 2K QHD display, but it can’t match the Note 4 for battery life and power. Its nearest rival is actually the newly announced Nexus 6. The Motorola-built smartphone has near identical specs but a larger 6-inch QHD display. Google has yet to confirm pricing, but if it’s around the rumoured £500-£550 price mark, the Note 4 has some serious competition.

Price is going to be a potential stumbling block for some as well. The Note 4 costs £629, which is slightly more expensive than the 16GB iPhone 6 Plus (£619) and over £200 more expensive than the G3 (£400). That’s a lot of money to pay for a phone, although a Note 4 price cut is expected within 3 months of launch, so hopefully it shouldn’t be so pricey for long.

If you can stomach the cost and can live with the software quirks, the Note 4 is a phone that deservedly earns that Recommended badge.

Even if you don’t care for the stylus, the Note 4 is Samsung’s best big phone yet, and continues to stay on top of the phablet category it created.