TouchWiz is infamous for packing squillions of features into Android, many of which are arguably unnecessary – or at worst completely useless. The features obsession continues with the Galaxy Note 3, but it fits pretty well here. Its large screen makes great use of some of the extra features, and the Notes have always felt like pretty geek-friendly phones. 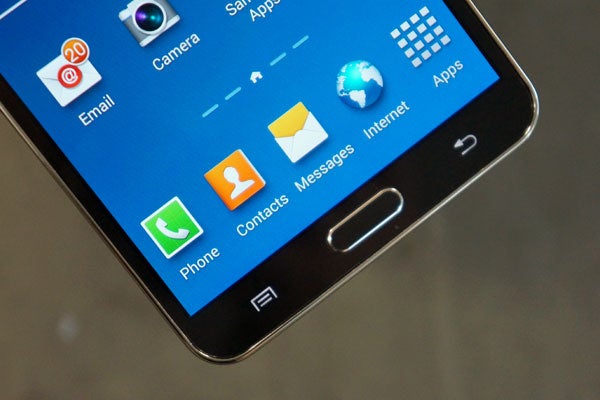 The interface’s look is bright and colourful rather than desperately cool or stylish-looking. You can mute the Samsung style a little with your own wallpaper and widgets if it looks a little too toy-like for your tastes, but the Note 3 software is a little less tasteful than the HTC One’s.

At a basic level, Samsung doesn’t mess too much with the way Android works. It adds things to the basic building blocks of the system, rather than altering the fundamentals. 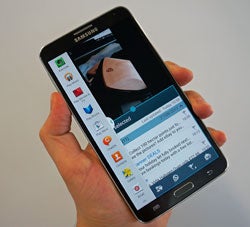 The best of these extras optimise how Android feels on a large screen. Multi View is one of the most interesting extras. It lets you run two apps on-screen at once, each taking up half the screen. However, it only works with select apps, not every single one you’ve downloaded from the Google Play app store.

Still, you can chat with friends using ChatON (a Whatsapp/Google Hangouts alternative) while reading emails, scan through two websites at once, have a book/video open while browsing the web – and all manner of other combos. You can choose how much screen space each app gets too.

Multi View gets a firm thumbs-up, even if it’s not new – it even features in the old Samsung Galaxy S3. Some of you will think it’s unnecessary, though.

Samsung also offers features to make the Note 3 easier to use for smaller hands. An accessibility mode lets you create a scalable ‘phone within a phone’ view. However, if you think you’ll use this as your everday view – please don’t buy the Note 3. Embrace the size or get out of town.

There are also one-handed versions of the keyboard, number pad, passcode unlock screen and call keypad.

Gesture command
Always keen to jump on a gimmick when it can, Samsung has packed in as many ways to interact with the Galaxy Note 3 as possible.

A touchscreen is no longer enough. The Note 3 also responds to fingers lingering above the screen, gestures in the air, palm swipes across the surface of the display and even senses your eyes looking at the screen.

These moves control pretty pedestrian things like flicking through photos, scrolling through web pages and silencing sounds or calls. As gimmicks to impress friends, they’ll do the trick, but we find they’re solutions to non-existent problems, and ones that can at times introduce their own issues. As some react to fingers hovering above the screen, you’ll occasionally set something off accidentally when browsing the web.

Perhaps more seriously, they turn your first few hours – or days – with the phone into a pop-up filled mess as the Galaxy Note 3 desperately tries to explain how to use its dozens of superfluous features every time you get near them. You can turn them all off within Settings easily enough, but don’t buy this phone for a technophobe. 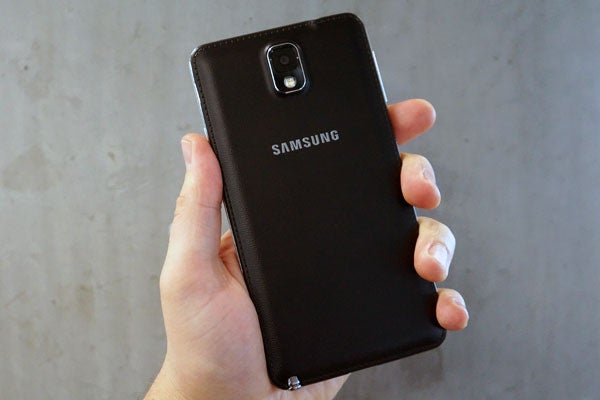 As well as interface tweaks, the Galaxy Note 3 comes with a bunch of additional apps. Helpfully – with our review phone at least – Samsung packs most of them into a pair of Samsung folders in the apps menu rather than bombarding you with their unfamiliar icons as soon as you get the phone out of the box.

As well as the note-taker Evernote, Flipboard, Trip Advisor and Dropbox (you get 50GB of Dropbox storage with the Note 3) you get these Samsung apps.

S Health
A basic fitness tracker that lets you log what you eat (a painful exercise in itself) and monitor the number of steps you take in a day using the phone’s accelerometer. Samsung could have incorporated full GPS tracking here, but it would have killed the battery in-use – and that’s only going to make everyone angry. It’s an app for your average, possibly slightly overweight, Joe and Joetta.

WatchOn
This is a TV guide app that also lets you control your TV and various home entertainment boxes using the IR transmitter of the Note 3. It looks snazzy, but setting it up for your telly is a pain. The commands in its database are only specific at the manufacturer level, so you’ll need to try out multiple iterations of each command (i.e. each remote button) to make them work with your specific TV.

S Translator
A solid translation app that – we imagine – may have been inspired by the communication difficulties between Samsung’s Korean HQ and its many global satellites. Just a guess.

S Voice
Samsung’s Siri alternative can perform the same sort of tasks as Apple’s voice assistant. It’ll call people for you, set calendar events, set alarms and so on. It’s not quite as advanced as Siri in some respects, but it’s the same sort of idea.

Knox
Probably the most impressive part of TouchWiz’s extended software suite is Knox. And it’ll be the least-commonly used by normal people. Knox is a hardcore security solution that secures work data much more completely than standard Android. Even the Pentagon has cleared it for use within its walls. Either your work will say that you have to use it, or you probably won’t use it at all.

Is TouchWiz’s interface and software library a success? Yes, it doesn’t
make the phone run slowly, doesn’t look too bad and isn’t buggy. But it
does require patience, isn’t quite as snappy as vanilla Android 4.3 and
is about as far removed from the simplicity of an iPhone as you can get.

The Galaxy Note 3 uses a Qualcomm Snapdragon 800 processor, which is a generation more advanced than the chip of the Galaxy S4 (the quad-core version we have in the UK). It’s significantly more powerful, making this one of the fastest phones on the market right now. 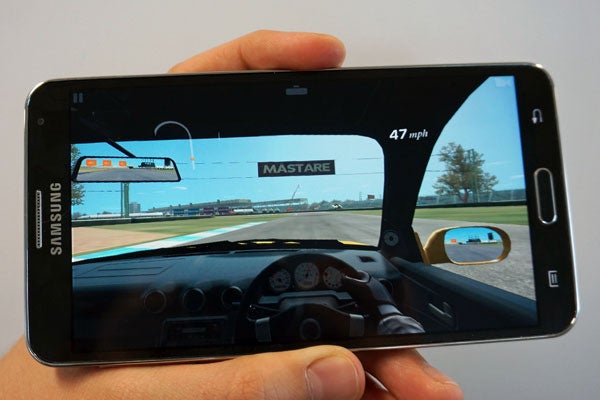 There are few games to challenge it on Google Play right now. Our standard gaming test, Real Racing 3, is no problem for the Note 3. And the 3D Mark and Geekbench tests show that it’s on par with, or slightly faster than (thanks to its super- generous 3GB of RAM) the Snapdragon 800 Xperia Z1.

The extra power doesn’t really manifest that obviously, but it is there. We’ll have to wait until Epic Games releases Infinity Blade 3 on Android to see whether the Snapdragon 800 is really capable of the sort of graphical feats as the iPhone 5S’s new Apple A7 chipset. It’s all rather academic at present.