The Samsung Galaxy Note 10.1 has had a rocky road. When we first saw it at the beginning of this year, it was a dual-core tablet with 1GB of RAM running a fairly standard version of Android with TouchWiz. What made it special was its Wacom-based, pressure-sensitive S Pen, a huge draw for creative types and those who still prefer to take hand-written notes.

Since then, the rest of the tablet has received a facelift to become pretty special too. Its processor has been upgraded to the same quad-core affair that powers the mighty Samsung Galaxy S3, and RAM has been upped to a whopping 2GB, pulling the Galaxy Note 10.1 ahead of the Asus Transformer Infinity as the most powerful Android tablet available.

Even the interface has seen some serious tinkering, with the standout being a split-screen multi-tasking ‘window’ arrangement that’s yet another first among Android tabs, and gives the Note 10.1 more of the productivity potential of a Windows slate than most of its rivals. Oh, and there’s a 3G version…

Is it a worthy big brother to the original Samsung Galaxy Note phablet and a serious challenger to the mighty iPad 3?

Samsung Galaxy Note 10.1 Design
Unfortunately, the Galaxy Note 10.1 isn’t the prettiest of tablets. If its design is the result of the legal wrangling with Apple and to avoid iPad-copying accusations, we can only say that the fruity company doesn’t have a patent on minimalism, and tablets like the Asus Transformer Prime have proven it.

Our Note isn’t helped by being white. First off white plastic generally tends to look just a tad more… plasticky than when it comes in black, and second, the black screen, white bezel and silver outer surround add too many disparate layers. So if you’re trying to decide which colour Galaxy Note 10.1 to go for, we’d recommend succumbing to the dark side. 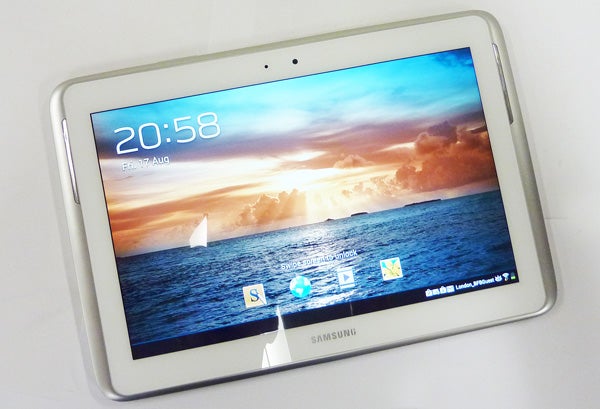 Its speakers add yet another contrasting element, sporting chrome inset covers to either side rather than being subtly integrated – again, we suspect this is to set the Note apart from a certain iDevice. Of course, the mere fact that this tablet has proper stereo speakers puts it in a league of its own where audio is concerned, though we’ll get to that in a bit.

Samsung Galaxy Note 10.1 Feel and Build
Again, where feel is concerned, Samsung’s latest tablet just isn’t quite on the ball. Don’t get us wrong, the plastics feel solid and the slightly bulging silver surround helps to provide a decent grip. But the slick, glossy back isn’t particularly pleasant under the fingers and doesn’t give much traction.

As a result, the Galaxy Note 10.1 just doesn’t lie as securely in the hand as other premium all-plastic tablets like the textured Transformer Pad 300, or of course the anodised aluminium back of the new iPad. 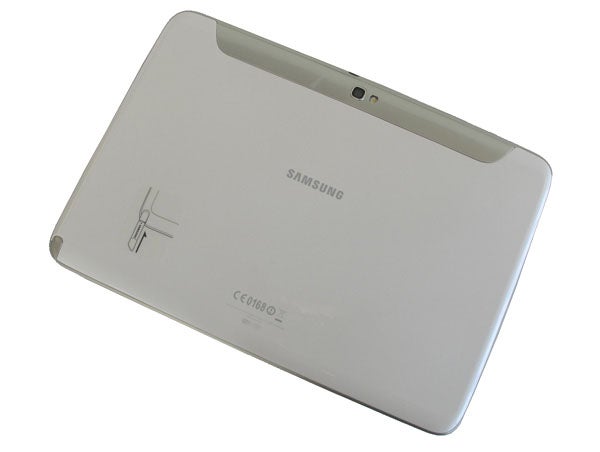 However, build quality is pretty good. The plastics used throughout are very solid except for the rear panel which flexes slightly if you press in on it, but nowhere else is there a hint of flex or creak in normal usage. Our only real concern here is that glossy plastics tend to scratch easily, but we found no evidence of this happening on our Note.

At 595g, the Note 10.1 is also very light for a wider-than-most tablet with pen, beating out both the new iPad and lighter iPad 2.