At just £49, it's easy to imagine that the Samsung Galaxy Fit 2 will strike a chord with some people, particularly anyone who simply wants a cheap wearable that can track their steps, send notifications to their wrist and offer encouragement for a healthier lifestyle. However, it's an inferior fitness tracking device to its predecessor by having no form of any GPS tracking and a heart rate sensor that's miles off the mark. The Fit 2 just doesn't live up to the expectations set by a brand like Samsung.

Taking on the likes of Fitbit and Xiaomi, Samsung’s back with its second fitness tracker in the Samsung Galaxy Fit 2.

As we’ve seen since the Honor Band 5, fitness trackers have been getting progressively cheaper as smartwatches offer more features at a competitive price. For instance, I recently tested the Fitbit Versa 3, which has offline music storage, GPS tracking and Alexa/Google Assistant compatibility; features that were once out of reach for a sub-£200 wearable.

With the exception of Fitbit’s more premium Charge series, it seems likely fitness trackers will continue to drop in price to target the entry-level market, and Samsung’s latest device is the perfect example of this. While the Fit 2 does bring some improvements, there are some notable features from its predecessor that have been dropped to lower the price to just £49/$59.99 from the original Fit’s £89/$99.99.

The lower price is sure to make the Fit 2 a tempting buy, but after thorough testing, I think it’s crucial to fully understand what you’re getting into with Samsung’s new wearable. 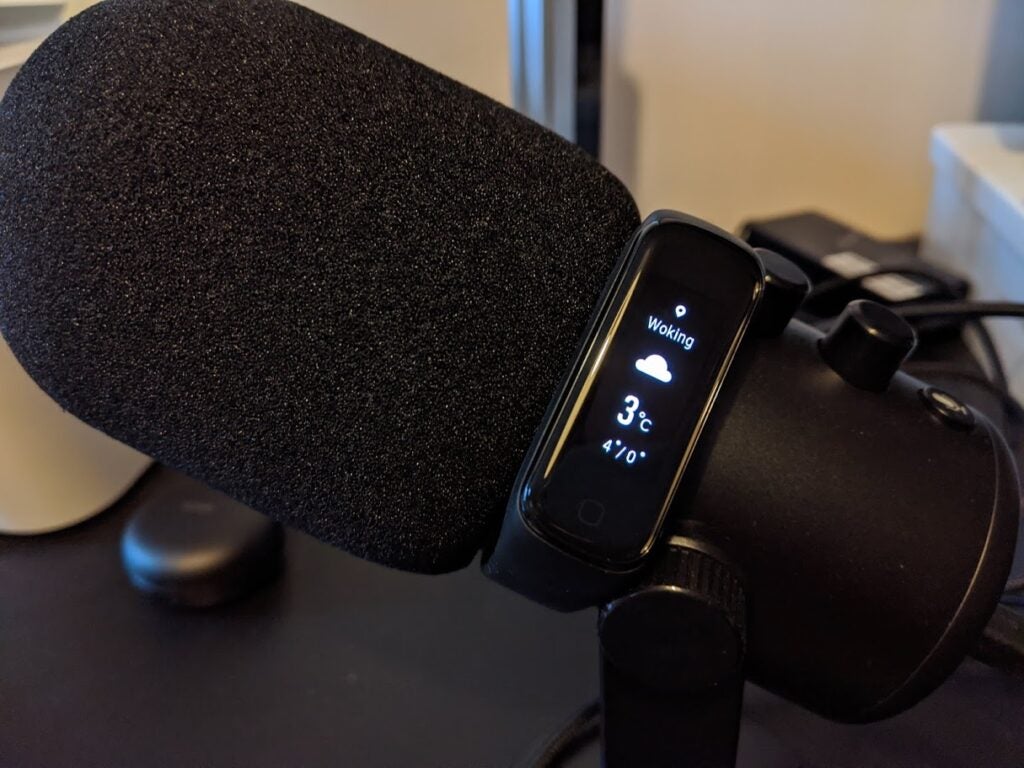 Design – sleek enough but a step back in quality

At just 21g, I regularly found myself forgetting the Galaxy Fit 2 was even on my wrist. It’s a great fit for anyone with small wrists or those put off by bulkier smartwatches. From a visual standpoint, the Fit 2 borrows a great deal from its predecessor, but there are a few small differences.

For instance, the one physical button that used to flank the Galaxy Fit’s left-hand side is now gone, with all interactions delegated to the touchscreen and the almost invisible home button just below the display. The silicone material that comprises the watch strap now also sprawls over the sides of the device, giving it a far more seamless appearance than before.

What detracts from its air of simplified elegance, however, is the Fit 2’s irritating clasp mechanism. Instead of using a single prong clasp like the Honor Band 5, the Fit 2 prefers a hole-punch approach that requires the user to loop what’s left underneath the strap. It’s a similar approach to the Fitbit Sense, which did it better, as I found the act of trying to jam the remainder of the strap underneath the loop irritating on my skin. 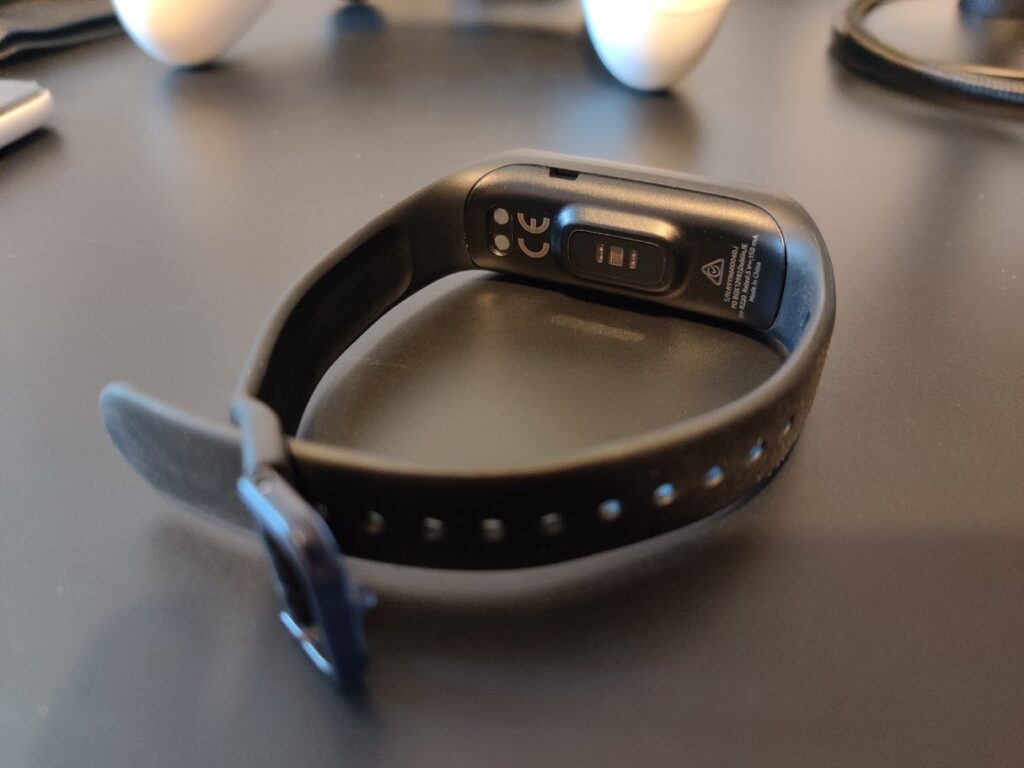 In order to keep the price down, the integrity of the Fit 2 has been downgraded as well. While the original Fit had a military grade MIL-STD-810G rating, robust enough to withstand serious damage, that certification is nowhere to be found this time around. Luckily, the Fit 2 does come with 5ATM water resistance (letting you submerge with the device up to 50 metres), so there’s nothing stopping you from taking it for a few laps around the pool.

It’ll be hard to gauge from the photos in this review (although kudos if you can), but the Fit 2 has a slightly larger display with its 1.1-inch display – bigger than the Fit’s 0.95-inch screen. That makes it just a tad easier to view the time or an array of metrics during a workout.

The Fit 2 carries over the same AMOLED technology, ensuring everything shown on the screen is bright and colourful as watch faces still manage to pop despite the small real estate they have to work with.

In fact, it’s because of the small display that everything within the UI looks crisp, and I found it extremely easy to read what was on the screen whilst out for a run. The only thing I will say is that, at times, the small display makes it very tricky to interact with some of the included apps. 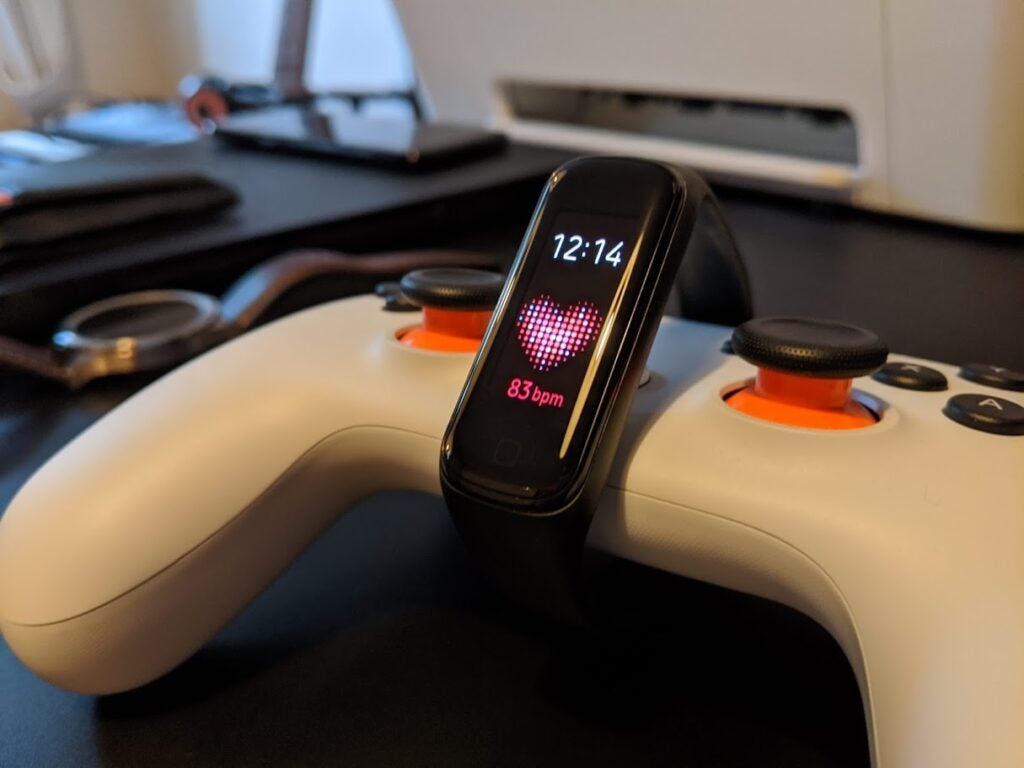 The timer, for instance, has the allotted time in the middle with arrows on either side to alter it – the problem is that as soon as you go to tap on one of those arrows, your finger naturally blocks your view of the time. It’s not a deal-breaker, but it would be nice to see a bit of extra consideration for issues like this in the future.

Being just £49, it’s fair to assume that the Galaxy Fit 2 isn’t going to come back with an abundance of must-have features. But even by the standards set by other fitness trackers, I genuinely expected there to be more here – particularly from a big-name brand like Samsung.

The most glaring issue here is that there is no form of GPS connectivity for tracking outdoor activity. As someone who benefits from a local park with an almost circuit-like layout, I’m always keen to know exactly how each run compares to the last and where I can improve. Without any map to look back on, any post-run analysis becomes a game of guesswork based on other factors.

If you incorporate stairs or a stepmill into your workout routine then you’ll be out of luck here as well, with no sign of an altimeter on the Fit 2. It’s not all bad news however, as the wearable does include a number of essentials such as music control, notifications and quick responses (which can be edited in the Galaxy Wearable app), stress tracking and most importantly, sleep tracking. 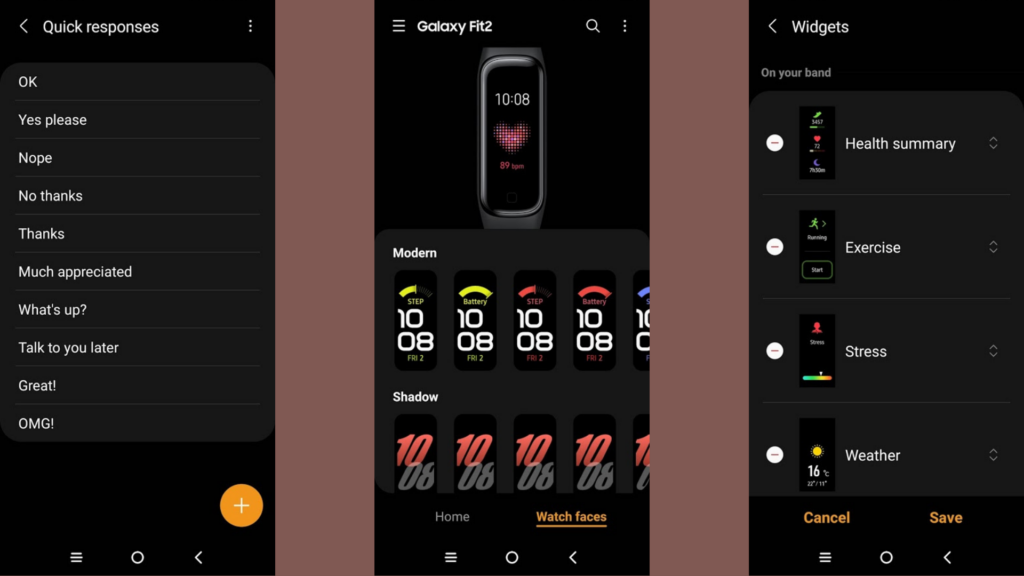 The Samsung Health app does a really good job of presenting information about your circadian rhythm in a clean and understandable manner. Much like with the Fitbit app, you’ll get a sleep score out of a hundred, and you can see your sleep trends to get an honest look at how much downtime you’re actually committing to.

You might have noticed I mentioned two separate apps that work in conjunction with the Fit 2, and if you’re currently scratching your head then you’re not alone. The Galaxy Wearable App lets you manage settings and apps on the Fit 2, while the Samsung Health app lets you see all of your fitness and sleep tracking results. On top of that, you need to install a separate app/client specifically for the Fit 2 to work with the Galaxy Wearable app. It’s all needlessly convoluted, and I would love to see this streamlined into a single app like most other competitors.

Fitness tracking – The Samsung Galaxy Fit 2 has plenty of workouts available, but a let-down in heart rate tracking

In spite of its affordability, the Fit 2 has a sizeable number of workouts that can be tracked via the device. There’s a good amount of variety here with fitness staples like rowing and yoga, but you can also track a range of sports including basketball and golf.

On a strange note, there are several individual exercises that can be tracked like arm curls and bench press. These are great exercises and I can highly recommend engaging with them, but usually they’re part of a larger workout, so to see them singled out here is a bit odd and it feels as though the attention could’ve been paid to other workout types. 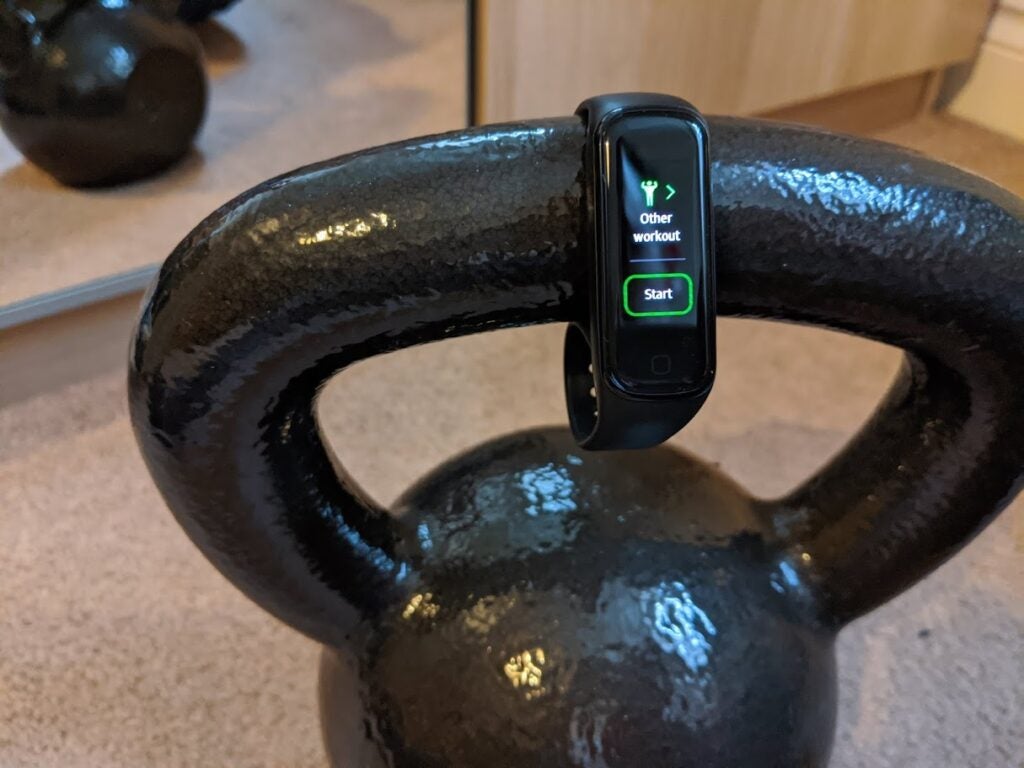 What the Fit 2 does have is superb automatic workout tracking. To stay active, I try and get out for a lunchtime walk when possible, and each time the Fit 2 did a fantastic job of knowing exactly when I set off to when I came home and sat down again. It was interesting to see because I rarely log these walks as part of my exercise routine, but the Fit 2 reminded me that they do go a long way towards hitting my daily goals.

This is all without mentioning the absolute highlight, which isn’t on the device itself but rather on the Samsung Health app. Acting as a great introduction for newcomers, the Health app sources a variety of workouts from other well known fitness apps, not only showing you an easy, step-by-step guide on technique, but also allowing you to add these workouts to your schedule so that the Fit 2 can remind you to stay on track.

As if that wasn’t enough, there’s also a section for mindfulness, which, as I’ll gladly stress for the seven hundredth time, can offer great returns for your physical health. It’s great to see the practice of meditation given its due here.

What really lets the Fit 2 down however, is its abysmal heart rate tracking. During a quick 3km run, I managed to incur a peak heart rate of 184BPM and an average of 154BPM – as told by my accompanying heart rate strap. To hear the Fit 2’s version of events however, I never exceeded 157BPM and kept to an average of 120BPM. 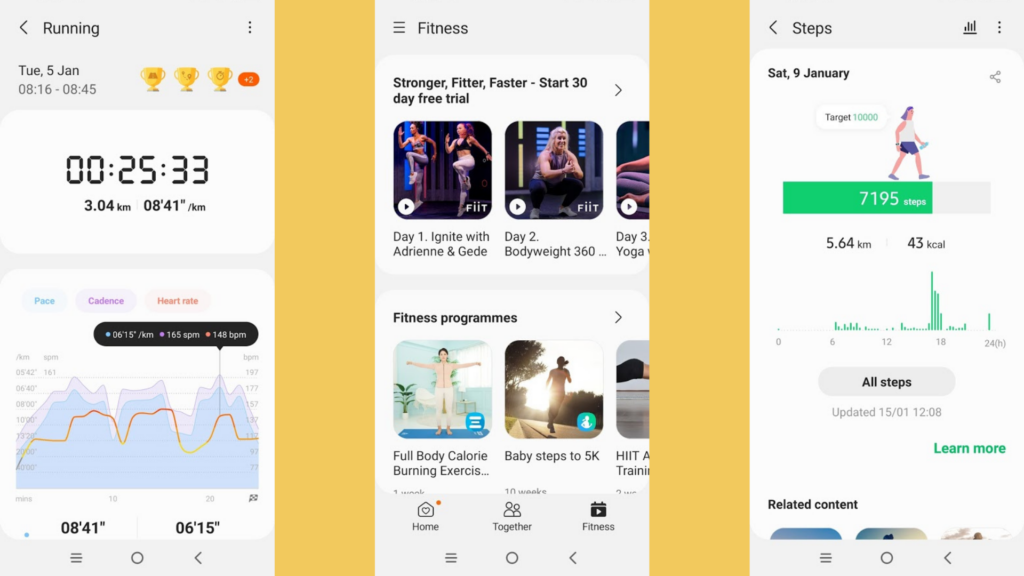 These results are completely off the mark, and so my advice would be to largely ignore the Fit 2’s heart rate readings. But if you’re eager to know exactly how you’re performing then I’d recommend looking elsewhere entirely.

While almost every other aspect of the Galaxy Fit 2 has been a case of adding and taking away, the battery life is a huge improvement with Samsung quoting a 14-day battery – double the quoted figure for the Galaxy Fit.

Thus far, the Fit 2 has held up to that promise, and that’s not under easy conditions either. Since the initial charge, I have tracked a total of five workouts – with several instances of auto-tracking as well – and after eight days I still have 42% left in the tank.

I should point out that I’ve also been wearing the Fit 2 throughout the night for sleep tracking, which leads me to believe that I could get close to the two-week limit even whilst using the Fit 2 as a 24/7 device.

Should you buy the Samsung Galaxy Fit 2?

Seeing a big brand like Samsung release a fitness tracker for under £50 almost feels too good to be true, and the temptation to pick up something so affordable is definitely tangible, but the Samsung Galaxy Fit 2 is too much of a mixed bag to fully recommend.

What the fitness tracker gains in affordability and longer battery life, it loses with a less competent heart rate sensor, and less durable build quality.

If you’re after a simple wearable that offers notifications and a good amount of workout routines to help you get motivated, the Fit 2 might have some appeal. For everyone else, it’s far better to look towards more competitive devices like the Honor Band 5.