If there’s one company that’s embraced the Android platform with gusto, it’s Samsung. As well as producing some of the best high-end Android smartphones, including the Galaxy S II, it’s also come out with a range of handsets that are more friendly on the pocket including the likes of the Galaxy Ace and Galaxy Pro. The Fit slots in alongside these budget handsets, as it’s got a similar price tag and a similar line up of features.

Budget smartphones have a tendency to look quite low rent, but this handset largely manages to avoid this trap. From the front it actually comes across as quite a handsome device. With a dark chrome band running around the outer edge and light chrome highlighting on the home button and earpiece speaker grill, its classier than most budget rivals. The rear doesn’t look quite as good, though, as the ribbed battery cover feels quite plasticky. 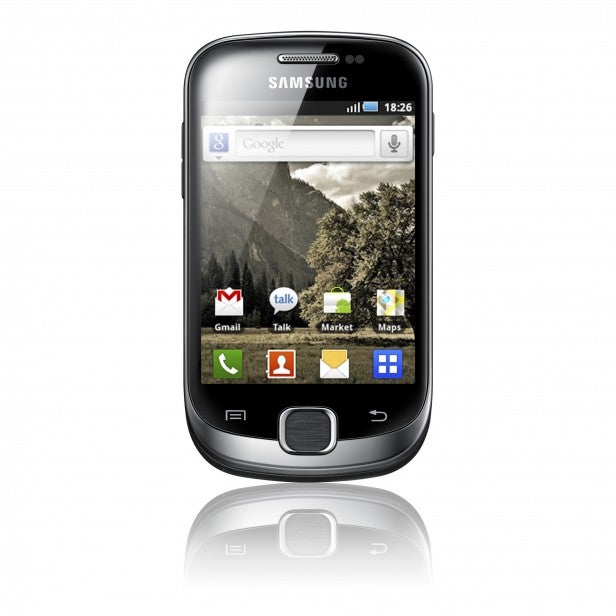 Like most of Samsung’s Android handsets, this one has three, rather than four buttons at the bottom of the screen. These are for the menu, home and back buttons, with Samsung leaving out the search button you’ll find on many of its competitors’ Android products (we prefer the Samsung approach as search is replicated in software). On the right hand edge there’s the power button, while the left-hand side is home to a volume rocker switch. Sadly, the fit lacks a dedicated camera button, which is a tad annoying, but lamentably is still something of a rarity on Android phones. At least there’s a standard 3.5mm headphone jack at the top next to the micro USB port which is hidden behind a sliding plastic dust cap. 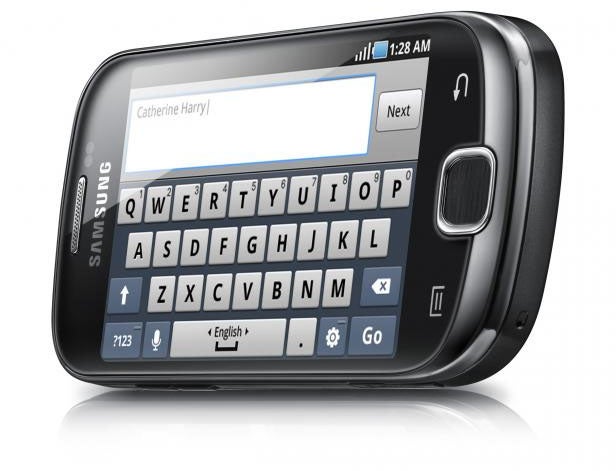 Thankfully Samsung hasn’t made the same mistakes on the Fit as it did on the Pro, because this models capacitive display does support multi-touch gestures, so you can pinch to zoom in on webpages, maps and pictures. The display, at 3.3 inches, is also reasonably large for a budget device and larger than the Galaxy Mini. It’s bright too, and colours are reasonably vivid, but black levels obviously aren’t as good as higher-end phones, so pictures and videos can look a little bit washed out. The biggest problem, though, is the screen’s low resolution, which maxes out at just 240 x 320 pixels. Even Samsung’s own aging Galaxy Apollo has a screen with a slightly higher resolution than this. The lack of pixels does significantly compromise the user experience. You have to zoom in quite far on webpages before they become readable, for example, and even text in day to day apps like Gmail looks a tad blurred and indistinct.

Like many other entry level Android devices, the Fit runs on a Qualcomm MSM7227 processor that’s clocked at a lowly 600Mhz. This is a long way off the speedier 1Ghz processors you’ll find on higher-end devices, but the lesser graphical demand of the low res display means that most day to day stuff ticks over at a decent speed. However, you will notice the lack of grunt when you go to play more demanding games, as they tend to suffer form jerky graphics. Also, the phone doesn’t have enough poke to run Flash, so you can’t view videos on most websites and Flash-based apps like BBC iPlayer don’t work. 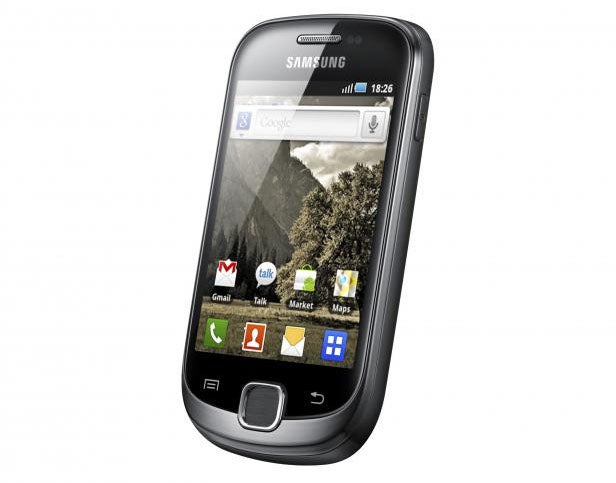 The handset only has 160MB of internal memory, but it does come with a 2GB microSD card, so you can store a decent number of photos, videos and music tracks on it right out of the box. The card slot also supports cards of up to 32GB in size if you feel you need more storage space.

It’s a bit disappointing that the Fit runs version 2.2 (Froyo) of Android, rather than the latest V2.3 (Gingerbread). Granted, there isn’t a huge difference between these two versions of the OS, but it’s always better to start with the latest version, as manufacturers have been slow to push out new version of Android to their devices.

Samsung has added a customised version of its TouchWiz user interface over the top of Android. This isn’t that drastic a change from the usual Android interface, with the big difference being the addition of four permanent shortcut icons at the bottom of the home screen for the dialler, contacts book messaging and app drawer. The app drawer has also been tweaked so it now scrolls horizontally, rather than vertically and Samsung has added a few apps, including its Socialhub app that groups together your emails and social networking messages in a single inbox. You also get the useful Swype keyboard pre-installed, although by default the handset is set up to use the basic, but perfectly functional Samsung one. 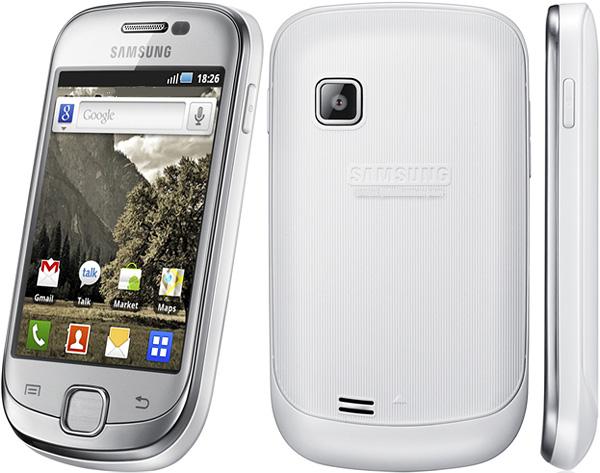 Most budget Android phones have fairly poor cameras, but thankfully that’s not the case here. The Fit sports a rear mounted 5.0megapixel snapper with autofocus. The camera does have a slight tendency to overexpose shots, but for the most part it produces pretty good photos with surprisingly good levels of detail, even if colours don’t look quite as vibrant as they could do. The camera app is also pretty snazzy, and includes some interesting stuff such as a panorama mode that stitches together multiple shots into one super wide photo. Unfortunately, there’s no flash though, so indoor shots come out looking very dark with a lot of noise and grain. Video isn’t all that hot, either, as it’s limited to capturing footage at a lowly 320×240, which looks fine on the phone’s screen, but rubbish when you transfer it to a PC.

Call quality was generally quite good. Although the ear piece isn’t exactly overly loud we had no problems understanding what people were saying and similarly the mic seemed to capture pretty clear speech. Battery life isn’t great though, as you can expect to have to charge the phone at the end of each day even with just pretty moderate use.

The Galaxy Fit is not a bad budget Android smartphone thanks to its stylish design and above average camera. But while it more than holds it’s own against the likes of the Vodafone Smart, its low resolution screen means it pails in comparison to the Orange San Francisco, which is priced at a similar level and remains the best of the budget Android handsets around at the moment. 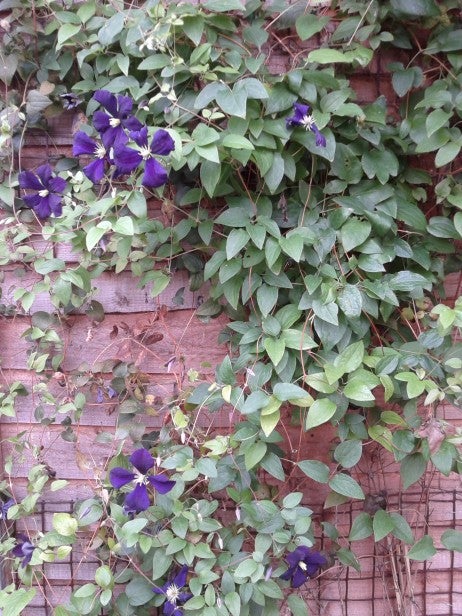 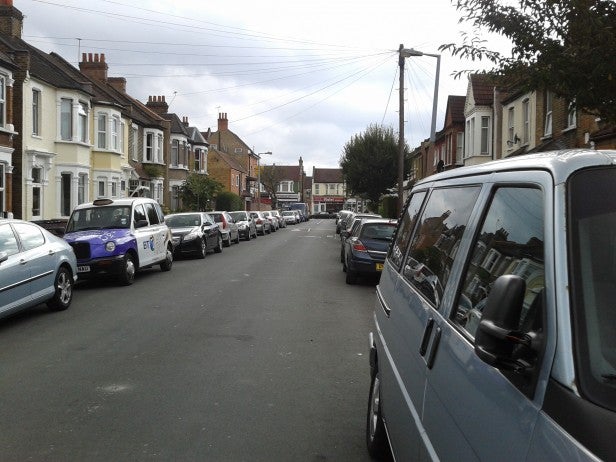 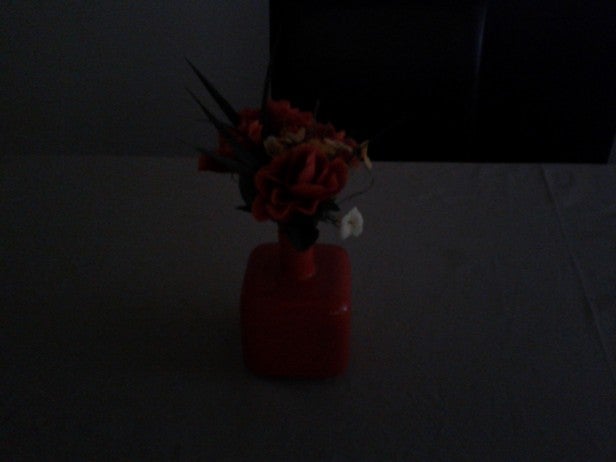