The Samsung Galaxy Book Pro has an outstanding design, being so light and slim that you can comfortably pick it up with one hand. It comes with an impressive spec sheet, too, including the latest Intel processor options, an AMOLED display and optional LTE support. However, Samsung's desire to create such a lightweight laptop has resulted in compromises to the build quality, which can't be ignored.

The Samsung Galaxy Book Pro is one of three laptops in Samsung’s new range, with an astonishingly slim and lightweight design that makes it an ideal option for those who champion portability.

Samsung is clearly challenging the likes of the Acer Swift 5 and LG Gram laptop ranges with the Galaxy Book Pro, while also seeing similar high-end specs as the Dell XPS 13 – it comes packing Intel’s 11th-generation processors.

However, it’s the glorious AMOLED display that’s the special sauce feature here, with Samsung using its TV expertise to leapfrog its laptop competitors.

But that’s enough about the specs; how does the laptop look in the flesh? Samsung invited me to its Unpacked event for a sneak-peek. Check out my early impressions below.

Prices for the 13.3-inch Samsung Galaxy Book Pro start at £1099, climbing thereafter once you start upgrading the processor and storage. For those with a more generous budget, there’s a 15.6-inch model available with a £1199 starting price.

The Galaxy Book Pro will hit stores on 14 May 2021, with pre-orders open right now. Those who pre-order will also receive a free pair of Galaxy Buds Pro in the bundle.

The most exciting feature of the Galaxy Book Pro is its ultraportable design. Even though Samsung had already divulged that the 15.6-inch model weighs a dainty 1.05kg before the Unpacked event, I still couldn’t help but gawp when lifting up the device with one hand. It’s hard to believe Samsung hasn’t forced Harry Potter to hide behind the curtain and cast a levitation spell.

The 13.3-inch model weighs even less at 870g, which undercuts the 965g LG Gram. Samsung has achieved this by making its new laptop super-skinny. The 13-inch model measures in at 11.2mm, while the 15.6-inch model is only 11.7mm tall when closed. For comparison, the Dell XPS 13 has a height of 14.8mm – and is considered one of the slimmest laptops around. 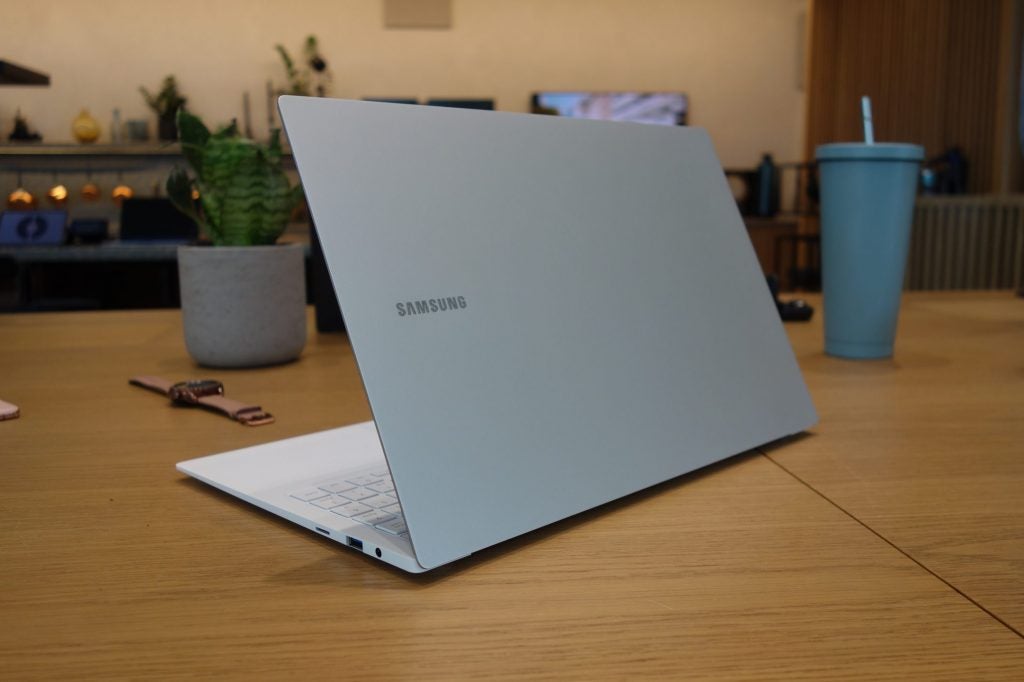 I’m a big fan of slim laptops, which are dead-easy to slot into a bag or even carry around the office in one hand. While I didn’t dare fit the Galaxy Book Pro into my bag and risk being tackled by security, I’m confident this will be one of the best laptops at its price point for on-the-go work. There’s nothing really like it available right now.

Despite its slender form, Samsung has been able to squeeze in a generous number of ports, including HDMI, USB-A and a microSD card slot, as well as the versatile Thunderbolt 4. Dell has previously suggested it can’t fit a USB-A port on its skinny XPS 13 laptop, but Samsung has proven it’s very much possible here.

The laptop looks appealing, too. Samsung is offering the Galaxy Book Pro in both Mystic Blue and Mystic White, which helps it to stand out from the wave of black and silver laptops on the market. The keyboard feels good, too, with a satisfying click to each key-press, while a fingerprint scanner allows for speedy logins. 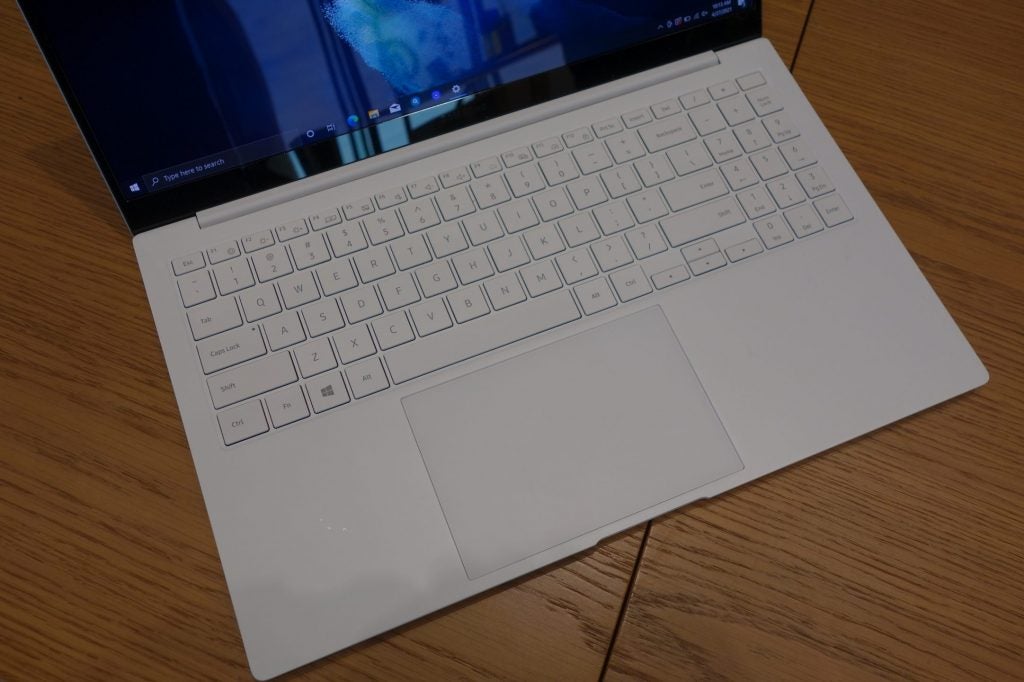 However, as I’ve found with the LG Gram series, there are drawbacks to making a laptop so slender. Rather than use only aluminium for the laptop’s chassis, Samsung has also thrown in some magnesium to ensure the laptop is as light as possible. Magnesium isn’t quite as sturdy as aluminium, and this is noticeable when you push down on the chassis and see it flex inwards.

This makes me slightly hesitant about the build quality, and whether it will be able to withstand as many knocks and shocks as laptops from Dell and Microsoft, for example. Magnesium constructions can also result in a bouncy typing experience, although I didn’t spend enough time with the Galaxy Book Pro to see if this issue was prevalent here. Is this a deal-breaker? Personally, I say no – but it’s still a trade-off you’d need to consider if you want such a lightweight laptop.

The second major drawback is the performance. Samsung has fitted in 11th-generation Intel Core processors here, offering both i5 and i7 options. Those are the best Intel chips you can currently get for lightweight laptops, and are far more reliable than the Qualcomm Snapdragon 8cx CPU found inside the Galaxy Book S. 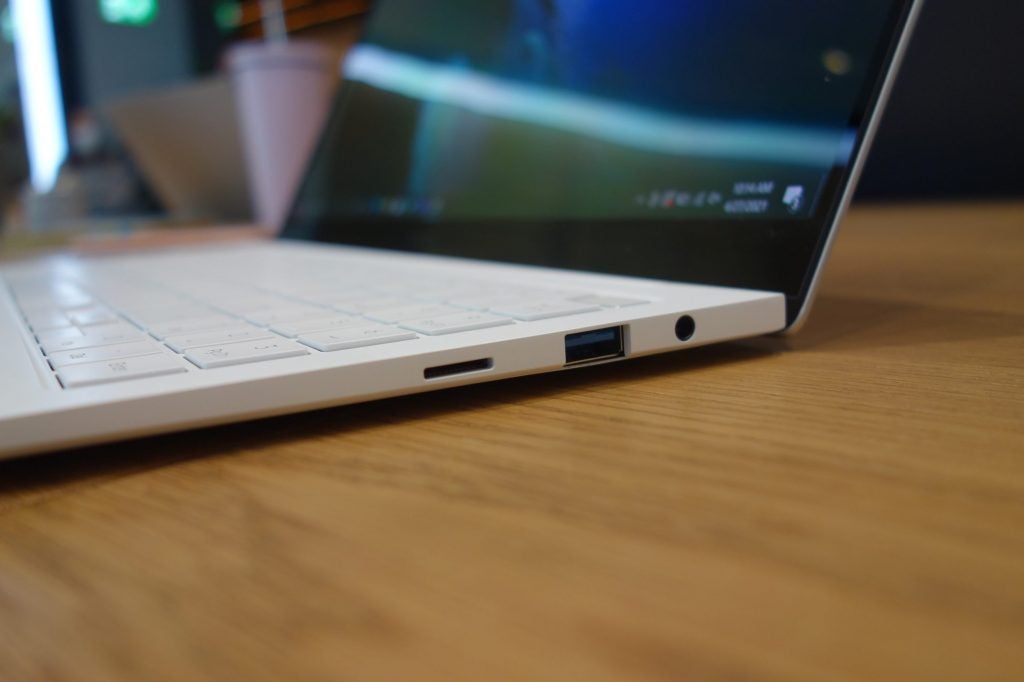 However, if the Galaxy Book Pro is anything like the LG Gram range, then that slender build is likely to throttle performance – unless Samsung has come up with a breakthrough cooling solution. This would mean that, in terms of performance, the Galaxy Book Pro may not be quite as fast as the Dell XPS 13 or Razer Book 13, despite Samsung using the exact same chips.

Of course, this is just speculation right now, since I wasn’t allowed to conduct any benchmark tests during the hands-on event. I’m confident you’ll still be getting blazing-fast productivity performance that will happily see the Galaxy Book Pro sail through basic day-to-day tasks. However, you may be better off with the likes of a MacBook Air or Razer Book 13 for content creation or gaming on the side.

I do think the ‘Pro’ moniker here is misleading – people usually think of the MacBook Pro, which can feature a supremely powerful discrete GPU. The Galaxy Book Pro is limited to Intel’s integrated Iris Xe graphics, which offers  respectable performance but nowhere near the standard of a MacBook Pro or any other laptop aimed at professionals. 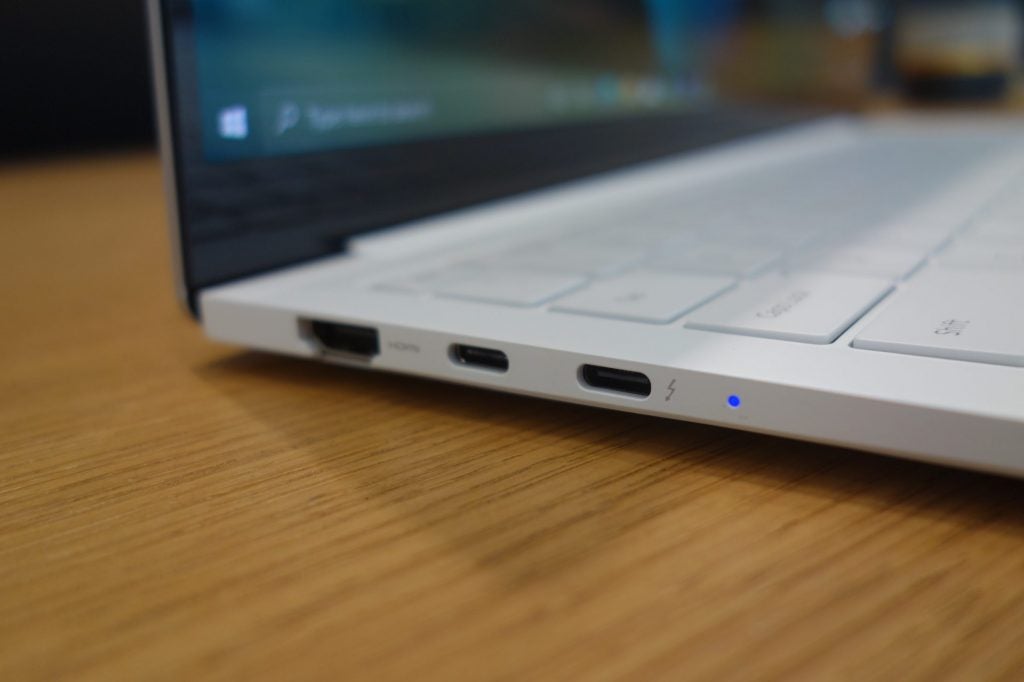 Samsung is also offering models with LTE support, which means you can connect the laptop to the internet away from your Wi-Fi router. However, you’ll need to slot in a SIM card for this to work – which likely means borrowing your smartphone’s card. Although not ideal, it remains a nice-to-have option for getting some work done on the move.

It’s a shame then that there’s no 5G support here, as included with the Galaxy Book Flex2 5G. I assume this is a decision Samsung made to keep the cost down – but it does mean LTE speeds won’t be in line with modern-day expectations.

A feature that will likely to result in much excitement is the AMOLED display. Compared to conventional LCD laptop screens, the Galaxy Book Pro’s AMOLED panel offers far higher contrast and punchier colours. Switching between the Pro and the standard Galaxy Book, the difference is immediately obvious, resulting in a superior picture that really gives TV and films a visual boost. 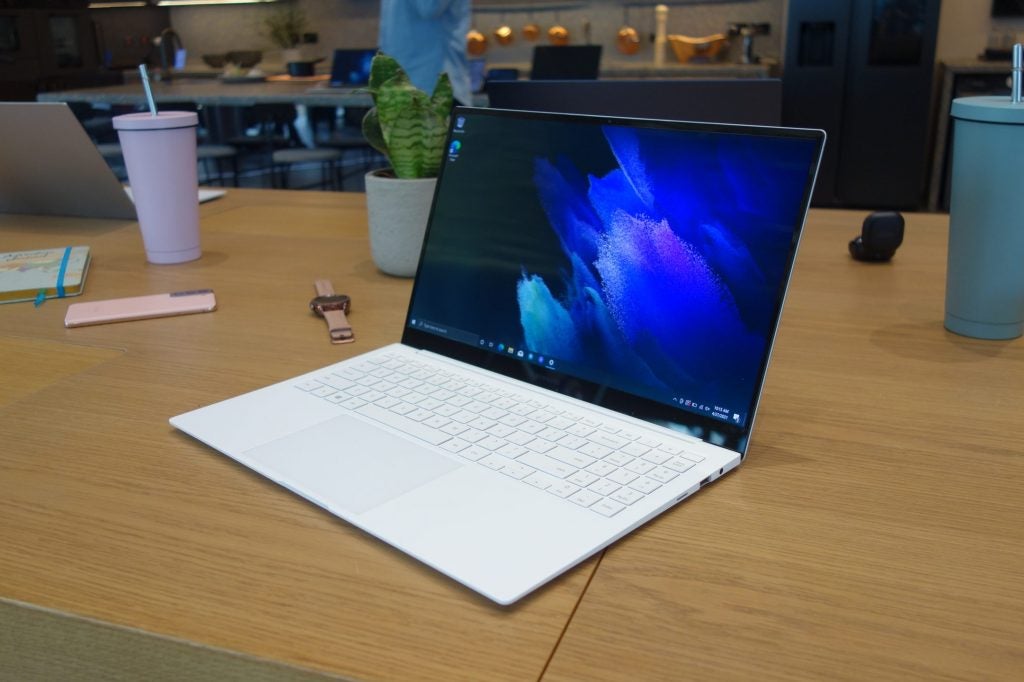 There are drawbacks to AMOLED displays, however, which were immediately noticeable when trying out the Galaxy Book Pro. AMOLED screens are harder to view in bright lighting conditions, which means you’ll likely struggle to view the screen outdoors on a sunny day.

The decision to go with AMOLED is a brave one by Samsung, considering it’s pitching the Galaxy Book Pro as a laptop that excels at on-the-go work. That said, I think such shortcomings can be forgiven when you see how good the picture quality is.

The Galaxy Book Pro impresses. The jaw-droppingly skinny and lightweight build makes it a dream for those who work on the go, while the spec sheet looks competitive enough to challenge the very best laptops. Samsung has also thrown in that gorgeous AMOLED panel and optional LTE support to make the Galaxy Book Pro stand out in a hugely competitive market.

But I have some reservations. While the use of magnesium alloy helps to reduce the weight, it has impacted the build quality of the Galaxy Book Pro – which could be problematic for a laptop that’s built for working on-the-go. It could also potentially suffer the same issues as the LG Gram when it comes to bottlenecked performance as a result of the limited room for airflow.

Of course, I can’t comment on the likes of performance and battery life just yet, since I’ve only spent around an hour with the laptop and haven’t been able to conduct any benchmark tests. So, for the full lowdown on this new Samsung laptop, keep your eyes on Trusted Reviews for the incoming review and final verdict.