The Samsung Galaxy Book Ion is aimed at casual laptop users who want the best experience possible. A glorious QLED display, long-lasting battery life and ultra-portable premium design make it a worthwhile alternative to Dell and Microsoft systems, but that high price will be hard to justify for some, especially with the sub-standard keyboard and lack of a decent integrated graphics performance.

The Samsung Galaxy Book Ion looks like your typical ultrabook on the surface, yet Samsung has prioritised different areas to the likes of Dell, Microsoft and Apple to make it feel like a relatively unique device.

While most high-end laptops are obsessed with cranking up performance power as high as possible, the Galaxy Ion instead focuses on maximising battery life, improving Netflix content with a gorgeous QLED display and ensuring everything is packed inside a ridiculously lightweight design.

This means that the Ion won’t be able to dabble with casual gaming or entry-level creation, but if you’re content to stick to the basics, this may be one of the best laptop options available.

The Samsung Galaxy Book has so many impressive features that it’s genuinely difficult to know where to begin. But the one advantage it has over all of its rivals is how impressively light this 13-inch laptop is.

Weighing just 970g, the Ion is lighter than the majority of high-end laptops I’ve tested. I can effortlessly pick this laptop up with one hand, and it’s compact enough to fit in a large handbag or small rucksack. The only lighter systems that spring to mind are the 13-inch LG Gram and Samsung’s own Galaxy Book S, but the Ion packs more power than both of those. 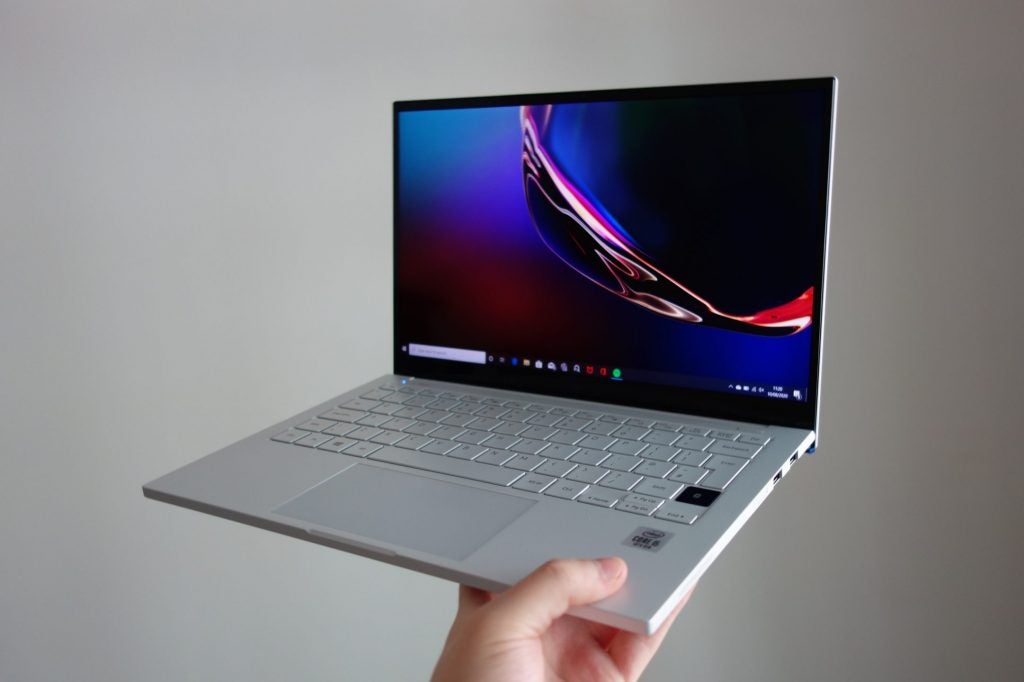 The Ion looks great too, with a razor-thin bezel surrounding the screen and a sleek metal casing ensuring a premium finish. That said, I’m a little dubious about the build quality, as a little flex is noticeable when pushing down on the deck. The hinge seems sturdy enough though, with the screen remaining fixed in place when I give the device a shake.

The Aurora Silver colouring looks smart, but with no patterned texture it ends up looking generic. I’m craving more colour options here too, especially after Samsung teased us with that gorgeous blue Galaxy Book Flex. The Ion does feature a sprinkling of blue, found on both the rear rim and the fingerprint reader, but they’re too subtle to spice things up significantly. And WiFi 6 support ensures future-proofing if you fancy upgrading your router in the coming years.

As mentioned, the Ion features a fingerprint reader in the bottom-right corner of the deck, which is easy to reach and satisfyingly responsive. You also get a 720p webcam sitting above the screen, offering decent capture quality for both snaps and video. 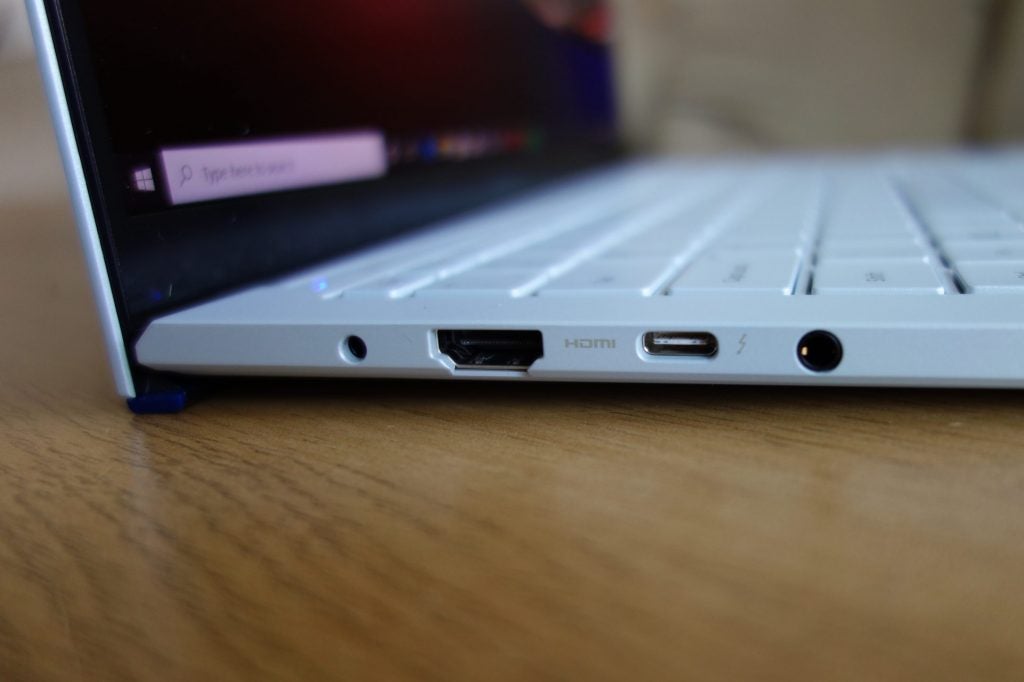 The Galaxy Book Ion flaunts a great offering of ports, with Thunderbolt 3 (USB-C), 2x USB-A, HDMI and a headphone jack all along for the ride. You even get a Universal Flash Storage and microSD combo here, which is pretty rare on an ultrabook these days.

You’ll find two side-firing speakers on the rim of the laptop, which can be cranked up to bellowing decibel levels. Audio quality is fine for music and video playback, although you’ll want to don some headphones for bass-heavy tracks.

The Samsung Galaxy Book Ion excels in many areas that rival manufacturers struggle, yet infuriatingly trips up on some of the basics. The keyboard is a prime example, showing very shallow travel which makes for an uncomfortable typing experience.

The Ion’s keys feel similar to previous generations of the MacBook. Apple has since realised that the shallow switches weren’t a popular design, and traded them for the more crunchy scissor switches. Samsung is unfortunately still persisting with them, which could well turn off those planning to frequently write word-heavy essays. The fingerprint reader is a welcome addition and in an easy-to-reach location, but its current position unfortunately means the arrow keys have been squashed in half. That’s not a significant issue, but no doubt a pain for those who use them regularly.

The trackpad is faultless, with a smooth feel, wide size and pinpoint accuracy. You can even double it up as a wireless smartphone charger (with compatible devices), although it only works when the keyboard is deactivated which limits use. Still, I found it handy to charge my Galaxy S9 while watching Netflix.

Samsung has made use of its television expertise with the Galaxy Book Ion, fitting the laptop with a QLED panel. The biggest advantage of QLED over your typical laptop LCD panel is the max brightness, which climbs up to a whopping 443 nits, helping colours to stand out vividly.

Colour accuracy is supreme too, with a 99% sRGB colour gamut coverage, while also hitting impressively high 77% and 93% scores for Adobe RGB and DCI-P3 respectively. This means the Ion’s screen is accurate enough for professional creators, so it’s a shame that it lacks the required graphics performance to edit videos and create animations without issue. 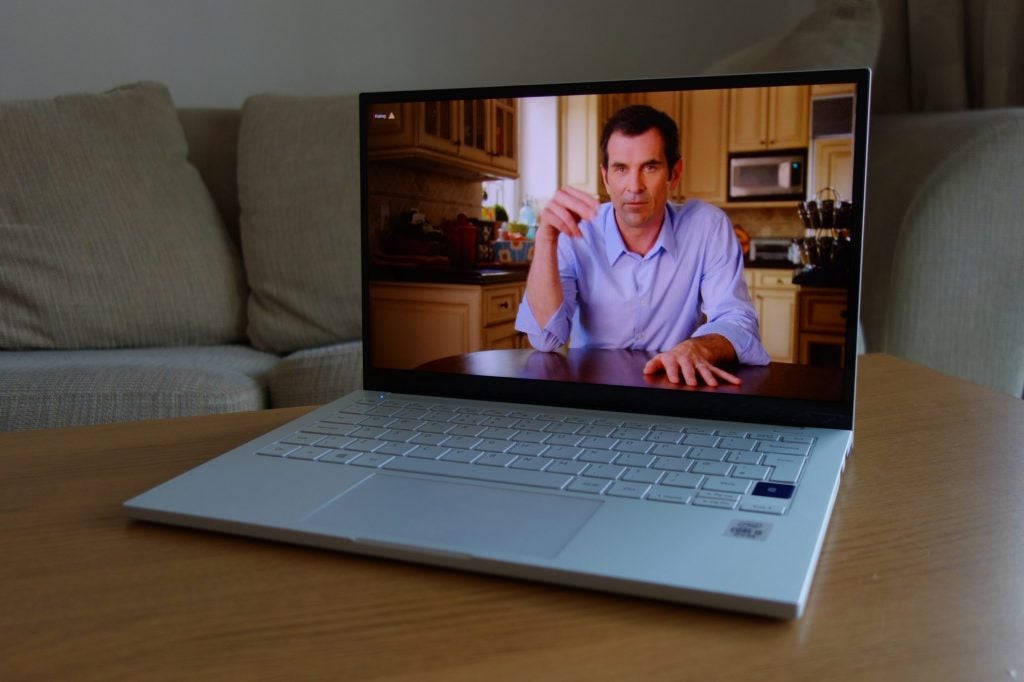 As a device for streaming video content though, the Ion is among the best. It is, however, a shame that the laptop is limited to a 1080p resolution. If Samsung wants to pitch this as the ideal laptop for video streaming, it would have made sense to bump up the display to Quad HD.

The QLED panel can also be accused of being irksomely reflective. It’s only an issue if bright sunlight is being directed at the screen, but it does make outside use difficult. Samsung has installed an ‘Outdoor Mode’ to counteract this though, which can be enabled or deactivated via ‘Fn’ and F10.

Most modern ultrabooks now feature integrated graphics powerful enough to dabble with casual video games and entry-level creation. However, with Samsung opting for an Intel Core i5-10210U processor, it lacks the graphical grunt to perform such tasks.

As you can see in the table below, the 3DMark Time Spy benchmarks shows the graphics performance to be roughly half the strength of the likes of the Dell XPS 13 and HP Envy 13, despite the latter being available for a few hundred quid cheaper.

So while the Galaxy Book Ion excels at portability and battery performance (more on that below) it lags behind similarly priced laptops for graphics performance, so shouldn’t be considered if you have interest in content creation or gaming.

The processor performance is decent though, and easily powerful enough to power through web browsing, video streaming and word processing with no noticeable lag. If you’re sticking to the basics, you can push the Galaxy Book Ion pretty hard.

The laptop can get a little warm, especially underneath, but never to a degree that it became uncomfortable to rest on my lap. The fans generate a faint noise, but it sounds like a distant hum and almost certainly won’t disturb nearby friends or colleagues.

The SSD speeds are superb too, with the Galaxy Book Ion hitting 3426MB/s and 3001MB/s for read and write respectively. I usually only see gaming laptops reach these kind of speeds, which means the Ion is among the fastest ultrabooks for loading and saving data on the drive. You also get 512GB storage, which should be plenty enough for most users.

The Samsung Galaxy Book Ion has an outstanding battery life, reaching up to 14 hours and 40 minutes when running the PCMark 10 battery test simulation and seeing the brightness dimmed down to 150 nits. 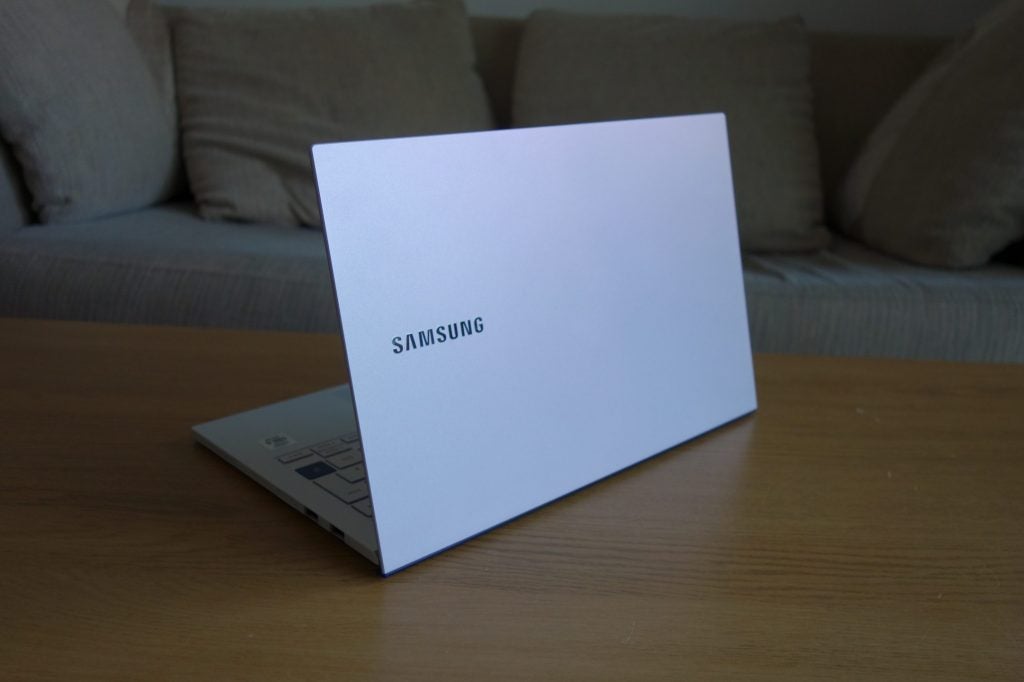 To put things in perspective, most laptop manufacturers aim for around 10 hours of battery life yet usually fall short. The Galaxy Book Ion breezed past that target and kept on chugging for a few extra hours more. This makes the Ion a fantastic option for students who move from lecture hall to lecture hall, as well as office goers who scrap with colleagues over charging ports.

The bundled charger has its own dedicated port on the laptop, although the Thunderbolt 3 port supports power delivery which allows me to use other laptop chargers using the USB-C format.

Should you buy the Samsung Galaxy Book Ion?

The Samsung Galaxy Book Ion is clearly aimed at casual laptop users, with the ultra-portable design, gorgeous QLED screen and outrageously long battery life all appealing to those who just want to browse the web, watch video content and write the odd essay.

The lack of graphical grunt is therefore forgivable. If you want to try your hand at content creation or casual gaming, you’re better off looking at the likes of the Dell XPS 13 (2020) or Surface Laptop 3 instead, but those laptops can’t compete with Ion’s core strengths.

This makes the poor keyboard all the more frustrating, as the likes of students and office goers may well  be put off by the idea of hammering away on these shallow keys day after day. The £1249 price is also steep considering this is a laptop aimed at casual users, especially since high-end Chromebooks are capable of a similar job if you’re willing to forgo Windows 10 and the QLED screen.

Still, if you’re after a laptop that excels at web browsing, video streaming and other basic tasks, and aren’t deterred by the high price, the Samsung Galaxy Book Ion is an excellent ultrabook option.