By default, when you turn on the projector on the Samsung Galaxy Beam it mirrors whatever is on the screen, so you can beam not just videos and images you’ve shot on the phone, but also watch Netflix or iPlayer videos, play games or even display websites.

However, the projector app also has a few extra modes. The Visual Presenter mode turns on the camera and projects anything the camera sees, so it acts pretty much like an overhead projector.

There’s a Quickpad mode that lets you draw notes and annotations over a screenshot that’s being projected and Samsung has also included an Ambience mode that projects a slide show of snaps or animations while playing back music. 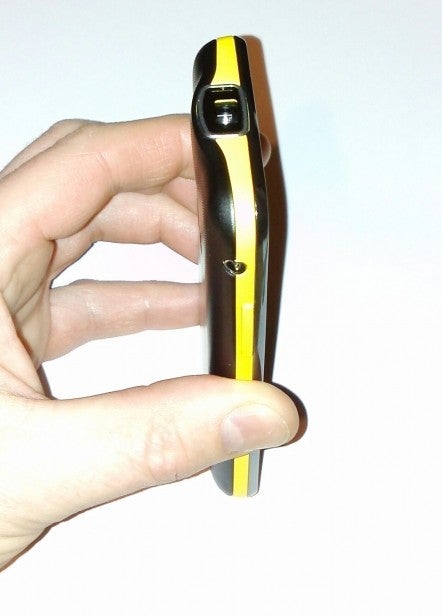 You can also used the projector as a torch and even set it up so it projects upcoming appointments when an alarm goes off. The only slight oddity is that you can’t use the projector while GPS is actively seeking a position or has a lock. No explanation is given for why this is the case.

The projector has a resolution of 640×360 pixels, so it’s standard definition rather than HD, and its brightness is rated at just 15 lumens. By way of comparison, home cinema projectors typically have a Full HD resolution of 1920×1080 pixels and a lumens rating of 700 to 2,000. 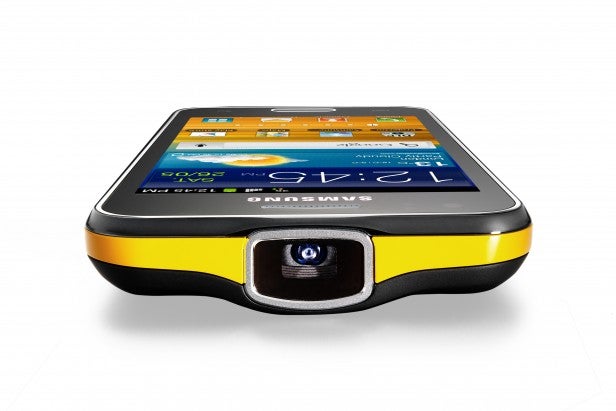 What this means is that in a reasonably bright environment you can only project a relative small image before the brightness levels tail off to such a degree that the image appears too washed out to watch. However, in a darker environment, such as a bedroom with dark coloured curtains pulled closed, or at night, it actually produces a surprisingly bright image for such a tiny beamer. Do bear in mind, though, that it suffers a bit from quite grey and misty black levels, so moody noir-ish thrillers don’t look great on it – it’s much better for watching bright and cheery stuff like sitcoms and animation movies, simply because it does a better job of projecting bolder, bright colours than darker hues. And while Samsung says the maximum size you can project is 50inches, this is not actually true. You can project much larger images without the projector losing focus – it’s just that its pictures start to look more washed out the larger you try to project them.

Battery life isn’t too bad either. You’ll get between three and four hours out of it just for playing video from onboard memory via the projector. If you’re trying to stream from Netflix or iPlayer over Wi-Fi at the same time as using the projector then you can expect that to drop a bit. Samsung helpfully provides two batteries with the phone as well as an external battery charger pack, so you can charge one battery while using another. The battery charger pack also acts as a stand for the phone, so you can stand the phone in it and project an image onto the ceiling of your room. 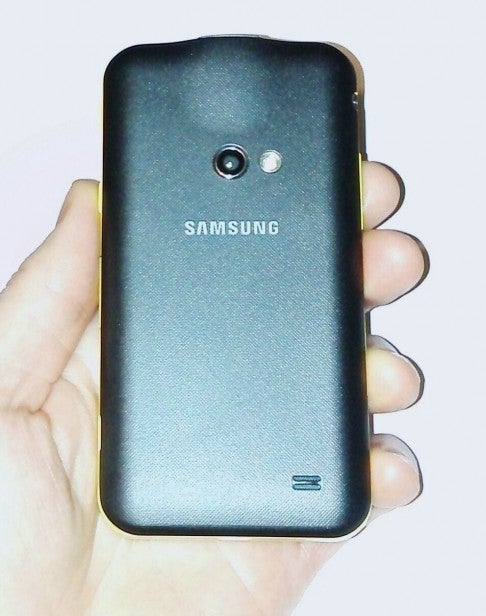 The Galaxy Beam is less successful when judged purely on its phone abilities. It’s powered by a 1Ghz dual core processor and has 768MB of Ram in which to run apps.  The problem with this spec is that it’s a little bit underpowered when you consider the handset’s high price.  There are similarly priced Android phones available on the market with quad core processors and bigger screens. It’s also annoying that it runs the ageing V2.3 version of Android. Samsung does say that it’ll be updated to Jelly Bean, but it hasn’t given a specific date for this yet.

In terms of performance it’s not too bad. It doesn’t feel as slick and smooth to use as the latest Jelly Bean handsets, but it’s not dog slow either. In the Egyptian Classic test in GLBenchmark it managed to reach 40fps, while in Lin Pack it returned a score of 65.963MFlops.  Its performance in Browser Mark wasn’t quite as impressive as it posted a score of 1314, while it completed Sunspider in 3208.3ms.

Samsung has penchant for using AMOLED displays on its phone, but for the Beam it’s gone with a traditional LCD TFT display instead. It’s a 4inch screen and has a resolution of 800 x 480 pixels, which is perfectly passable, but not exactly earth shattering on a £400 phone. Nevertheless, it is bright and colours look bold and strong. 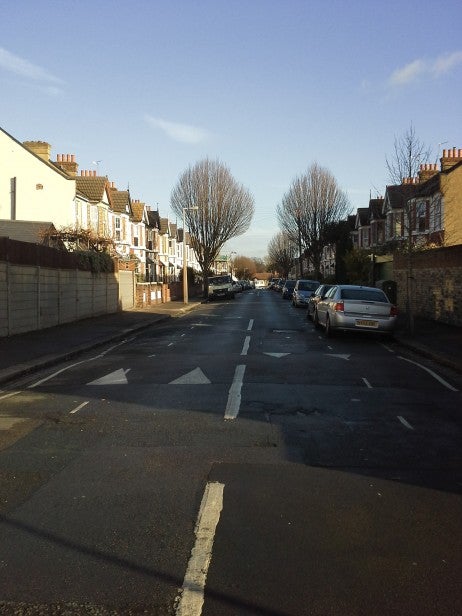 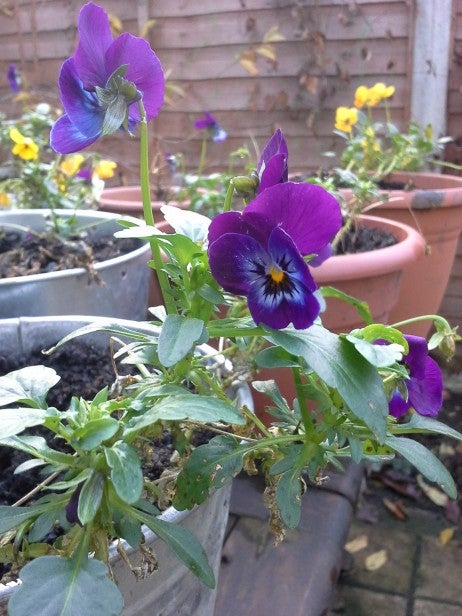 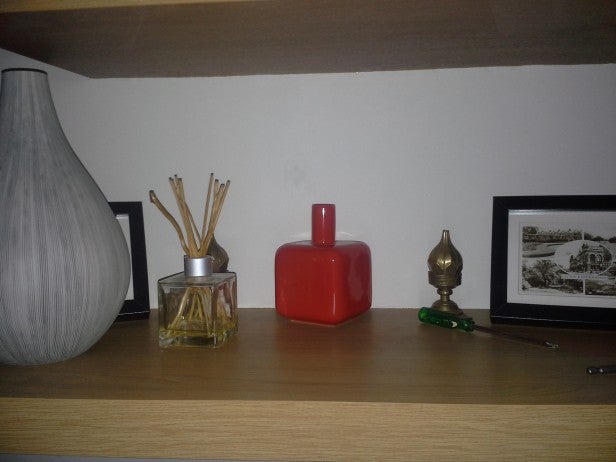 The camera is a bit ho-hum for such a costly phone, though. The 5mepgapxiel snapper performs reasonably well outdoors under good lighting conditions, indoors it tends to struggle even in medium lighting conditions unless you call the LED flash into play. 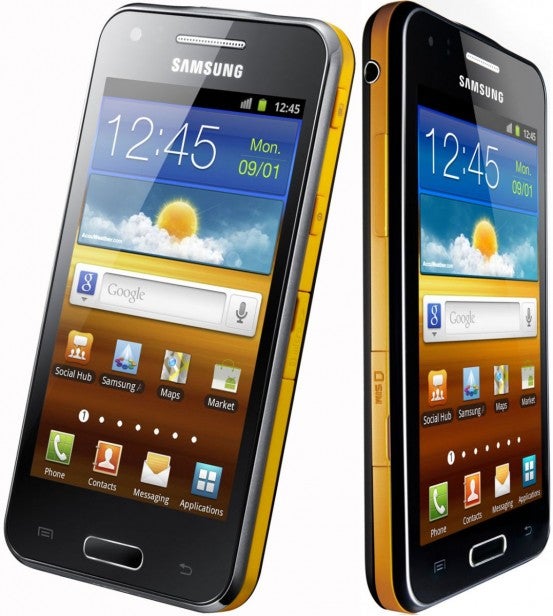 For calls, the Beam is a pleasure to use, thanks to it crisp and loud earpiece. And while the projector places a big strain on the battery, when you’re not making use of the beamer the phone’s battery life is actually slightly better than normal, probably because it relies on a larger 2,000mAh pack. You’ll definitely get at least a day and a half out of it for pretty normal day to day usage.

Verdict
The Galaxy Beam is a pretty difficult phone to sum up. The projector is a brilliant addition and works surprisingly well, but the phone side of the device is a bit of a let down as it’s slightly underpowered for the price and comes running an older version of Android. If it’s mainly the projector bit you’re interested in then you may think it’s worth the money, but if you’re primarily looking for a speedy, high-end phone and will only use the projector occasionally then it’s probably best to look elsewhere.