The Galaxy Ace 3 runs on Android 4.2.2 with Samsung’s TouchWiz UI overlaid on top, so it’s not the latest version of Google’s mobile operating system and we don’t expect it to get bumped up to Android 4.4 KitKat any time soon. What you do get is a clean and a relatively user-friendly approach to Android, even if sometimes Samsung’s changes feel a little overcomplicated compared to stock Android.

Frustratingly the Ace 3 doesn’t adopt all of the best Android Jelly Bean features, either. You do get the standard five homescreens and access to Google Play, but there’s no app folders and launching Google Now is not as simple as swiping up from the bottom of the screen as on the Nexus 5, for example. 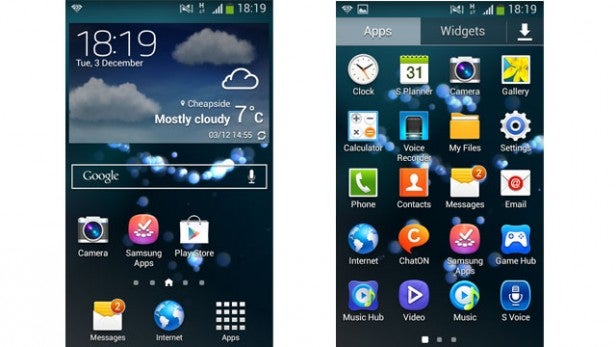 Samsung includes some of its own unique features to help less tech savvy owners get to grips with the handset. The most notable addition is the Easy Mode home screen that strips back the UI including the camera UI using just three homescreens, much bigger icons and shifting third-party applications into the app drawer.

If you love apps, the simplified homescreen is not going to be for you, but it’s very easy to switch back to the standard look and be just the thing for someone who doesn’t need all the features Android offers. 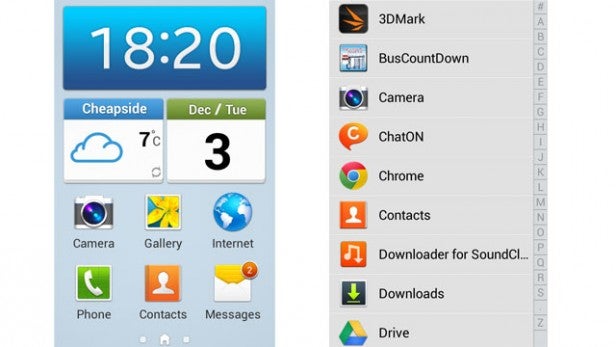 It wouldn’t, of course, be a Samsung phone if the Ace 3 didn’t have its fair share of additional software to eat into the 8GB internal storage that’s actually around 5GB when you see what’s required to run the phone. You do get 50GB of free Dropbox cloud storage, however, and unlike the Moto G there’s a Micro SD card slot for expanding the built-in memory.

Native applications on board include S Planner, ChatON, Game Hub, Reader Hub, S Voice, S Translator and Samsung’s own app store. They all vary in terms of usefulness but you are likely to ignore or ditch a lot of them for better alternatives found in the Google Play store. Thankfully, Google’s own apps are pre-installed including Gmail, Play Newsstand and Play Movies & TV to redress the bloatware balance. 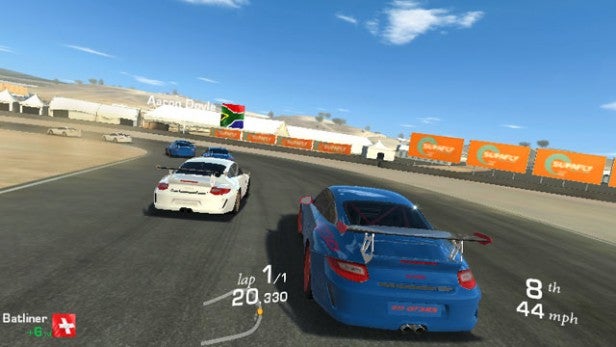 A screenshot of Real Racing 3 running on the Ace 3

The Ace 3 runs on a 1.2GHz dual-core CPU with 1GB RAM, which falls in line with most similarly priced phones aside — the Moto G being the exception. For basic tasks like navigating homescreens and running basic apps it’s more than suitable, but when performing tasks that demand more power like running multiple apps at once or playing more graphically demanding games you begin to see it struggle.

The Ace 3 CPU produces a 736 multi-core score in the Geekbench 3 benchmark test, making it slower than the quad-core Snapdragon 200-powered HTC Desire 500 (834) and significantly worse off than the Motorola Moto G (1155) that runs on a quad-core Snapdragon 400 CPU. It compares better to other dual-core phones like the Xperia M (625) and LG L7 II (421), but clearly it lags behind the better phones in the price range.

In the 3D Mark Ice Storm Unlimited benchmark gaming test it scores a 4,001 which is higher than the Desire 500 (3,100) and the LG L7 II (2.290). It by no means a more superior handset to play games on, but the bottom line is it will run games like Real Racing 3 and Dead Trigger 2 with some very minor framerate issues and graphics that lack the visual gloss usually seen on more expensive phones.