The Galaxy A90 5G is a very competent 5G phone that ticks all the right boxes when it comes to hardware and functionality. The design is a little bland, but it has all the graphical grunt you’ll need to play the most demanding games on Android and the screen remains one of the best you’ll find on a phone this price. The camera isn’t industry leading, but it’ll do the job for most people.

The Galaxy A90 5G is Samsung’s opening shot to make an “affordable” 5G smartphone that a regular person can actually afford.

But with pricing still set at well over £600 it’s still hardly in Moto G territory and sits in a fairly awkward segment of the market, and 5G is still a young technology that only works in select areas of the UK and contracts are currently extortionately expensive.

I personally can’t see why people willing to pay an arm and a leg for a 5G contract, despite its current shortcomings, would be concerned about saving a couple of hundred quid on their phone – but the Galaxy A90 5G is a competent device if not the best phone around. 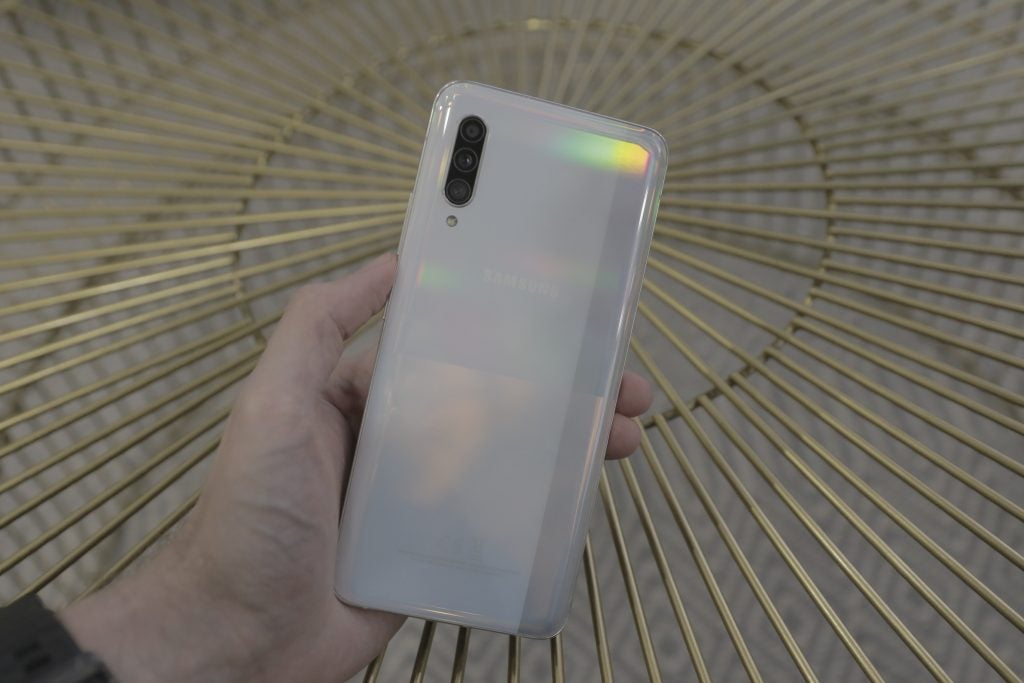 Unlike the Galaxy S10 and Galaxy S10 5G, the Galaxy A90 5G looks fairly similar to its vanilla 4G sibling of the same name. This means it’s nice looking, but far from unique.

It has a mixed metal and glass design, with slight curved sides on its back, a USB C charge port and speaker on its bottom and dew drop notch camera housing on its front.

It also features an under screen fingerprint scanner that works about as well as it does on the sea of other phones with the tech. Cliff notes: it works for the most part, but will struggle in even moderately damp/rainy conditions.

If that sounds familiar it should. The description could be paired to numerous other phones this year – honestly if you stripped the branding off I think a lot of people would struggle to tell the difference between the A90 5G and Huawei P30 from earlier this year.

The only design feature differentiating it from the competition is its atypical dual tone back, which I’m not a huge fan of.  I’m also not convinced it would survive an accidental encounter with a pavement crack free, but it does feel well made. This is also a concern I have with most 2019 flagships.

Thankfully, it does tick all the right boxes when it comes to functionality, however.

The 6.7-inch, FHD+ resolution, Super AMOLED display lives up to Samsung’s stellar track record with mobile screens. Powering it up colours instantly look full of life, without being overcooked. A fact backed up by its out of the box 6408 kelvin colour temperature, which is a hair’s breadth away from the 6500 kelvin ideal, I detected during testing.

The 0.00 black level means blacks are about as deep and inky as you’ll get on a phone. This plus the 363 nits max brightness I recorded means the video and games look wonderfully vibrant and offer a suitably immersive viewing/playing experience.

The only downside is that it’s colour gamut coverage isn’t up to snuff for serious creative work or photography. The 99.6% sRGB coverage is excellent, but 68.8% Adobe RGB and 71.1% DCIP3 coverage is a little on the low side. But, as I’ve said 100 times before, I can’t see this being too big a deal as no artist of photographer is going to want to do serious editing on a phone this size without a stylus. Even then mobile camera tech is too limited for even semi-professional purposes. 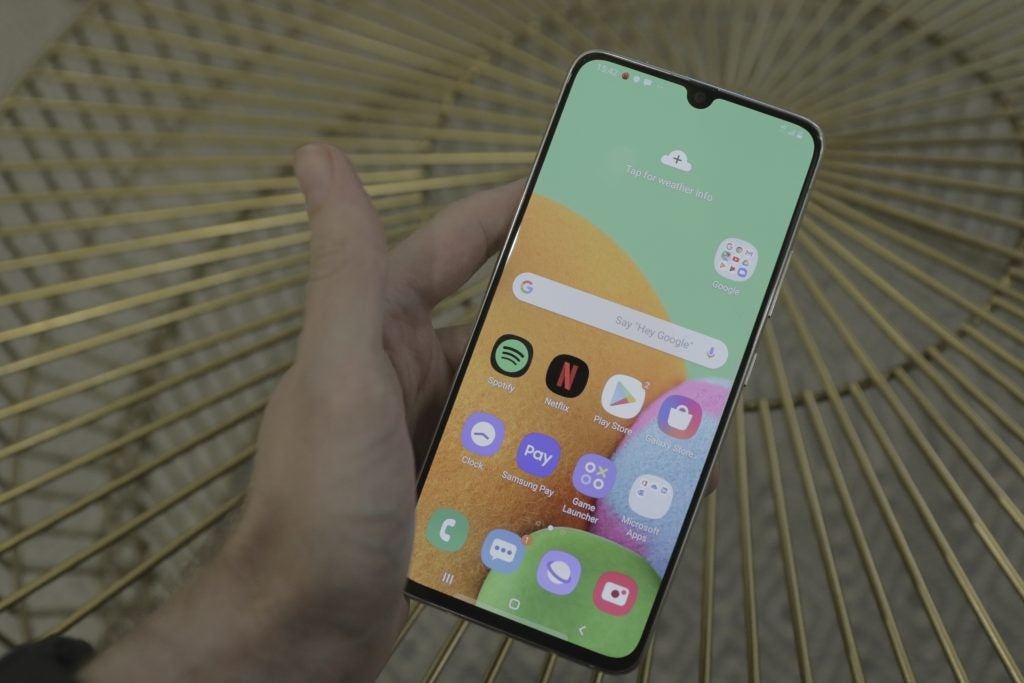 The key selling point of the phone is its 5G connectivity. Though, globally, there have been cheaper 5G phones, the £669 SIM-free price makes the Galaxy A90 5G one of the more affordable options for early adopters in the UK at the moment.

Powered by the same Qualcomm modem as the Galaxy S10 5G the phone’s data speeds are excellent, if you happen to wander into an area where the tech is actually running. This sounds cool, but be warned there are still on a very limited number of cities with active 5G networks. Even within them, the number of locations where you can actually get the connectivity is incredibly limited.

Using the Galaxy A90 5G I never once accidentally got 5G connectivity, the only time I got to enjoy it was when I intentionally headed to King’s Cross, an area where it’s active, to a spot I specifically knew had it. While it was nice to have a bonding moment with the other early adopters who where playing the same hunt the 5G signal game with their new phones I was, it does make me question if making the switch from 4G is worth it for most people at the moment.

Most industry forecasts suggest the tech’s not going to overtake 4G and become standard for around another two years, so be warned; if you’re going to make the jump now you will be a very, very early adopter. 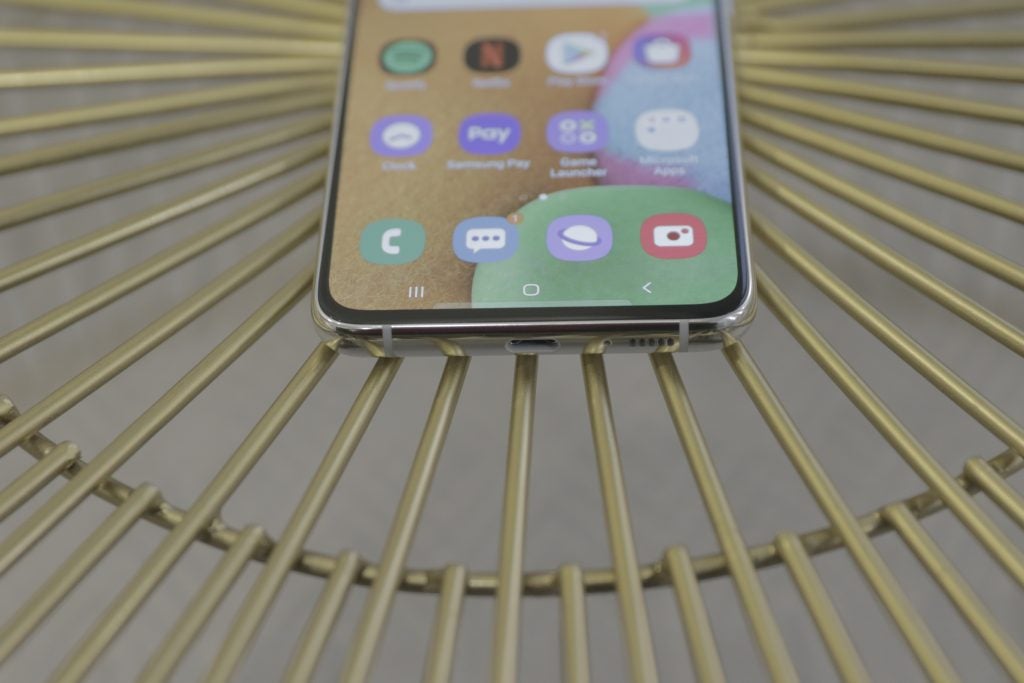 Under the hood things are also pretty impressive. The Qualcomm Snapdragon 855 CPU was flagship-level a few months ago and when paired with the phone’s 6/8GB RAM options is more than good enough for 3D gaming, lightweight photo touch up work and pretty much anything else you’d want to do on a smartphone.

During testing I never had any issue with the phone’s performance. The Galaxy A90 5G’s synthetic benchmark scores, which judge a phone’s performance by running it through a series of stress tests, mirrored my real world experience. You can see how it compares to the full fat Galaxy S10 below.

Galaxy A90 5G camera – It doesn’t match the Pixel 3a, but it’s still quite good

This phone continues Samsung’s 2019 run of making good, if not the best camera phones.

The A90 5G comes with a fairly by the numbers triple-sensor setup that combines 48-megapixel (main), 5-megapixel (depth) and 8-megapixel (ultra-wide) parts. The addition of an ultra-wide is a nice touch that’s much more useful than the telephoto third sensor you see on many competing phones. With real world use I found the snapper is more than good enough for most users. Photos taken with the main sensor in regular light looks sharp enough, have decent contrast and aren’t overly sharpened.

The only minor quibble I have is that the 12-megapixel shots taken on the main snapper can look a little over-processed. This is particularly noticeable in landscape and cityscape shots, but this is an issue that’s common to Samsung phones and a touch some people actually like. I’m just not a big fan personally.

Portrait shots are also fine. Photos taken in the portrait mode feature reasonably realistic bokeh effects, where the foreground is in focus while the background is blurred. The only time you’ll have issues is if you blow up the photos on a big screen. Here, like all phones, you’ll notice some blurring and anomalies around the foreground subject matter’s edges.

Low light is the only area the A90 5G seriously lags behind. It is capable of taking better low light shots than many “mid-range” phones, but it fails to match the quality of the Pixel 3a and Huawei P30. Low light photos are usable for sharing on social media, but they look noisier and slightly less polished than those taken on the Pixel and Huawei.

It’s a similar story with the 32-megapixel front camera. The camera is good enough for snapping selfies in regular light and taking and making video calls, but image quality rapidly drops in dim conditions.

You can see a selection of photos taken on the Galaxy A90 5G below. 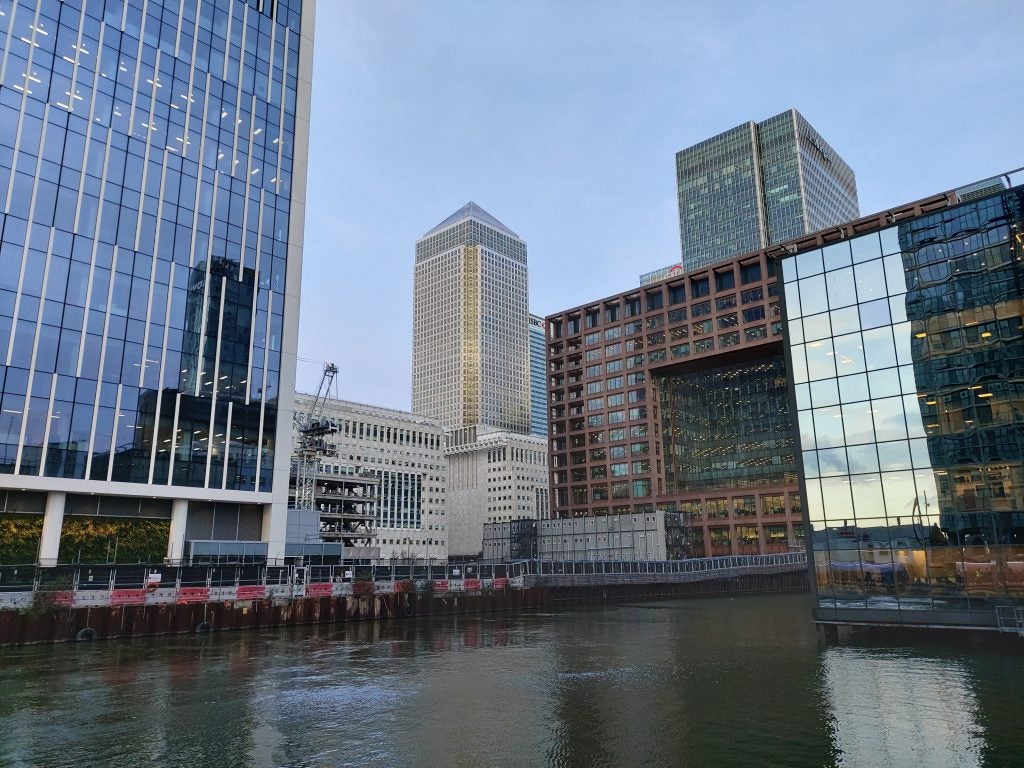 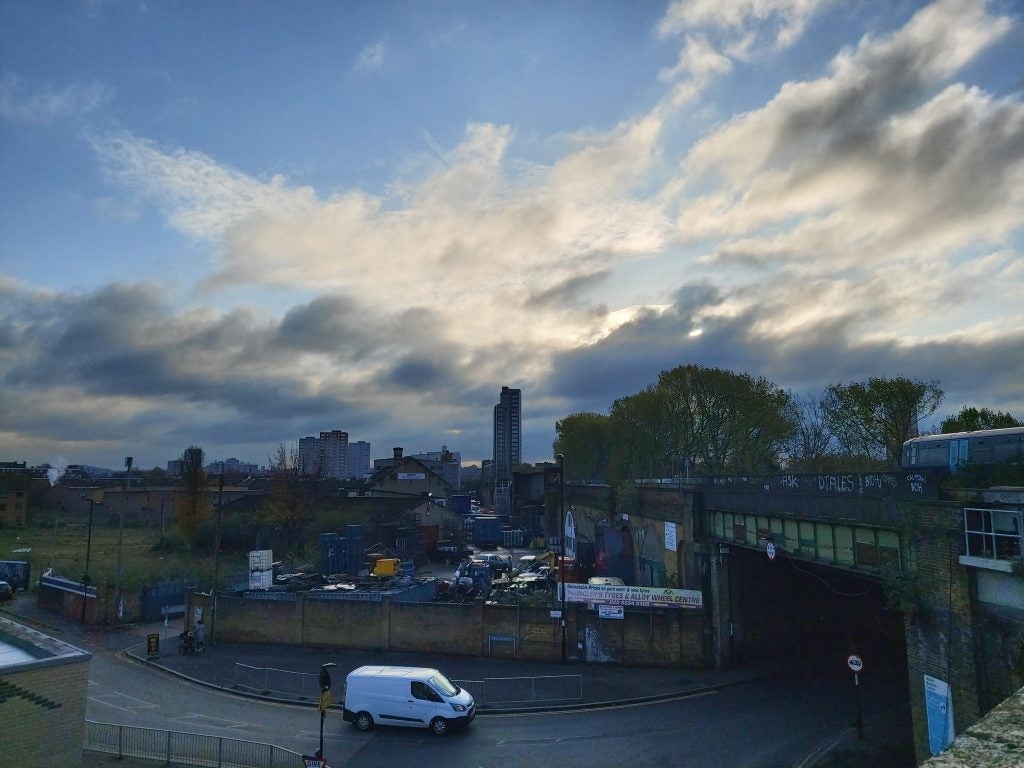 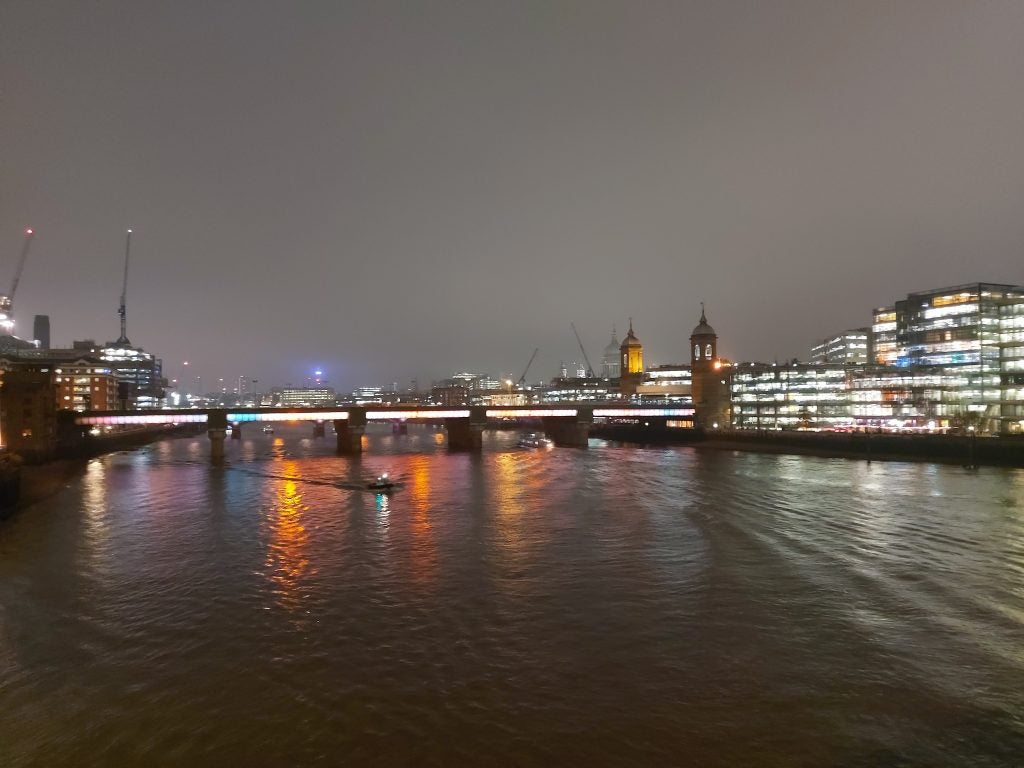 Galaxy A90 5G battery life – It’ll see you through a day, but that’s it

The phone’s giant 4500mAh battery is on paper excellent and one of the biggest you’ll find on a mainstream smartphone. With regular use the Galaxy A90 5G’s battery life is reasonably good.

Using the A90 5G as my main work and personal phone I generally got a full day’s use out of it. This entailed listening to music on my morning workout and commute to and from work, checking and responding to incoming emails and messages throughout the day, sporadic web browsing, the odd game of PUBG and an hour or two’s video streaming in the evening.

It also dealt with demanding processes ok. Video streaming with the screen set to 150 nits brightness, the level most people will feel comfortable, the phone discharged an average of 5-9% of its charge, which is solid by today’s standards. Gaming told a similar story, with the A90 5G discharging around 12-15% of its charge per hour.

But things get a little dicier if you take advantage of its key selling point, 5G. Downloading series from Netflix with an active 5G connection I saw the battery take a huge hit and it eeked through 8% of its charge in 15 minutes. 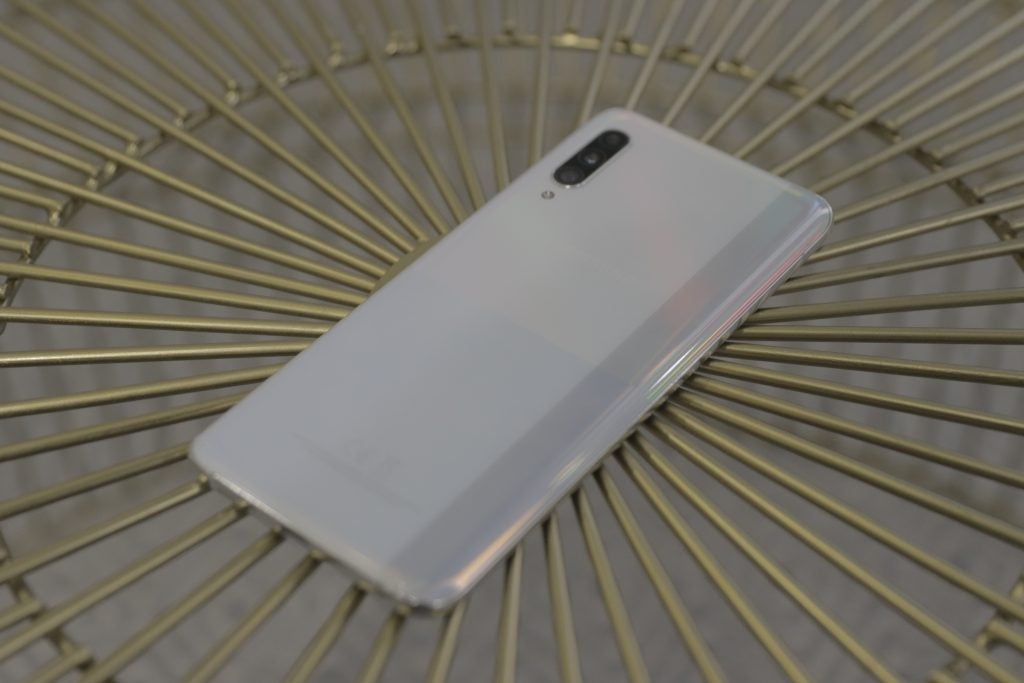 The Galaxy A90 5G is a very competent 5G phone that ticks all the right boxes when it comes to hardware and functionality. The design is a little bland, but it has all the graphical grunt you’ll need to play the most demanding games on Android and the screen remains one of the best you’ll find on a phone this price. The camera isn’t industry leading, but it’ll do the job for most people.

But it isn’t hardware that’s holding the phone back. 5G is still a very young technology that only works in a select number of areas. This plus the hefty upfront cost of 5G contracts makes me question if there is a market for mid-range 5G phones at the moment. The Galaxy A90 5G feel a little ahead of its time as a result.